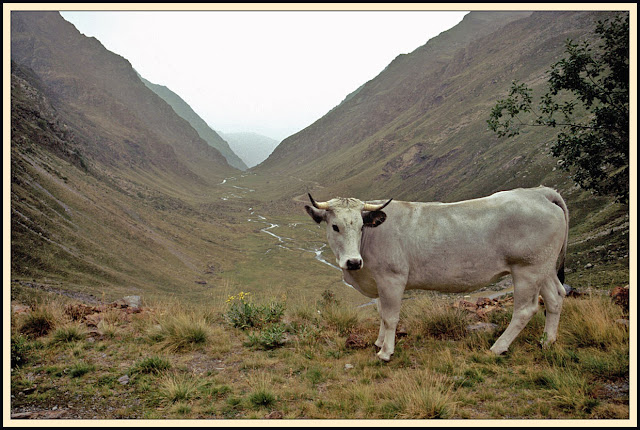 Sue and Martin's Big Adventure
Day 42 - Sunday 5 September 2004 - Stage 34
Postcard Summary
Fishermans Camp to El Serrat
Into at last for beer and ski resort lunch (supplies low) – 6.0 hours, 12 km, 800m ascent
Today, another hazy sky.  The morning involved a descent, then a climb to the Port de Rat – out of and into .  The view of ski lifts was rather ugly, but an open restaurant provided us with cheese baguettes and salad – a good alternative to tins of fish!  We see lots of tourists walking the short distance to three scenic lakes, then we lose them when the descent gets steep.  Now enjoying beer, crisps and a valley view from the terrace of Hotel Tristiana, clean after a good bath.  Only one more day until a day off in Soldeu. 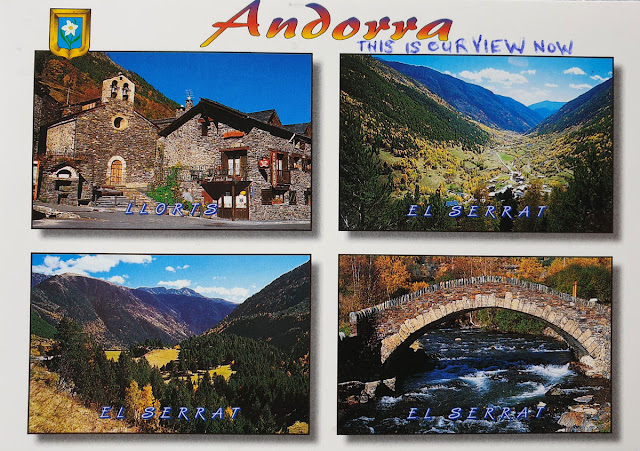 Diary Entry (by Sue)
After not an especially good night's sleep (bad pillow, sheep bells, gusty, too hot), I managed to miss both alarms (due to ear plugs), and woke with Martin suggesting a weather deterioration. Although the same high cloud was present, the pressure had fallen and the temperature had risen to 16°C. Delayed start due to toilet stops for both of us, but then we had a good run. Leaving our lake, a path descended, then contoured around the end of a very hazy valley, to meet a dirt road. (See top picture for the view down the .)
Not long on this gentle gradient upwards before our path is signed with and yellow marks. We climb steadily, stopping once for mountain mix, to reach the Port de Rat at 2540 metres. 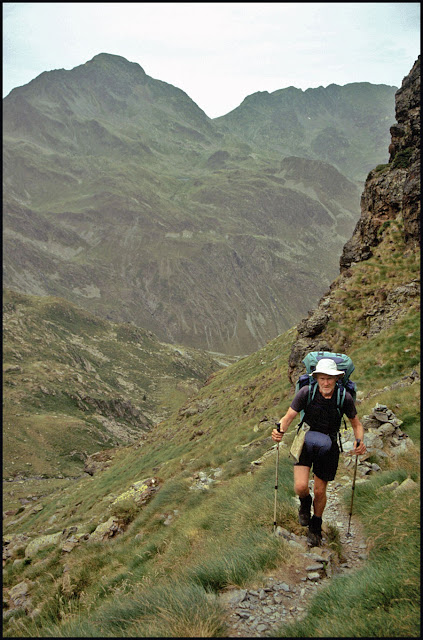 Ascending to Port de Rat
Two large cairns mark the border, and a fairly big landmark for us - we've reached (11 am).
The view is of ski lifts and pistes, and newly sown grass, but the advantage is that the Restaurant La Coma, by a large car park and a chairlift, is open. Although only 12 ish, we welcome a lunch of cheese baguettes and a plate of salad, with a tin of coke. 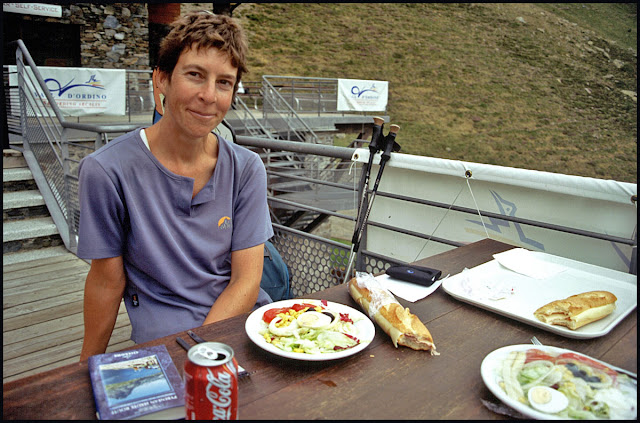 Leaving there, the path rose steeply for a short while, and it was soon clear why everyone and his dog were heading this way. Over a brow, and three lakes lay below us, very easily accessible from the car park. But, as usual with the HRP, we leave the tourist spots quickly, and after the lower lake, we saw no one walking.
A steep descent followed, where care was needed, with a rather scary crossing of a dam at the bottom, over which water was running (Martin avoided this by crossing the stream higher). Then, a section of ski piste, one of old road, one of new road, and one of track, and El Serrat appears. 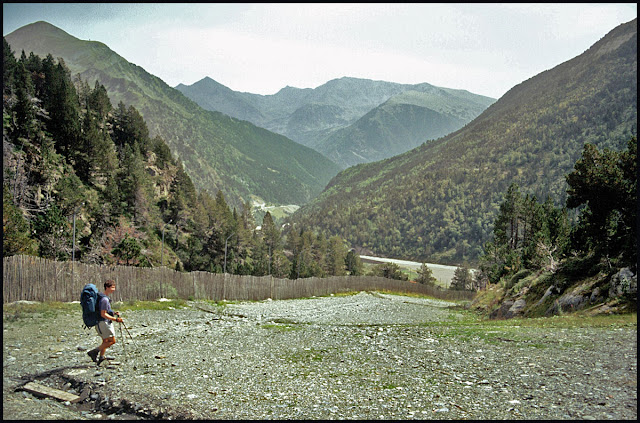 A ski piste above El Serrat
It was hot (28°C) and sunny on this section, so no real change in the weather. El Serrat only has hotels and no shops, so we book into Hotel Tristaina, without finding out the cost for a night's half board, and immediately swing into the hotel / early finish routine (2.45 pm) - washing, baths and airing sleeping bags. Once these chores are done, we can adjourn to the terrace bar, for a beer, crisps and a few postcards. The swifts fly around this lofty location, and the hazy sun shines on our view both up and down the narrow valley, lined with pines.
We are their only customers for dinner at 8 pm, so we sit in the bar, instead of the restaurant, along with only one other customer - a small man who doesn't remove his hat and who drinks red wine and watches the blaring TV! Dinner is an ordinary salad, pork (M) and sausage (S) with chips and veg, and apple cake (S) and lemon mousse (M) for pudding. The waiter makes an excellent effort to describe the choices in English, more accurately than the 'English speaker' at the Graus campsite. Bed is around 10 pm.
Stats and route (Viewranger):
13 km, 680 metres ascent, 6 hours 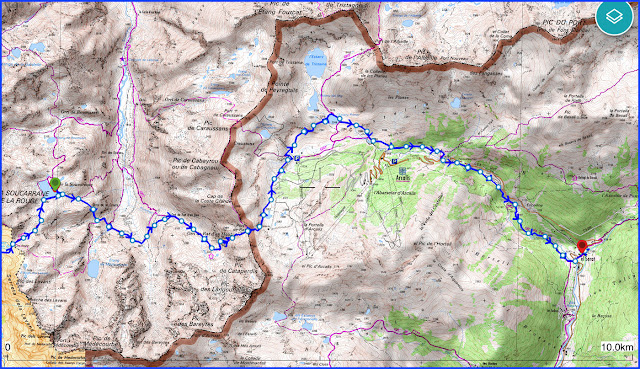 I reckon you were getting pretty fit by now.