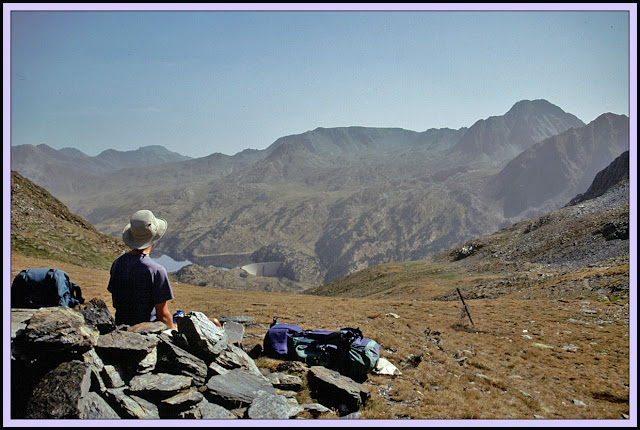 
Splendid ascent of Pic Carlit (2921m).  Hot, sunny, hazy – 9.0 hours, 20 km, 1400m ascent
A lovely walk up and down Pic Carlit, the highest peak in the .  More people around in this pretty area with lots of lakes, but the countryside is opening out and we are clearly entering lower areas.  Martin fell over and grazed his shin, but luckily nothing is broken!  Even had some gentle sections today – a sign of things to come?  Not a cloud in the sky – made for a hot walk. 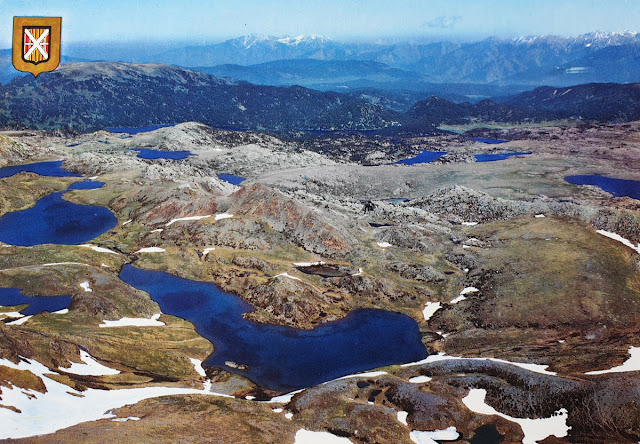 Diary Entry (by Sue)
Our last (but one!) big obstacle today - Pic Carlit at 2921 metres in beautiful weather - it's been a superb day as we now sit in the bar of the Refuge des Bouillouses and rest!
In our hotel this morning, we were somewhat premature for breakfast, which eventually materialized at about 8.30. There is a '' ambience here - the coffee ran out, the toaster didn't toast, and when we came to leave, they only accepted cash. (9.15.)
It was a beautiful morning - a clear sky and slightly hazy views. A track climbed gently away from the col and the road, and we were soon sweating in the still air. After an hour, a stop by a shepherd's hut for water and to apply suntan cream. The track was left for a flat area that soon turned into a path that climbed through pines initially, on the bank of a stream. Then, up grass to the de Lanous and a new view - of a large lake and dam, and to Pic Carlit. (See top picture.)
Refuelled by mountain mix, we descended a good path to the bottom of the dam, where a 900 metre ascent started. Despite the heat, it was a nice path, winding beside streams and over rocky sections. We saw our first marmot for ages during this climb - he soon made off to his hole. It was sweaty work again.
Lunch at the Étang des Fourats, a small green lake at 2457 metres. A brew was welcome with the last of the bread and usual pâté and fish. Martin refilled water bottles, and we watched people ascending the 'intimidating west face' of Pic Carlit just above us. 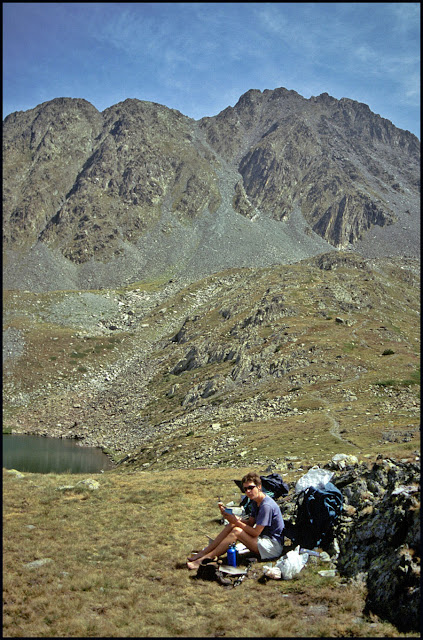 In the scree, a zigzag path was evident, and tiny figures were on the top nearly 500 metres above us. In fact, it was not too bad, and it took 1 hour 5 minutes, rather than 1 hour 15 minutes as both guides suggested. The strategy was 'slow and steady', and although steep, the path was good. The view from the summit was a surprising one. Below were blue lakes, but more significantly, the terrain was pine covered rolling hills, with a distant ridge - the big hills are left behind. 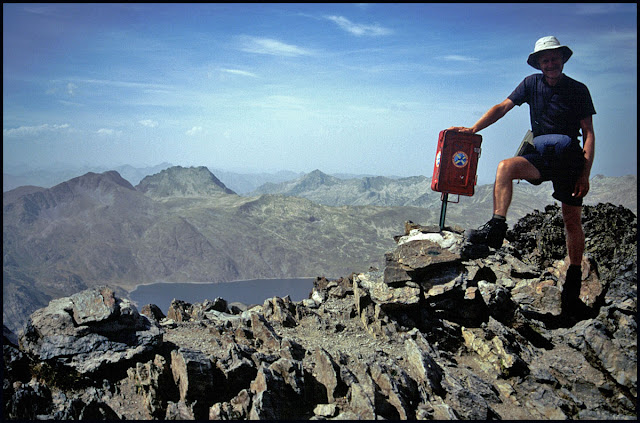 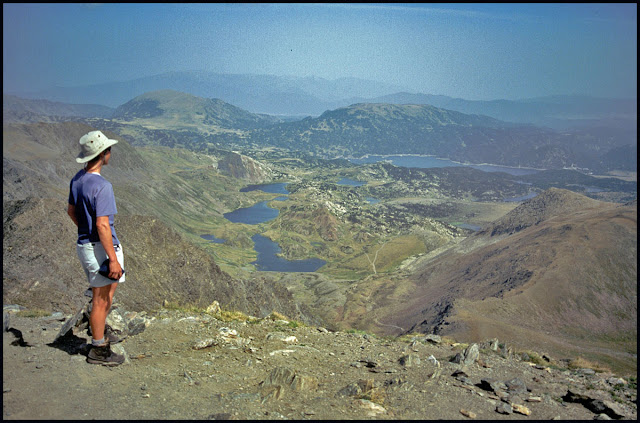 An eagle was flying around the summit, and there was a small grey friendly bird on the summit itself.
After a good snacking on chocolate, the descent - first steeply down scree, then scrambling down a ridge. Interesting with poles in hand! The lakes became closer, and were reached after a rough stony section. We both enjoyed the path from here - gently descending, then an area of blue lakes and pine covered slopes - reminiscent of . 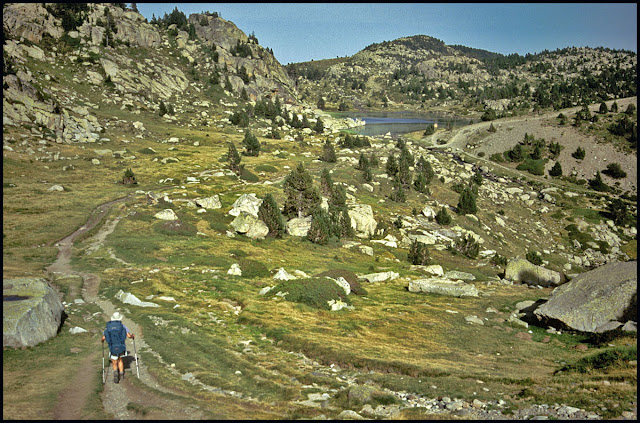 There were a few folk around, including a Dutch man who started the HRP on 4th June and had tried to have a discussion with the author of our guide - Ton Joosten, but he wasn't helpful. Soon afterwards, sand on a rock caused Martin to slip, removing the skin on one of his shins, but luckily nothing worse.
The path emerged next to the large Lac des Bouillouses. 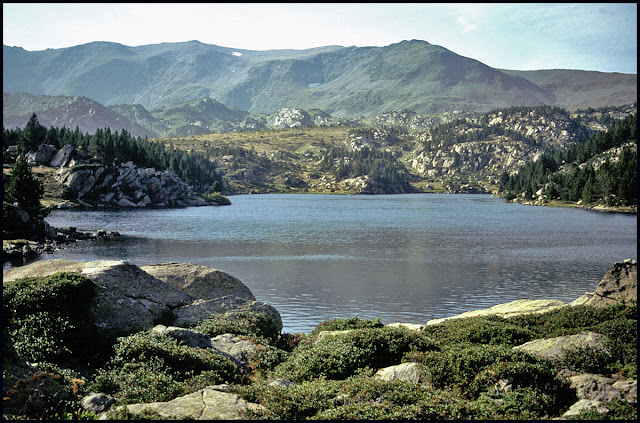 We crossed the dam. Still lots of people and cars here in the early evening sun. No problem getting a bed in the Refuge (arrived ~ about 6.15 pm), and just time for a shower before dinner with an English couple at 7.15.
The temperature rose to 26°C today, which felt hot with so little breeze, but it was a pleasant 21°C when we finished. The guardian of the refuge is an older, bearded man with a smiley face. He maintains the refuge in a 'spic and span' sort of way and provided a good dinner - carrot soup then tomatoes and black olives with a nice dressing, then an omelette and fried potatoes. Crème brulée for pudding was good too. Ironic that we should be paying half what we did in (Hotel du Col)! To bed in a half full dormitory for ten, at 9.30 pm. The refuge is at 2005 metres.
Stats and route (Viewranger):
20 km, 1400 metres ascent, 9 hours

Probably the most evocative set of photos so far, especially when "click to enlarge."