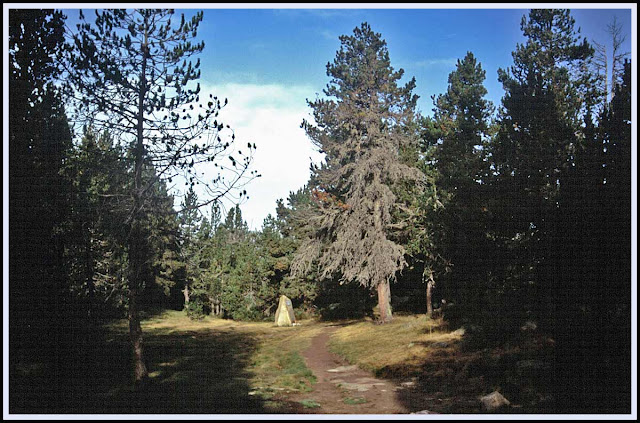 Sue and Martin's Big Adventure
Day 47 - Friday 10 September 2004 - Stage 38
Postcard Summary
Friendly refuge to
A morning of lakes and pines, then high plateau before fine ascent through trees – 8.7 hours, 20 km, 600m ascent
Another lovely sunny hot day and a scenic start past lakes nestling in pine woods.  A few ski pistes to negotiate before we arrive in the .  Good to visit a large French supermarket, but the rucksacks felt heavy afterwards!  Once the new housing estate was negotiated (during which Martin tripped on a kerb and fell over again), we stopped for a sumptuous lunch.  A twisty route across fields of cut hay took us eventually to Eyne, from where a climb through woods led to a fine wild camp by a stream. 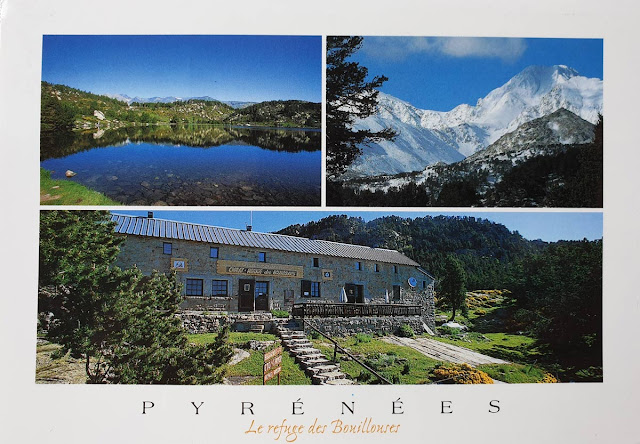 Diary Entry (by Martin)
We rose to find that our breakfast was neatly laid out and our attentive guardian soon served a big pot of tea for Sue and a similar size pot of coffee for me. Nobody had snored (house rules forbade it) - house rules also forbade getting annoyed with anyone who does snore! - so we had slept pretty well.
After chatting to the English couple we got away at 8.40 after noticing a sign at the Refuge for a 4-day circuit, staying at refuges, which looked very scenic. (It went to the .)
I wore trousers (legs) today so as to avoid getting my injury dirty - it has dried out quite well, and it was a trainer day for both of us - no rough ground.... - well, not a huge amount! We wandered off in the sunshine at a pleasant 19°C, past a herd of very noisy cows to some lakes in a pine tree setting - very like a miniature (). 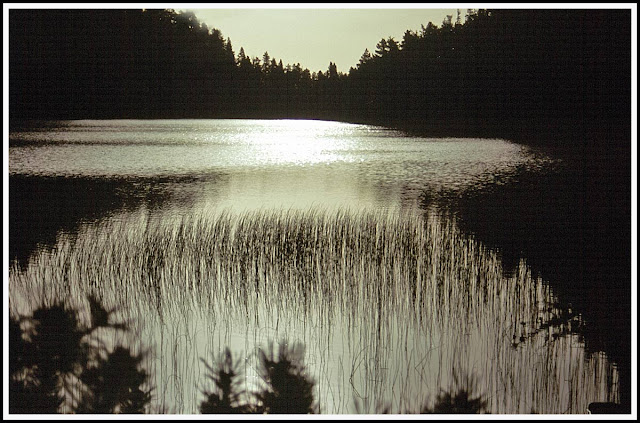 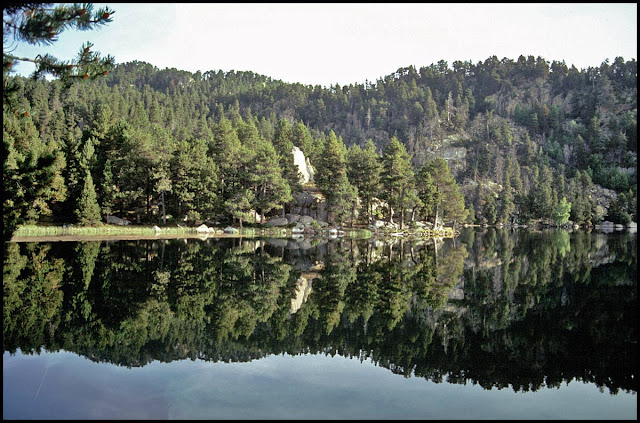 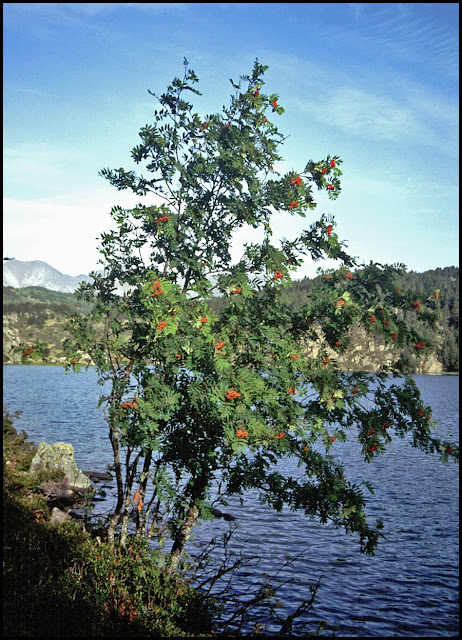 There were dragonflies and ducks and leaping fish. Yesterday's Dutchman was passed at 9.30, still slumbering in his tent - we won't see him again. By 10.40 we were at Col du Pam - 2000 metres, having descended all of five metres. This called for a mountain mix stop, after which we descended on a sometimes pleasantly contouring path through trees - other times messing about on rough steep tracks and roads - to Font-Romeu. 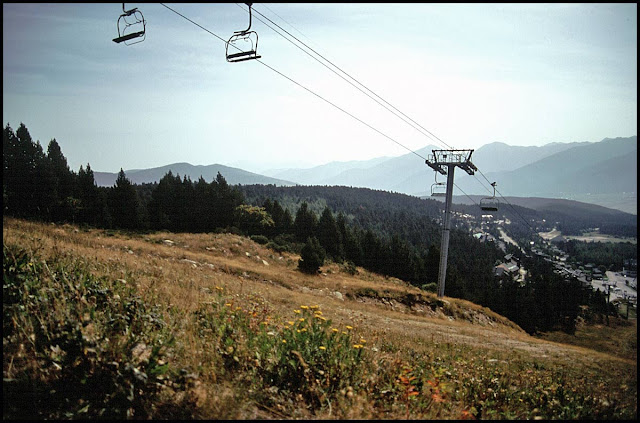 A ski piste on the descent to Fort-Romeu

Here we quickly managed to replenish our euros and acquire food (mainly lunches) to see us through the next few days. Shop1 supermarket was probably the best since Danchuria, but (luckily) we had to rush to get the job done by the time it shut for lunch at 12.30. Or we might have been even heavier!
On the way out of Font-Romeu I tripped on a curb. So a hand and thumb were bleeding and shoulder skinned despite t-shirt protection. Trouser legs saved another leg injury though the trousers were further damaged. So I was a sorry sight as I tucked into a lavish lunch (1.00 to 1.45) of crisps, baguette, sheep's cheese, pâté de trois poivres, tomatoes and a bottle of coke. That certainly made us both feel better.
Unfortunately Véron's route had been built on - a new housing estate blocked our way, so we took a haphazard route down through fields, and over a narrow gauge railway line. 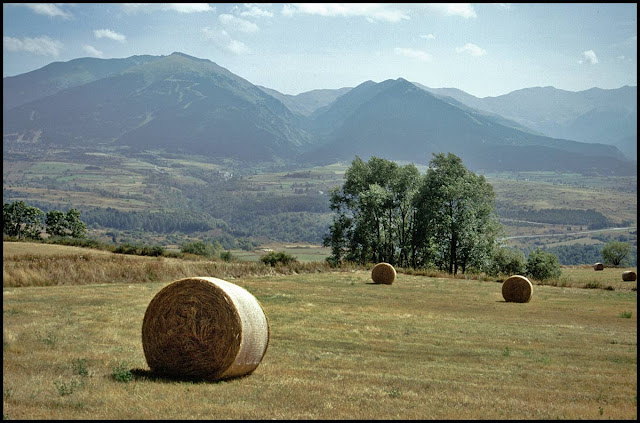 Soon after this a hopeful looking track ended and we had to make our way steeply down to the D29 road through a thorny jungle of bushes. And so we reached Pont de Bou and crossed the busy main road to , to a picnic bench surrounded by litter.
Véron's directions looked uncomfortably strenuous or impossible, so we chose to walk the remaining 3 to 4 kilometres to Eyne along a quiet road (the D29 again) after a short stretch along the main road. 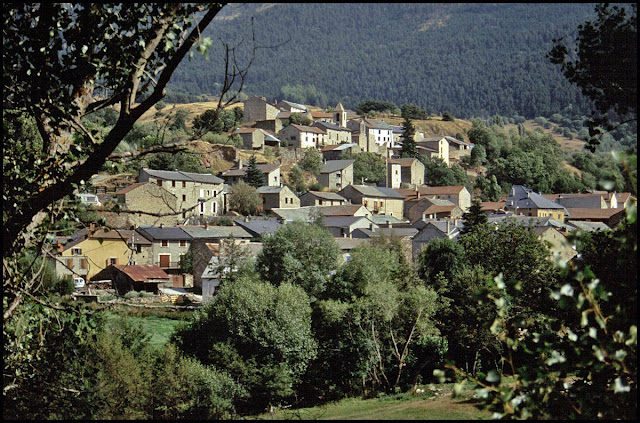 3.45 pm - Eyne - horses, dogs, a good water point to take on four litres before continuing for ~ 3 miles / 1½ hours / 400 metres ascent, up the pretty Eyne valley, through a nature reserve, mainly in trees.
Quite a few people coming down, (lots of day walkers seen today). Treasure found - a Snickers bar. At 5.20 we find a nice spot at 2015 metres. When will we climb so heavy and camp so high again? Beautiful on the way up, with the low sun glinting on red berries and rushing water below menacing grey clouds dashing across the sky. Tent soon up. 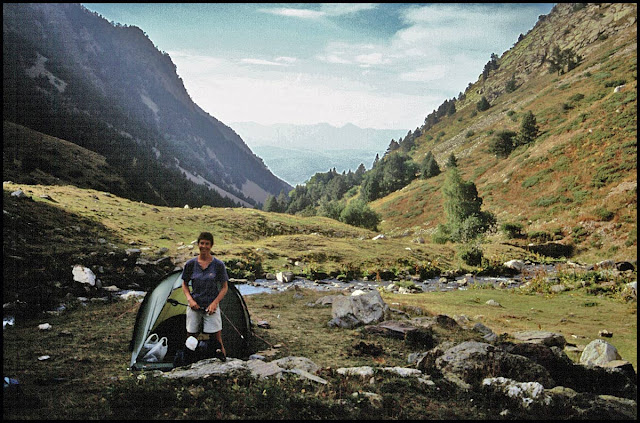 Dippers in the river - haven't seen them for a while. A marmot suddenly spots us - he is just a few yards from the tent.
We are soon relaxing in the tent in journey honoured custom, with chores being completed and this entry being made between courses. Spaghetti carbonara and added ham is consumed by 8.15 as the light starts to fade - around an hour earlier than when we started the journey. Asleep soon after 9 pm, by when it is completely dark. Lights of Font-Romeu in view below. Clear sky but warm.
Stats and route (Viewranger):
23 km, 1200 metres ascent, 8.7 hours 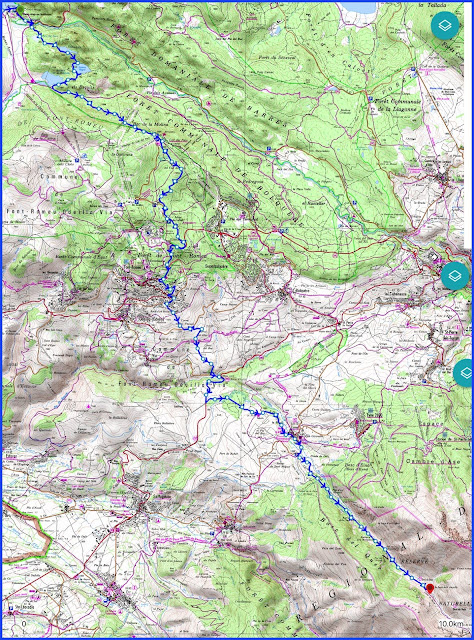 Next Posting
Previous Posting
Index
Posted by Phreerunner at 17:28