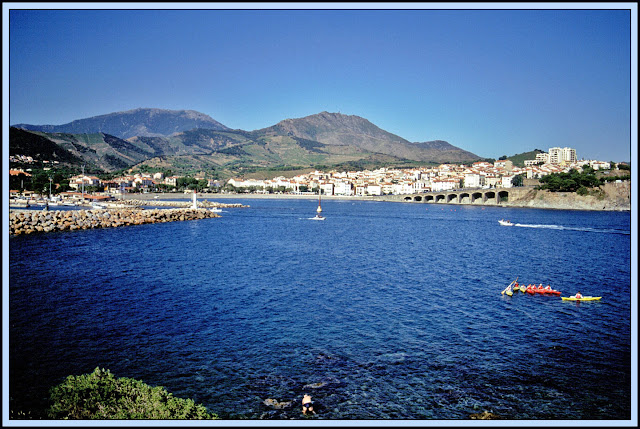 
A lie in at Banyuls after a somewhat disturbed night, for me anyway. People talking until about 6 am (eventually someone shouted at them), dogs barking, unidentifyable bleeps, train noises, motor bikes, cars, Sue's snores, then finally chirping birds. The latter not a problem, but the following night (Saturday) was similar except the talking stopped around 1 am.
Not to worry, we did sleep on the stony ground, tent supported by rocks at the back and by our extra guys at the front being tied to trees. (Need two more similar guys for the back.)
Wandered around sunny Banyuls in the morning. Found girolles for sale at €9.90/kilo. Tempting, Watched kayakers, divers and others.

Cappuccinos on the sea front in the sun. 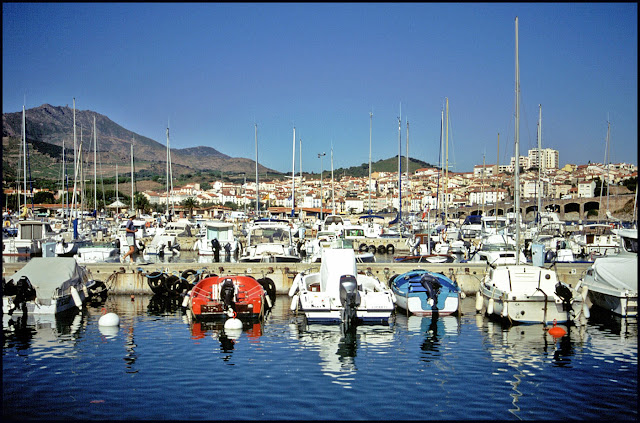 Then we bought lunch ingredients and on the way back to our dusty campsite we diverted to the railway station to investigate trains to . There was one in ten minutes, at 12.30, so we got it.
Found a nice small park in to eat lunch - credit cards used as we had no cutlery whatsoever with us. The main purpose of the visit was to try to hire a car for our remaining three days before the flight home. There were about six car hire places within 200 metres of station (a 25 minute train ride from Banyuls) - all shut for lunch from 12.00 to 14.00.
So at 14.30 we did a tour - all had no cars or were still shut, but "no cars" in Hertz had only been overheard and qualified "maybe later", so we went back there. Very luckily, they had a Renault Twingo. We accepted with glee and headed off in this (very soon getting stuck in a traffic jam caused by a massive cavalcade of motor bikes protesting about something), our first journey in a car for nearly eight weeks, to the picturesque resort of Collioure.
Parked in a lay-by  about 1 km south of the town and walked in. 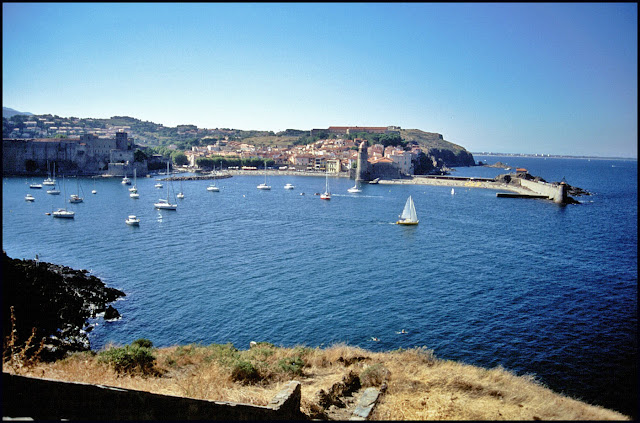 Very touristy and upmarket. Lots of shops, and a street with musicians, paved with real grass! 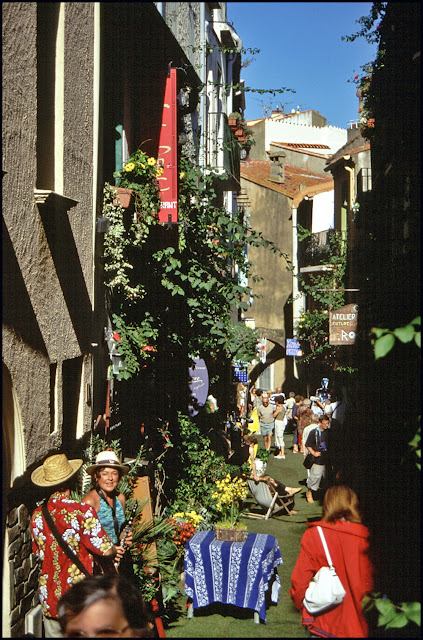 Sue went for a swim - she enjoyed it more than yesterday, but still cold. Nice ice creams. 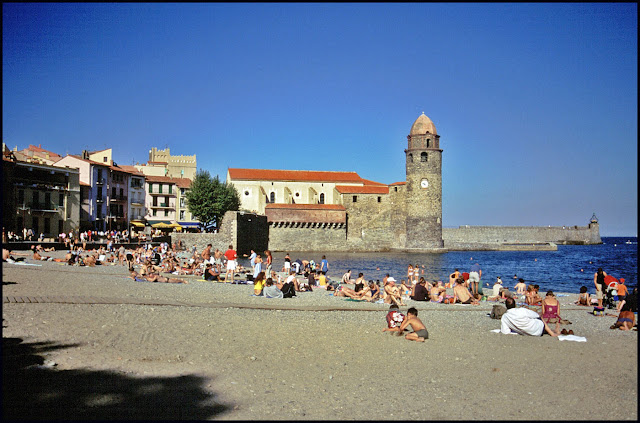 Back to Banyuls for a final walk along GR10. Smells of crushed grapes from the wineries. Truck and van loads of grapes being delivered today - it's very much the season for production of Corbières wine.
Excellent choice of restaurant - we went early and got the last table - La Vieille Cave Pizzeria - shared salad, chef's pizza - €28. Beer. Lots of water - we were dehydrated from the day! Back to camp around 9.30 for an adequate sleep on this less than satisfactory site.

Next Posting
Previous Posting
Index
Posted by Phreerunner at 11:16

Ahhh looks like some happy memories (apart from the disturbed night)

Yes indeed, Jenny, and I'll have time over the next few days to conclude this entire trip and produce an index. And a photobook? We already have a nice album, but no text.

There are some Vanoise postings if you'd like to reminisce on that trip... just click on the Vanoise label on the right.

Ironic that I started the Pyrenees 2004 trip blog diary last year, when we stayed at home due to Sue's dad's illness, so that'll be two summers without a long trip.

I'm back at work next week (from home) but will find time to escape and follow this trip along. Just read the latest instalment. Will check out the Vanoise too. Thanks!