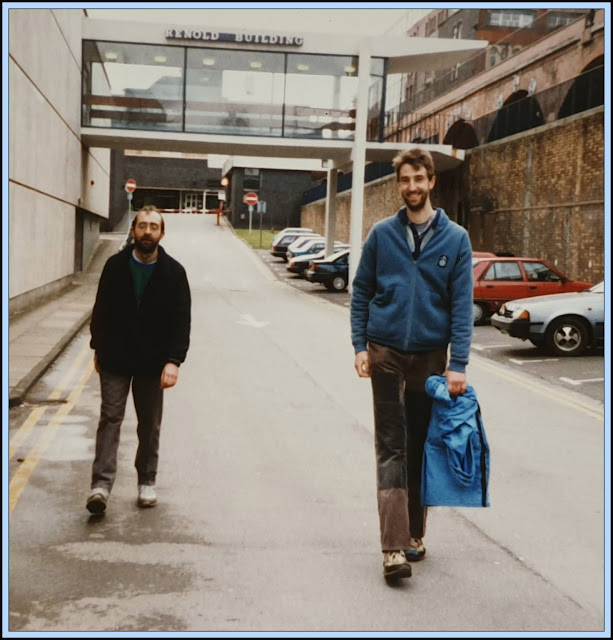 Having recently published Nick's diatribe on the 1981 Bogle Stroll (here), I've now encountered photographic evidence of the same event held in 1994. The personnel are different, but the gist of it is similar.
By 1994, the tradition of convening in the Red Lion in Withington on the Sunday after the 55 mile walk was still apparent, with 20 to 30 from UMIST Hiking Club turning up for that.
I came across just six photos, which is five more than I have for 1981, starting with Glyn and Robert outside the Renold Building at UMIST, just before the finish.
Robert was accustomed to finishing a bit faster, so he found the slow approach to the finish quite enjoyable at the gentle pace set by Glyn, who at this point was 'absolutely knackered'.
Judging by the next two pictures, taken within 10 metres of the finishing desk, Glyn was just about at the end of his tether. 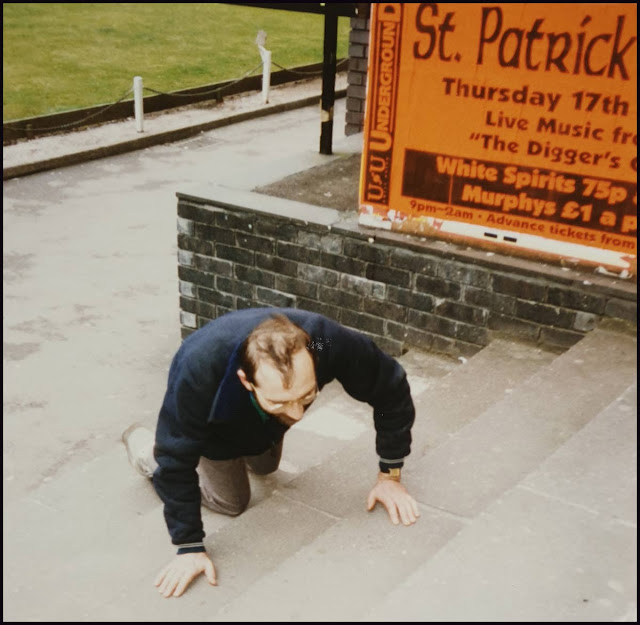 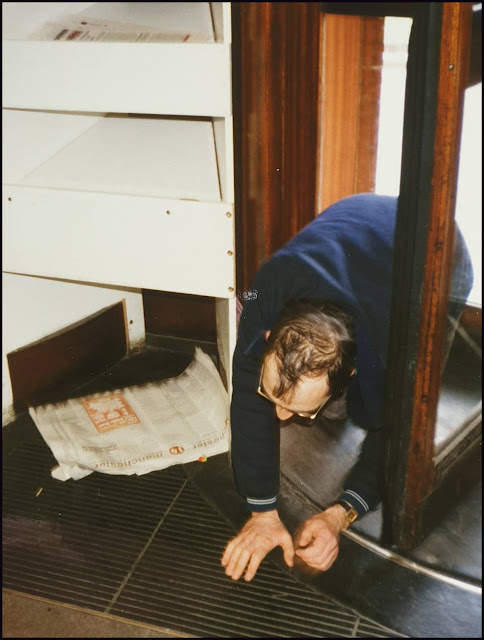 I took Robert and Glyn back to Blackrod, where Glyn is pictured in 'recovery' position. 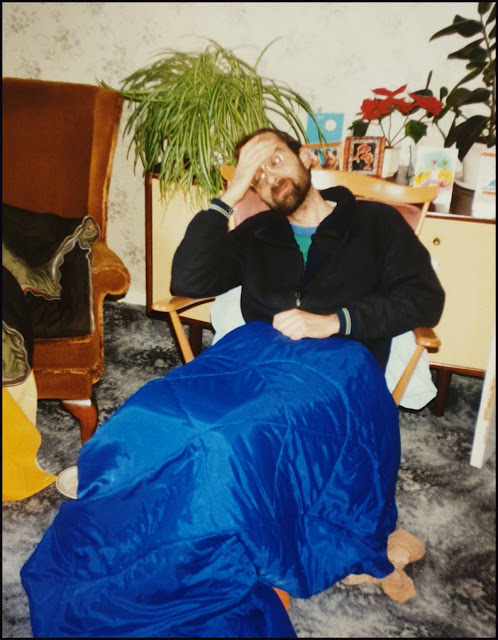 Robert could have walked it all again... ?! 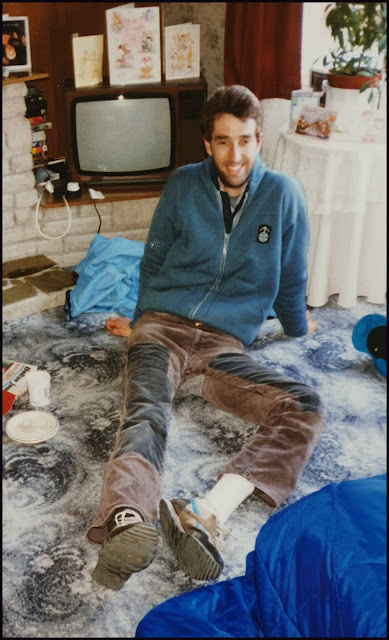 To be fair to Glyn, he did write his diary entry in Volume 23 that afternoon, closely followed by Robert's entry:

This really is the last time without any training. 15 hours 13 minutes! including about 6 hours of hell. Brain did not want to speak to legs after Blackrod. Severe gut-rot - diarrhoea - most of the way round. Left ankle seized up afterwards (how did it get bruised?) It was a beautiful evening though - ideal Bogling weather, and until half way round I really enjoyed it. Heartfelt thanks to Robert for walking me in through , no, let's be honest... from Blackrod.

Repaired old Reebok trainers with uhu and a piece of Lyn's blue dress on Friday evening before the start. This was an excellent idea but blister on left heel before Monton (near the start - Ed) made me wish I had bought a new pair. The weather was excellent, with slight drizzle at Coppull, and later on a shower around Westhoughton.
A pile of fifty or so Ann Summers lingerie catalogues prove interesting reading (just a little way past the Hiking Club checkpoint). Glyn insisted I had a good look.
Disappointing lack of numbers - only 300 to 400 walkers and no 'Mad Ones' team! Took an unplanned detour (again) down to Leigh bus station so added another half mile to the route. Also followed the 'old route' out of , ignoring the Bogle signs. Glyn made several unplanned detours including sitting on his throne in the back of his campervan at Blackrod.
Made good progress to Blackrod (~40 miles - Ed) (9hrs 13mins) but Glyn's general illness and lack of training caught up with him and our pace slowed considerably.
This gave me a good excuse to slow down. Lyn and Gill just did the Blackrod checkpoint and the support included a weekend FT to read whilst Glyn was on his throne.
Martin's appearance just after the Westhoughton checkpoint provided a welcome sight. He walked with us for a couple of miles, then moved his car to Walkden, and later to Swinton. The conversation and drinks provided a welcome distraction from my general aches and pains.
(Glyn spotted lots of frogs/toads on the way round.)
The walk down seemed to me to be a pleasant stroll for once, but Glyn would not agree with this description.
Arrived back at UMIST at 1.26 pm, Glyn completing the walk by crawling up the Union steps on all fours. We were 9th and 10th to finish. What are the students coming to?
Martin's support extended to a lift back to Blackrod, where Gill provided copious quantities of tea and crumpets.
Robert 5/3/94
Additional Points

's Ambulance men seemed to nearly outnumber the walkers.
Bogle organisation poor.
Chorley Bogle checkpoint moved to the other side of , out of sight up a cul de sac. G & R gave it a miss.
R


Tradition dictated a Sunday visit to the Red Lion, where volume 23 of the diary can be seen in front of David Jones, who together with Tim Budd graced the volume with their entries. Gill and Glyn are also pictured below (Glyn looking a bit more human today) and Conan Harrod was there. He went on to break his leg near the summit of Everest, returning a few years later to climb to the summit in a rather uneventful manner. 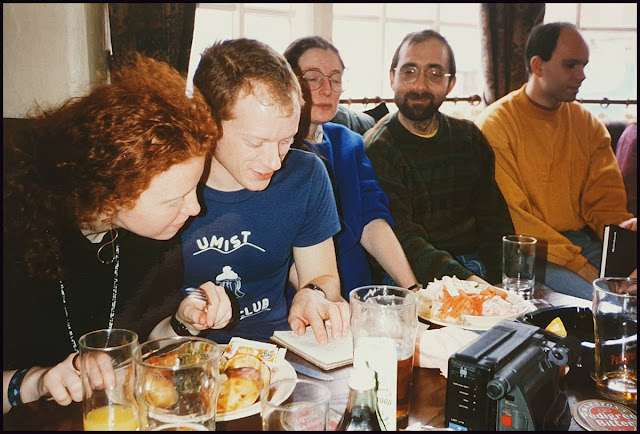 Here are the rest of the entries from the diary:
Tim's report

Weather better than usual, turnout low so quite a lonely stroll. Played leapfrog with Glyn and Rob from to Westhoughton, where they stopped for breakfast. I couldn't force any down.
Painful as usual from Walkden onwards - my mind wants to continue, my legs want me to eat worms and die. Still, I have forgotten all that by next year!
Tim B 6/3/94
David's report
Bought a new pair of trainers the Thursday before, and took a couple of hours' kip on Friday afternoon, and that constituted most of my Bogle preparation this year. I blame this partly on the arrival of baby Chloë in December, and mostly on disorganisation.
Started at 11 pm anticipating rain on Saturday morning (or I'd have started at midnight) and headed off into a (too) warm night in the company of two orienteers who were talking about intending to finish it in about 8 hours. I left them after and after that I was (to my amazement) just on my own. Missed out lots of support points but was ably supported by John Fuller on his "winter bike" (a little Japanese thing).
Got to the last checkpoint at 7.45 and trudged into UMIST at 8.47, to give a 9.47 time with the customary sprint for the steps.
Toodle-pip!
David
Martin's report (in support)
Up at 7.00 after 5.30 alarm, for 7.50 departure and off to walk in Rob and Glyn.
Missed them at Blackrod - later discovered Glyn had been hiding on a potty in a van, behind which Rob was hiding. By , I realised I'd missed them and I eventually tracked them down to near the motel.
Three trips with the car - jogging to the walkers, and walking back to the car with them, took us to the junction. I'd also encountered Tim Budd, on his ninth Bogle, a few minutes ahead of Glyn and Rob.
Walked in with them from the East Lancs Junction (approx 8 miles). Glyn absolutely Knackered, Rob ok. They took 15.13 and finished 9th and 10th - a sad reflection on the state of Bogle. MASS Rag apparently disintegrated this year for financial support reasons, and only UMIST was interested in continuing with Bogle - only 400 or so took part.
Dave Jones won convincingly in 9.47, Andy Martin took 13.09, and Tim Budd 14.37. Five out of 10, even though Mad Ones didn't have a designated team (for the first time since 1968). Talk of a 'Geriatric' Mad Ones team next year. Just 15 or 16 members of the Tech Domski Hiking and Hostelling Club (TDHHC) finished Bogle this year.
A taxi to Irlam to recover the car, then a drive to Blackrod for tea and crumpets - and to drop off Glyn and Robert off at Lyn's house.
Not a very demanding Bogle for me - try again next year...
Adjourn to Red Lion on Sunday lunchtime, with about a dozen current students and a similar number of 'geriatrics'. It's strange how you can get to vaguely know people encountered for just an hour or two - once a year.
Stories of horror from John Fuller - retired from walking due to bad knees but a major support effort on his motorbike then a motorway drive (nearly asleep) back to Huddersfield.
Posted by Phreerunner at 16:38

What a reminder of what my house and furniture used to be like. I still have the two chairs pictured although both have been recovered. I cannot remember the blue dress Robert used to make the repair though.

The year I got early retirement from Yorkshire Bank on the grounds of my wife's MND diagnosis. I have now drawn the pension for longer than I worked for them.

Congratulations Conrad. Long may that continue!

I enjoyed reading the post. I do look like I could have gone round again. Those were the days when I could turn up and just stroll round. I can remember John Fuller’s motorbike. The noise of the engine was a welcome sound that support was on its way. You have inspired me to search thought my old photos. I have found a few, some old certificates, a comprehensive report from 1996 and a report from my last Bogle in 1997 I started writing and never finished.

I'll enjoy receiving and reading all that, Robert.