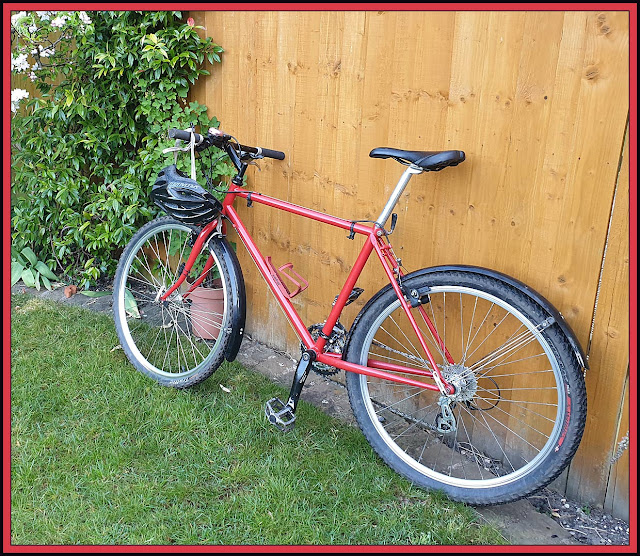 Thirty years ago today I left work early on a Saturday morning and spent a good hour with a chap called Graham in Harry Hall's shop near the Cathedral. I'd done some research and was aiming for a Trek 830 bike. I finished up with the Trail Breaker. It has had relatively light use, clocking up just around 12,000 miles in the 30 years of its existence. It has received more use in recent years - over 1,000 miles last year, and currently enjoys over 20 miles a week under Lockdown. My routine involves three rides a week, on the suburban route shown below in blue, alternating between this bike and the more modern Specialised Stumpjumper.

The Trail Breaker was a quality mountain bike in its day, but was soon to become outdated by way of the introduction of suspension and disc brakes. However, it was a perfect fit for me, and I didn't use it enough to justify upgrading, until Dave O offered me his five year old Stumpjumper for a good price in 2011.
Whilst the Trail Breaker was seen as an obsolete sort of bike, destined for the scrap heap, I found it lighter and more appropriate for much of our local off road routes - certainly those involving canal towpaths or the Trans Pennine Trail, so it got (and still gets) more use than the more sophisticated Stumpjumper, which is of course much better over some of the rough ground of the Peak District, etc.
However, more recently I've seen a resurgence of bikes very similar to my 30 year old one. They are called 'Gravel Bikes'. So my old mountain bike is no longer obsolete, it's more a sort of 'classic' gravel bike. I hope that both it and 'Stumpy' can give me a few more years of pleasure, before I resort to a battery powered model!
Posted by Phreerunner at 13:18

Judging by the number photos it has adorned over the years I guess you have a fond attachment to it.

Yes Conrad, it has served me well.