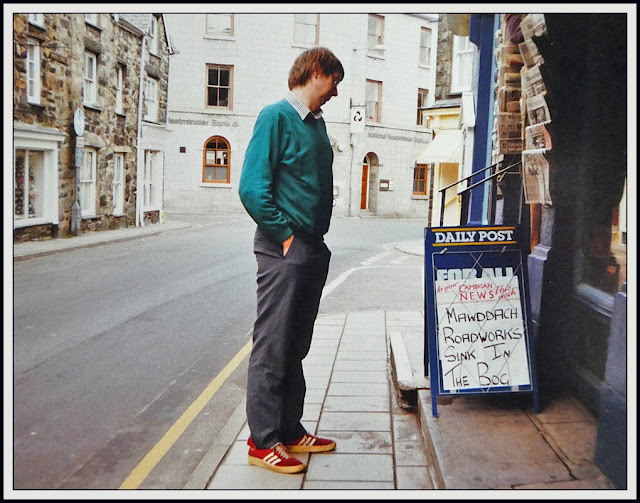 After spending some time today sorting through photos from 1970, this posting feels relatively recent! At least the pictures have a bit of colour. That was absent in 1970. Dave is pictured above looking rather concerned by the news headline. We adjourned for more coffee. Here's what we wrote at the time...
Saturday (Martin)
Up at 7 am and leisurely gather stuff and breakfast etc. Alone as the rest of the family is at Center Parcs in . Leave at 7:45 in the Fiesta with Dave.

Arrive Dolgellau 9:45. Doss about for an hour buying a duff Karrimat, buckle for chest strap (Martin) and water bottle (Dave), who also forgot to buy soup.

Long sojourn for two mugs of coffee in a milk bar.
Eventually leave just before 11 am. Cross the river and head up a hill to a golf course. 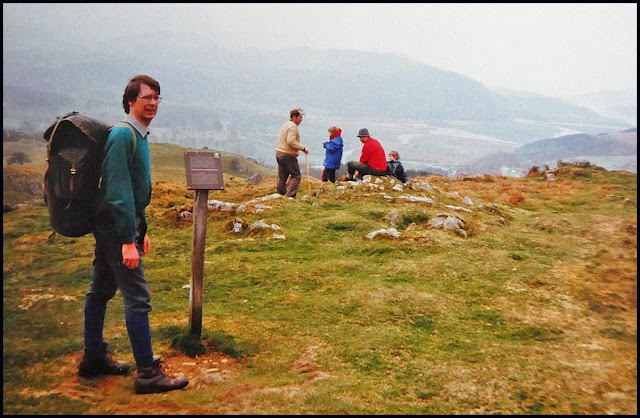 Through lanes to a track leading to 'The Precipice Walk. Lots of people on this walk, which we did in reverse. Numerous information posts - a sort of nature trail. 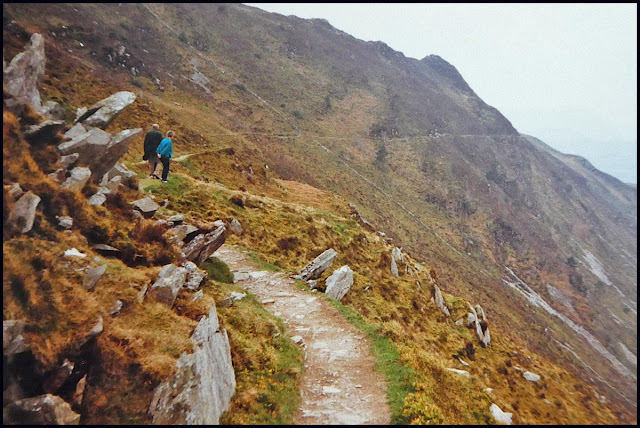 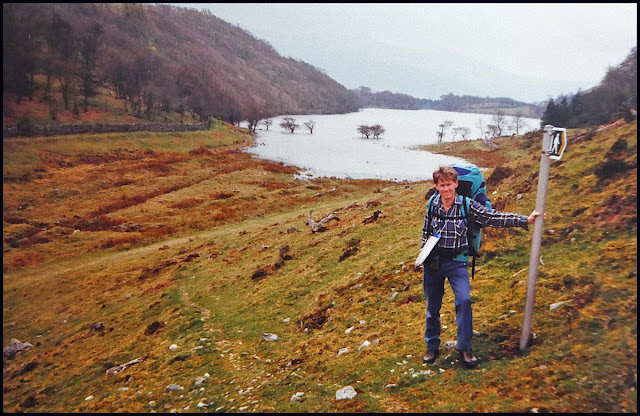 Martin's new Jaguar S65 KS100e SA1 (Karrimor) rucksack, resplendently mint and blue with a now operative chest strap, contrasted with Dave's old sack that just about clings together these days. [I still use that Jaguar rucksack. I suppose it's not surprising that the pockets are falling off! It is more durable than a series of three successors.]

We brew up in trees near the Precipice Walk car park before strolling to Llanfachreth more warmly wrapped. A sunny but chilly day. 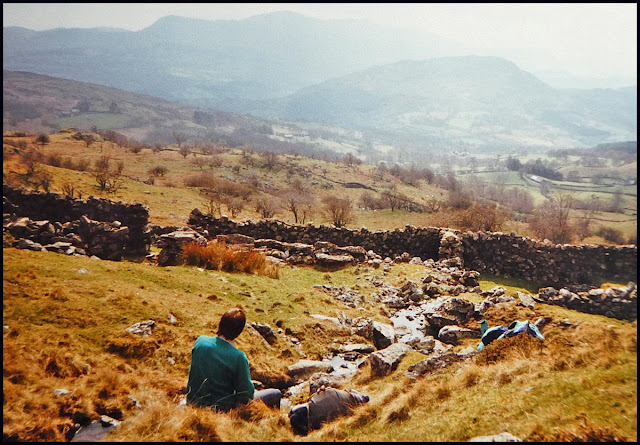 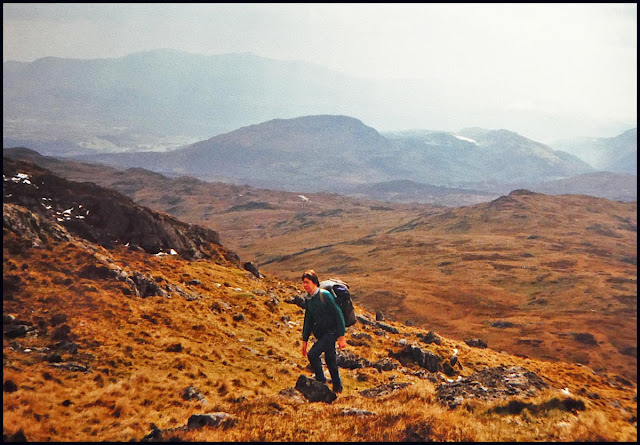 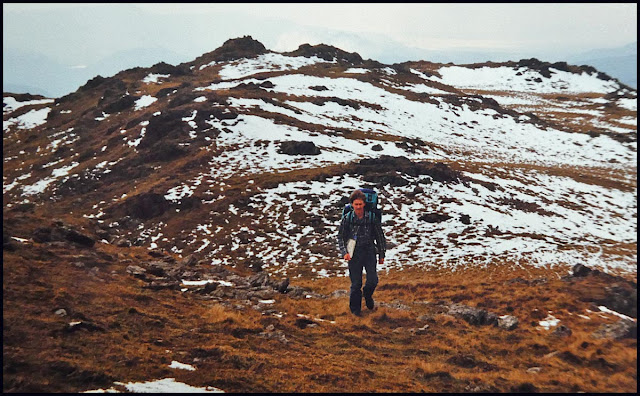 Now start the planned route (about 1:30 pm) and head around lanes as far as Cors-y-garnedd. Then a long pathless walk up Rhobell Fawr (2059'). Bright sunshine soon results in disrobing. Some tricky walls are negotiated without incident. Reach a broad boggy section, then go along another, hard to climb, wall before heading up the crest to the soggy snow on the summit. A ring ouzel was seen here. Windy. Took quick self-timed photos and admired views before descending east. 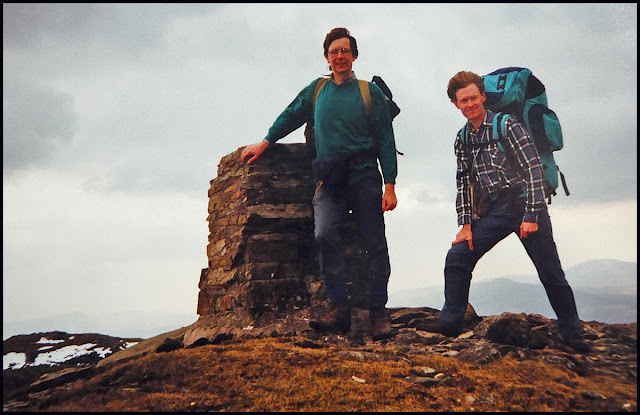 Superb views to Cadair Idris though today it is disappointingly hazy. is only just visible - there's quite a bit of snow on it from last week's cold snap.

Steep descent to a forestry track. Head north through the forest on a superb track until it ends. Then stumble through leafless larch, deep and narrow in the forest, before reaching a clearing where a path is marked.

Slosh endlessly on catching sight of a gap to the edge of the forest. Explore this and find a secluded spot, flat and sheltered, in the oxbow of a stream at about SH795276.
Tents were slowly but efficiently erected, for the first time this year. We had a disappointing view, restricted to Foel Gron in the background and a grassy bank in the foreground. However, once ensconced, our tents were sealed to keep out the wind. 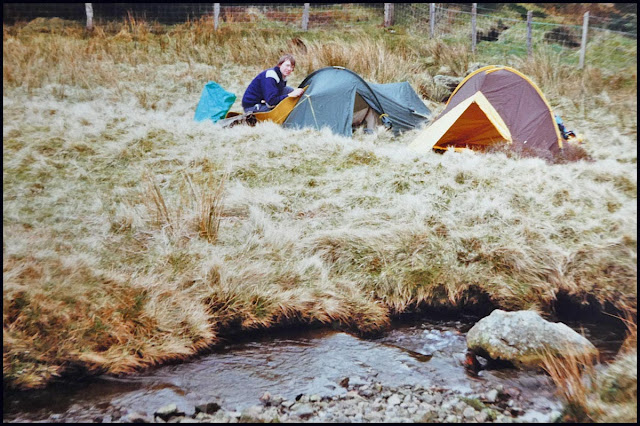 It was cosy, with the gentle gurgling of the stream, which has good water. Hard to get more secluded. No one seen since Llanfachreth.

Brews are followed by snooze (Dave - deep snore) and a read of Riotous Assembly.

We enjoyed an assortment of food, but Dave forgot soup.
Sunday (Dave)

Dave believes some people came by in the evening. VERY COLD NIGHT. Dave woke up cold at 1:00 am. Ok once hood used and buried inside bag.

Heavy frost in evidence in the morning. Martin's water bottle and boots are frozen. 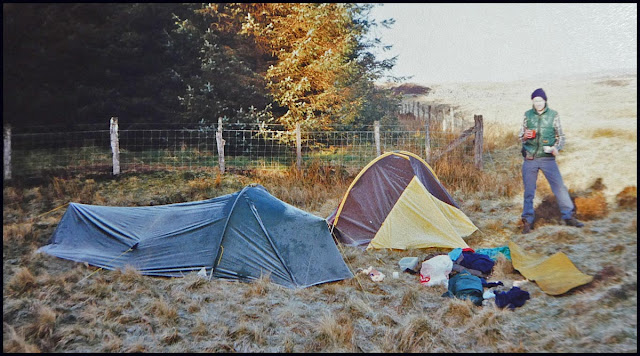 Set off downstream at 8:15, past the footpath we should have come down. Had an amusing time going through a sheep hole in a wall - lots of photos. 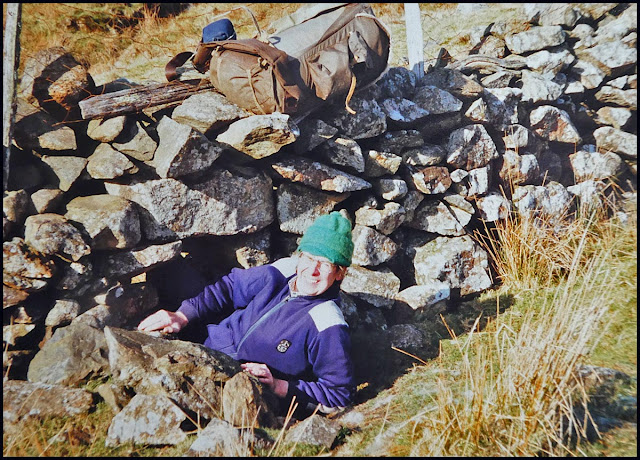 Down into a valley where a field contained two enormous piles of boulders - the rest of the field had no stones at all - never seen this before. 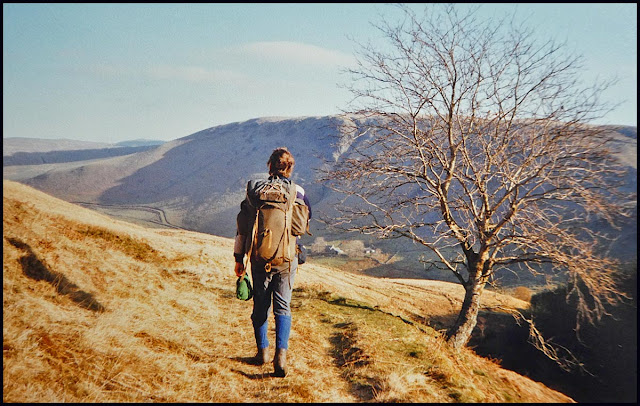 Down track / road and through Cym-hasgen farm, then up the hill to the forest. At first the forest looked like it was going to be a long slog fighting the forest, but after a few yards a very wide track appeared. Much evidence of forestry work. At one point we found our way barred by fallen trees and a 'Footpath Closed' sign which we ignored. 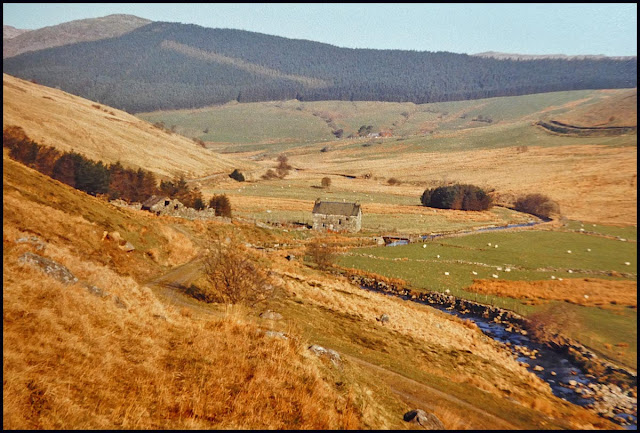 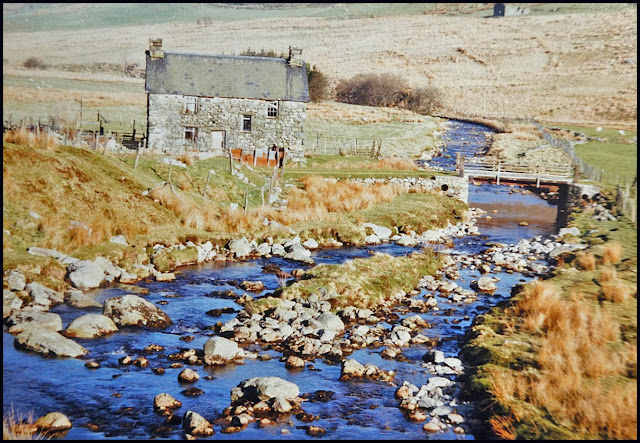 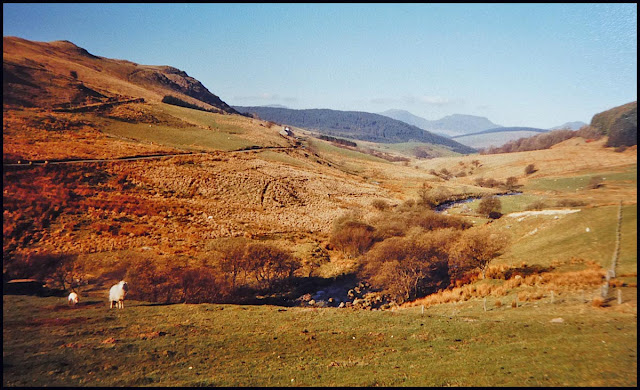 After a long mile and a half we left the forest and headed to the road at Ffridd y Tyllau. There we turned right, and soon took a left turn to pass Hendre-blaen-Lliw farm, where we found an excellent spot to stop - well sheltered, lots of water, very sunny most of the time. 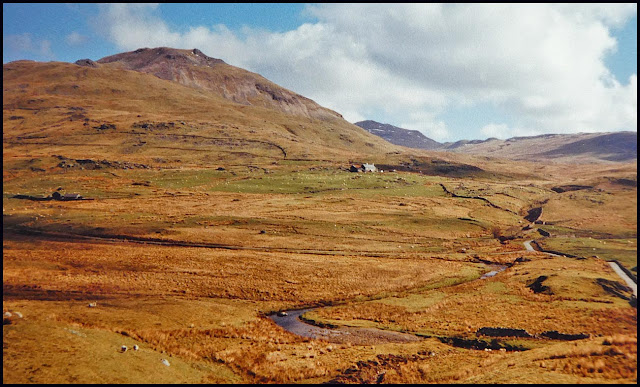 Dave had two brews, Martin had a bacon butty. Today is sunnier, colder and less hazy than yesterday. Arrive at brew site 10:30, leave 11:10. 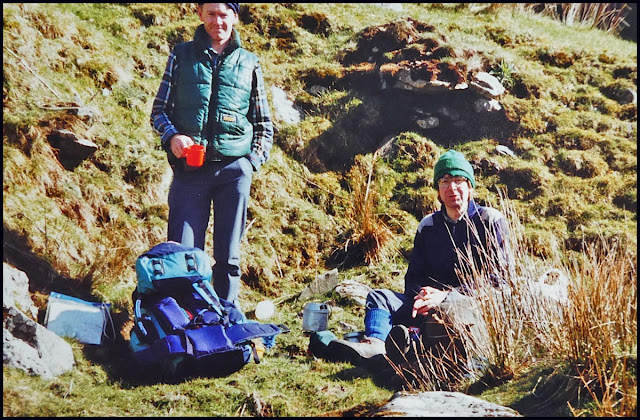 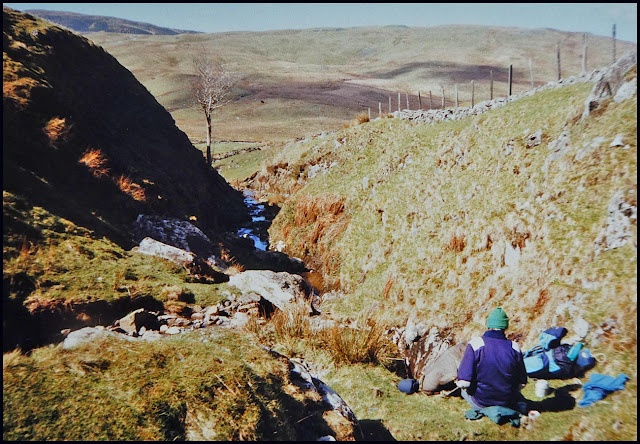 Set off for summit of Moel Llyfnant (2461'), which is straightforward. On top for 12:00. Martin finds a tunnel near the top but his torch battery is no good - too much reading last night. 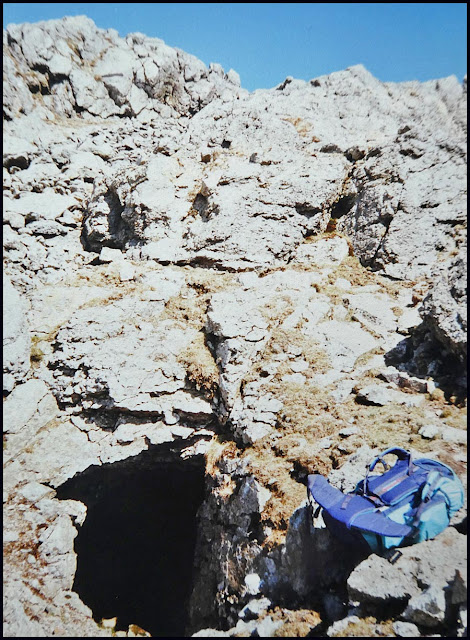 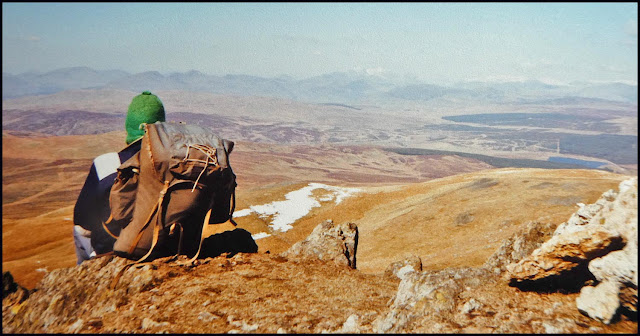 Set off down the east side. Stop for brew 12:15. Dave just had water. Down and up on to Arenig Fawr - summit reached 2:00. Again a simple slog with a stop on the subsidiary summit (2771') which was unusually windless. Then on to the 2801ft summit. Self-timed photos taken twice as Dave failed to make it for the first one as he found a long route to the trig point from the camera, blocked by a hidden wall. [Really, Dave?] 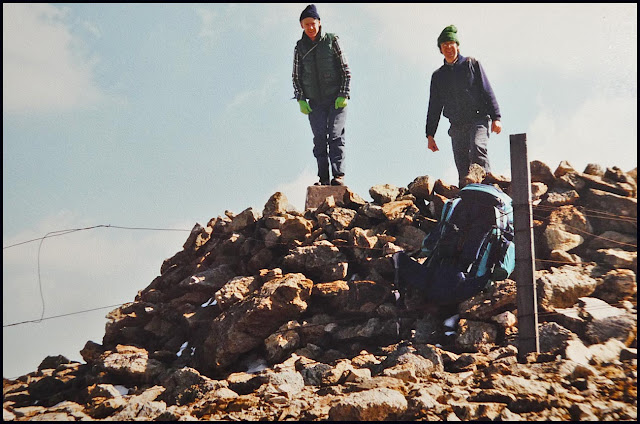 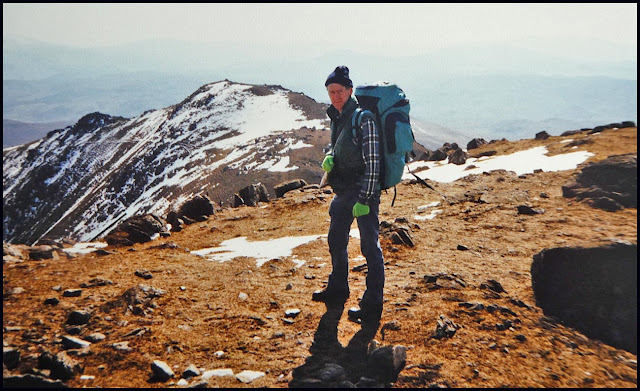 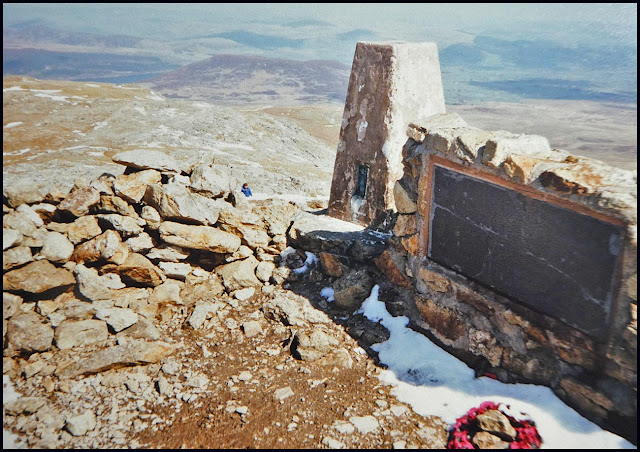 After a last look at the view, we set off down the - good views back all the way. 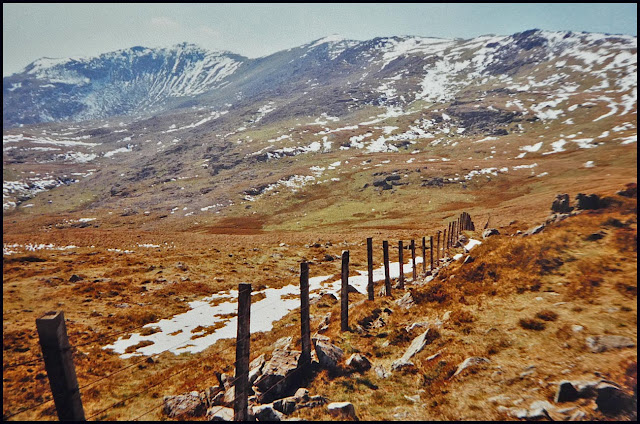 Quite a few walkers seen on this hill - the first since we were on the Precipice Walk. Walk around Llyn Arenig Fawr Reservoir, over the dam, and take a northerly path back to the road. 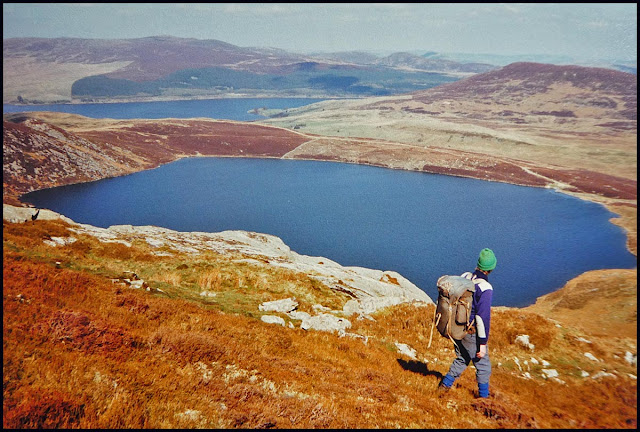 Turn left then right along the first footpath to the main A4212 road, where Martin sets off at 3:40 to hitch to Dolgellau, while Dave sits, brews up, and writes this entry. Time is now 5:10. 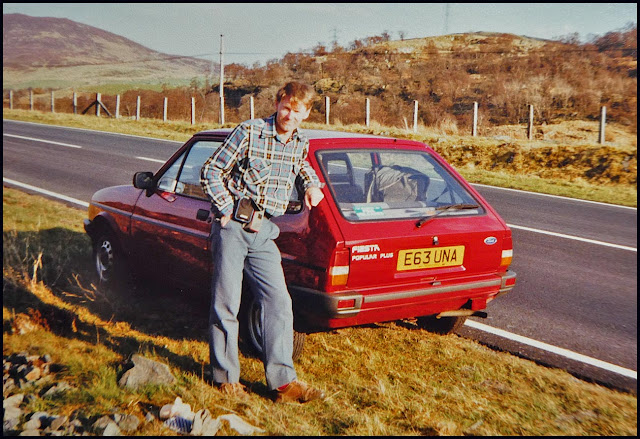 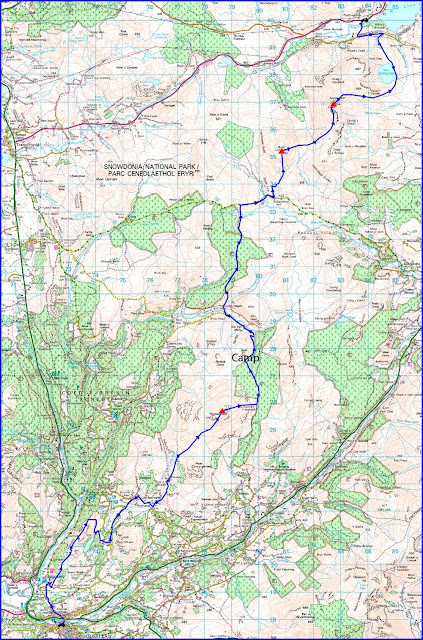 The pleasant curry relaxed us after a tiring weekend. Windburn and sunburn so far. This was added to at , where Dave and Martin were confronted by a woman with a baby, and a chip pan fire in their house. Dave entered and withdrew after a few lungfulls of smoke. The fire was then heroically extinguished by Martin using doormats. Dave's reappearance with a torch then enabled the cooker to be switched off. Fire engines arrived and treated it very seriously. After shooing us out of the way at first, they returned with threats of hospitalisation. Martin returned quickly home. Dave spluttered off to dry his tent and was later found by a wandering ambulance man and managed narrowly to avoid hospitalisation. Any future diary reference to 'The Heroes' is explained by the foregoing. [I recall this with clarity. It was very hard to find the cooker in that house as the smoke made it completely dark despite the lights being on. The doormat was applied just in time.]

Nick comments by email:
'Another interesting read - not sure I ever knew the origin of the ‘heroes’ moniker.
Nice to see Dave modeling a very smart pair of adidas trainers - definitely a fashion statement!
Stay safe,
Nick'
(Nick now works for Adidas)

And Dave comments thus:
Lots of comments about clothes in this article – Didn’t usually bother us.
The trainers were bright though – ugh – bet they didn’t stay clean for long.
The old rucksack is still going strong but it never was comfortable. Now not for walking but was useful for carrying all my small recorders around courses. Now replaced by proper bag designed for that purpose.
Still using for mass carrying when going away. When I first started playing recorders again I could go on a week course with a rucksack and maybe a carrier bag. Now when the two of us go away the back seats of the Focus are put down and the entire boot is filled. Indeed we used to be able to carry one small additional passenger – with the recent purchase of my new 12 ft long recorder that comes in two large boxes that's no longer possible!
The old fleece (Nick didn’t they used to be referred to as Fibre Pile?) couldn’t have lasted much longer.

I remember the fire and the annoying ambulance man and Martin's superb response in putting out the fire. Of course a year later the house I was in (next door) went up in smoke – sadly fatal.

As for a trip with Nick in. There was a Scotland trip with both Nick and his brother (Johnny?) or have you already covered that one?

All the best
Dave

Thanks Dave, and Nick. This leaves me trying to picture Dave with a 12' recorder - like some Austrian piper dressed in period costume on a remote alp somewhere - we have sometimes witnessed such strange events!

We did indeed have a Torridon trip with both Nick and Johnny. Another one that stands out and that I'll get to soon, I hope. It features one of the very few occasions we had a rope with us (I wasn't aware of that until Johnny pulled it out in a hurry to carry out a rescue on Beinn Eighe). For the moment I've chosen a more recent walk with Nick to recount.

You haven't changed much Martin. That would be a nice walk to re-trace. With a smaller sack obviously.

Thanks Alan, and yes, it's the second Welsh backpack that I've dragged from the archives that would be good to repeat. Probably with the same sack - needed to accommodate the Karrimat (not the inferior one bought in Dolgellau) that I've reverted to carrying.