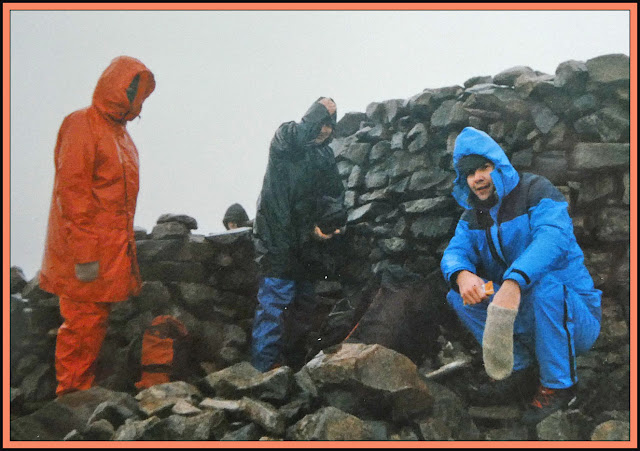 There's only one picture with this posting, the reason for which may soon become evident, but if Dave or Nick have any, I'm happy to add them.

1988 has until now been absent from these pages, but I'm remedying that with a few memories from all that time ago, starting with what was a traditional start to the year for me for a period of many years. A good walk.


After a late night with the Binns / Hills / Price / Perry squad plus Alan and Christine, and lots of Balderdash / Bastard activities, Martin crawled reluctantly from his pit at 7:45 and was out of the house by 8 am.


There was an unusually long delay at , where Dave had lost his door key.


This semi somnolent trio then sped (if travelling in Martin's Sierra can be so described) up to Seathwaite for the 10:30 rendezvous per his Christmas cards.


Only the Gray Nick was there. We arrived at 10:20 to be greeted by him, and then we adopted a time-consuming donning of boots and waterproofs whilst still in the car. (It was throwing it down outside.) Laurie made a futile attempt to waterproof his boots.


Eventually we braved the elements and set off into the stair rods. Boots soon leaked and Laurie's waterproof trousers proved inadequate. We plodded up to Sty Head, overtaking another two parties, and then traversed the cloud enshrouded .


The col with Lingmell proved to be a draughty place, but a walker sploshing his way down had told us it was now much calmer on top.


There were a number of soggy groups near the summit, where gloves were for the first time needed. The stair rods had become horizontal, but it was just possible to balance on top of the trig point.


Some photos were taken (see above), and lunch was quickly (very quickly by Dave) noshed and coffee (except Dave) sloshed down.


Martin made his usual navigational error on leaving the summit, but on production of a compass this was soon corrected, and the little group sloshed off in the direction of Great End. The wind was now behind us, which judging by the expressions of those travelling in the other direction, was A Good Thing.


The slippery rocks were negotiated without injury, and Esk Hause was soon approached. Here the cloud cleared a little and the way down to the Sprinkling Tarn path was clear.


An interesting river crossing brought us beside Ruddy Gill, for the final descent back to Seathwaite. This path had recently been repaired to counter erosion damage, and the descent was quite hard work on the slippery stones.


As the gloom decreased, the stair rods became vertical again (the rain was relentless all day) and the white water on the hillsides assumed a dominance over other features of the landscape. The view to Seathwaite and on to Borrowdale was 'atmospheric'.


Nick commented usefully that Seathwaite has the highest annual rainfall recorded in . There was no tea for sale at the farm (3:30), so we quickly removed wet things (Martin and Nick), or those wet things that could be removed (Dave and Laurie), and failed to negotiate the dog dirt (Martin).


The convoy to a Little Chef near Windermere then commenced, but Nick - the nattily dressed hiker in his dad's Rover, soon disappeared. A futile wait / search ensued. This culminated in Martin flashing to distraction a motor which turned out to be a Volvo.


Chef's grills and sundry pancakes later, and a drive in the rain back to Manchester by 7:30 brought a close to the day's activities, except for a phone call from Nick, who had disappeared due to failure to stow his boots and waterproofs before departure from Seathwaite. (Meanwhile, in the Little Chef, there had been reminiscences of Bob Laker's similar exploits with a brief case that he 'stowed' on the roof of his car!)

For the sake of completeness, here's the route we took - 14 km with 1000 metres ascent: 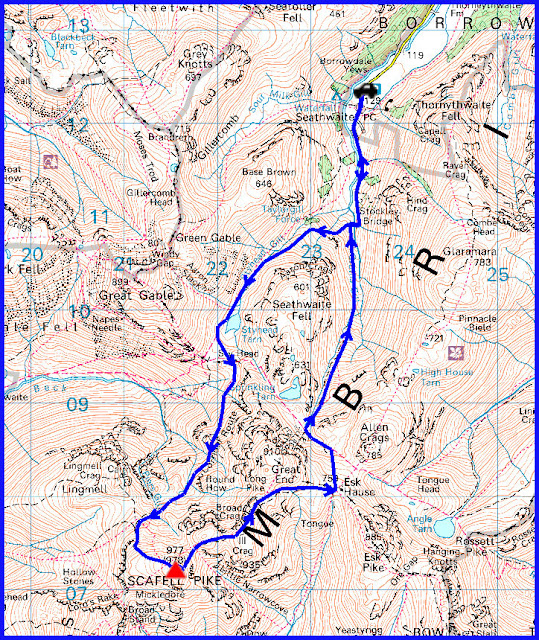 Thanks for sharing Martin. 1988 was a memorable year for me for many reasons, but I had forgotten it started like this. Don't have much memory of the walk apart from the walk back down the valley seemingly in the stream(s), but I do remember driving my Dad's Rover (it had electric windows!) and having to go back and find my boots etc. still sitting on the wall where I'd left them in the pouring rain. Interesting to see the photo - I still have the hat and the faithful Dachstein mitts but the waterproofs and plastic boots are long gone.

Thanks Nick, you also feature on the Duirinish trip that I'm currently writing up...