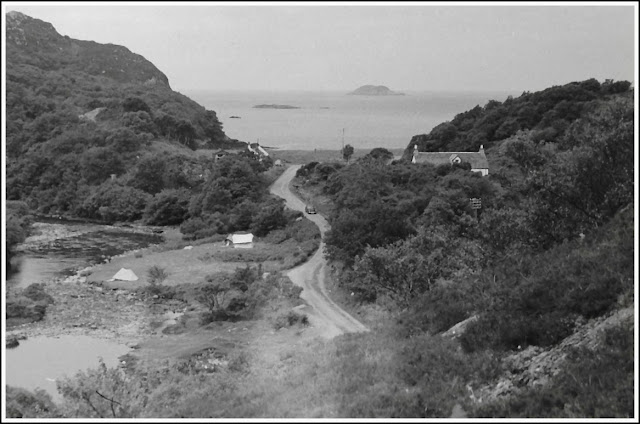 I apologise on at least three counts:
1. The dilatory nature of this report, 2. the lack of colour (I may have some colour slides somewhere, but probably not), and 3. the poor quality of the scanned pictures (albeit much improved thanks to Photoshop, as the silk paper on which they were printed leaves lots of small white dots and other imperfections when scanned).
I'm pleased to report that all my companions on this trip are alive and well, and I thank Anne Butler for putting me in touch with Robin. The other members of the party were Neil, Jim and Cath. I hope you all enjoy this short report, and the Dropbox file for the entire trip, via a separate link. I'll probably do a further posting with just one or two images from each day.
Note that you can click on any of the pictures to view a slideshow.
We started from the camping spot (I'm not sure whether the term 'site' applies [see below, I think it does apply]) at Inverkirkaig*, soon rising above the tents and the coast, as viewed above. After a little over 3 km we reached the Falls of Kirkaig. 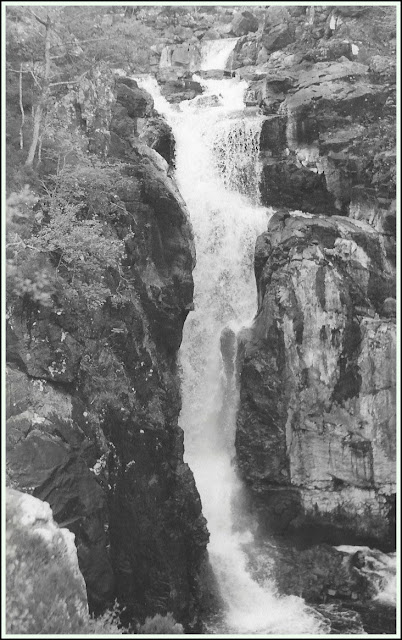 Soon after that we got our first view towards our objective. It looked very high. I hadn't been up it before. Nor, I think, had the others. 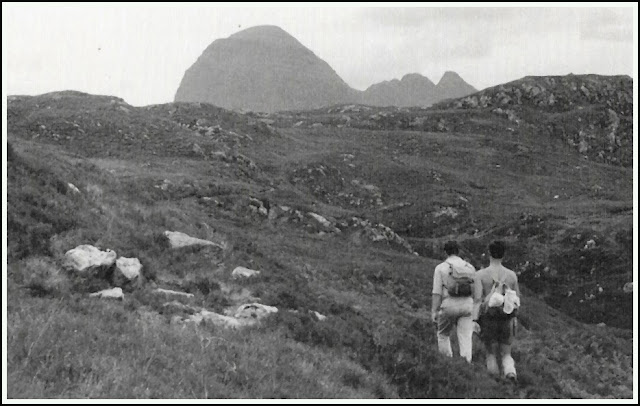 The path doubled back to get around Fionn Loch, which provided a pleasing foreground for the mountain. 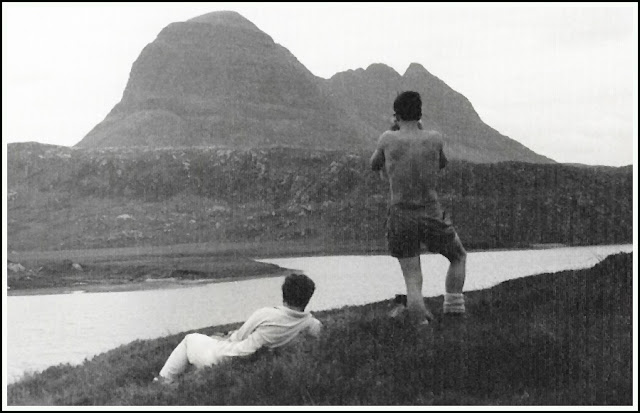 It's not a short walk in. 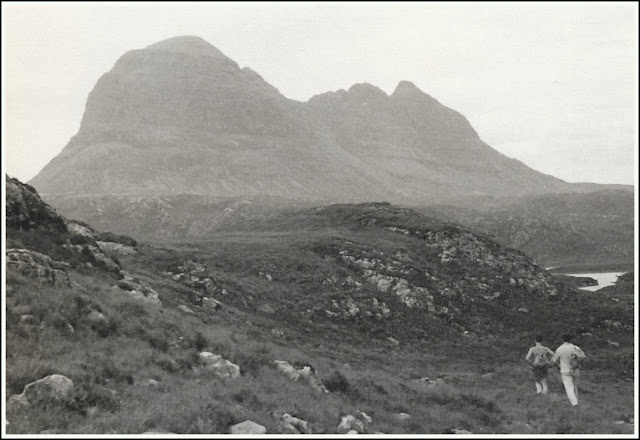 Time for a brew, before the steep ascent to Bealach Mor, which at about 560 metres lies between the mountain's two summits. 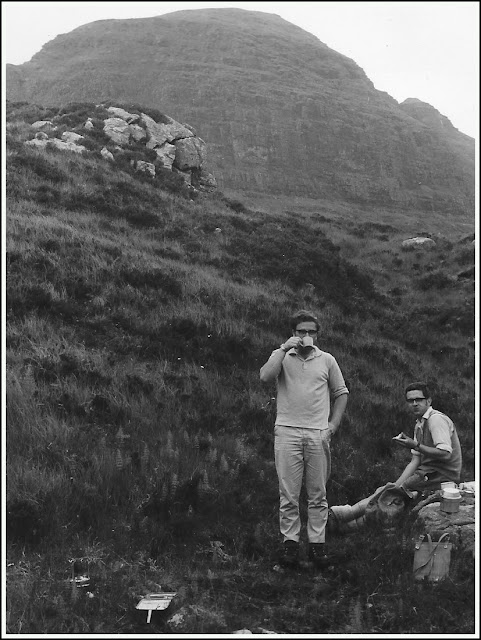 Having reached the col, we set about ascending the lower of the summits, Meall Meadhonach (723 metres), resting here before the final scramble to the top. [I'll leave it to Neil to describe his feelings!] 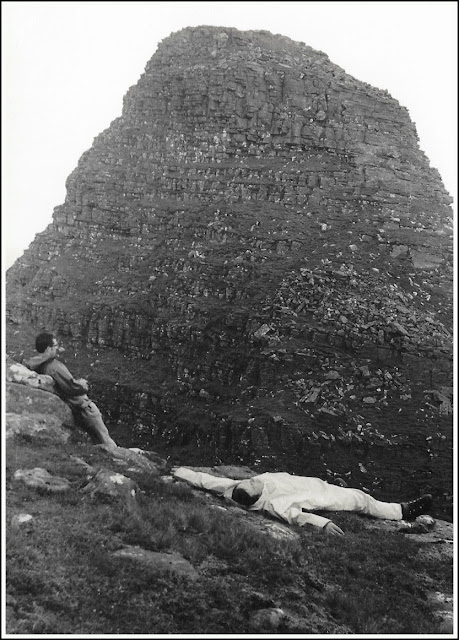 The next picture on my film (films offered a finite number of pictures in those days, and in order to avoid running out of film, careful rationing of pictures was necessary) shows Robin on the top of the higher summit, Caisteal Liath (731 metres). 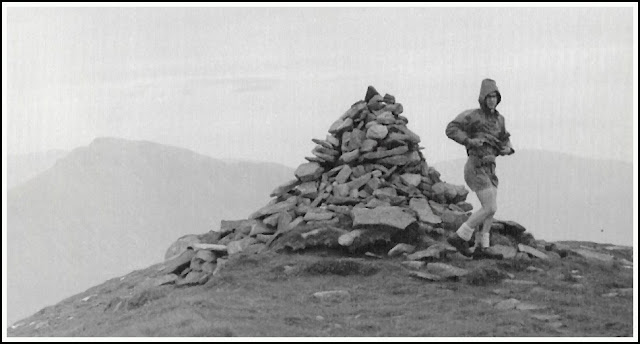 Looking back to Meall Meadhonach, you get an impression of the excitement offered by this mountain, despite its modest height. 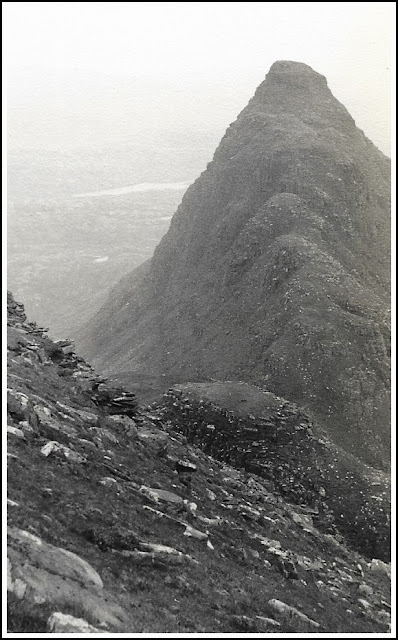 Back at or near the col, another brew stop. That primus is still somewhere amongst my camping gear, I think. 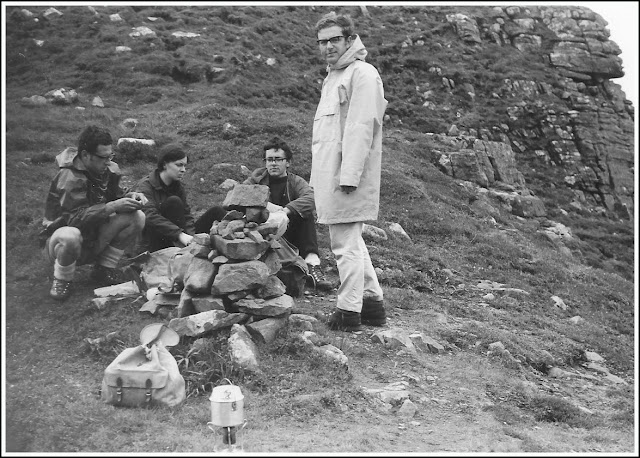 It started to rain. Stac Pollaidh was just about visible through the mist. 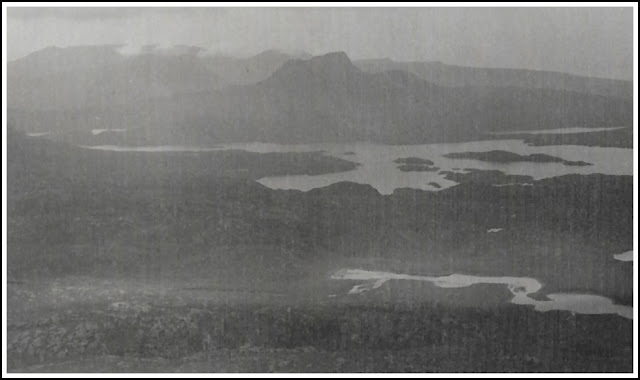 We descended to the north, very steeply at first, returning to camp via Lochinver, where I suspect we succumbed to 'ample refreshments'. 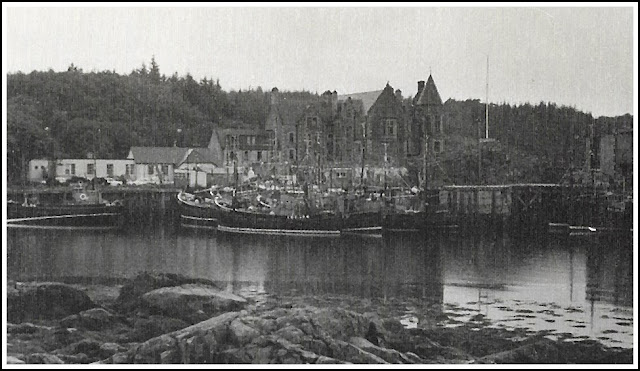 The circuit we took is shown below. It's about 30 km, with around 1500 metres of ascent. A longish day out. This trip formed a template in my mind, and all my subsequent ascents of Suilven (so far as I can recall - none is recent) have been by this same route, usually with me leaving my companions in the pub in Lochinver whilst I jogged back to Inverkirkaig to collect the car! 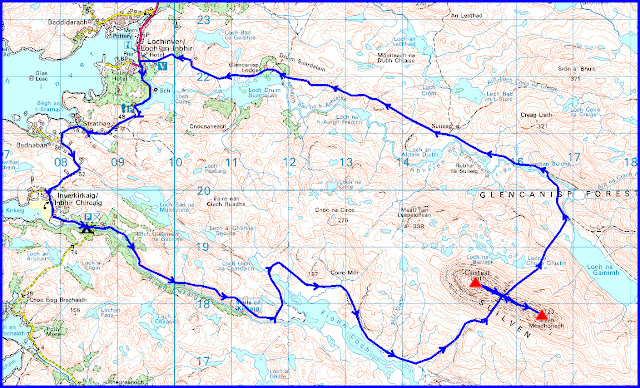 I hope that Jim and Cath, Robin, and Neil all enjoy these reminiscences, and feel free to provide additional comments (and corrections?) based on your own memories.
* Neil comments: The lady owner charged 1/- (shilling). When we asked was that 1/- each she said "No, just a shilling." [Wow, what a memory!]

That really is nostalgic. The black and white photos, the more rudimentary clothing, and that sense of youthful and slightly naive adventure. My ascent is dim in my memory a few years earlier with two or three of my wilder companions at the time .I have no written record or photos. I reckon even a few years earlier than your ascent photography was even less common and available. I remember it being a long long day and meeting an archetypal Scottish gamekeeper with a dead deer slung over a pony.

I'm glad you enjoyed this Conrad. I do actually have colour slides from an earlier trip that I must 'process' sometime. Jim and Cathy were on that trip as well.

I'm tempted to post a few more pictures from this 1970 trip, rather than restrict them to a Dropbox file for those present.

I have most of these in my photo collection, I think I took prints in the Tech darkroom. I have others with you in which I'll post separately.

Brilliant, thanks Neil. I suspect my photos were all developed and printed in our downstairs toilet in Guisborough, which doubled as my darkroom after my finals debacle. My son still has all the equipment, though I don't think he has used it to the same extent as I did. I'll post a few more pictures later.