Having posted an entry for the 'Suilven' day - the highlight of this trip - I've decided that having processed the rest of the images, I may as well make them public. I'm sure Conrad will appreciate them.
The header image, if you can read it (click on it), is what amounted, together with a few captions, to my diary of this trip, so I'm certainly spared the effort of transcribing a diary!
On 23 June we travelled from Glasgow - probably from Robin's parents' house, as I think the car we used was Robin's father's vehicle. We set up camp some way north of Ullapool, in the Inverpolly Nature Reserve, in the Aird of Coigach area. [By Loch Lurgainn, below Stac Pollaidh, according to Neil, and that makes sense.] Ben Mor Coigach is the mountain behind Jim and Cathy's luxury accommodation. I think I used a Blacks Good Companion tent. 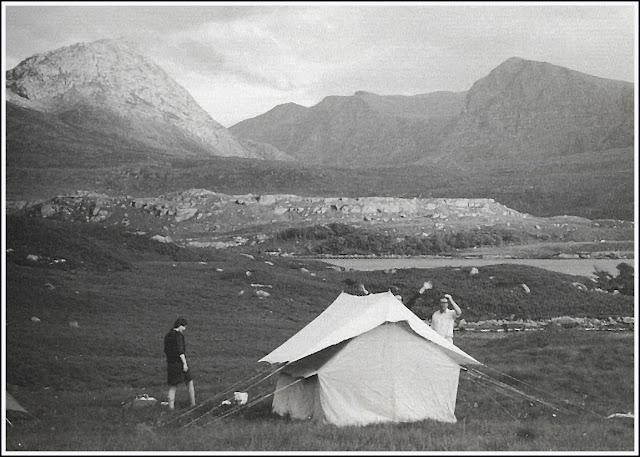 On 24 June, we climbed Stac Pollaidh, possibly directly from our camping spot. 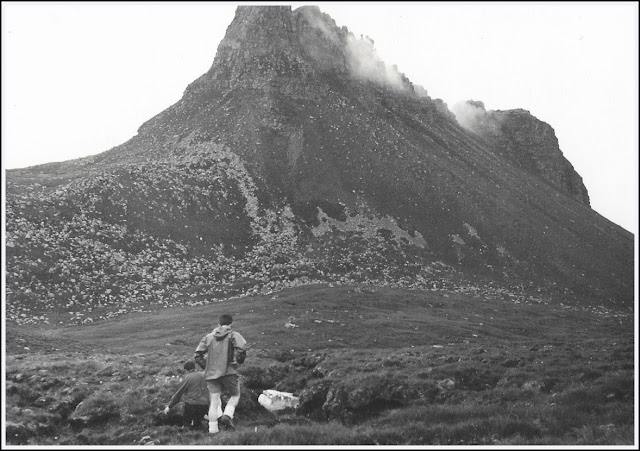 In those days we used Walter Poucher's 'The Scottish Peaks' 1965 edition as our guide book, if any. He refers to a picture of the 'Lobster's Claw' pinnacle taken in 1948, and claims to have been unable to find it subsequently. Despite the mist, I'd like to think we did find it, though a small boulder on the top of the right hand part of the claw seems to have been eroded between 1948 and 1970, possibly due to winter frosts. 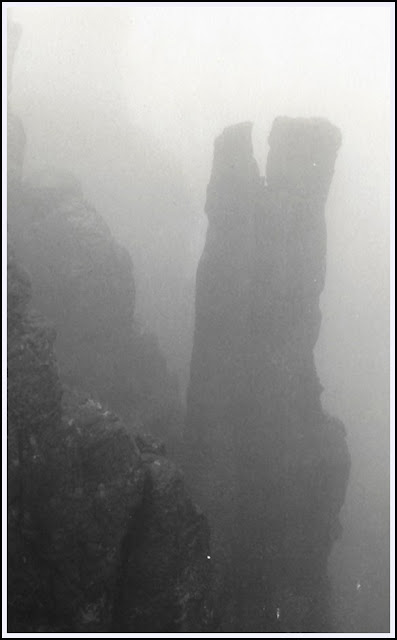 On 25 June we travelled to Durness, where Jim completed his journey by tricycle. 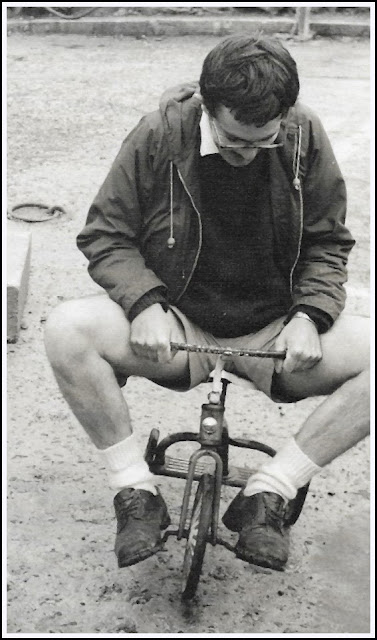 We visited Smoo cave [where Neil reckons we played football out of the rain], and Sango Bay. I have no record of a campsite. Perhaps we stayed in the Youth Hostel. 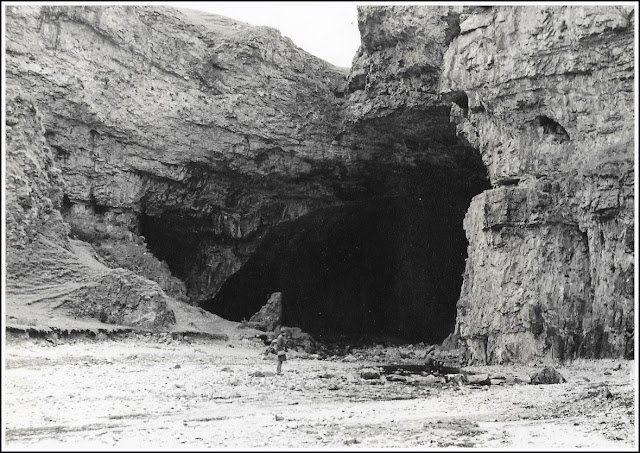 On 26 June, we took the ferry across the Kyle of Durness, then the minibus to Cape Wrath. I think this ferry may now have been superseded. 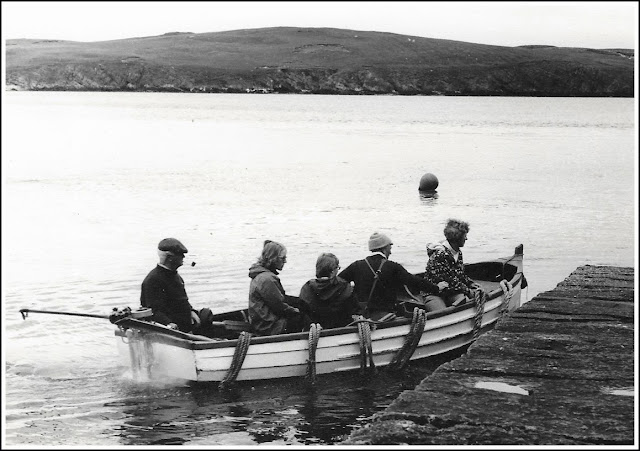 Lunch was taken at Cape Wrath, with surf crashing on the rocks below. 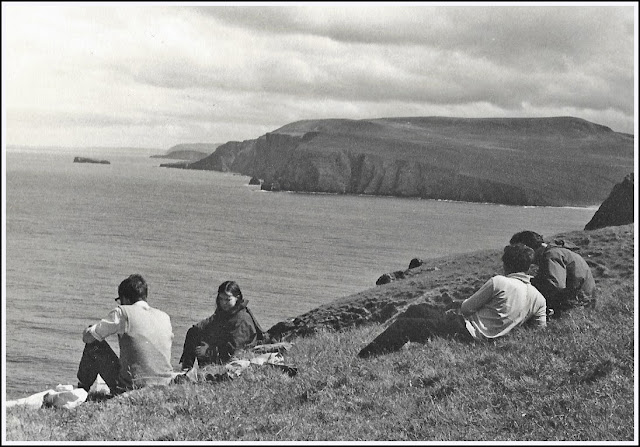 After returning to Durness, we travelled via the Kylesku ferry and the scenic back roads to Inverkirkaig, just beyond Lochinver.
En route, we paused at a viewpoint where Canisp and Suilven were displayed before us. (The Standard Vanguard Estate car was something of an improvement over Howard's Austin A40 Devon Estate car that we'd used on an earlier trip.) 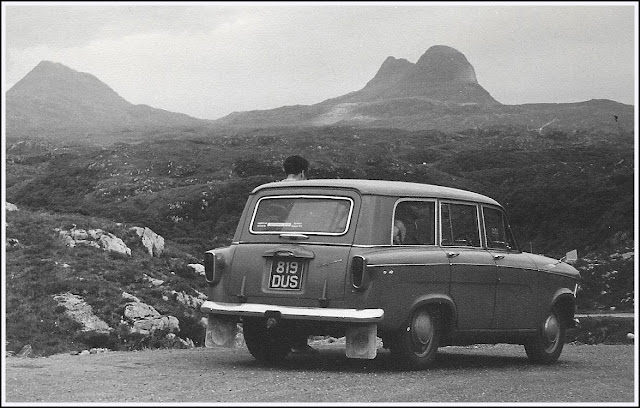 Some year's later, the view remains the same but the car has moved on... and that was 15 years ago. 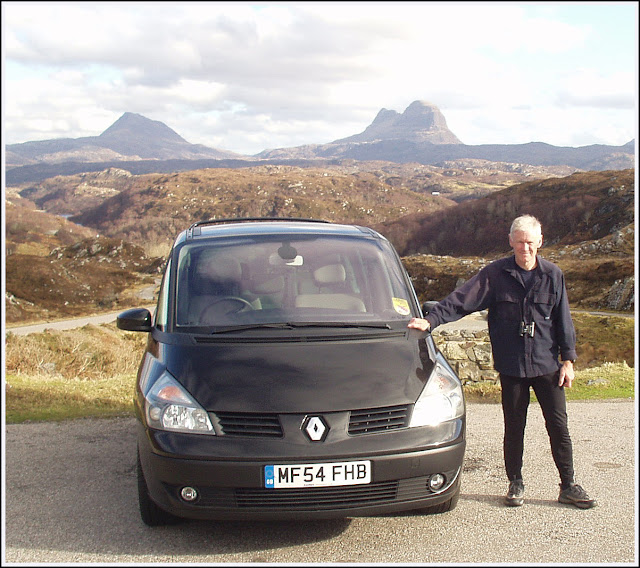 On 28 June, after our day up Suilven, we drove via Ullapool to the remote location of Slaggan Bay. This included the first of many pauses in journeys for me at the Corrieshalloch Gorge, where the car park always seems to be full of chaffinches ready to mop up any crumbs - there were quite a few of those on this occasion by the look of it! 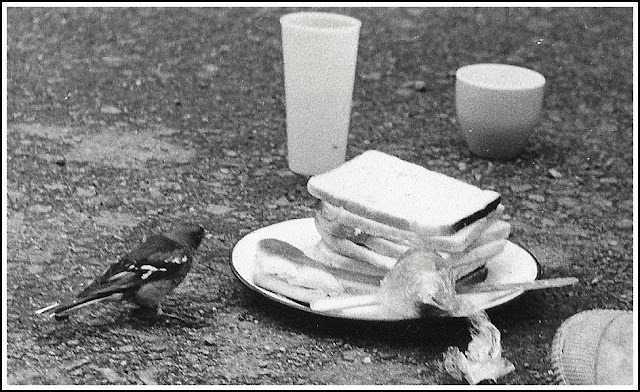 Here's our camp at Slaggan, I think the tents are almost visible in the picture of the bay below. 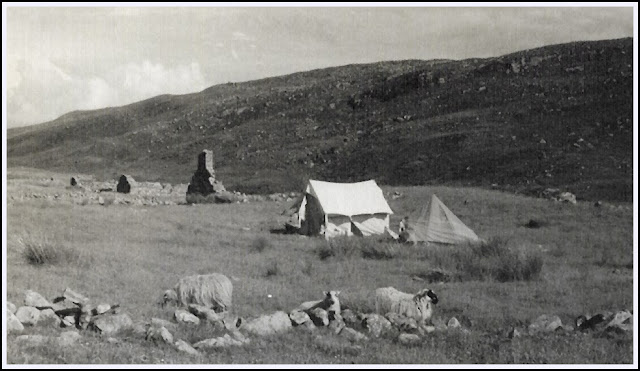 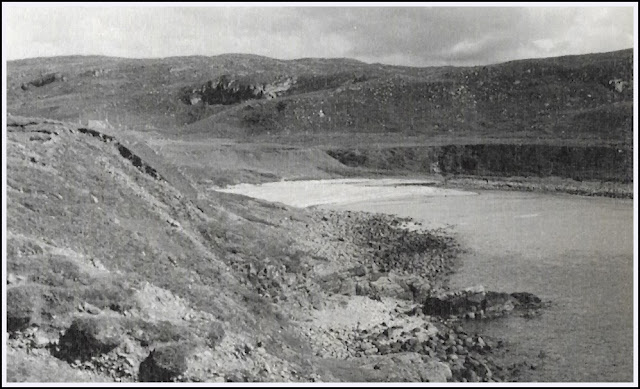 From here, on 29 June, we took a stroll to Greenstone Point, and we watched otters frolicking in Slaggan Bay.
I'm not normally a 'Poser', but I do remember setting up this self-timed picture. It may have been in my 'Zorki 4' camera period. 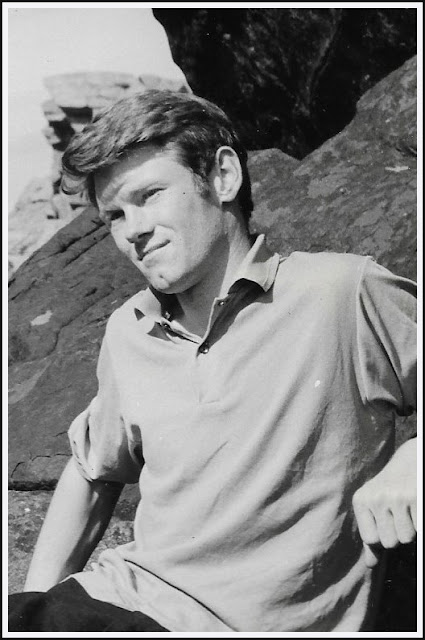 On 30 June we had a day out to An Teallach, which we got part way up before Jim's ambition to become a Waterworks Engineer took precedence over any mountain climbing objective. 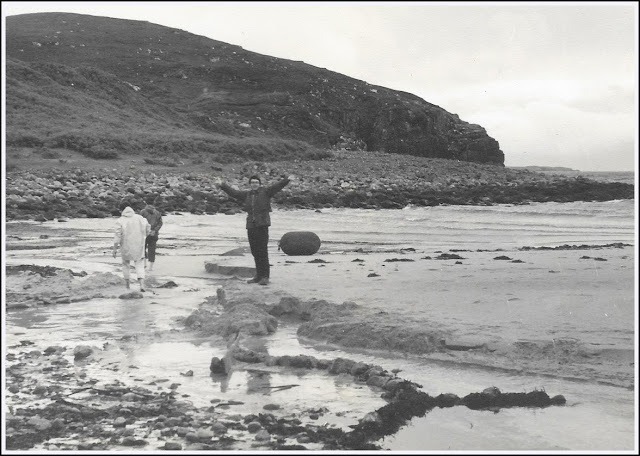 1 July saw us heading down to Glencoe, via Inverness, and of course via the Ballachulish Ferry, there being no bridge in those days. We stayed at the Red Squirrel site, as on future visits. 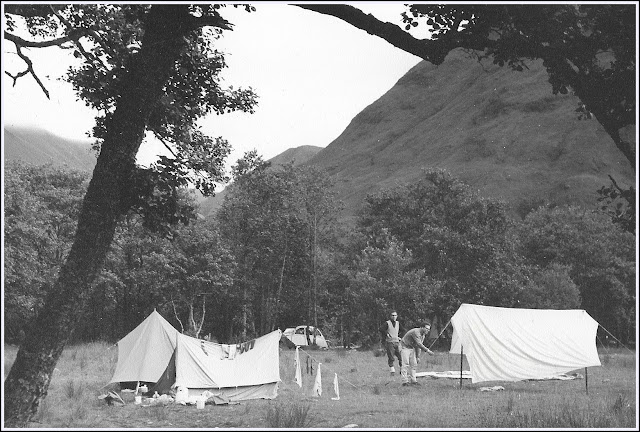 We ambled around on 2 July, here beside the River Coe, with the intimidating ridge of Aonach Eagach unavailable due to a cloak of cloud. [Neil adds: We, Neil, Martin, Robin, hired a small yacht on Loch Leven for an hour or so.] 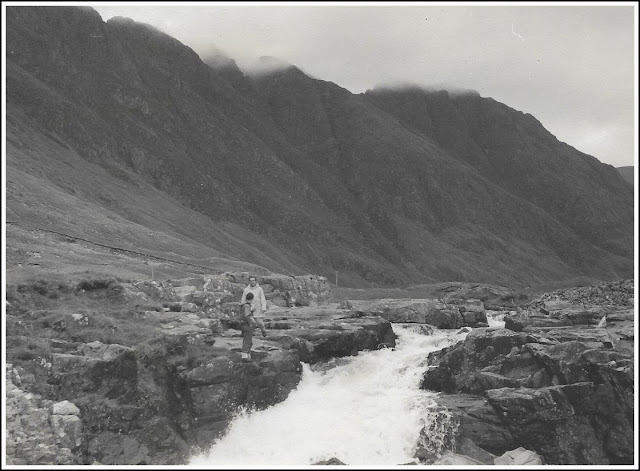 We drove to Glasgow on 3 July, and then on 4 July I must have got a lift to Brampton, where in a call to my parents I discovered that I'd failed my biochemistry finals. 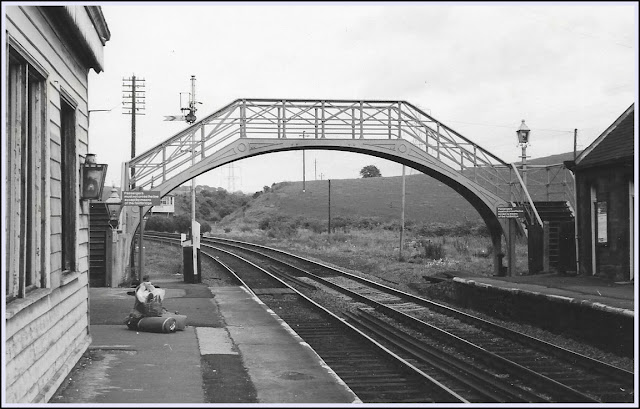 Never mind. I got the train home to Guisborough, and after a few months as a fork lift truck driver at the Blackett Hutton steel foundry, I (re-)learnt the metabolic pathways that provided the certificate which gained me a position as an Articled Clerk (£70 a month - wow!) with the firm of accountants where I spent the rest of my working career.
Later: here are three more pictures, perhaps taken by me, but supplied by Jim:
At the Inverpolly campsite
Neil 'climbing'
At the Red Squirrel campsite in Glencoe 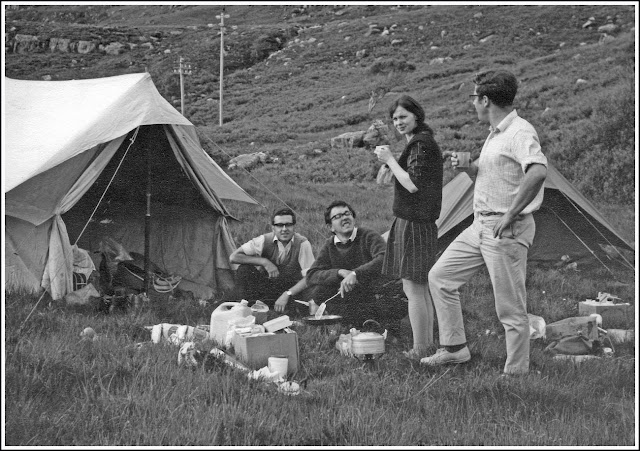 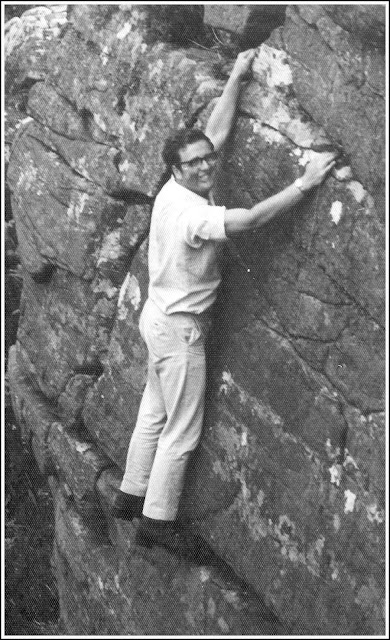