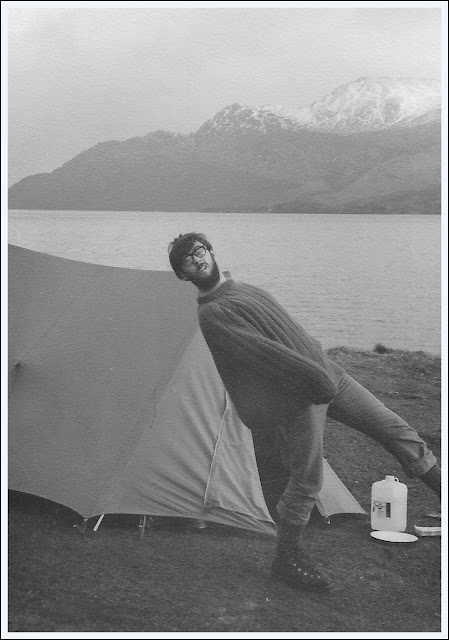 Here's a trip with a few photos but no diary entry. I'll do my best to remember it, and Mike may provide some additional comments that I'll add later.
I'm pretty sure it was Easter 1972, and we probably travelled up to the Loch Lomond area on the Thursday or Friday. I'll assume Thursday. I would guess that the top picture was taken the following morning, 31 March, possibly at the Ardlui campsite by Loch Lomond.
My companion was my schoolmate Mike, who has appeared previously on these pages as 'Poor Michael', my hapless mate on the rather inclement TGO Challenge of 2011, and on an earlier 'training' walk in the Lake District.
I think the next picture was probably taken looking back to the Ben More range, site of my first Munro 'bag' in 1968, from north of Crianlarich. 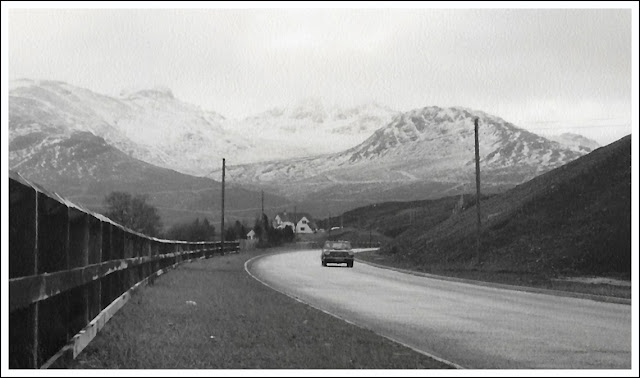 We were traveling in my first car, a 1964 Mini 850. I had it from 1971 to about 1976, and took the mileage from 30,000 to 100,000 before crashing it. At this point in 1972 the passenger floor leaked, so I'd waterproofed it using a unique blend of glass fibre and the old metal 'Marvel' tins. This worked a treat, but didn't stop the leak into the car. On this trip, Mike found the water level in his footwell steadily rising as we progressed north in the rain. Eventually he found a pan with which to bale out. Unfortunately the sliding window didn't open wide enough, and he managed to empty the pan all over himself. When I got home I drilled a hole in the floor of the car. 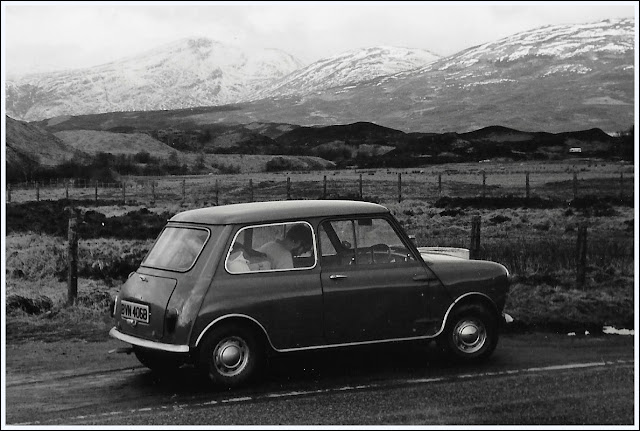 We headed north, through Glencoe. 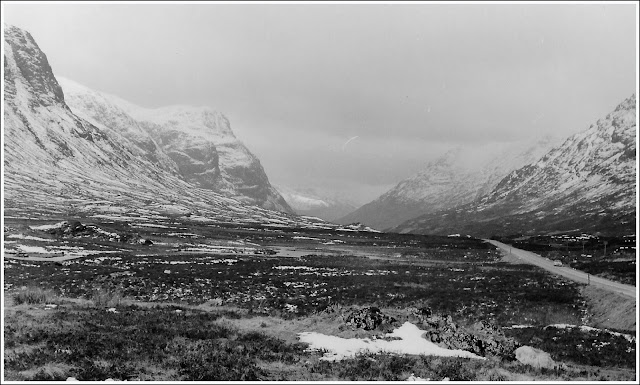 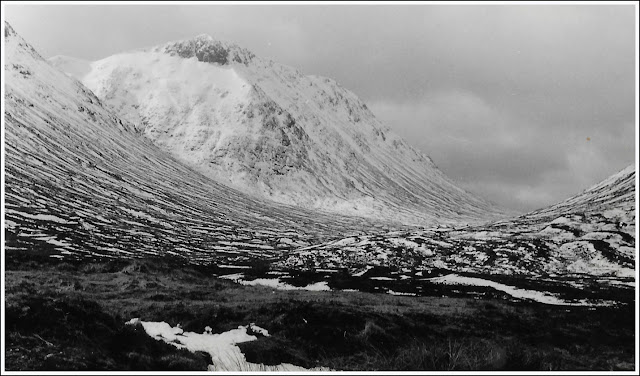 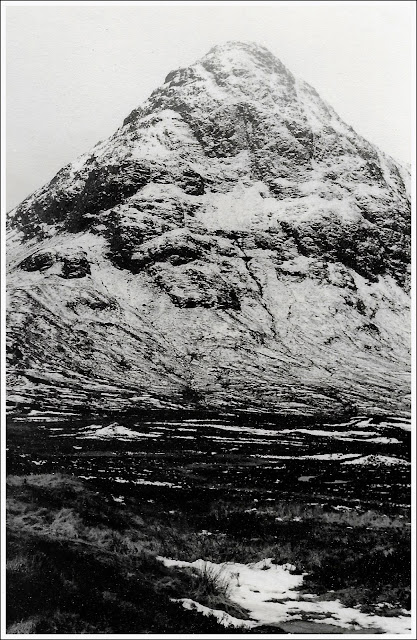 We stopped at the War Memorial, and admired the view towards Ben Nevis.

By the time we reached Loch Cluanie, we were ready for a walk. So we headed up the Five Sisters ridge, aiming for Sgurr an Fhuarain. 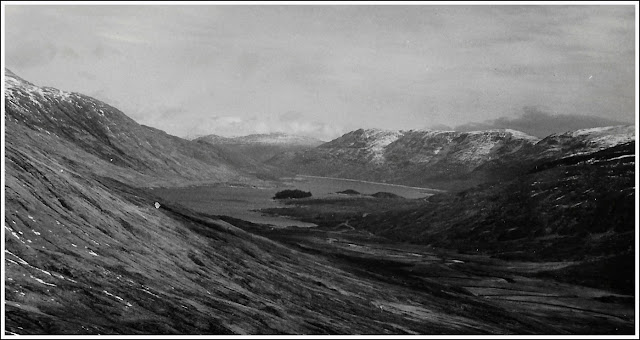 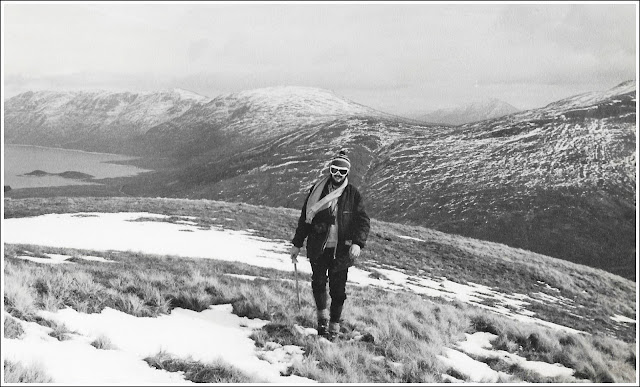 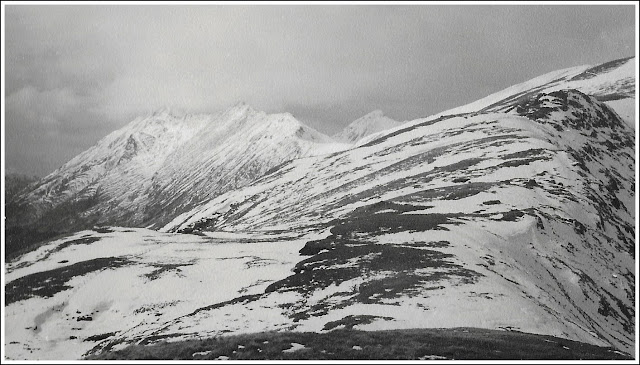 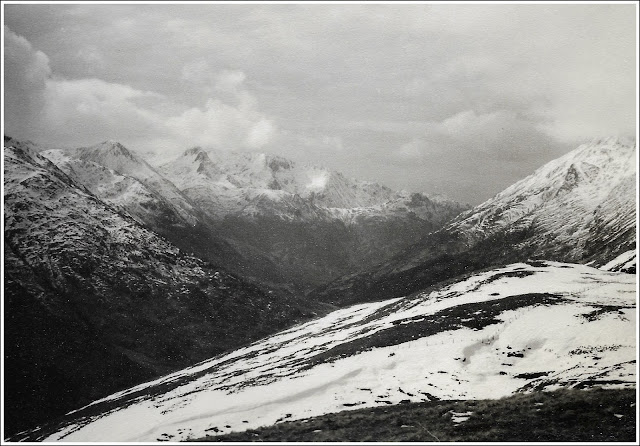 We didn't reach the summit, but it was a good walk in the mountains. Here's a panorama constructed from the last two images - a fine view - click on the image...

Then we headed onto Skye, and the single track road (most were single track then) to Glenbrittle, pausing on the way at a viewpoint. 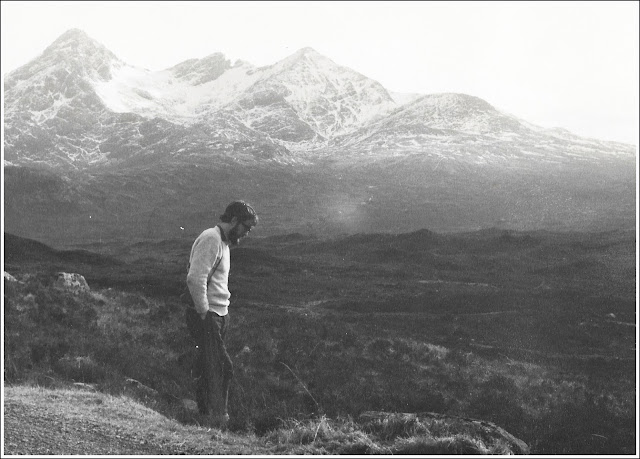 The next day (Saturday?), I think we must have toured around on a dreich day, during which we undertook a short coastal walk and I took just one picture. 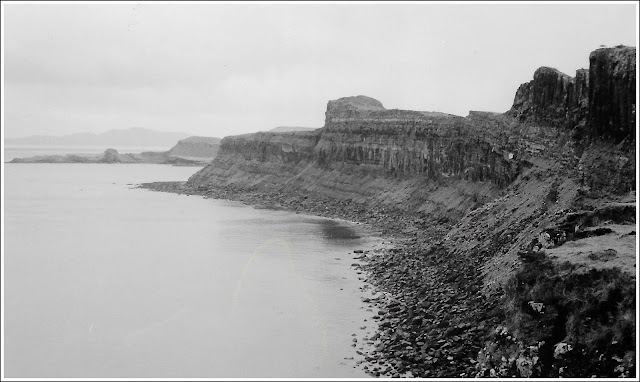 Then on Sunday we enjoyed a walk in the Cuillins, heading up Coire Lagan. We set off from where we were camped, at Glenbrittle. I think there were others in the party, whom we met up with at Glenbrittle, but I can't recall who they might have been. 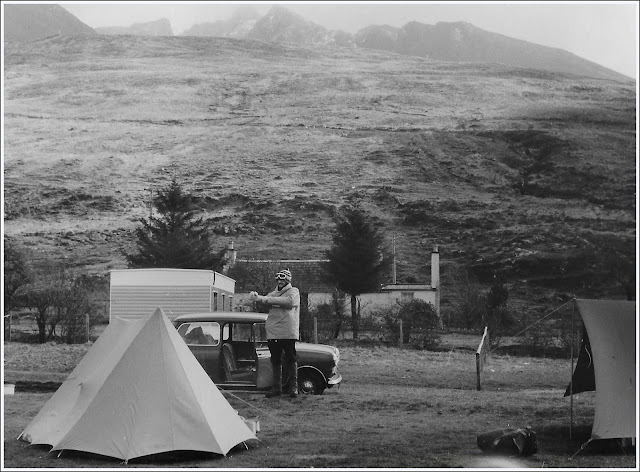 Mike is on the left in the next picture, next to an unidentified friend. 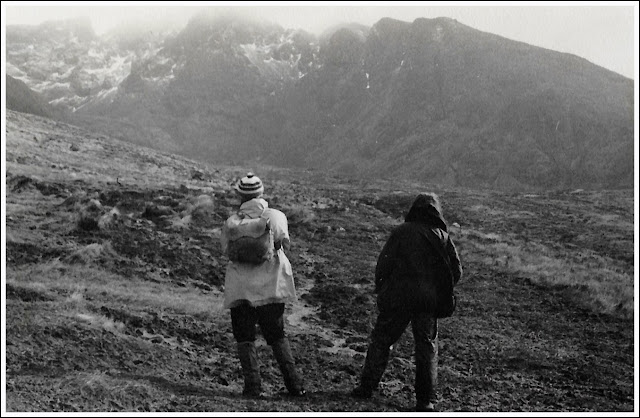 We gradually worked our way up into Coire Lagan. 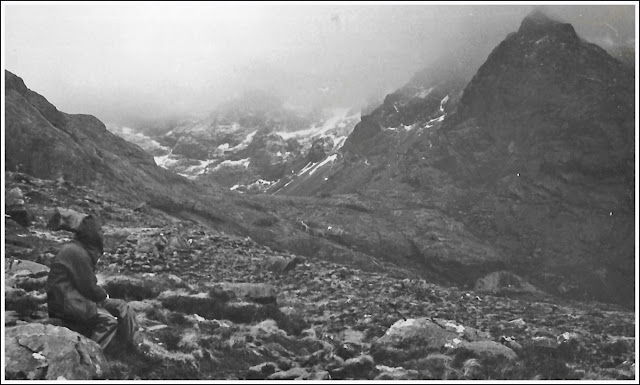 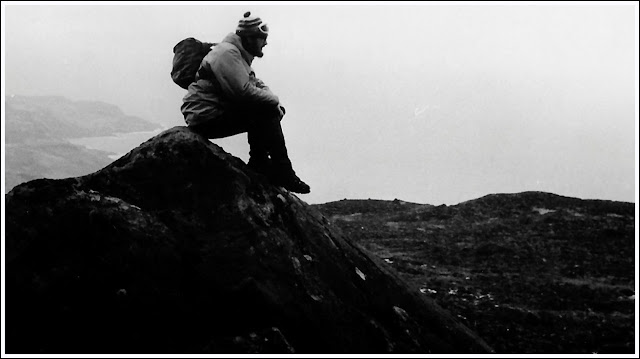 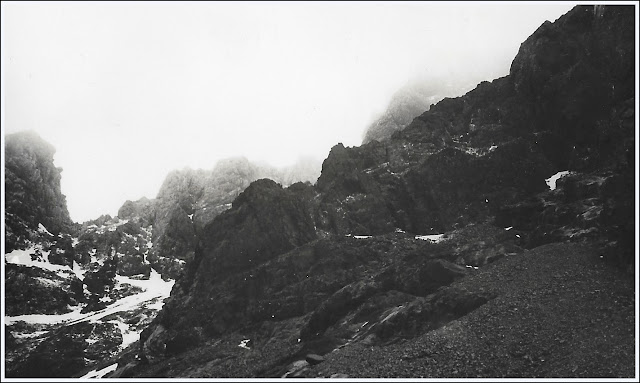 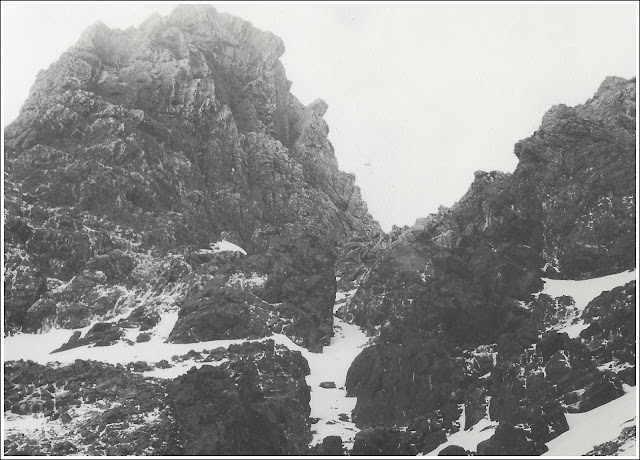 There were rocky views all around, but when we turned around we were still some way off reaching the ridge, which in the next picture is dominated by the In Pin. 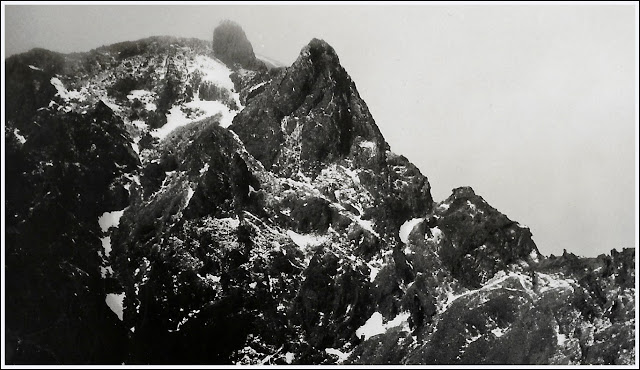 Here, we are looking back down into Coire Lagan. 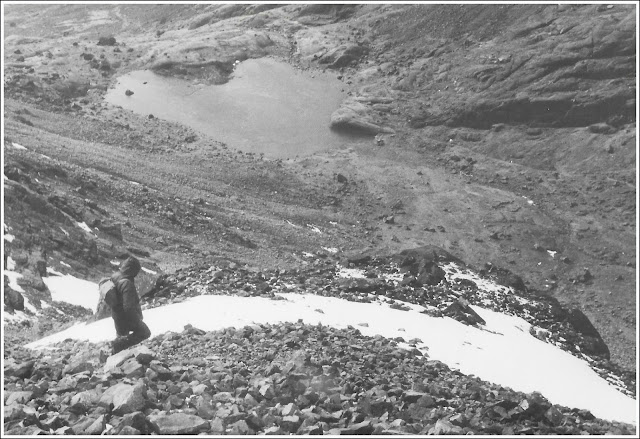 The next two pictures were taken in the direction of Sgurr Alasdair, with the Great Stone Shoot looking formidable. 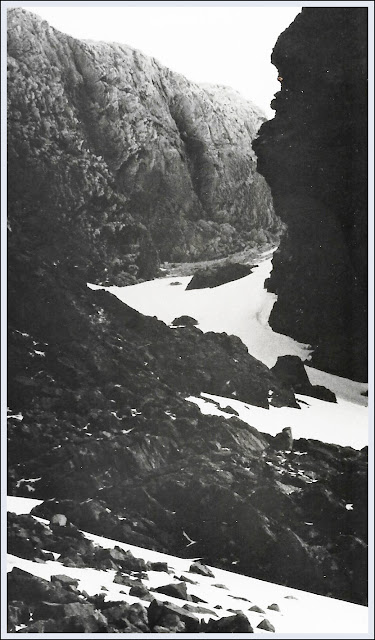 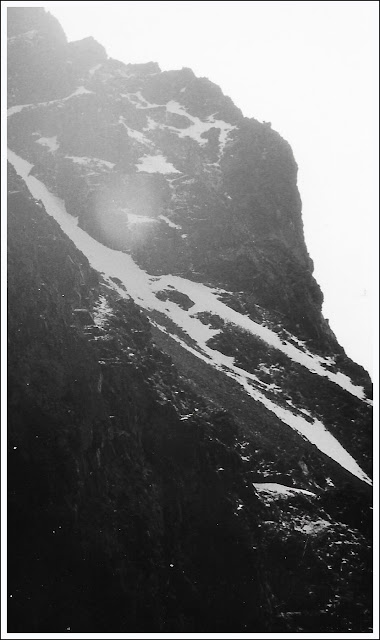 Whilst I've been up that since, on this occasion we were happy to reverse our steps and head back to camp, from where I presume (in the absence of evidence to the contrary) we headed back home the following day, Monday, in time for work on Tuesday. 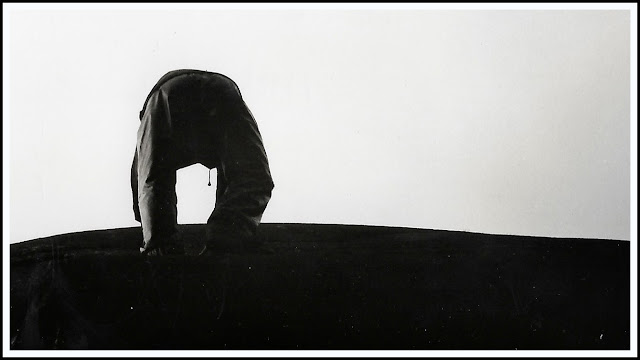 I must have dropped Mike off somewhere. Perhaps his memory is better than mine - I'll add his comments, if any, in due course.
Posted by Phreerunner at 21:36