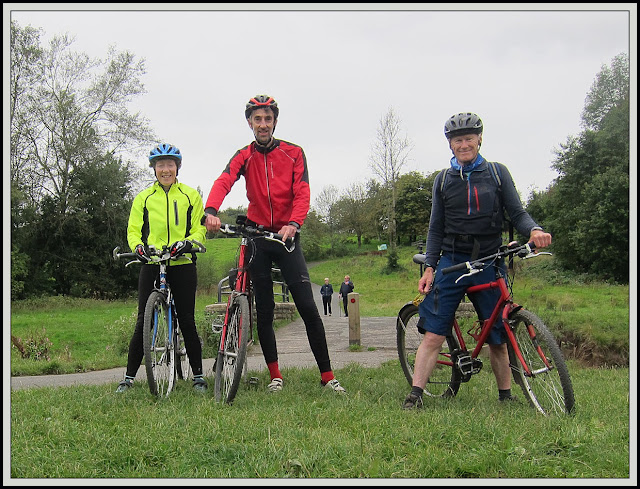 Robert and Lyn should have been enjoying themselves on a barge trip in the south of France, instead of which they have had to accept the thrills of a Staycation in Lancashire.
They invited me along on this bike ride. Our rendezvous point failed to synchronise, but they managed to track me down to the Cuerden Hall car park, from where we cycled north along a disused tram line for a short distance, 4 miles or so, to pick up the Preston Guild Wheel by the Old Tram Bridge, which appeared to be closed. 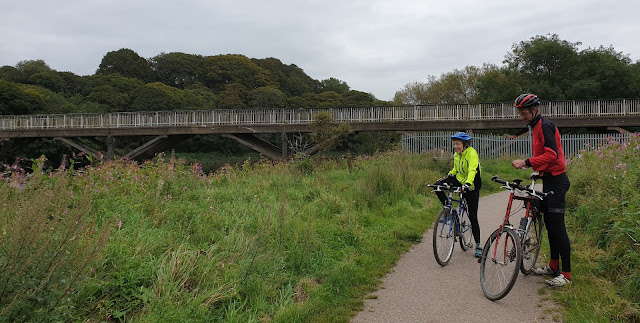 So we went along to the next bridge over the River Ribble, and took pictures back towards the Old Tram Bridge. 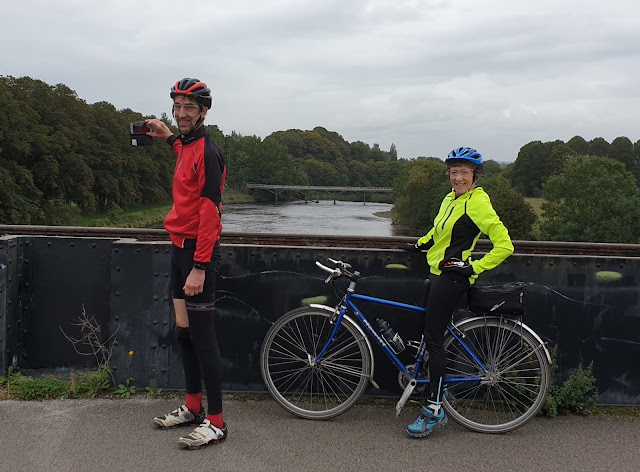 In the other direction is the Ribble Viaduct that carries the main line railway. 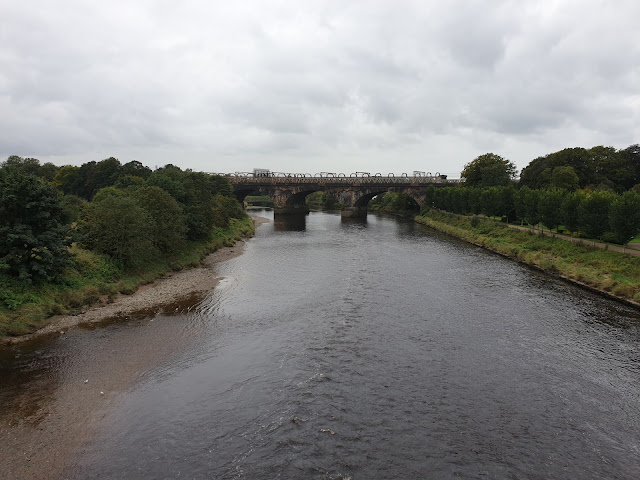 Across the bridge, we descended to join the 'Wheel' in a clockwise direction, which is recommended due to the nature of the hills (such as they are) and means you avoid any steep ascents and can enjoy some steep, if brief, descents.
The Preston Guild Wheel route was created in 2012 and is a well signposted 21 mile, mainly off-road, circuit around Preston. It has 'spokes' that lead to the City centre, and connecting routes with Lancaster, Chorley (via the Cuerden valley), Blackpool and Southport. During the ride I came to realise that Preston has a network of cycle paths of which it can be proud.
Once on the 'Wheel' we passed Miller Park, where there's an impressive municipal building and there were hordes of keep fit fanatics practising all manner of group exercises.

Littered along the route are numerous industrial relics such as the one shown below. 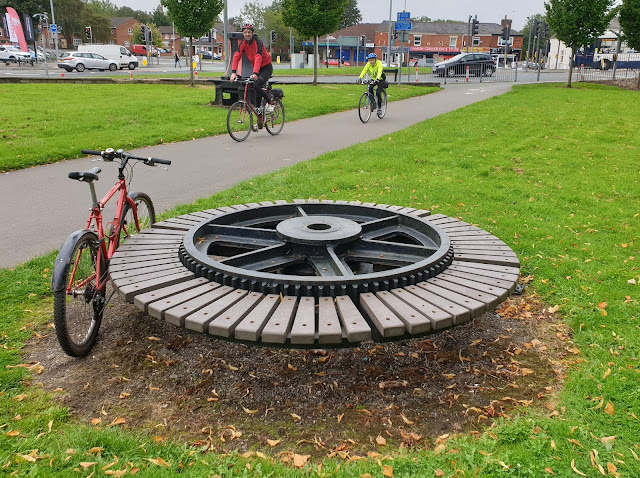 Before leaving the River Ribble and its cool headwind, we passed Albert Edward Dock, which has a large lock to protect it from the tidal movements of the river that are encountered beyond this point. 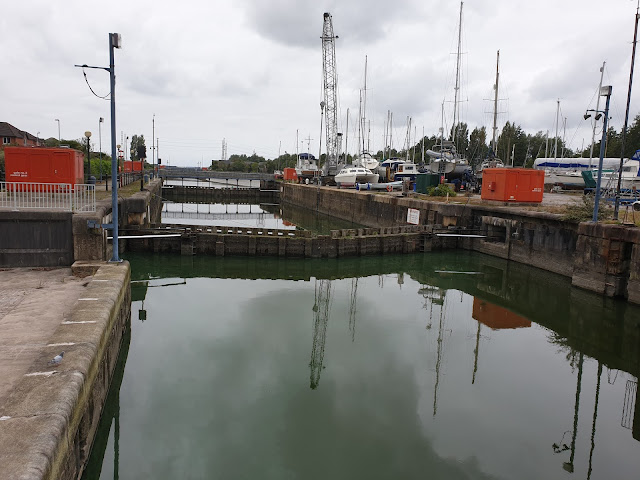 A millennium project restored the canal link between the Ribble and the Lancaster Canal. Here, on this link, a fisherman was trying to entice to his hook fish that were feeding in the lock. 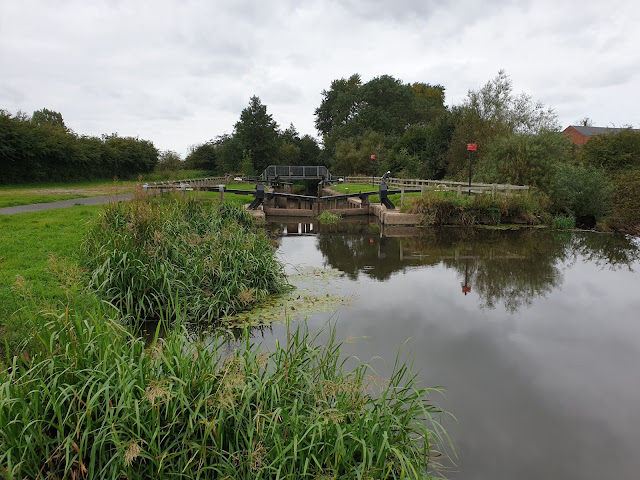 We watched him from our elevenses bench.

Soon we passed over the Lancaster Canal. 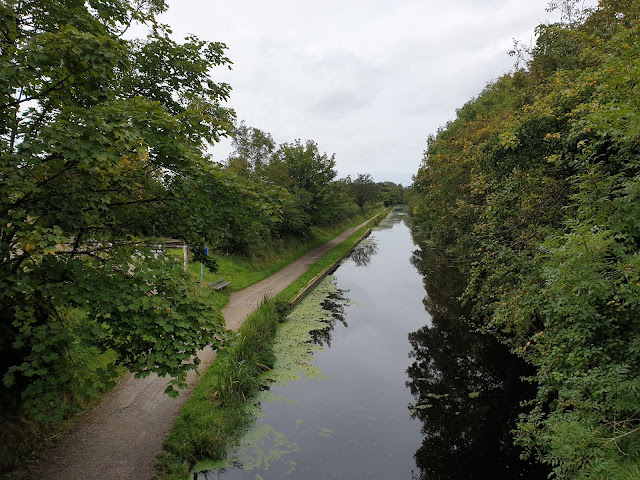 As mentioned above, the route is well signposted. 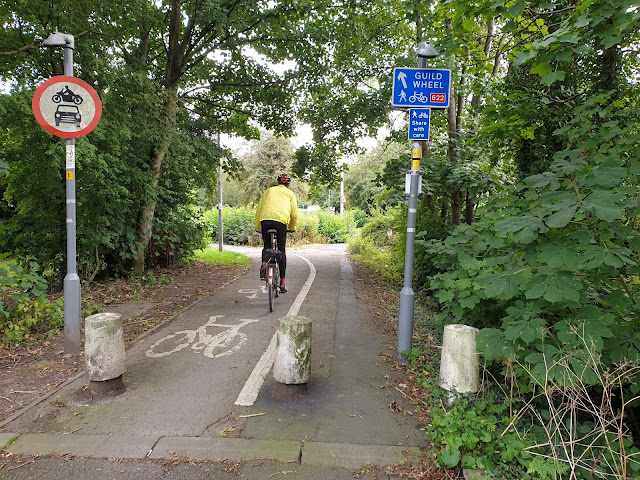 After a while the M55 motorway was crossed and the northern point of the ride was reached at Broughton. By now we had enjoyed a further break for lunch.
Broughton Pinfold is an ancient enclosure for impounding stray livestock until claimed by their owners. 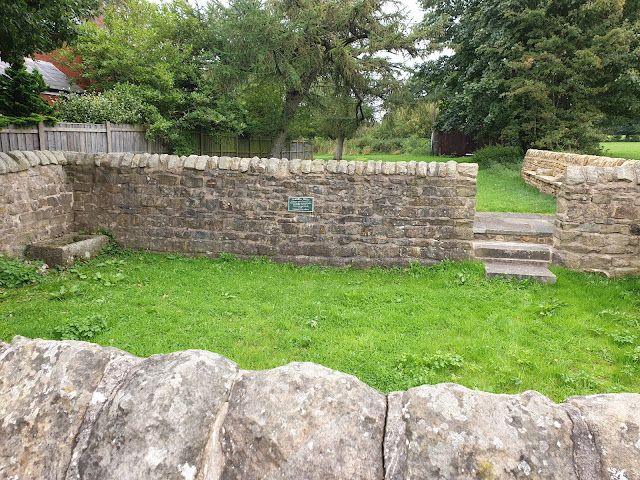 Here's a random shot of some new housing. It sort of illustrates the completed nature of many fenced in building sites that we passed during the ride. Preston is growing in size. 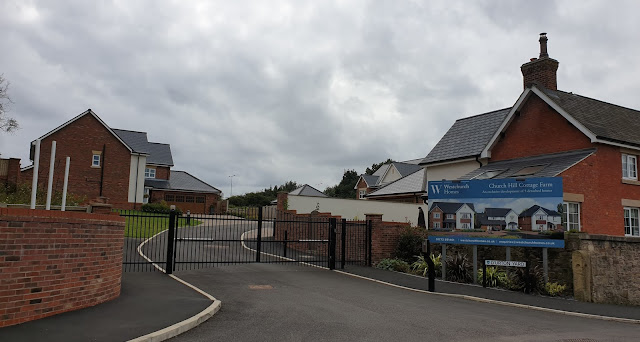 Before returning to paths beside the River Ribble, we passed through the Nature Reserve at Brockholes. A splendid place where we could have spent more time. I had a long wait at one point (never did find out why!). 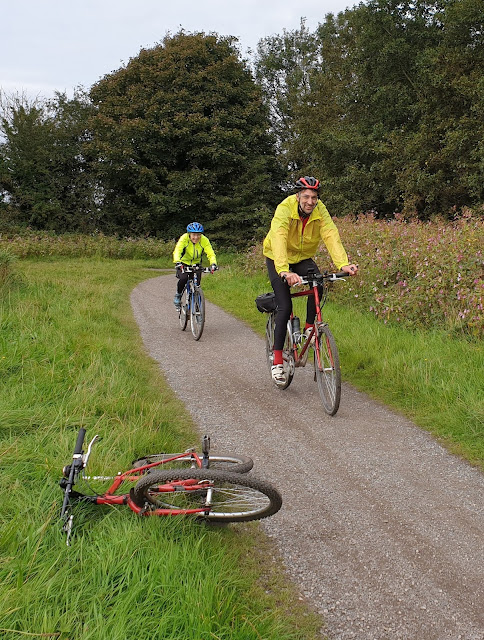 There are plenty of hostelries en-route, but not this one. 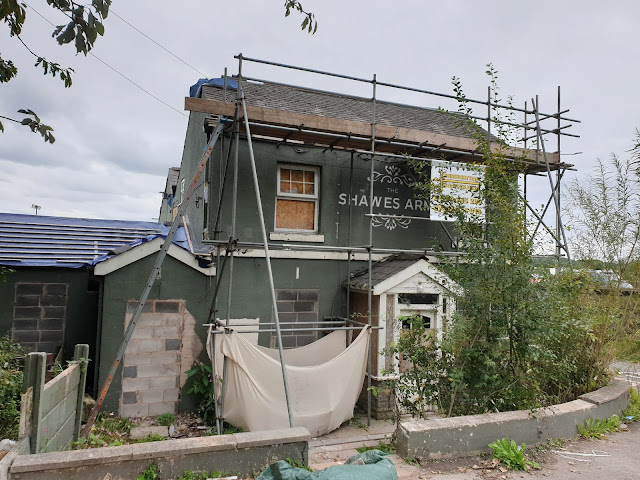 A magnificent avenue of trees led through Avenham Park, where toilets and other facilities were very much open for business. 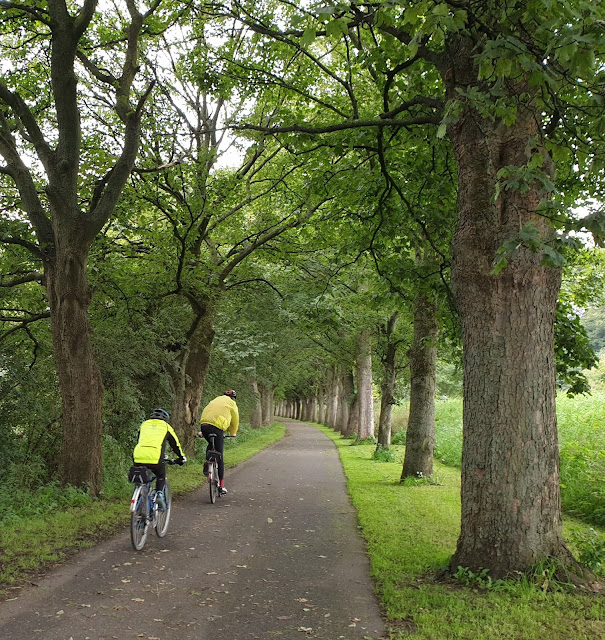 We soon found confirmation about the non-viability of the Old Tram Bridge as a route until (if) it's restored. 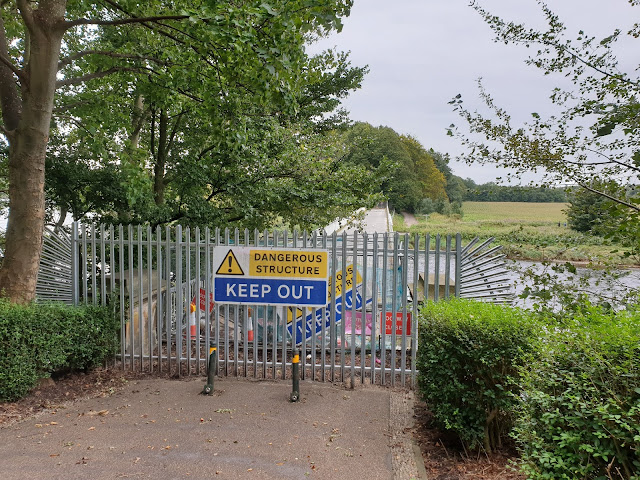 Back at the Ribble bridge, we returned directly to the Cuerden Valley, passing sculptures on the way. 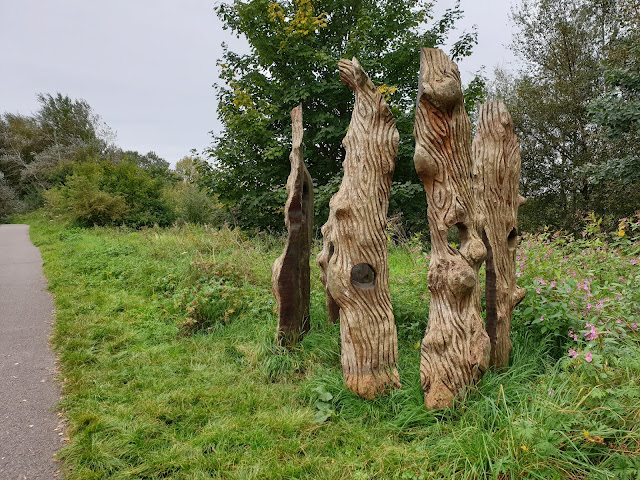 Before parting, Robert kindly took the picture featured at the head of this posting, before he and Lyn pedalled on down the valley to their free car park, and I went up the steep hill behind us, back to my £4 car park. I need to visit the bank to get more car parking cash!

Here's the route I took, in total about 50 km with just 250 metres ascent. It took a very leisurely four and a half hours. 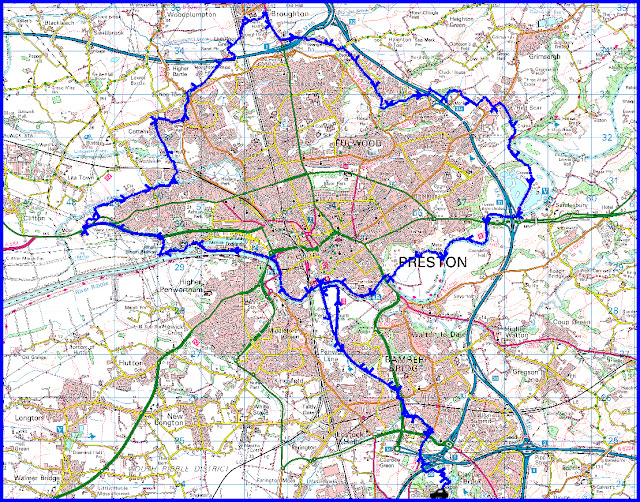 Many thanks to Robert and Lyn for inviting me to meet up for this excellent outing.
Posted by Phreerunner at 14:33

Glad you liked the 'wheel'
It is one of my all too irregular rides, living just off it.
It was good to see your photos taken from a stranger's point of view.
The northern part is suffering from all those housing developments eating up the green spaces.
A challenge is to have a drink [coffee or stronger] in every cafe/pub you pass.

A good write-up Martin. When I saw the title I was straight onto Ladbrokes putting on a fiver for there being a comment by BC when I opened up.

Haha, I didn't realise BC lived so far south. I really was impressed with the number of cycle paths around Preston, but I wasn't so impressed with all the green spaces that are being taken up with housing. Lots of high wire fences, hence the photo of a completed, comparatively up market, new development.