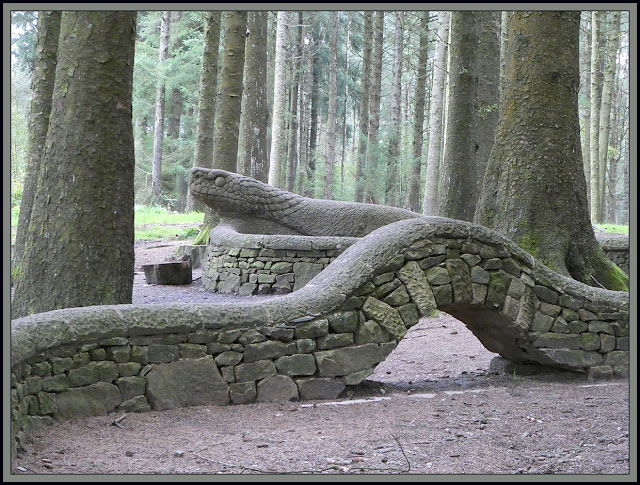 Today's venue was chosen as 'new ground'. I'd not been there before, and nor had my companion for the day, Paul S.
Our satnavs succeeded in delivering us to our rendezvous point at Beacon Fell Country Park, where car parking was free (the pay and display machines were not in use) and the toilets were open. It was very quiet. We saw just a handful of folk all day, whereas on the previous day's ride around 'the wheel' we saw loads of people.
After perusing the information board, we strolled up to the snake sculpture pictured above. 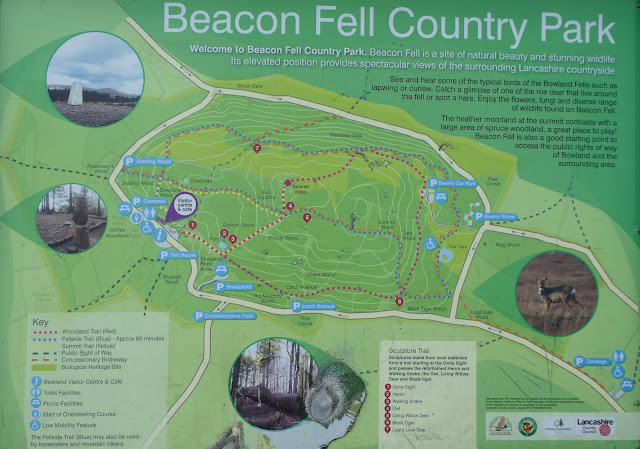 A short stroll took us to the deserted 266 metre summit of Beacon Fell. Paul leant against the trig point, with Parlick and Fair Snape Fell just poking out above the trees behind him. 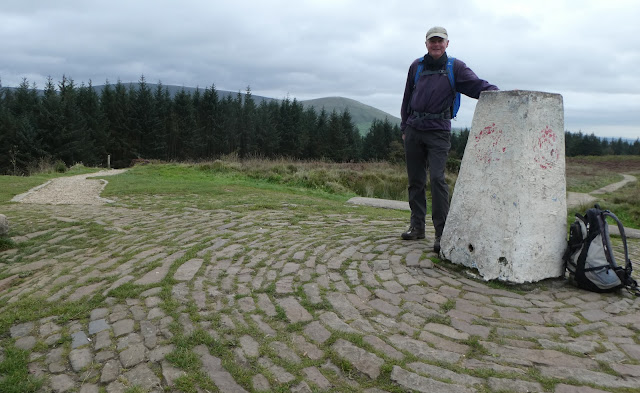 A well paved path leads eastwards to gain a variety of field paths that head inexorably towards Parlick. 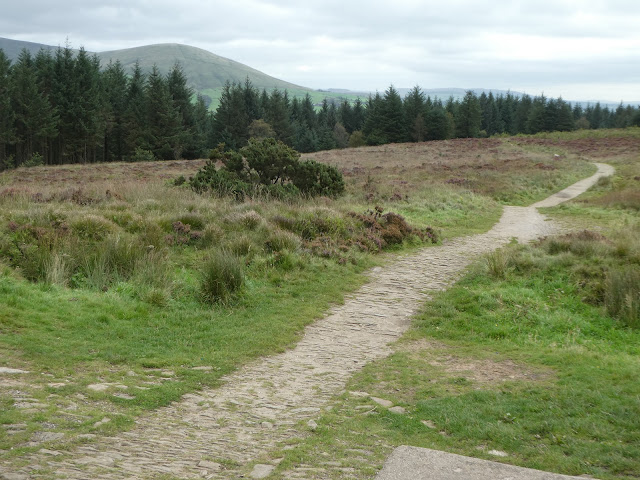 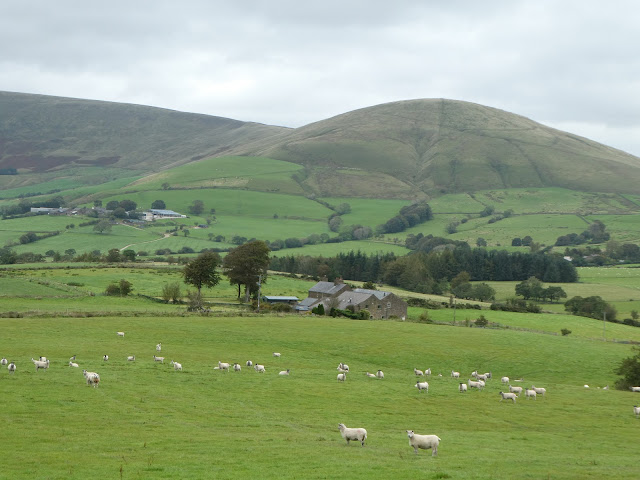 Thankfully the little used paths past Broadhead, Wood Acre, Watery Gate, Lower Core and Blindhurst weren't too boggy, and we soon ascended some steep zigzags past kestrels and buzzards to the 432 metre summit of Parlick. Pendle Hill in the distance was trying to pretend to be a cloud, and in the other direction was the wind assisted trudge up Fair Snape Fell. 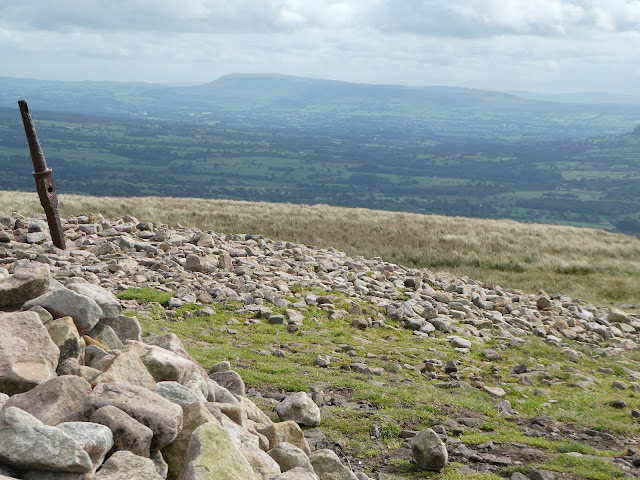 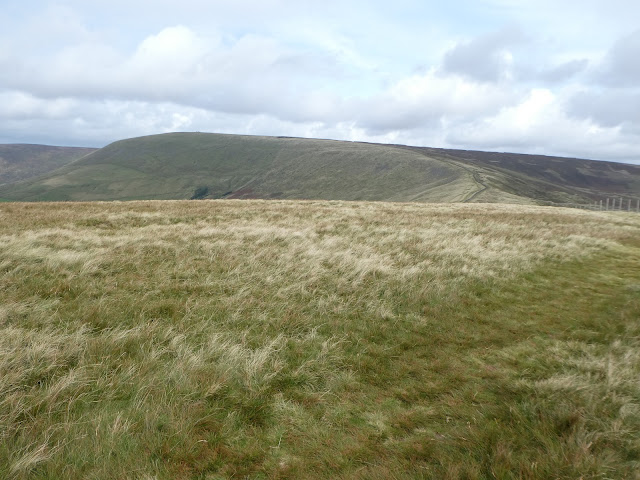 The wind break was just about sufficient for us to enjoy a tea/coffee and cake break, though windproof tops were donned and our peaked caps were replaced by winter hats. 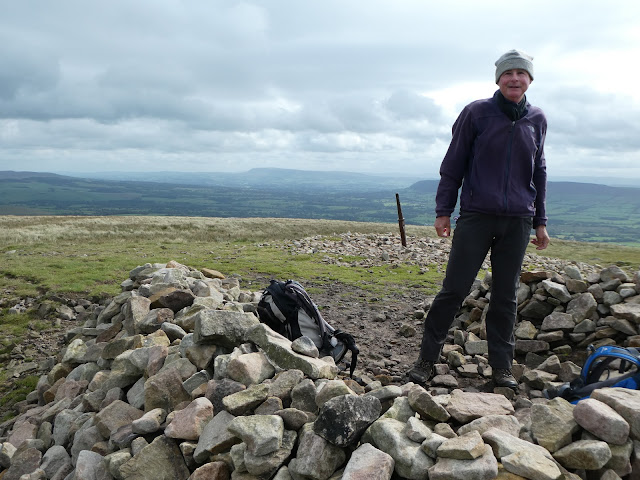 After descending to Blindhurst Fell, where we didn't spot 'Nick's Chair' [BC?], we sought protection from the wind by way of a high wall. Here's the view back to Parlick. 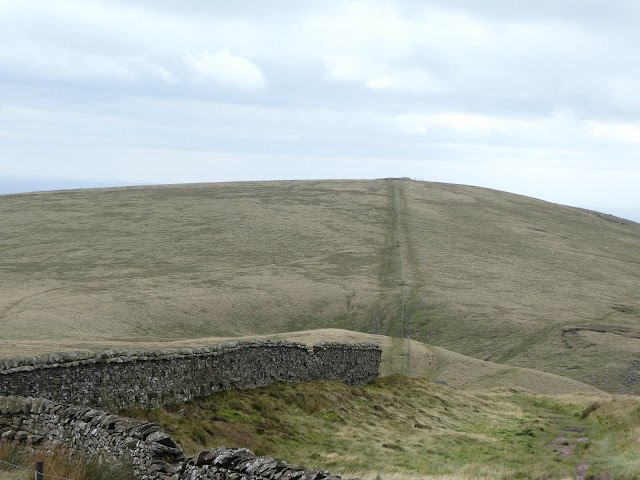 Parlick is also featured in the next picture, of me on the (not the) top of Fair Snape Fell (510 metres). 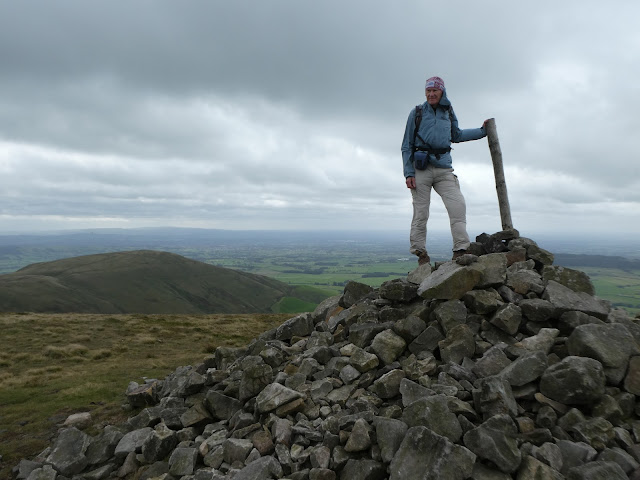 It was pretty windy, so we wandered around the summit for a while but saved our lunch for later. An elderly lady was there.
This was the only point on the walk that I found myself at a place that I'd been to before - in March 2015, from a completely different direction. And I note from that report that we didn't actually reach the true summit of Fair Snape Fell on this current occasion, the trig point and cairns being a few hundred metres from the true 520 metre summit. 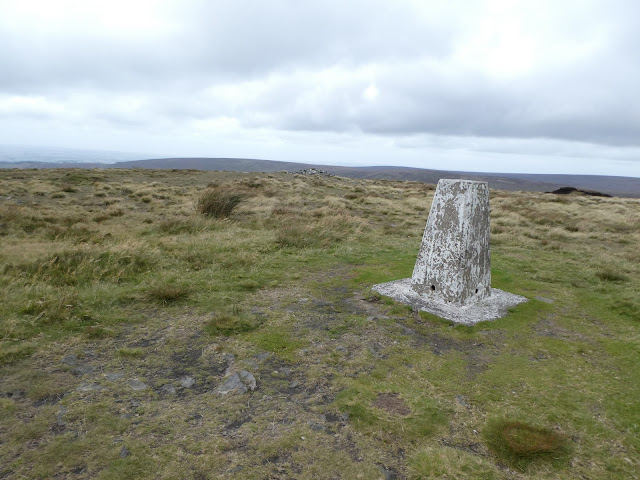 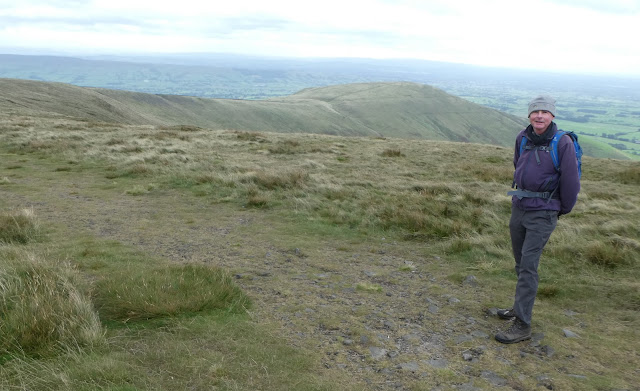 We soon found a zigzag path on which to descend to Higher Fair Snape, from which there was a good panoramic view to the west, with Beacon Fell to the right of Parlick in the next picture. Blackpool Tower was just discernible on the western horizon from here and from the higher points of the day's walk.

This area is not suitable for those who are unable to negotiate high ladder stiles. The metal kissing gates of Cheshire have not yet been exported to these parts. 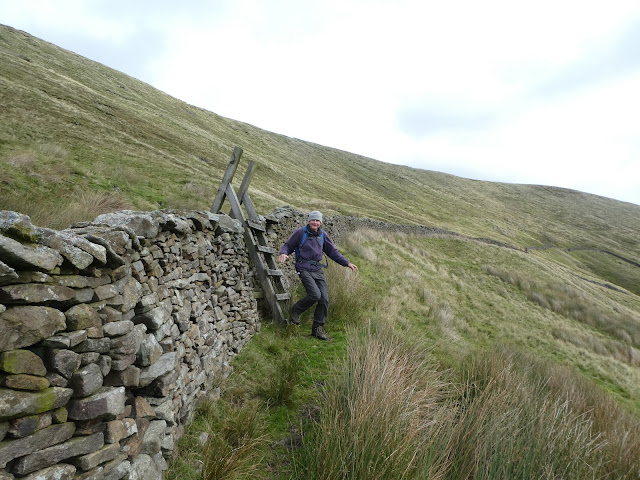 We soon enjoyed our lunches on a grassy bank, before finally reaching Higher Fair Snape, where the fence decorated with unfortunate moles probably gives an indication of the local attitude towards the Hen Harriers that try to live peacefully nearby. [BC may comment.] 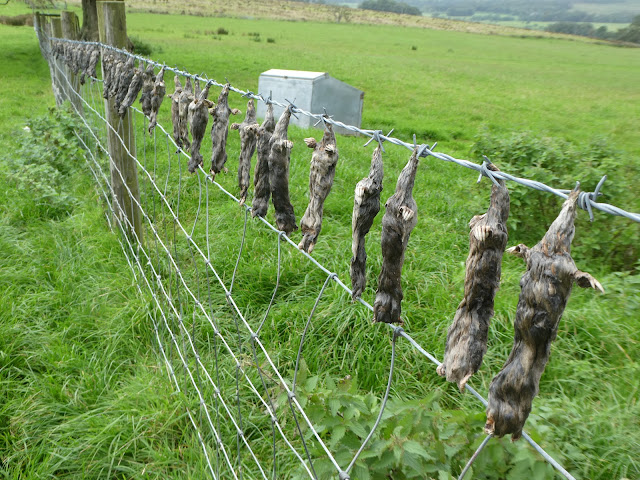 Looking back up to the fell, we were puzzled by this area of apparently dead grass. Why? 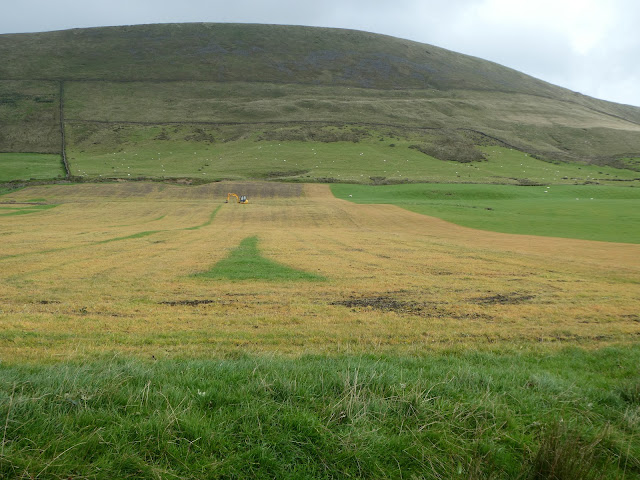 Few people, it seems, walk these paths in view of Parlick. Even fewer care to maintain the footpath signposts. 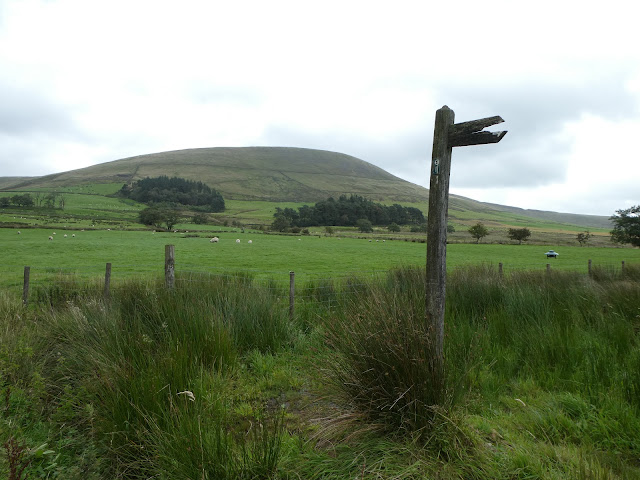 Easy paths and tracks led us to the hamlet of Bleasdale, and an impressive church for such a small place. 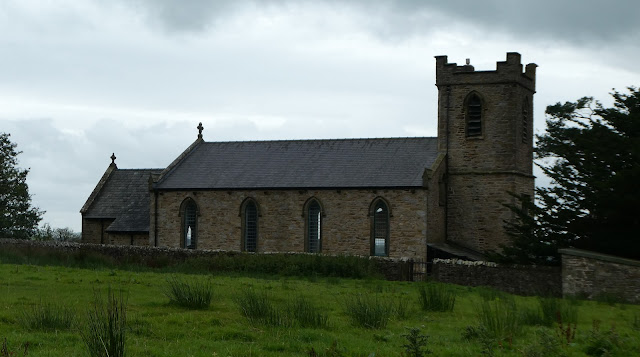 We passed a signpost to Bleasdale Circle - accessed by a permissive path. We should have taken it. A little further on we came across this information plaque. According to this, 'Permission to visit the Circle may be obtained from the headteacher of Bleasdale School', which appeared to be closed. 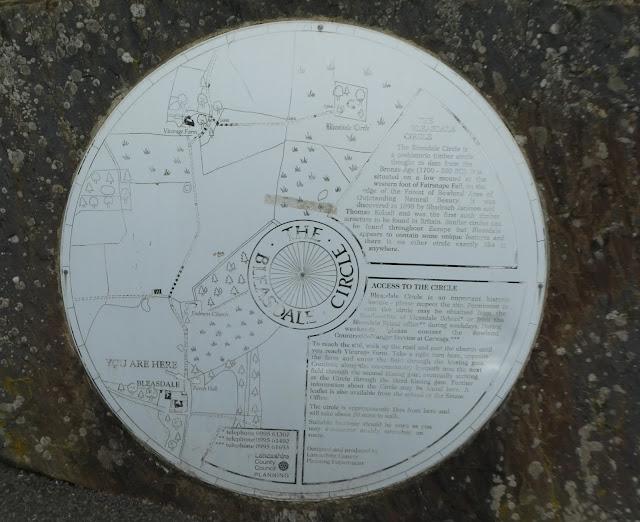 The circle that we failed to visit is a prehistoric timber circle dating from the Bronze Age (1700 to 500 BC). It may denote a religious centre, and it was only discovered in 1898.
There's a leaflet here, and BC, who commented on my previous posting, has written about it here, back in March, just before Lockdown. He confirms that the school has been closed for a while.
I was looking forward to the next section of our walk, beside the infant River Brock, a tributary of the River Wyre. Starting near Weaver's Farm, a good path led us to a footbridge between Bob's Wood and Gill Barn Wood. Two ladies and their dogs were chatting in the meadow. Can you spot them below? 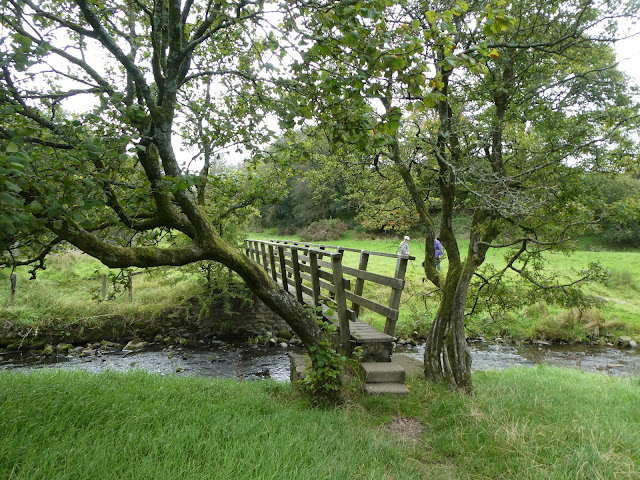 Waddecar Scout Activity Centre was soon reached. It's facilities extend over quite a wide area, and the public are requested to stay on the paths. There's a good view back to Parlick and Fair Snape Fell. 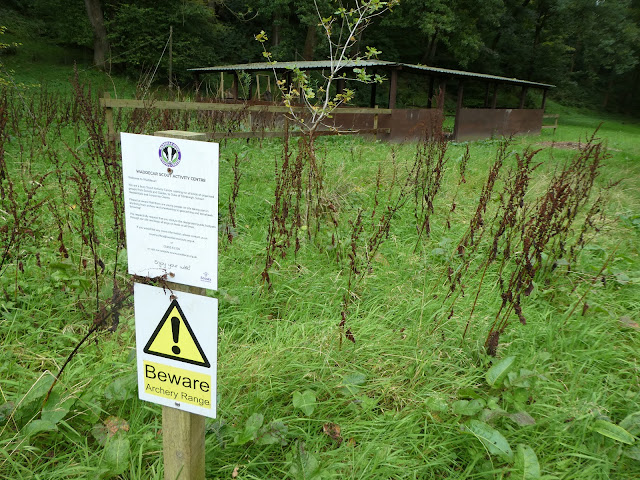 At the end of the scouting paraphernalia the path passes through an area named on the map as 'Boggy Wood'. It was certainly well named. 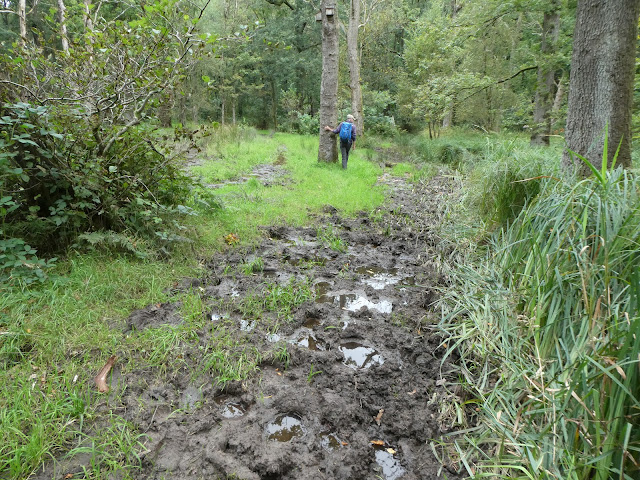 At one point an arrow pointed us to the left, through apparently deep bog. A narrow path led ahead beside the river. We followed that. After a while the path took a turn - across the river on submerged and intermittent stepping stones. Do we go back, enjoy a thigh deep wade, or take a diversion through forest? A track wasn't far away, so we took the 'jungle' option.
Paul was elated after a rather slithery ascent, the pictures of which are in my library... 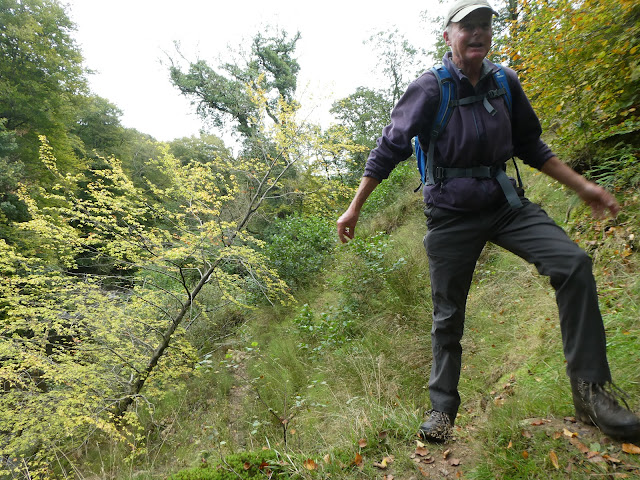 Later, an unmarked right turn ensured our pleasant riverside stroll all the way to Higher Brock Bridge. Dippers and a cormorant were in evidence here. Apart from this short section (during which we passed a strange residence with cars outside the house and a very well blocked entrance gate), on which the path could easily have been missed, today's footpaths were all well marked. 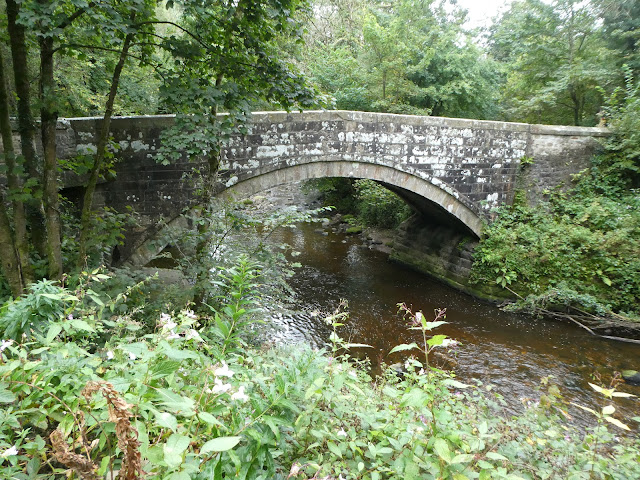 After this, we took pleasant paths past Lower Lickhurst and Middle Lickhurst, then zigzagging to avoid roads, and a final steep ascent back up to the closed visitor centre. 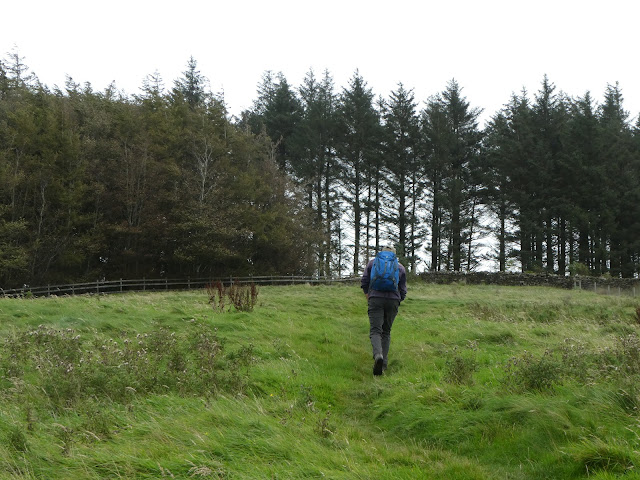 Here are two pictures of the route - the first at 1:50,000 scale, the second at 1:25,000. I couldn't decide which would be best. Click on these or on any other image, for a better version and access to a slideshow.
We took about 6 hours over the 21 km route, which included over 600 metres ascent. 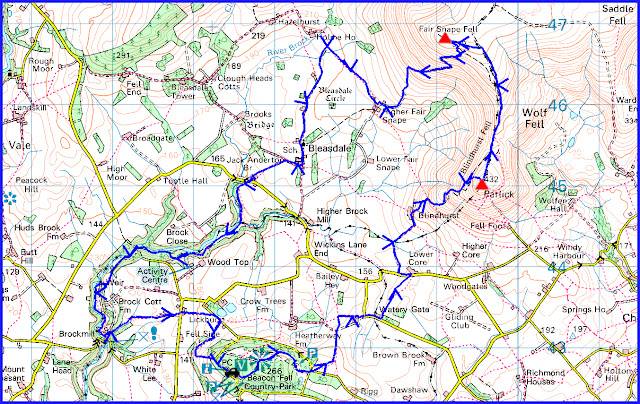 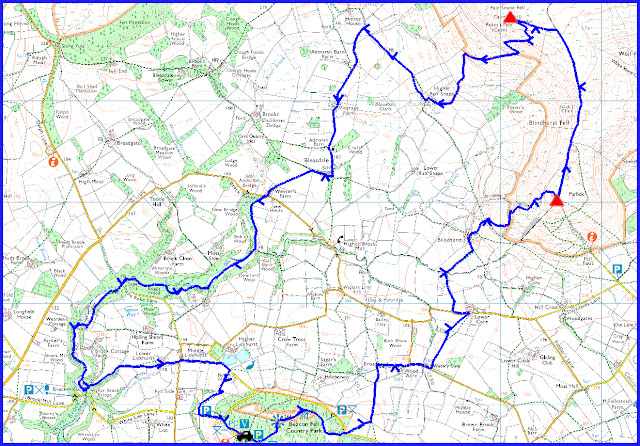 An excellent day out. Thanks for your company, Paul.
Posted by Phreerunner at 18:12

On your last post (The Wheel) I bet a virtual fiver that BC would have commented when I looked at Comments. Today I lost my next virtual fiver. A good account and interesting to read from a first-timer's perspective in this terrain well known to BC, and to a lesser extent myself.

Conrad lost his virtual bet because I've been busy today walking up Fairsnape on a slightly different route to you.
If I'd known you were in the area I would have happily joined you both.
That was ambitious, but commendable, doing the fells from Beacon Fell. We usually base in Chipping.
As to your queries in my next post is a photo of Nick's Chair which is very obvious.
We also noticed that patch of land that had presumably been sprayed with weedkiller.
Don't get me going on raptor persecution in the area, see some of my recent posts.

Thanks for those comments, BC. I should have researched this route rather than just plotting and following it. We would then no doubt have spotted Nick's Chair, visited the true summit of Fair Snape, and visited the Bleasdale Circle. And we did think... if they can do that to moles, what are they doing to other harmless creatures?

You can always plan a revisit.
A word of warning - they shoot everything around here.

Such a shame that these medieval practices continue to this day.
I'll be doing a shortish Nicky Nook walk soon. Let me know if you'd like to join me/us (m@topwalks.com).