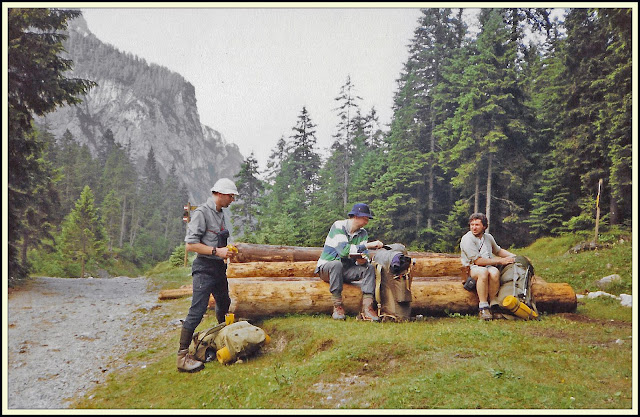 Extended soupy weight reducing breakfast followed by strenuous effort not to be last packed for once, nearly frustrated by forgetting my picnic tablecloth.
Well marked steeply descending path, not really deserving its dot status on the map. Salamander spotted by the path, rather camera shy; also big bright orange lilies further down. 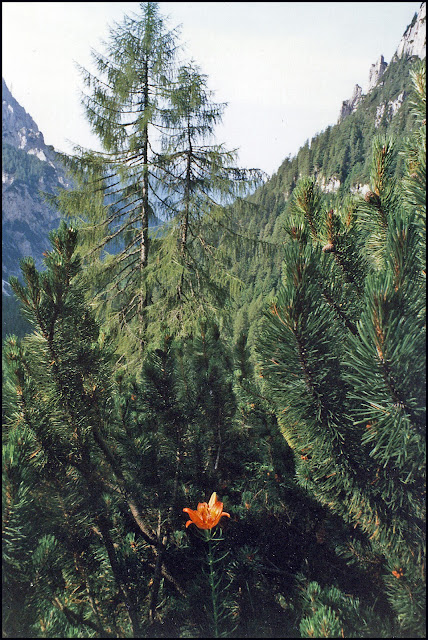 Martin W was lost in the vicinity of a signpost and was abandoned to his fate as the rest of us were going the wrong way anyway, descending a bit too far downstream in the Val Canali. The path rises in steep zigzags to Treviso Hut. I get talking to a party of five middle-aged Italians and discover that one of them knows my friend's father in Bassano.

No Martin at the Hut, even after apricot juice, cappuccino and fizzy orange. The others decide that it is my duty to wait for Martin W as they have to rush for their earlier plane, but I need to be persuaded with bribes. 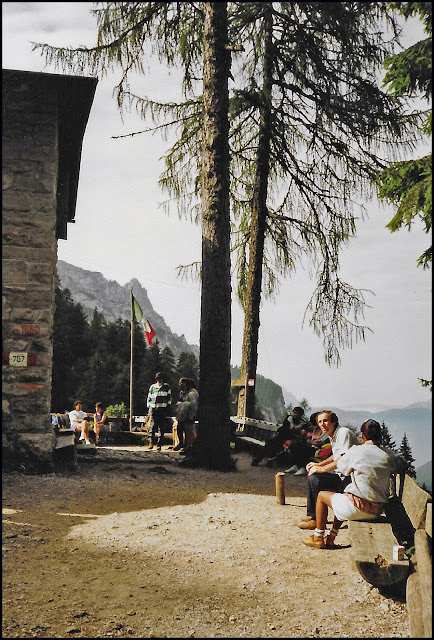 Martin W arrives, Dave, John and Martin B depart, and I settle into yet more rifugio food and drink. 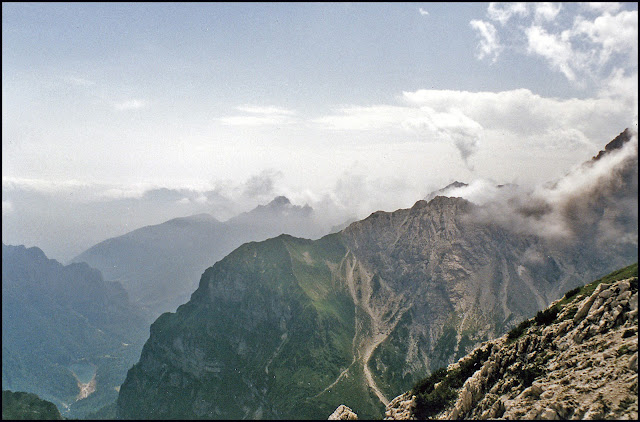 A view from near Rifugio Treviso 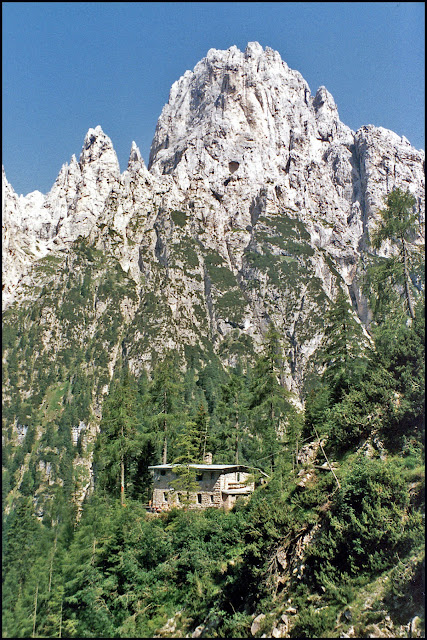 Looking back to Rifugio Treviso 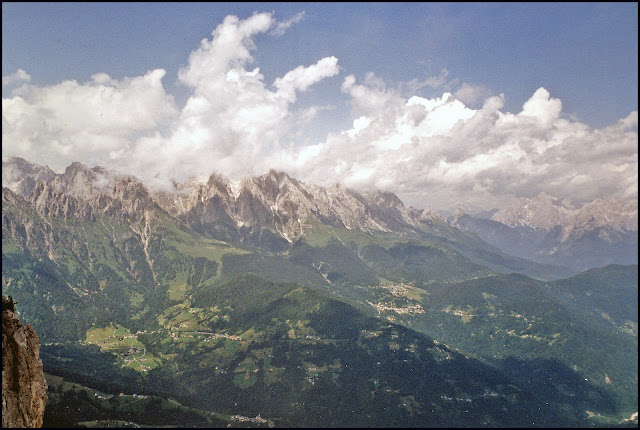 The path then contours along the wooded valley side for a mile before facing up to the Forcella d'Oltro. I plod up, promising Martin that I'll stop at the first water. But it's a dry valley. At the top the group of Italians tell me that Dave, John and Martin B brewed up here and left 15 minutes earlier. The gap increases to 50 minutes by the time Martin is up and ready for off again. 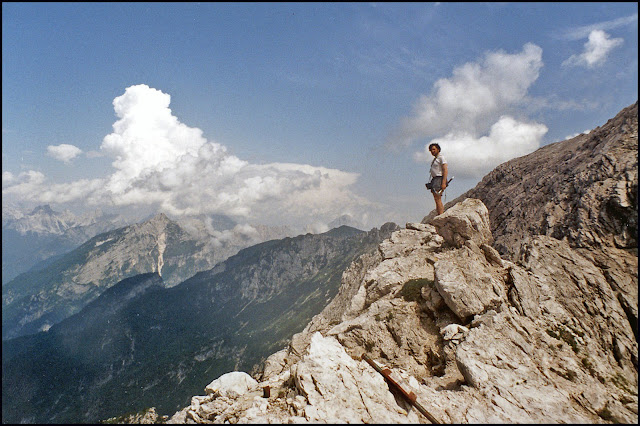 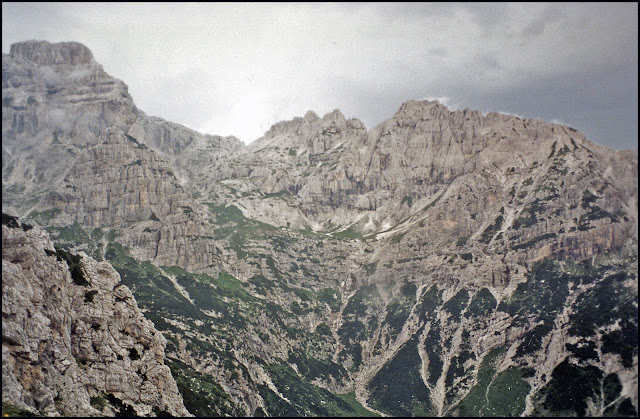 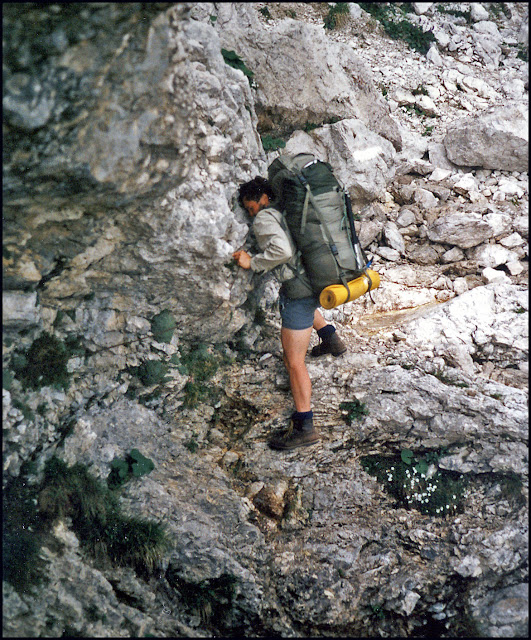 Martin W took these pictures before Laurie headed off on his own
The path now turns along the ridge for 2 miles, keeping high and exposed. By now I'm getting fed up with alternately chasing the three then waiting for the one. Martin says he'd rather take an extra day and do the next section on his own, so I don't bother stopping any more. Soon the path begins a gentle descent into an amazing area of fir trees and rock pinnacles. My slightly guilty feelings at leaving Martin increase as it starts to rain, and increase further as the rain becomes a thunderstorm, with lightning flashing around the firs and the rock needles.

The paths become impossibly slippery and I slither down off the path with an Italian couple. Lightning strikes uncomfortably close and I as I leave the woods, then the storm eases and I reach the Passo Cereda rifugio. A quick stop and then on down the road. The other rifugio, the Padreterno, looks closed. I talk to the woman there, she gets me some water and I go on down the lane to the hamlet of Mattiuzzi.

Some passers-by say there are three others five minutes ahead, but these turned out to be Italians going the other way, and they say Dave, Martin and John are an hour further on. I fill up with extra water at an Artesian well.

More thunder rolls and I'm worried about entering wild remote country in a storm and maybe missing the others. So I turn back, relieving my conscience into the bargain. And it pours, another thunderstorm. 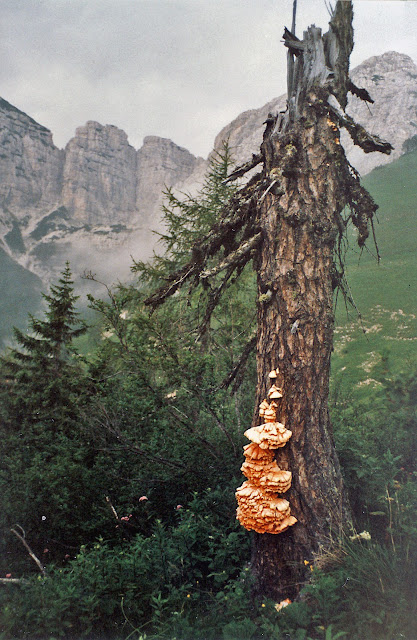 Martin W took this picture of impressive fungi at some point on his journey to Mattiuzzi
Two miles back, and at the Padreterno hut they say Martin has already passed: so how did I miss him? Then a man explains, in English, that Martin went to the 'House in the Trees', and gives clear directions. So back again into the storm, dodging the lightning, crossing the valley for a third time, and up to a house with a large conservatory type extension. And sure enough, when I open the door, there is Martin, plus about forty kids of all ages making the sort of racket you might expect.

I take off my sack and waterproofs, sit down by Martin, and share the pestering he is getting. Some kids are curious about the mountains - "do you climb" "do you use ropes?" - and some are curious about our nationality. Some read to us out of an old-fashioned English textbook. One child reads words from my dictionary with the same expansive gesture for each one. Since they generally follow the Italian rule of pronouncing each and every letter, almost nothing is recognisable, and we realise what a stupid language English is. They bring us coffee and tell us there are a couple of spare beds with the children if we wish to sleep inside. I wonder if sleep is likely. Another hour of half understood conversations, and they come up with dinner. Soup and cheese for Martin, with tomatoes and grated carrots, then coffee and grappa for the older kids and adults. They let us dry our boots under the stove, and this offer is quickly followed by directions to the outside wash basins. (The older ones who are classed as 'helpers' are more interesting to talk to and we eventually establish that the place is a children's holiday camp run by a church organisation, with a few permanent residents from families with problems.

Martin uses his head torch to wash by, which is a mistake as it proves a popular toy and he almost loses it. Eventually bedtime comes and the noise ceases surprisingly quickly, apart from fits of coughing which don't subside until I have quietly put a plastic bag over my smelly trainers.

Sunday (still) - Martin B, Dave and John's Day (Diarist: Martin B)
We start with a steep descent and then a sharp ascent to the Treviso Hut. My cappuccino arrived before the others. The ascent had featured the girl in yellow with the sore boob, and the girl in grey with no underwear.
We decided to part company with Laurie and Martin W due to Martin W's pace (half an hour behind us at ) and the dynamic trio's need to catch a plane on Wednesday. 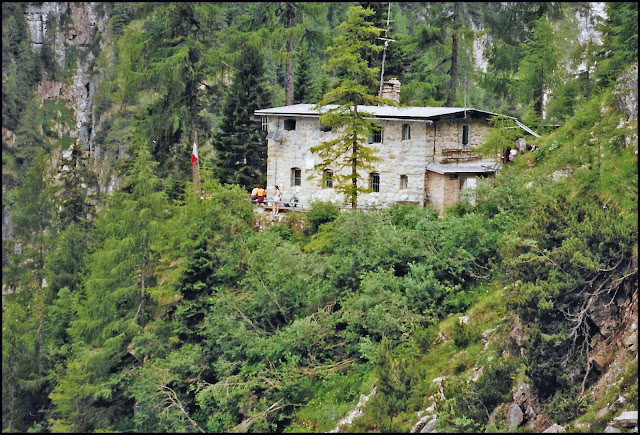 Our view back to Rifugio Treviso
On up to Forcella d'Oltro. Uneventful. 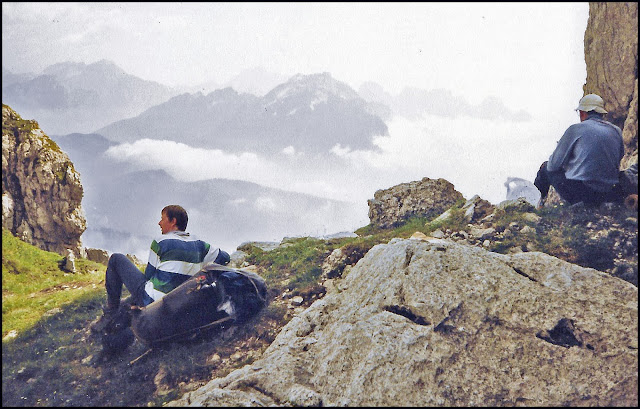 Forcella d'Oltro (above and below) 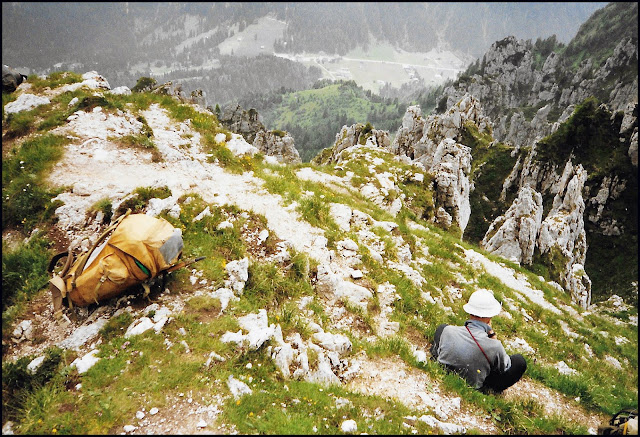 Before we leave we see Laurie half way up, forging on, but Martin W appears to be sunbathing below him. The contouring path which followed required great care. Lots of concentration needed. Steep drops.
Eventually we descended through rock towers, stones, grass, mud, Italians, etc. John kept falling over. 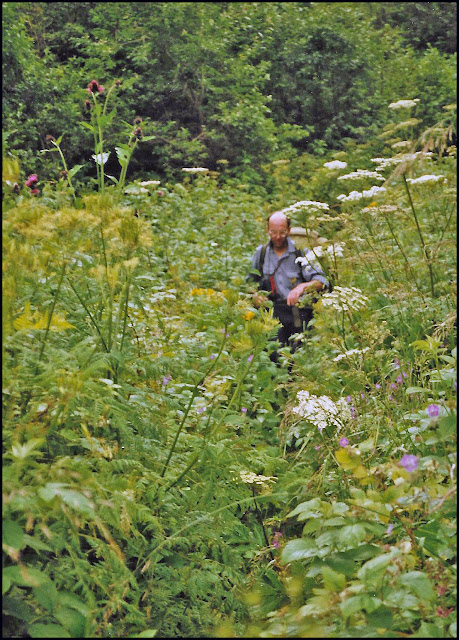 John forges on towards Passo Cereda and the start of the final stage of our walk
Rifugio Cereda brought ice creams and a thunderstorm. 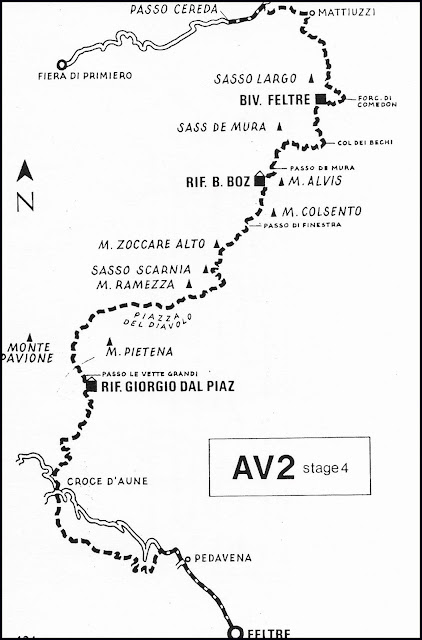 A stroll down to Rifugio Padreterno should have solved the problem (drinks) but it was shut. On then to Mattiuzzi for water, and then lunch where the ascending path finally leaves the road at 1200 metres. Conveniently sit out a storm whilst lunching (4:30 pm).

On up a pleasant path through woods and up a ravine. No sign of the fixed rope across landslip debris mentioned in the guidebook, but the path did go up a very bouldery river bed for a while. 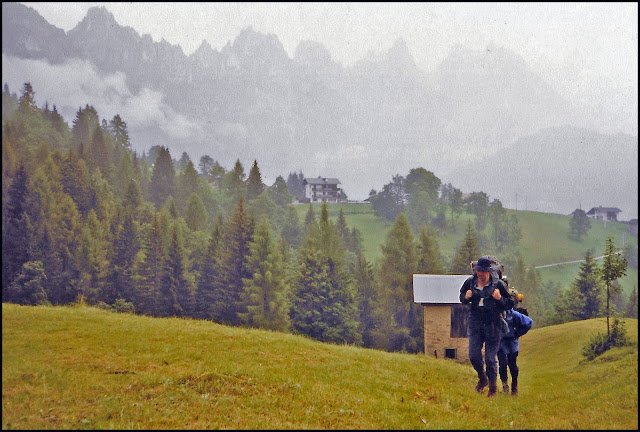 Eventually reached a highish point, only to find we needed to go a lot higher. Things now got tricky (6 pm). After 50 yards we were on an aided section when a thunderstorm got going. We sheltered under an overhang. John was very agitated. Sat on rucksacks as suggested in Laurie's book. 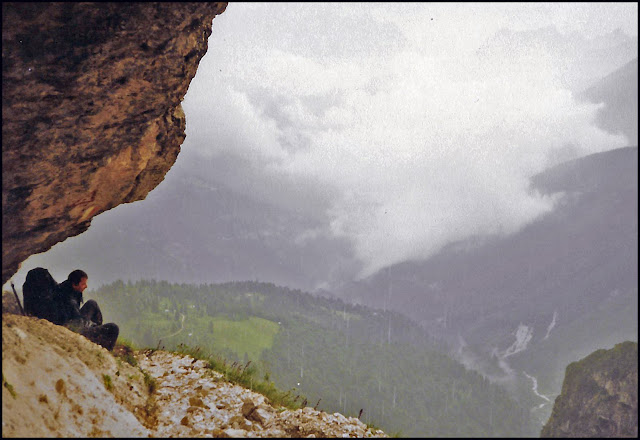 The storm passed and we continued on interminably. It was hard going all the way. Aided in places, not in others. Steep, nasty scree, steep frozen snow, but only I used my axe. Cloud below, as all day, and above.

Stupendous views, if atmospheric and not capturable on film. Giddying drops. It was a great relief to reach the Forcella di Comedon (2067 metres), after an 850 metre climb, at about 8 pm. It didn't take long to descend to the Bivacco Feltre (1930 metres) which we spurned in favour of a lovely meadow. My freeze dried supper was quickly cooked and this entry made by 10 pm by candlelight.

Decide on a 7:30 start again tomorrow. Just the route description makes me giddy. Lots of interesting flowers today, but no time to identify them. Nearly 13 hours on the hoof.
Here's our route - 20 km, with 2400 metres of ascent. 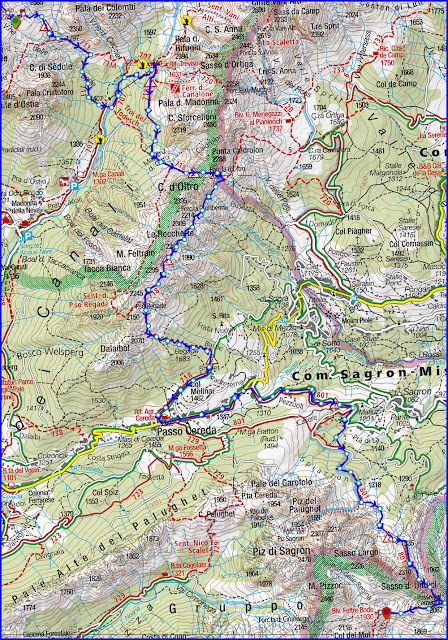 Click on the images for better versions.
Thanks go to Martin W for supplying the pictures taken during Laurie's tenure as diarist.
Posted by Phreerunner at 20:07