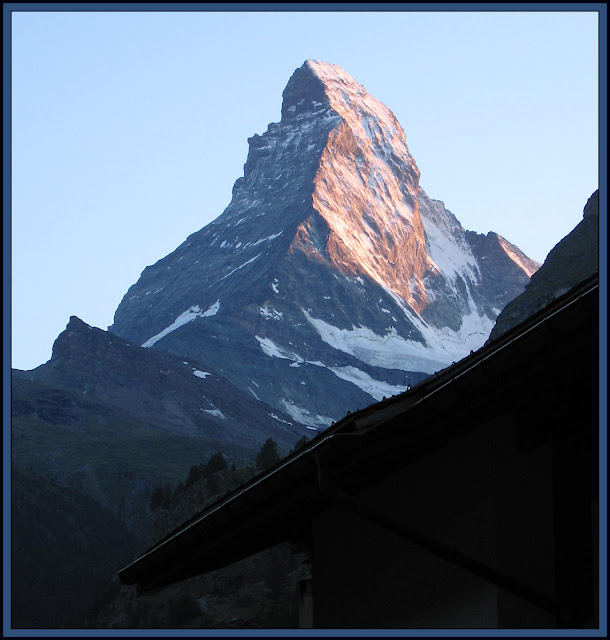 With Lockdown restricting activities more and more (I'm only really allowed out for exercise and shopping for essentials, and given the serious risks re transmission of virus I'm not inclined to stray far from home), I'm revisiting some trips from the early 2000's that just have jotted diary entries and downloaded photos.

I'm starting with the Walker's Haute Route between Chamonix and Zermatt, which on this occasion (I wonder whether my previous visits will ever be recorded here!?) was with a few friends whose point of connection is the Johannesburg Hiking Club, with whom I'm connected through Jacqui, a University contemporary and former flatmate.

Efficient trip above the clouds. as rainy as . 14:50 after losing an hour. Queues at passport control and a wait for baggage didn't stop me from finding a ticket machine (long queues at ticket office) and getting a ticket to by 15:25, for a train leaving at 15:30. I got on it - then it left - I could have been going anywhere but I knew all trains go to Geneva Central so I could change there if necessary. In the event it was the right train and by 17:55 I was in Visp, still in a t-shirt, after a wet journey past the lake and gradually improving weather after that. I don't fancy wearing shorts today though.

Distant mountains shrouded in cloud, with large snowfields high on the slopes. As we had passed through Martigny, happy memories of the Tour of Mont Blanc flooded back. It's a shame Sue can't join me on this trip due to having to go to work!

hick rain in (19:25) made my quest find my hotel - Tannenhof Garni - a wet one. Eventually I donned my fleece - waterproofs buried deep in rucksack - asked directions, and found it. I have a more than adequate small quiet room near the centre of town with a toilet next door and a shower nearby.

A five minute turn around saw me jogging back to the station to rendezvous with Dave Lonsdale (text messages had been flying around) and head to the north a little way to the apartment occupied by Dave, Sue, Dave, Betty, Rod (Dave's brother) and Doreen (Dave's mum, 83). From here we adjourned to the nearby Holiday Hotel for a good meal before I returned for an early night by 11:30 pm, 10:30 time.

An easy day before our backpack was in order, so the six of us (me, David, Sue, Dave, Betty and Gaynor) rendezvoused at '', the Emmetts' rented apartment, and left soon before 10 am in cloudy weather to get the underground funicular to Sunnegga - 1600 to 2288 metres in about five minutes. We were doing a variant of Route 5 on page 168 of Kev Reynolds' Chamonix to guide (2001 edition). Some of us donned waterproofs in the tunnel, as the camera at Sunnegga showed all to be very damp and miserable, and nobody else was going up. 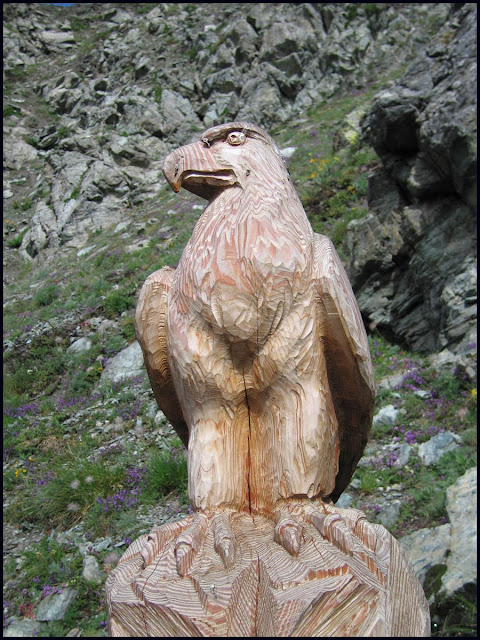 However, the waterproofs came off immediately and shorts and t-shirt were soon in order, though the breeze was cool at times. We disobeyed Kev and headed up (my error) rather than down, but the path was signposted to the Stellisee and it ran at a comfortable gradient close to the cable car above Sunnegga. 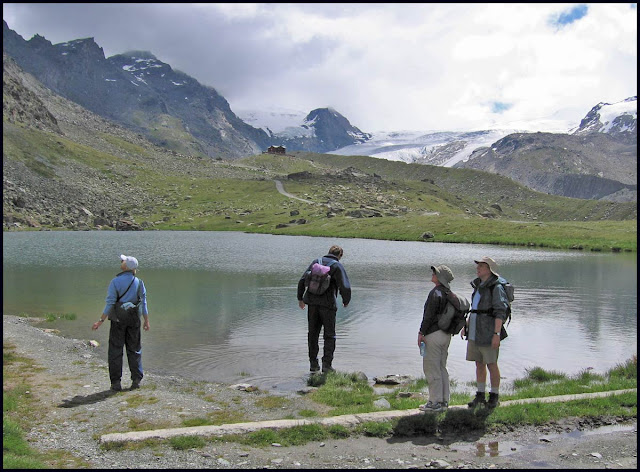 Eventually Stellisee was reached (above) - a nice spot with lots of sprats (tadpoles, I think), a few minutes walk from the Fluhalp Hut (2607 m) (above, in the distance) where it was draughty outside so we had hot chocolates, etc indoors. On leaving, we noticed many people lunching on the cool but sunny terrace. 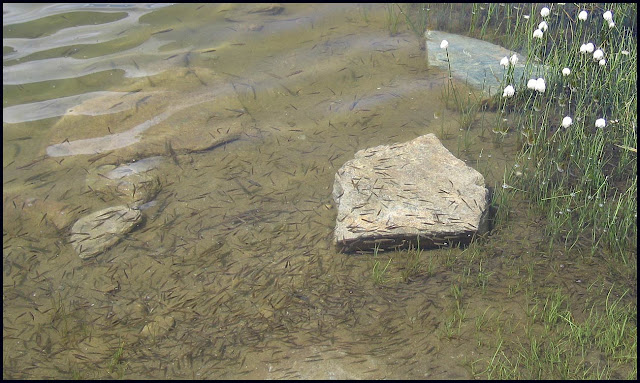 We headed down and on, scenically, to another small lake - Gruensee, with superb views towards the now virtually clear . 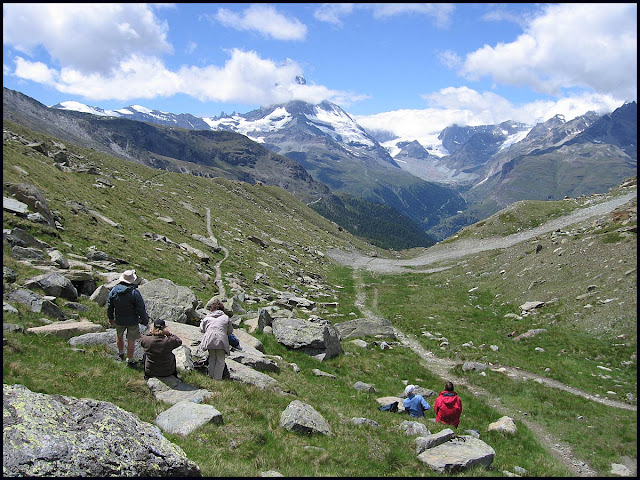 The Matterhorn from near Grindjisee 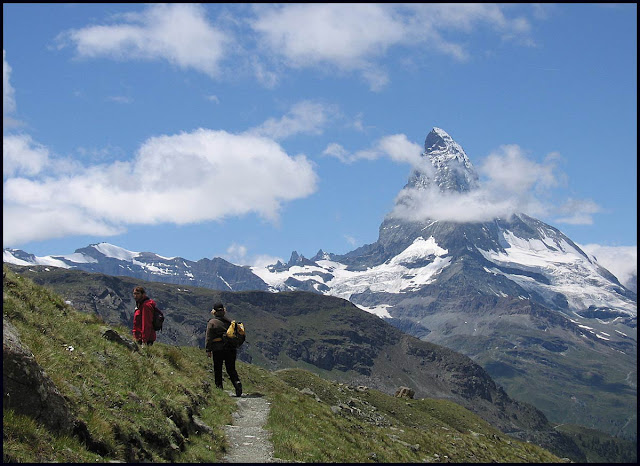 We then, four of us as Sue and David had headed down before Gruensee to do preparations for the backpack, strolled on past another mountain hut before descending the left bank of the Findelbach stream, very scenically. 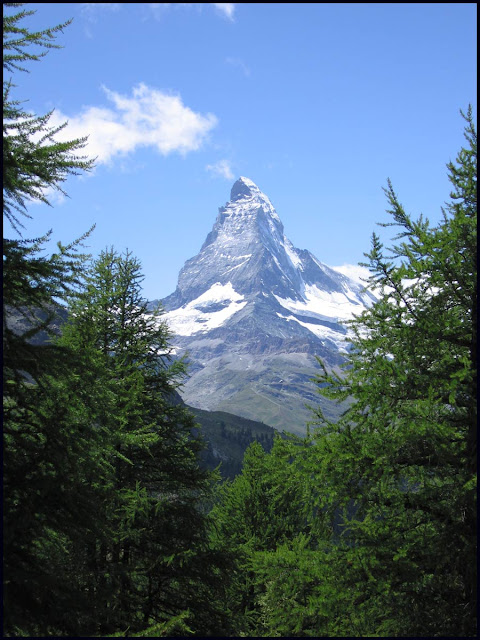 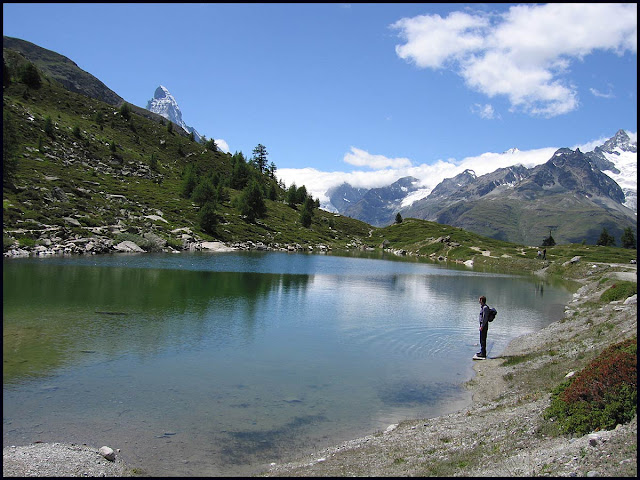 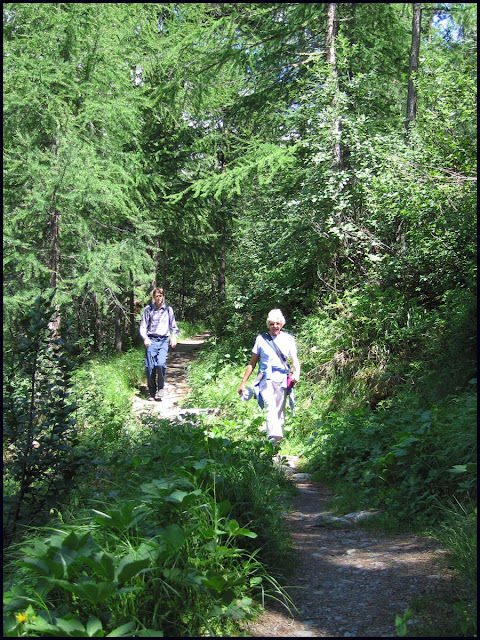 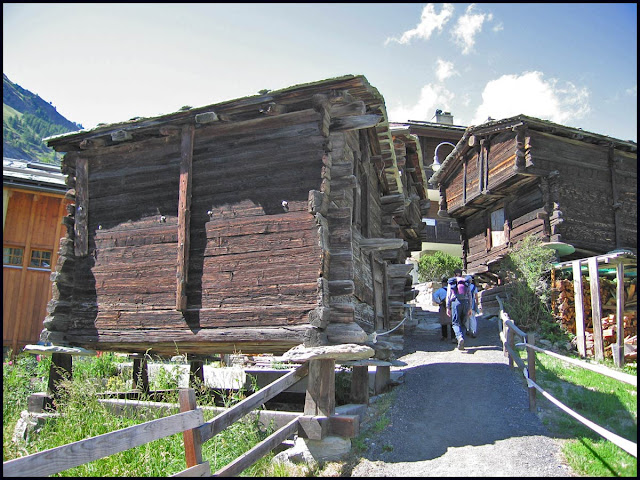 The path eventually crossed the cog railway and brought us into from the south, where Betty's scenic route took us past some religious grottos. 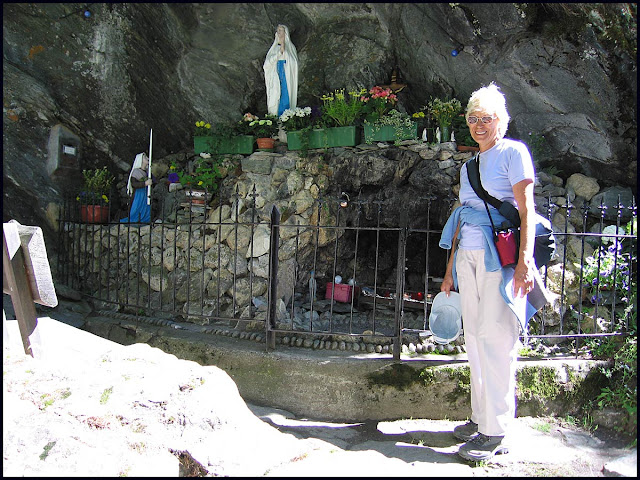 I wandered around Zermatt before rejoining the others at the apartment for a meal - a bit cheaper than last night's, before adjourning back to the Tannenhof. 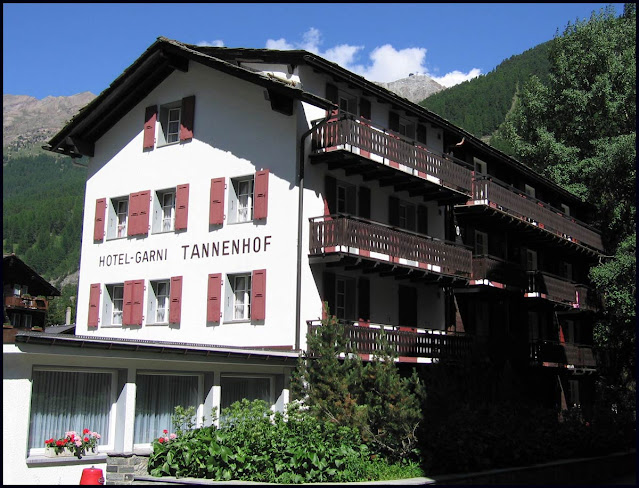 Next Day
Posted by Phreerunner at 15:53