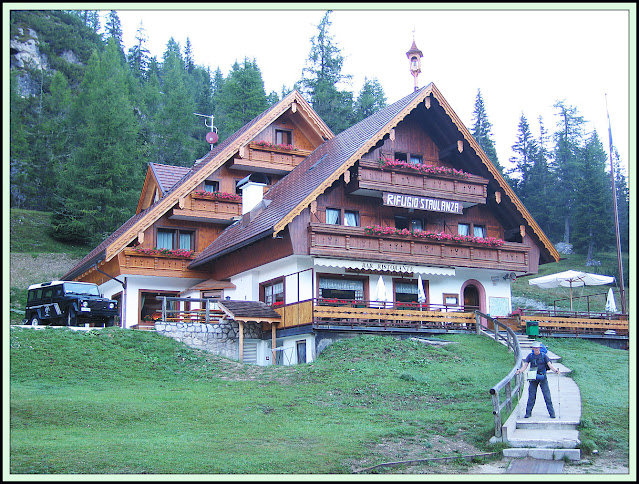 (Written with the assistance of Richard and Notchy) Relaxed start to the day. Good breakfast with very fresh croissants. Another hot day as we left the refuge (or rather the 'hotel') at 8:45, Memory Man almost abandoning his rucksack and walking poles.

Walked down along the road, crossing over the crash barrier briefly to avoid the rush hour traffic (of one car). Took path up the valley through ski pistes until we began to climb up. 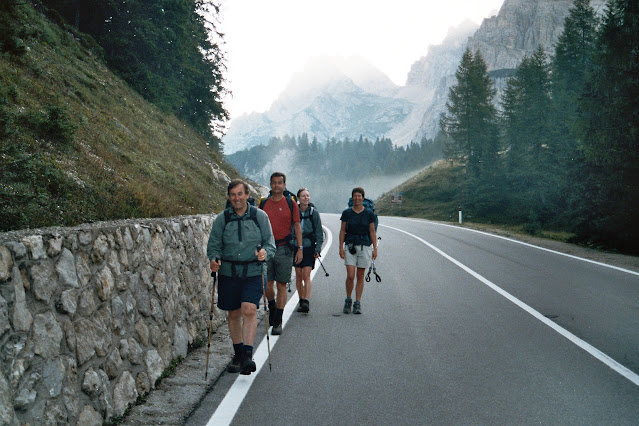 Steep ascent up, up, up, zigzagging across an open slope along to a broad gully. 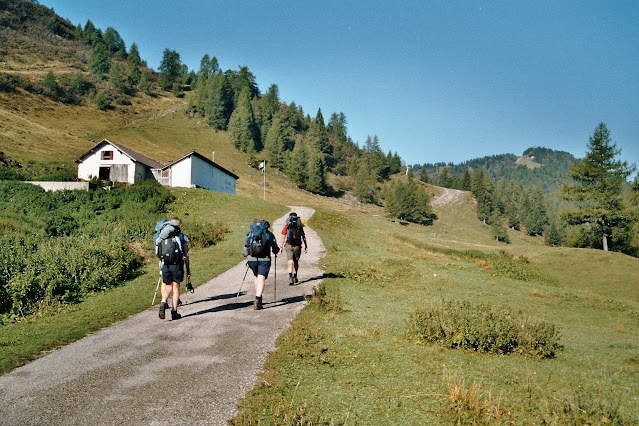 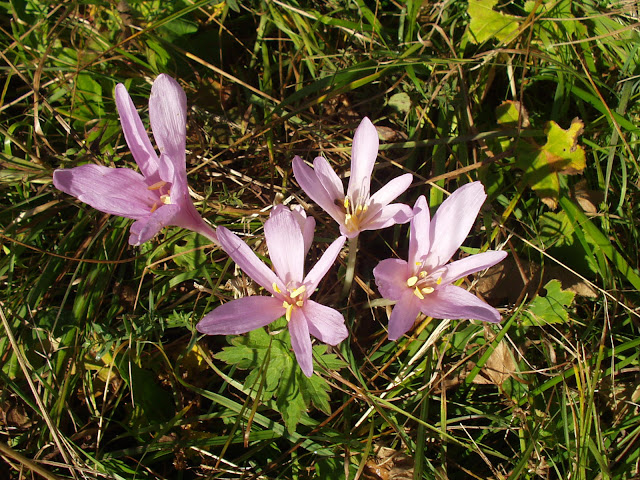 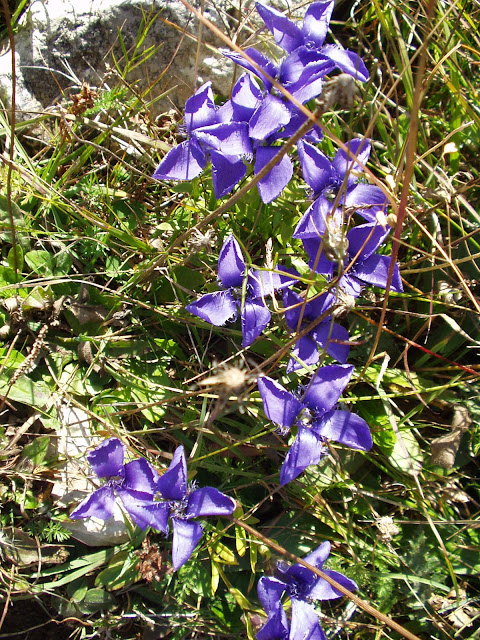 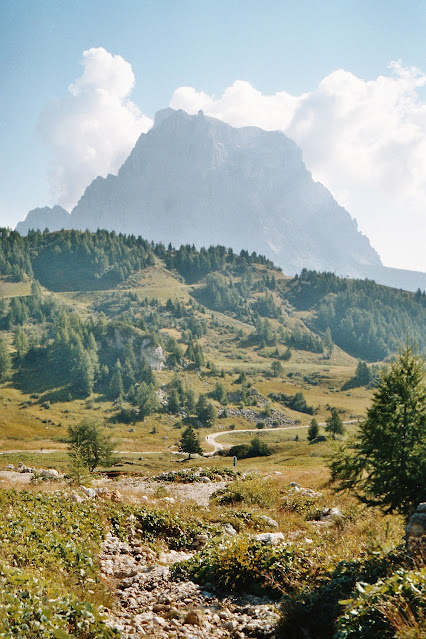 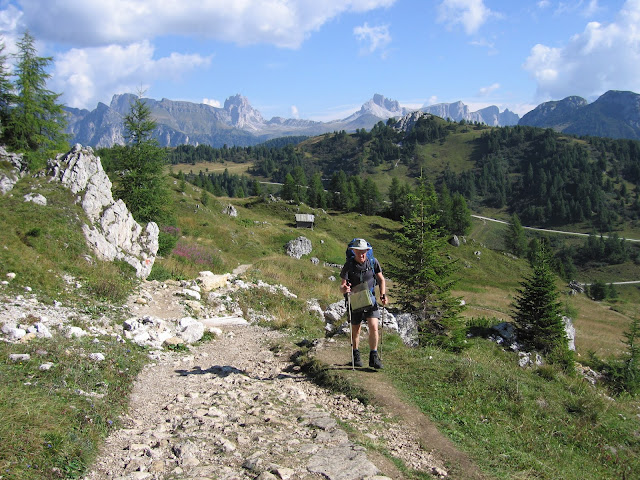 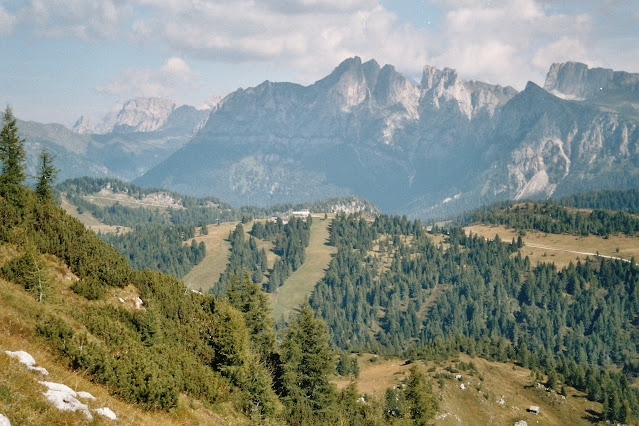 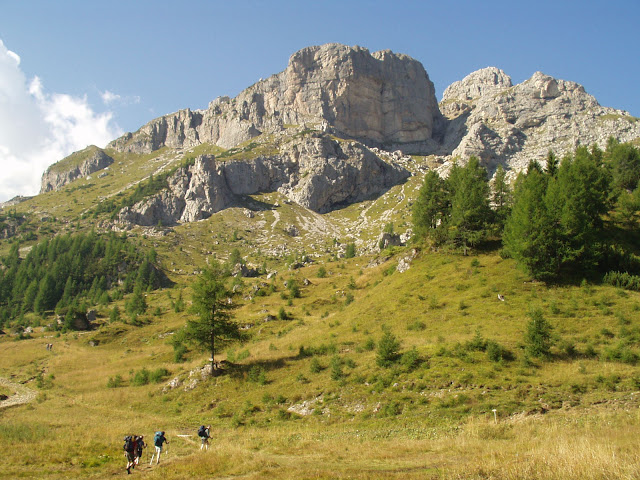 Saw view of Zoldo Alto village below, then more zigzagging up, up, up, up ... to Rifugio Coldai for what Jenny and Sue voted was the best hot chocolate of the week (you had to eat some of it with a spoon). 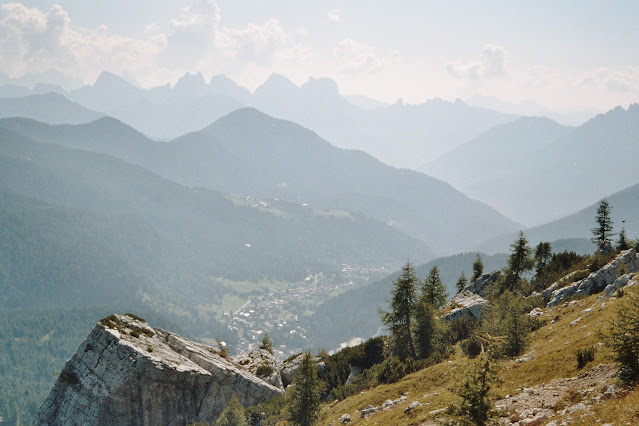 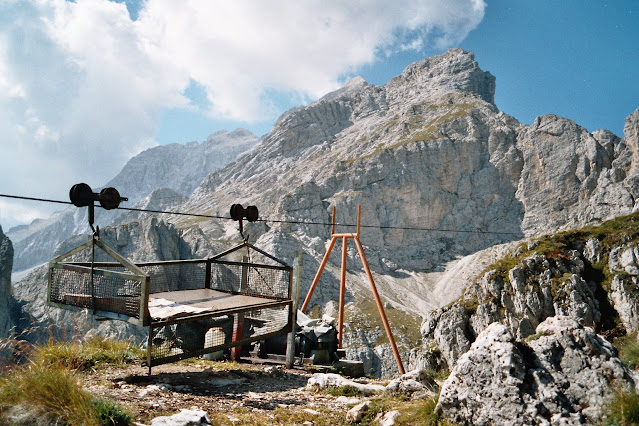 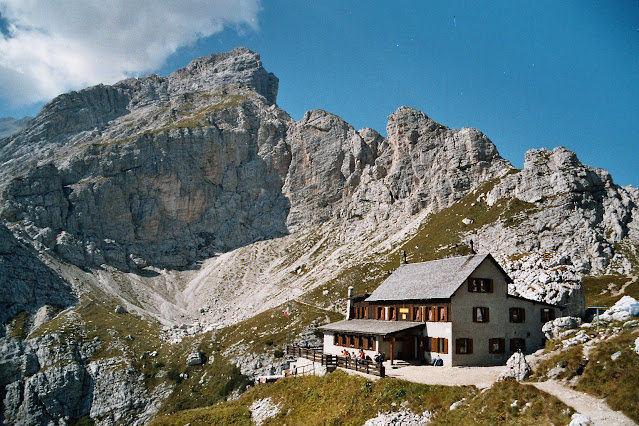 Brief passport worry (Sue thought it had been left at '' Staulanza and seemed strangely disappointed that she didn't have to skip back down for it). 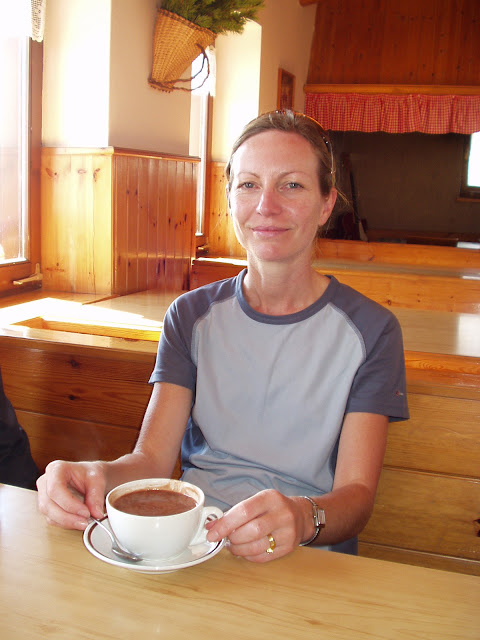 Left Rifugio Coldai, another short but steep ascent to a little col (Forcella Coldai) with a lake below. Romantic photos taken here - but sadly Notchy was not included due to lack of deodorant. 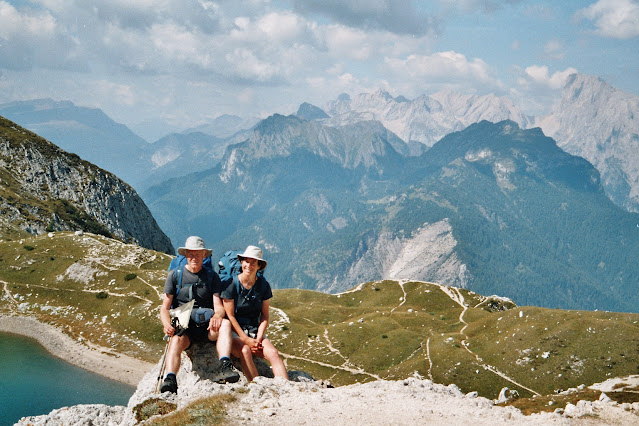 Walked down to the lake and then up to what we thought was the last ascent to the next hut. However, on reaching the col we realised the guidebook had mislead us, as the hut was on top of another up, up, up ascent. 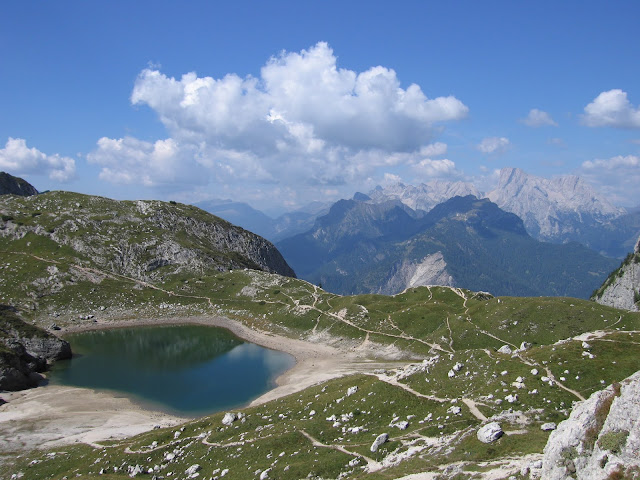 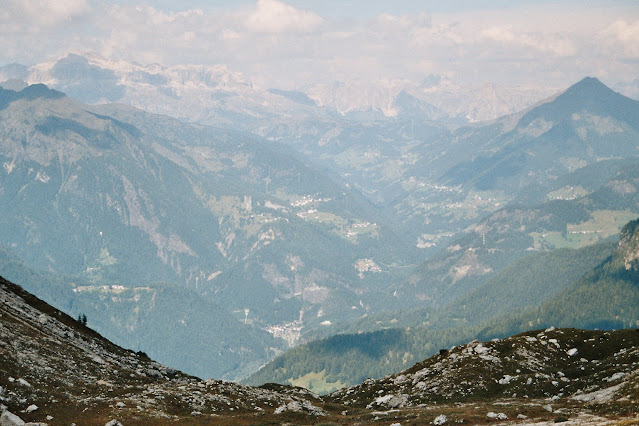 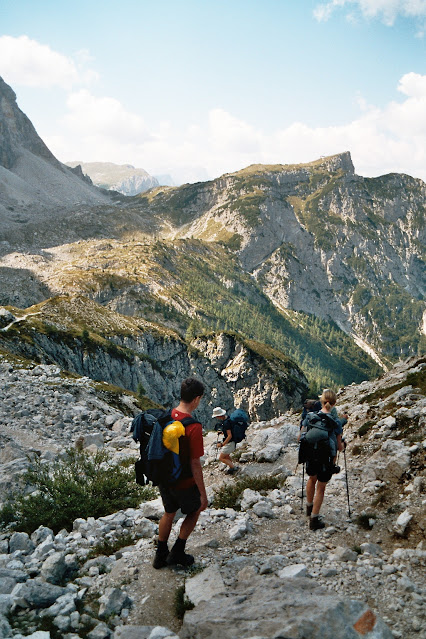 Plodded up, up, up to Rifugio Tissi - actually Richard made a speedy ascent due to lack of bush coverage and the need to eject about 3 lbs very quickly. The rest of us arrived with bowels intact and we all sat in the sun and enjoyed a lunch overlooking the Civetta group and listening to the tinkling of cow bells below. 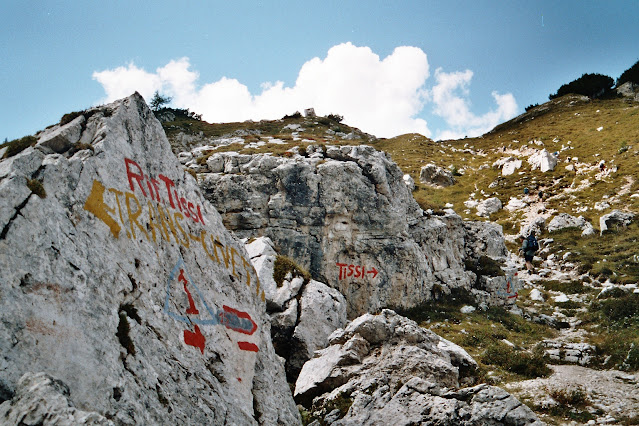 After lunch we walked up to the cross at the summit (Cima di Col Rean - 2281m). After the exhausting 10 metre ascent (we were heavily weighed down by beer from lunch) we sat looking over the lovely views down to Alleghe. Some of us fell asleep. 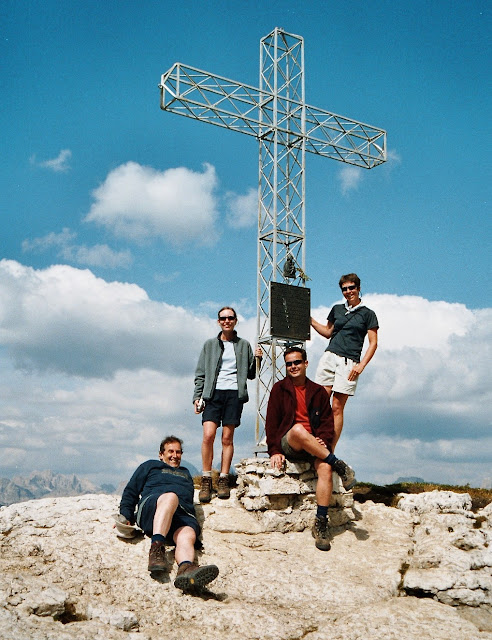 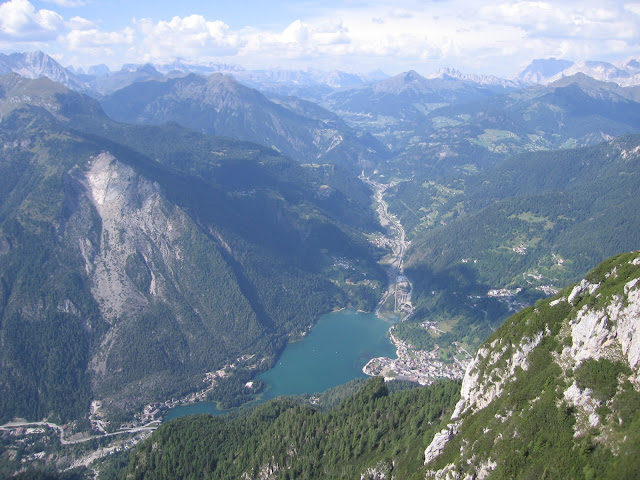 Retired to hut for washing, relaxing, and a stupendous effort by Martin and Sue to book our taxi from Alleghe to Lago di Braies (hurrah!). 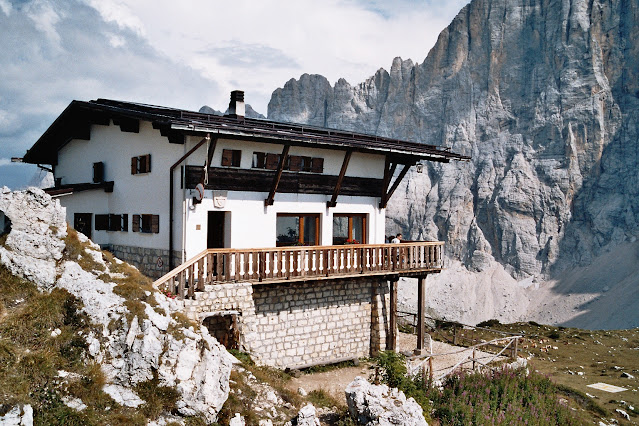 Met a few friends at the hut - the German group, the two Americans, and the snoring duo. No felt hat man (sadly for Sue). 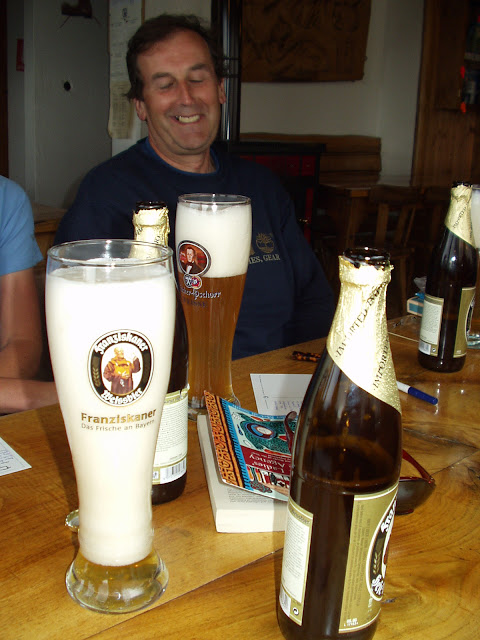 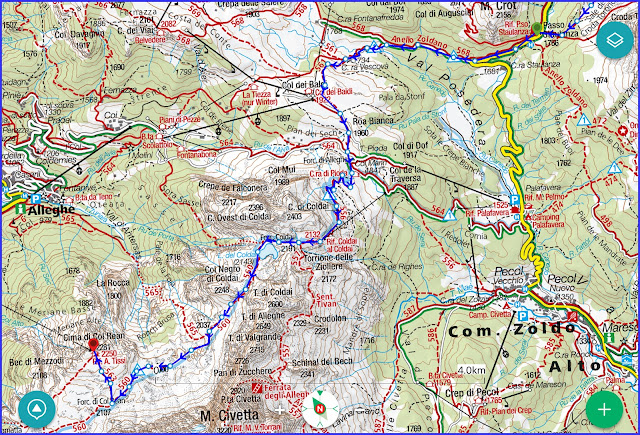 Next Day
Posted by Phreerunner at 12:08