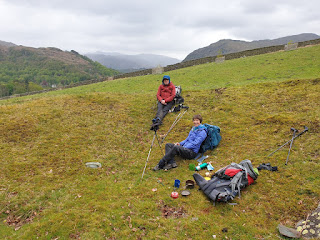 Link Cove to Ambleside
After the pleasures of last night the expected rain was due to start in the middle of the night. It didn't. However we couldn't ignore the fact that a mixture of snow and hail was gradually accumulating on the side of the tent.
We were brewing before 7am and ready to leave around 8am, after taking the tents down during a particularly violent flurry of hail. The prospect of unravelling the soggy bundles of tent later, when heavy rain was forecast, didn't appeal, though nobody raised the topic.
With inadequate summer gloves, and the temperature around freezing point, I found the ascent to the ridge between Hart Crag and Dove Crag rather uncomfortable. Cold hands persisted all morning for all three of us as we descended, much of the time in cloud, the long ridge down to Ambleside.
Three lads, one in shorts, passed us. They were doing a Fairfield round before heading to Manchester to support City in their final home game of the season. They had got up at 4.30! Several other people surprised us simply by being on the hill on such a miserable day.
Then Sue reported a medical condition. My emergency supplies of out of date antibiotics were raided and provided temporary relief. And the rain went into a brief 'pause' setting, enabling us to warm our hands and enjoy an alfresco lunch above Ambleside, with a backdrop of more rain sweeping in over the Langdale Pikes (pictured).
All this almost tempted us to continue along our planned four day route. But thankfully common sense prevailed and we strolled into rain drenched Ambleside and caught the first bus to Bowness.
Luckily, we are now allowed indoors in cafés, so our hour and a half wait for a bus back to Patterdale was spent comfortably indoors. The time flew past. Then we enjoyed the bus ride over Kirkstone Pass - seemingly quite challenging for the driver, but he must be used to it.
Coffee at Mike's then a drive home with the wipers on the 'Fast' setting confirmed the wisdom of our decision to call it a day, as a fresh band of rain swept over the Lake District, with more forecast over the next couple of days.
Gear testing was effective, and Mike will now make a few adjustments in preparation for next month's TGO Challenge event.
We now have two days worth of made up backpacking supplies, so will try to get out again when winter finally calls it a day. I may take thicker gloves.
I'll post more pictures etc soon - one useful bit of kit was my waterproof camera!
Posted by Phreerunner at 21:45