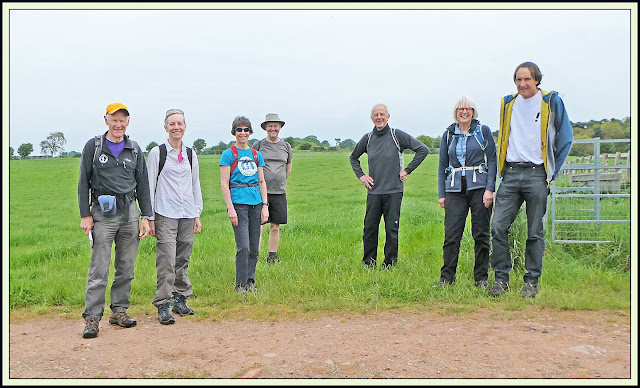 This was another recce for Jen Darling, should she get around to issuing a new edition of 'Walks in West Cheshire and Wirral'. It's basically a shortened version of her 14 km route described in 'More Pub Walks in Cheshire and Wirral', which we walked on 5 April 2019 - report here. Neither of my companions on that occasion were present today.

Seven of us - me, Sue, Jenny, Graeme, Philip, Keith and Carol - assembled efficiently at a lay-by on Stoney Lane, Delamere (SJ 553 683), on an overcast but comfortably warm morning.

After a brief period of unpleasantness on the pavement of the A54 main road, we found ourselves making our way through damp grass at the side of a field to a wooden post that neatly housed my camera for the self-timed group picture shown above.

We then ascended a path at the edge of Primrosehill Wood, into which we could see other pathways leading to the interior of the wood, with magnificent beech trees in this detached segment of Delamere Forest. 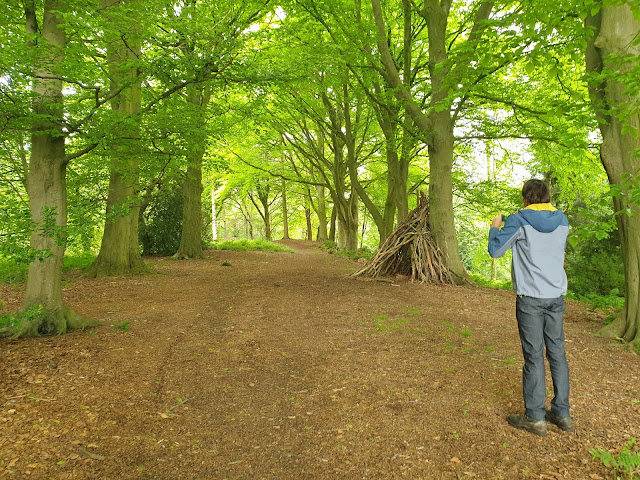 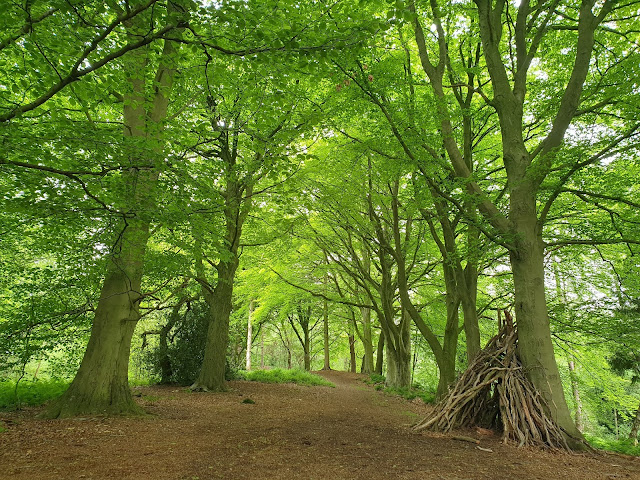 From the edge of the wood at its high point, Philip assured us that on a clear day we would be able to discern the distinct outline of Shutlingsloe. Today it was a little hazy for that, and some imagination was needed in order to pick out the outline of the Peak District in the distance. 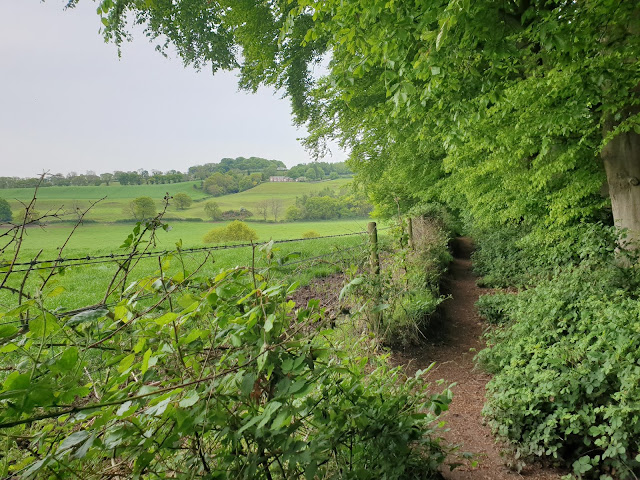 After joining Tirley Lane, and passing Tirley Farm, our path took us pleasantly around the Tirley Garth estate. The large country house seemed to be shielded from public view. Built in 1907, the building has an interesting history, and was bought by Mersey Television (founded by Phil Redmond) in 2002. That is now known as Lime Pictures, so perhaps the internal cloisters of the building provide the set for many a Lime Pictures production?
A quiet lane, John Street, led into the pretty village of Utkinton where we turned right down a snicket and passed an unusual wall structure, despite a 'footpath closed' sign. We soon discovered the reason for the sign - about five metres of pathway have disappeared, leaving a 3 metre chasm with vertical sides. 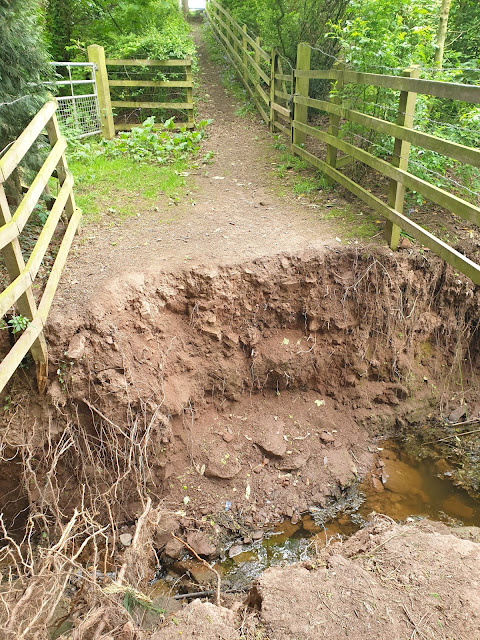 We adjourned for elevenses and some of Sue's chocolate caramel shortbread. 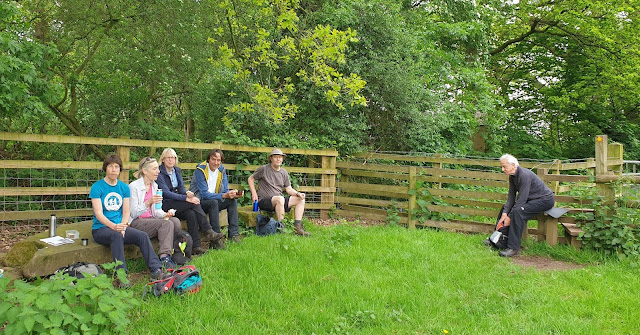 The path may have completely disappeared, but five of us found a way round, whilst Graeme and Philip were sensible - their longer route to a rendezvous point got them there rather more speedily than our adventures in the gully. 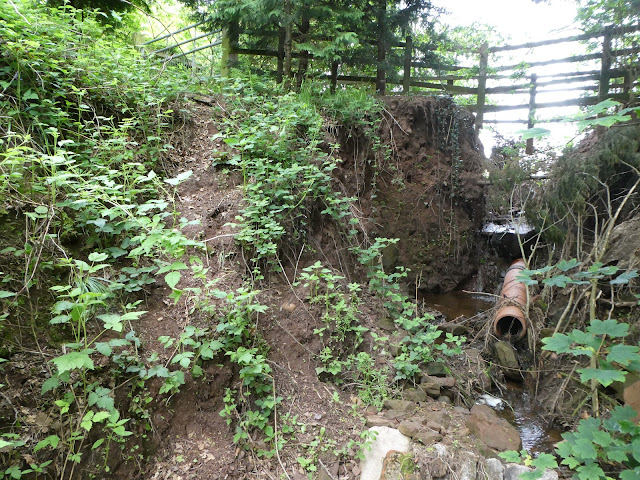 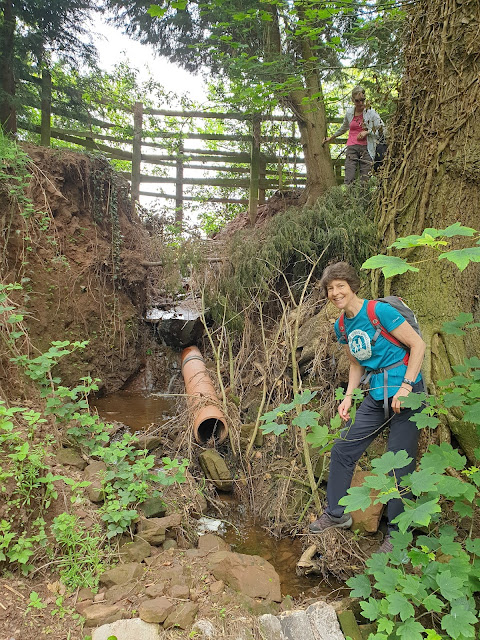 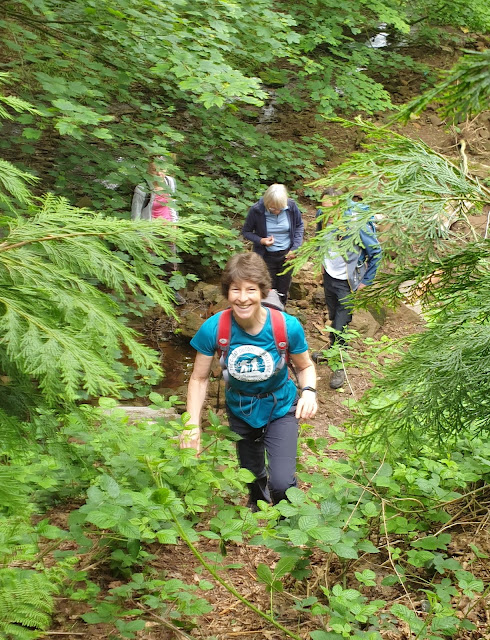 Once 'out of the woods' we could enjoy views across the Cheshire farmland to Beeston Castle. (Click on any of these images for a better version/slideshow.) 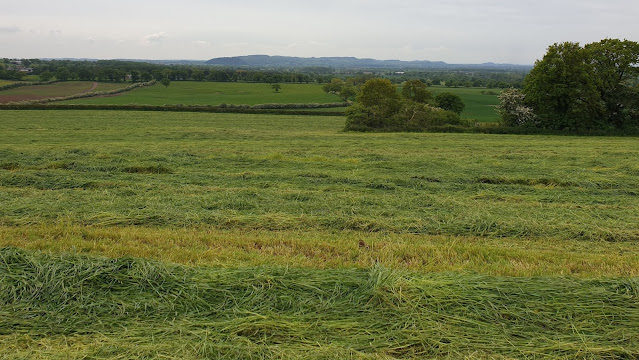 The Sandstone Trail path was now joined, and a good footpath led around the side of a field. 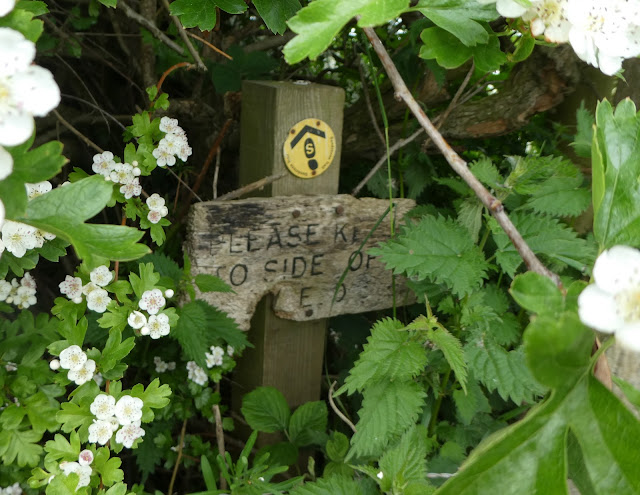 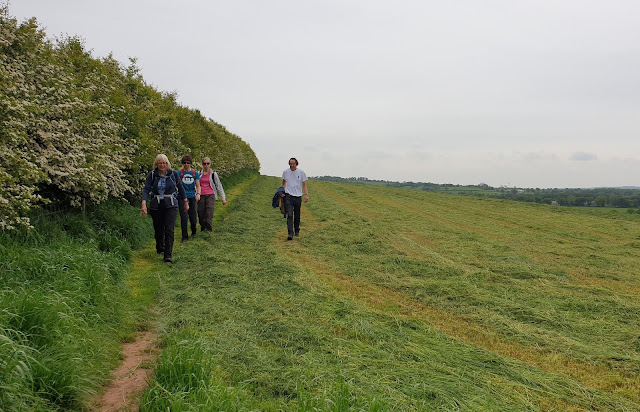 Note, below, the yellow latch on a kissing gate. Under the initiative of Michael Gove, supervised by Dominic Cummings, the Tory government would appear to have required each Local Authority to appoint a 'latchperson' to paint all gate and stile latches yellow so that their voters, now released into the UK countryside instead of being allowed to stumble around the crowded beaches of Spain, can find their way from yellow latch to yellow latch across the countryside of their homeland where they've never previously set foot ... 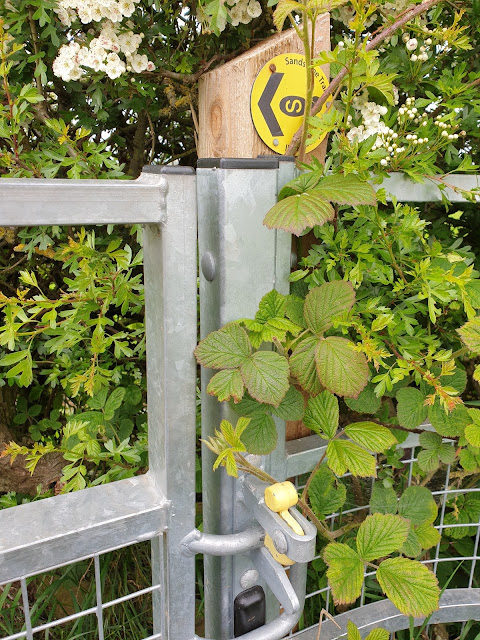 Jen's book eulogises Summer Trees Tea Room. Sadly, this former haven for walkers was sold some time ago and is now a private house. 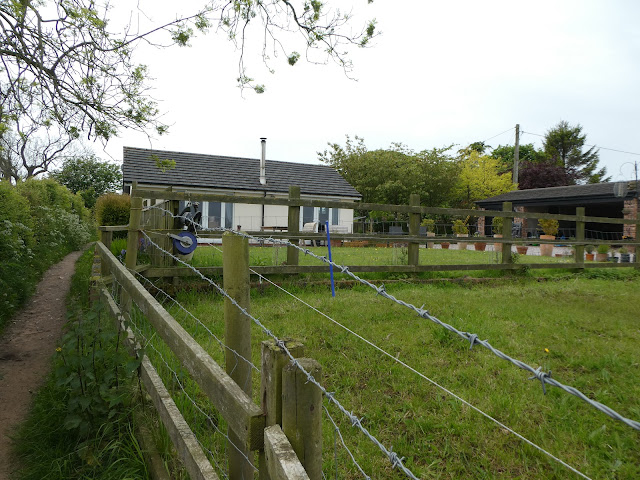 Soon after this, we veered right, off the Sandstone Trail, heading past a meadow filled with buttercups and Ribwort Plantain, before returning to the delights of Primrosehill Wood. 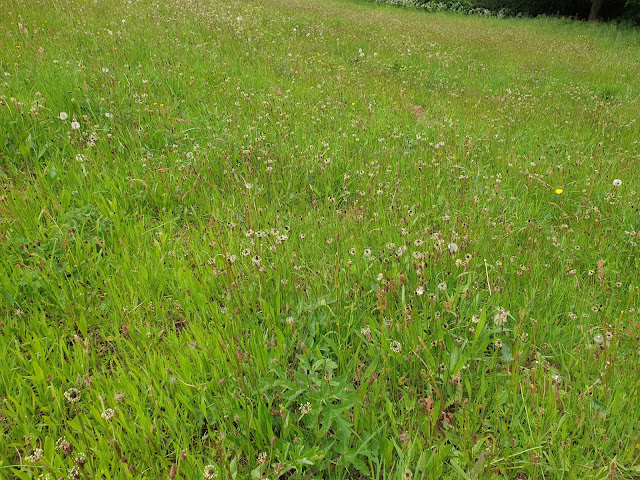 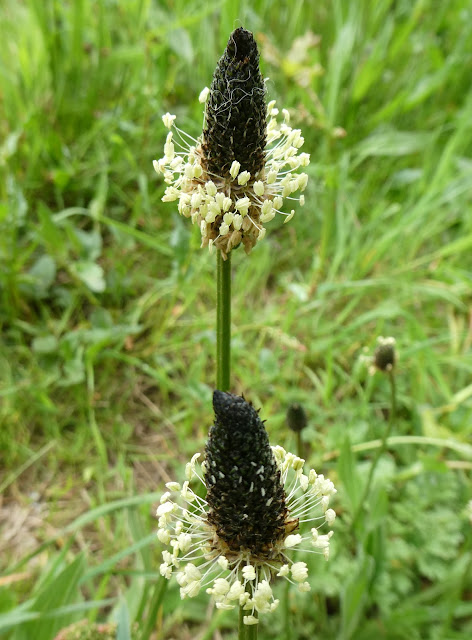 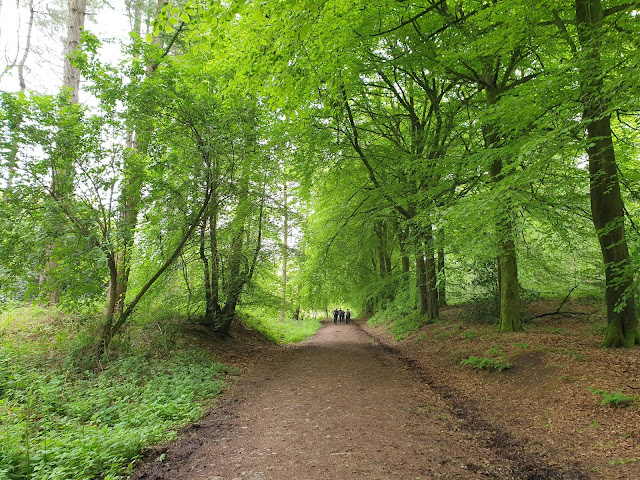 Beyond the wood, gallops and horsey infrastructure - believed to be part of the Michael Footballer Owen Empire - on an industrial scale lay before us, but luckily the yellow latches (not to mention the footpath signs) led us with the aid of our resident cow-whisperer (Sue), through a field of cows and back to Stoney Lane. 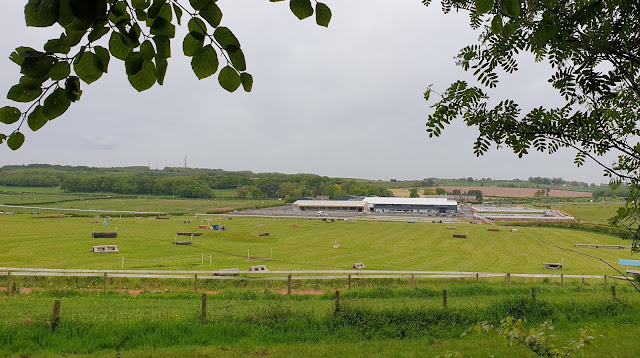 Here's our route - 9.5 km with 200 metres ascent, taking rather less than three hours. 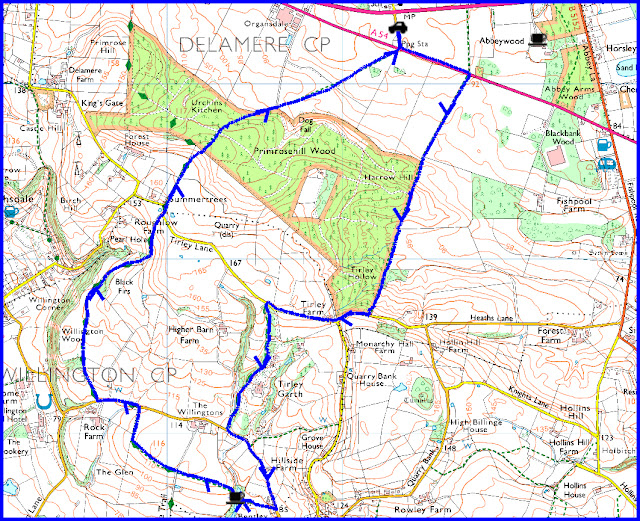 Graeme and Phil returned home. The rest of us drove a very short distance to Abbeywood Gardens for lunch after this sociable outing in lovely countryside.
Our next Friday walk will be as follows; all are welcome under the current rules:

I wonder if yellow latches discriminate against people who are colour-blind? Oh! and perhaps against Chinese? I think this is so important I have decided to devote a post on my own blog to the subject.

We wait with bated breath!

Yes Maureen, your brother is a very sensible person, but perhaps lacking in a sense of adventure when one of his companions faltered at the start line. Phil was definitely not prepared for this adventure, so Graeme kept him company on the alternative route whilst the rest of us clambered in and out of the chasm.