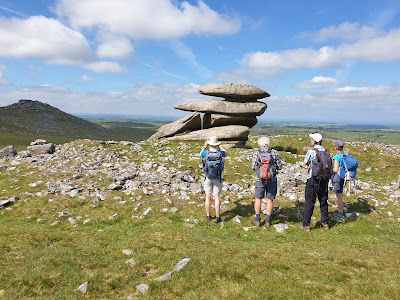 On another fine, sunny day, a fair number of us set off up Showery Tor from the car park at Poldue Downs.
We crossed the Grade-II-listed Roughtor Bridge - a fine example of a double-span clapper bridge made of granite - then headed up easy slopes to reach our first summit (see above).
After a long break and much admiration of the granite stacks and Neolithic stone walls at Showery Tor, just four of us went onwards to Brown Willy.
The name 'Brown Willy' is a corruption of the Cornish 'Bronn Wennili', which means "hill of swallows". I'm pictured on the summit with Sue, Gaynor and Gill, thanks to a chap straight out of an extreme sports magazine. He was a 5th Dan who enjoyed 24 hour obstacle races - the winner being the one who could do the most 5 mile laps in the 24 hours.
A swallow flew past, harvesting rich picking from the many insects that were congregating at the summit. 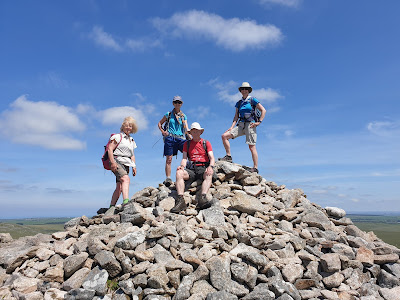 We strolled along the ridge to the furthest cairn, then returned all the way back to a small bridge over the stream that divides Brown Willy from Rough Tor.
After another gorgeous lunch break in the sun, we headed up to the Rough Tor ridge, passing this little chap who was pretending to look like a pile of sheep poo. 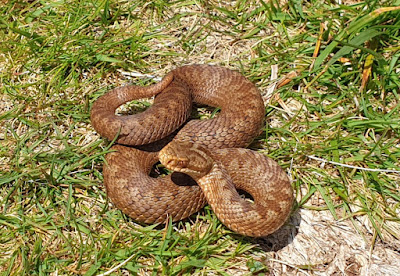 Once on the summit of Rough Tor ("row-tor"), Sue clambered up some rocks and nearly got marooned on the top when she couldn't find the way back down. 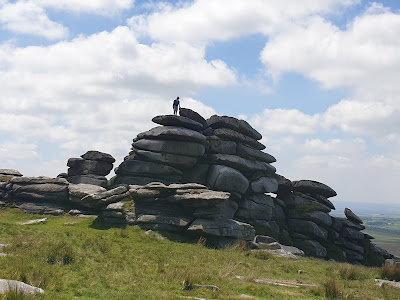 We soon found a war memorial that is situated in the foundations of a medieval chapel built into the side of one of the larger cairns. 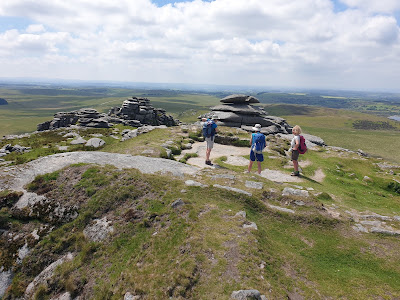 A gentle path down saw us reach the car park soon after 2pm, after our four hour jaunt. We had covered a little over 8km, with around 350 metres ascent. 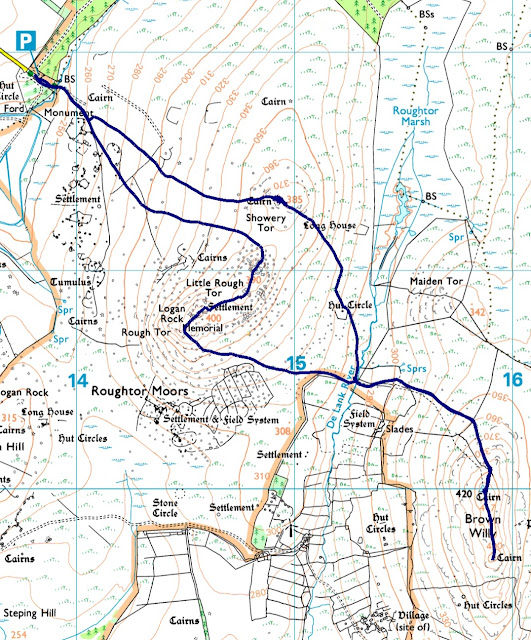 After returning home in the early afternoon,  Sue and I strolled down to a local church of great character, St Julitta's at Lanteglos. 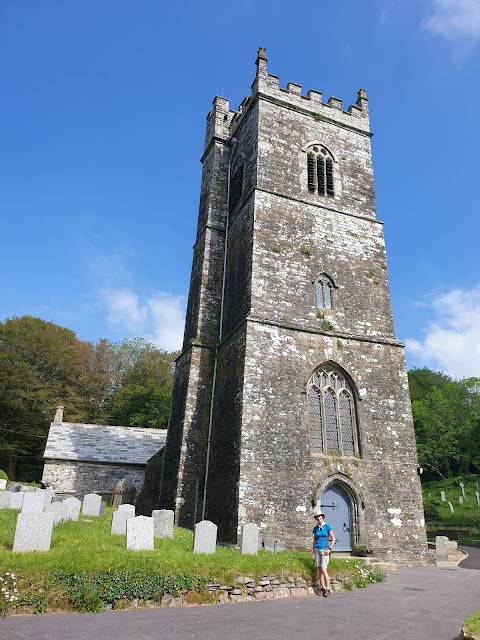 A long chat with the lady church warden solved many of the world's problems!
If only it was that easy ... 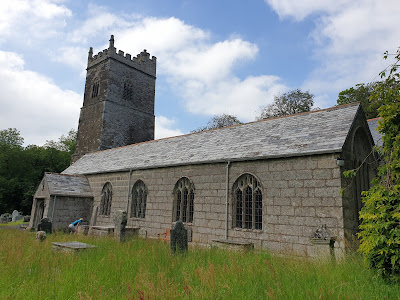 Then we assembled a box of goodies and took them to the Old Ambulance Station (now converted) to share with Andrew, Dave and Betty. 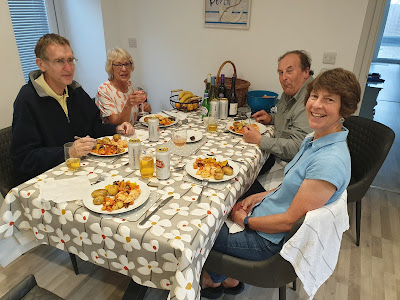 A very enjoyable evening - with thanks to our hosts, whose facilities are more suitable than ours for a small gathering such as this one.
Posted by Phreerunner at 22:03

A good and varied walk. I was there in April 2013 ticking off Marilyns. I sat in the carpark on the Saturday for an hour looking out at torrential rain and then went back to the caravan. Brown Willy was conquered on the Sunday. There is a "monument" marked on the OS map close to your car park. From my blog post:

"There is a monument situated just downstream from the car park to Charlotte Dymmond who was murdered by Matthew Weekes in 1844. If you are interested there is more detail if you Google Matthew Weekes."

I seem to remember it is worth a read.

I knew about that monument, but we missed it. Perhaps I'll find out more when I do an overview of the trip.
As you can see, we enjoyed perfect weather.