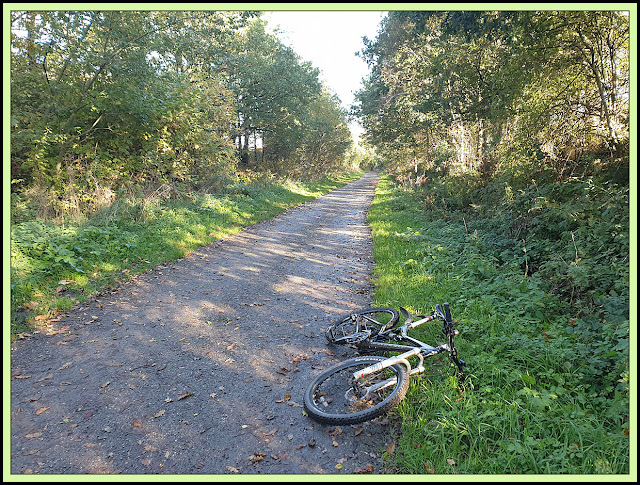 I chose a lovely day for this leisurely 30km bike ride from the western end of the Middlewood Way at Rose Hill in Marple.

Autumn colours do not yet dominate the scene, though they are on the way, and the dappled light from the low sun as it pierced the trees was lovely as I warmed up by way of 7km along the old railway track.

A short road section then took me into Lyme Park, and a steady climb through more woodland. 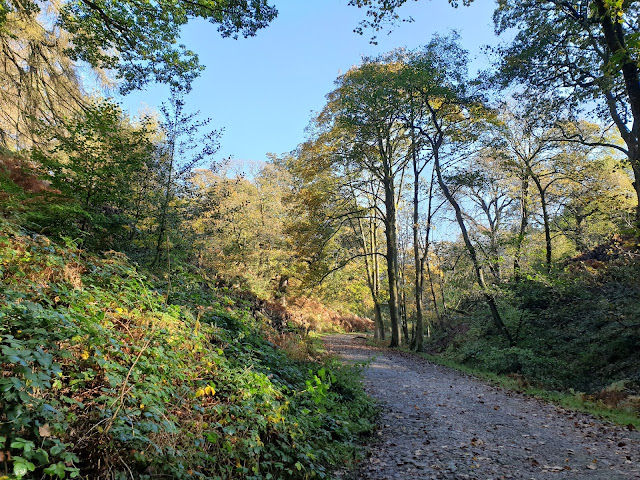 I'd been going for an hour by the time I reached the pond near Lyme Hall. Time for elevenses. 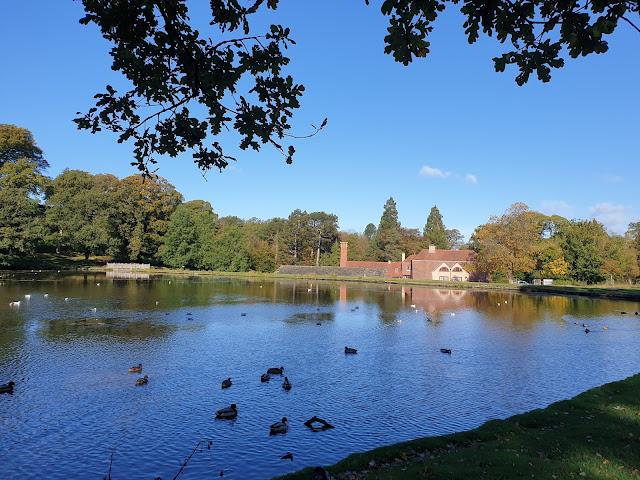 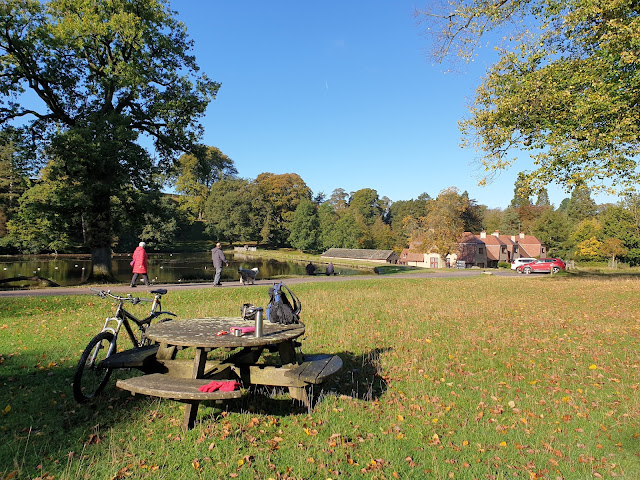 As I climbed out of the park before heading towards New Mills, I visited The Cage, an old hunting lodge amongst other things, from which there were views over Manchester to the South Pennines, towards the Welsh hills to the south, and across the Peak District beyond New Mills. 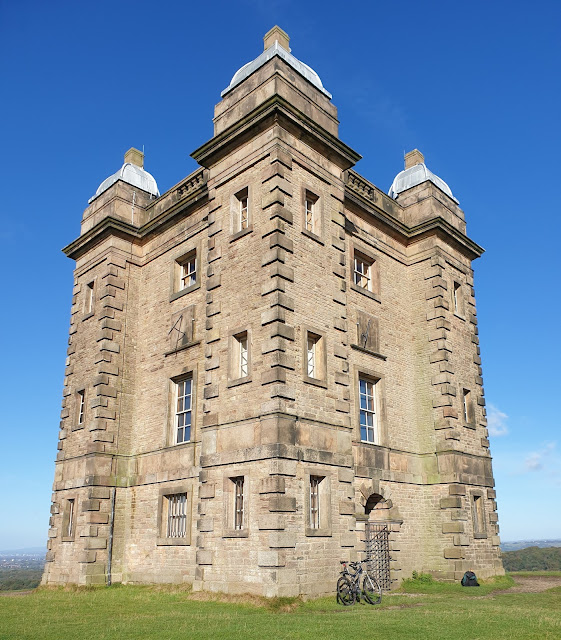 After admiring the roaring of the nearby rutting deer before leaving the park, I enjoyed some entertaining tracks, here crossing a bridge that for as long as I can recall sports warning signs that it's unsafe and possibly in imminent danger of collapse! After a short ascent, a left turn was taken along a well signposted track that led to Long Lane - a bit muddy after the nice surface shown below. 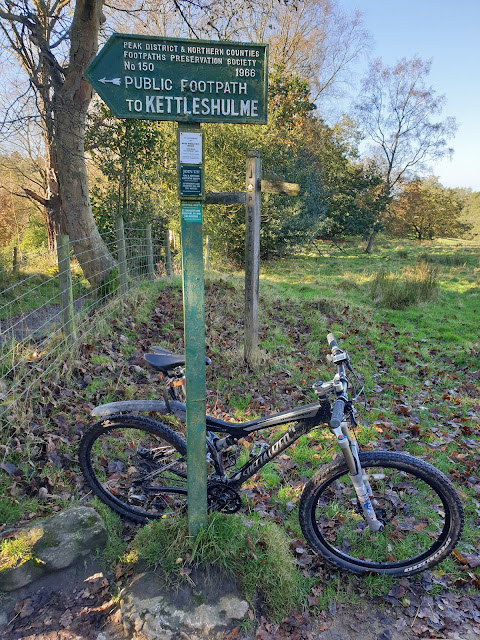 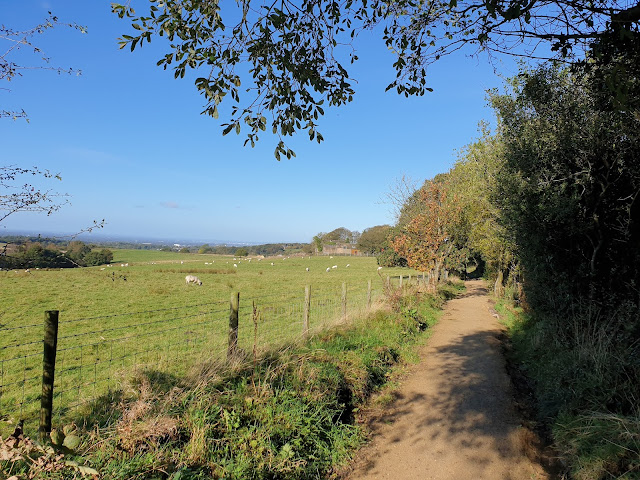 A rough descent (Andy Wright walks it, but with the full suspension bike today I was able to descend at a steady pace) took me across the main road and under a railway bridge, to reach the tranquility of the Peak Forest Canal for an easy pedal into New Mills. 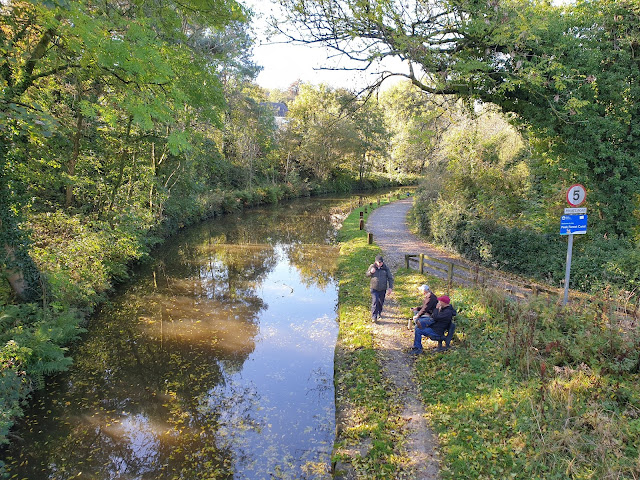 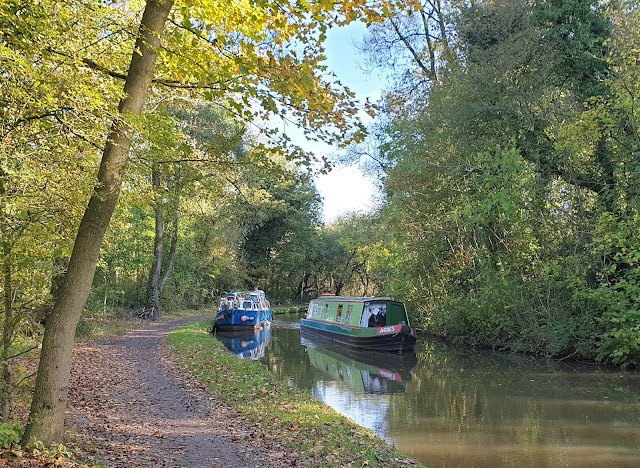 After passing the sweet factory, a left turn leads downhill to the Rock Inn, where a right turn found me on top of the viaduct pictured here. 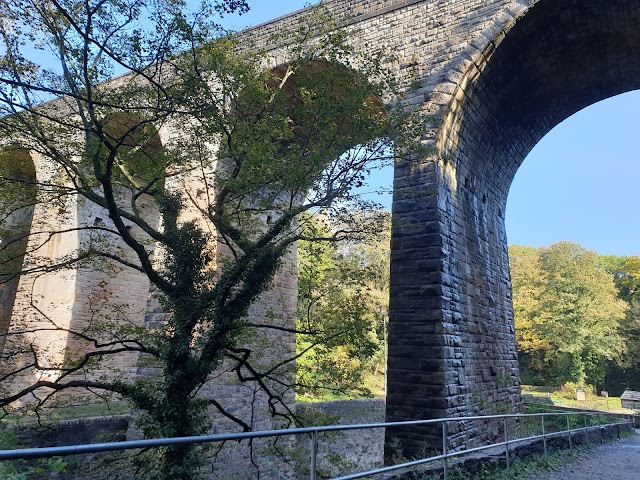 It's correct to turn right at the Rock, but it's the left, not the right, path that's then taken. I've made the same mistake before. Anyway the correct path goes downhill under the viaduct and across the River Goyt to reach the remains of Torr Mill. This would be a good place to stop when doing this ride with just a single break. 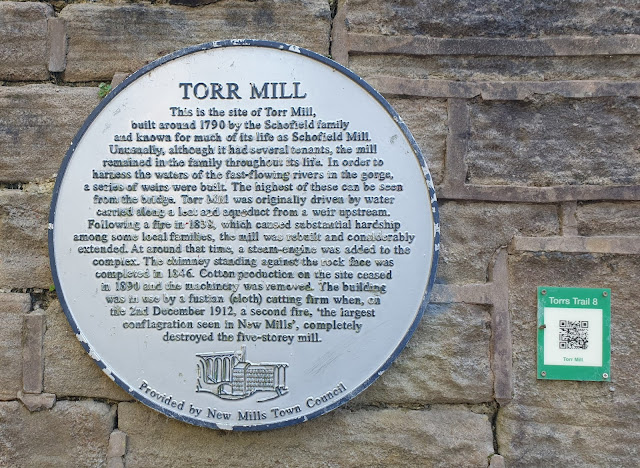 The route then doubles back beside the river to reach the Millennium Walkway. 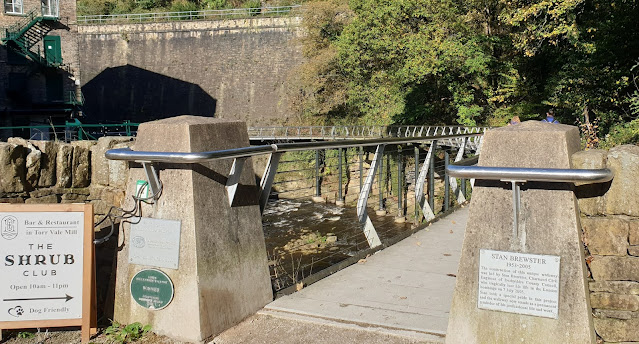 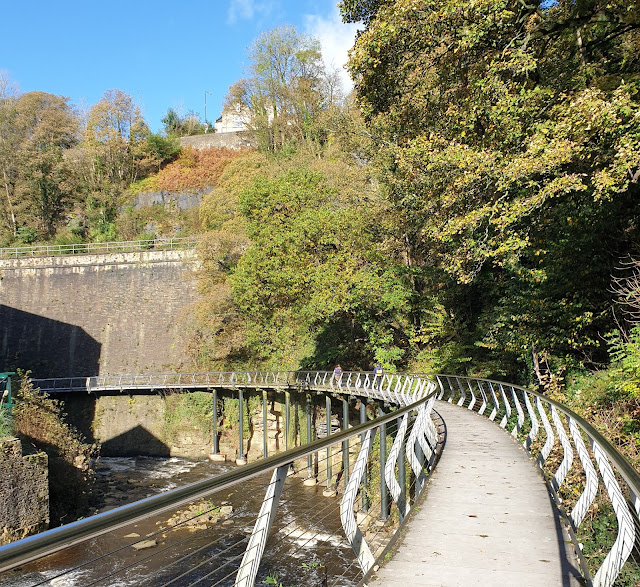 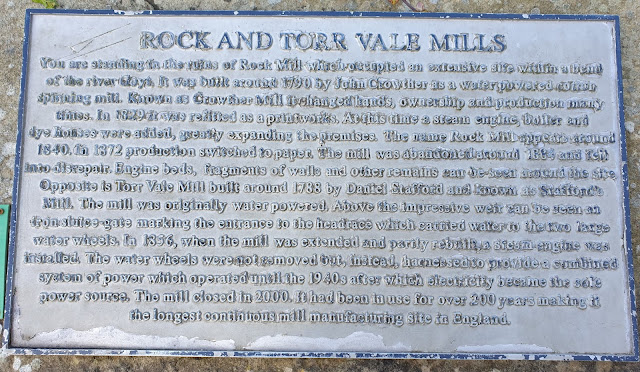 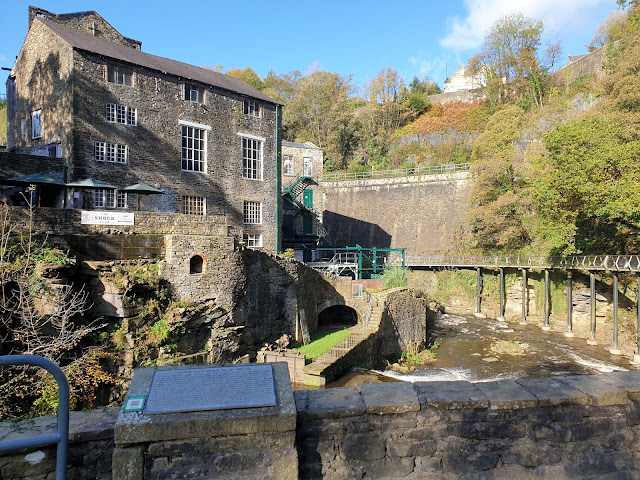 After this I made another mistake and took a steep path up to New Mills railway station. I should have continued beside the river for a little further, then doubled back on a more gentle ascent to reach the same place.
St Mary's Road then ascended to a left turn towards Brook Bottom. This road soon becomes single track and offers a few benches that sport good views back across the valley towards Lyme Park and The Cage. 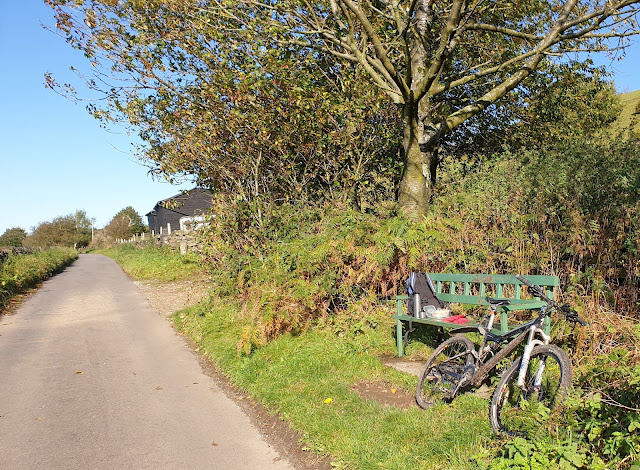 A little further on, outside the Fox Inn, I spent some time with a chap who was trying to work out the course of the Goyt Way footpath. He had arrived on the signposted path from the valley, but couldn't work out where it went from here. Nor could I. He eventually settled for walking down Brook Bottom Lane and reaching the Millennium Walkway from the direction I had come. His was one of numerous friendly encounters I enjoyed in today's perfect weather. 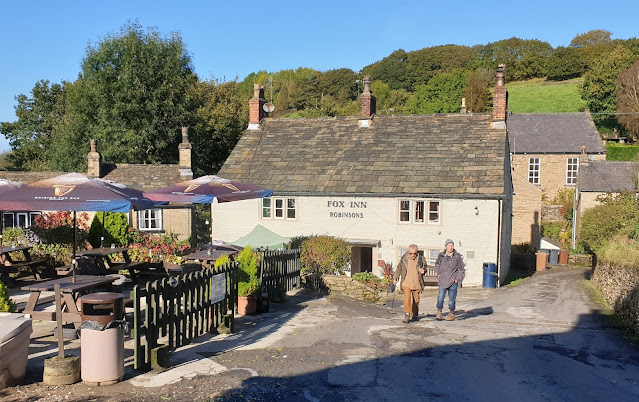 By now my phone battery was running very low, so I could manage only one further photo, of Mellor golf course, which is nothing if not hilly. The picture is deceptive - that hill is steep! 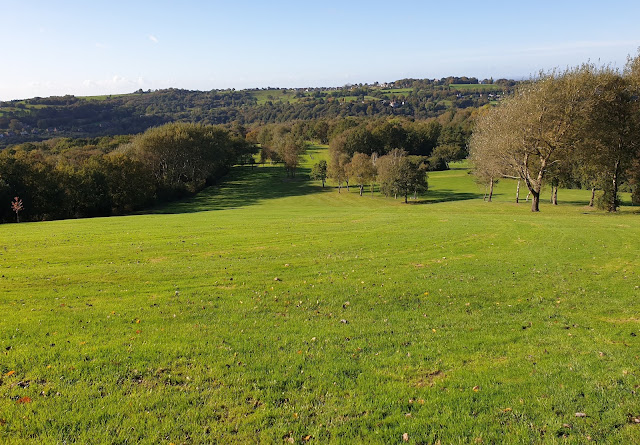 Quiet lanes then drew me through Mellor and down to Marple Bridge, before a long ascent on the main road into Marple, and a turn to reach my start and finish point.
An off road section by Mellor Hall did present the sight of a kestrel, hunting just a few metres away, oblivious of human presence.
Here's my route - click on the image for a better version - about 30km with 500 metres ascent. It took me three and a half hours, of which a good hour was spent resting or chatting. 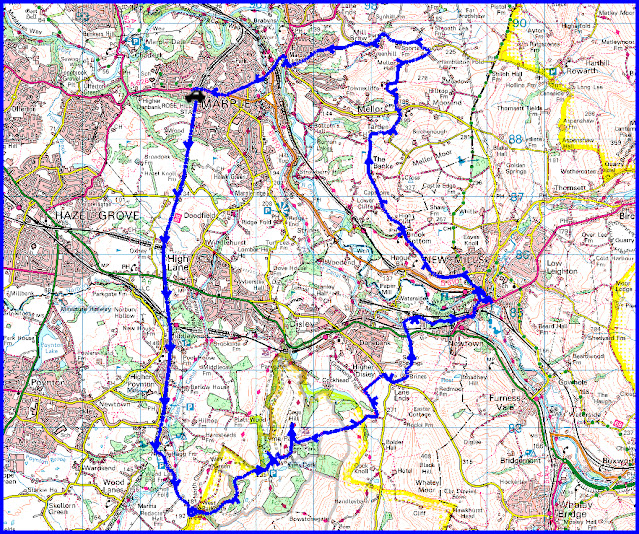 A pleasant and not particularly challenging route, on a lovely October day. Brilliant.
Posted by Phreerunner at 22:43