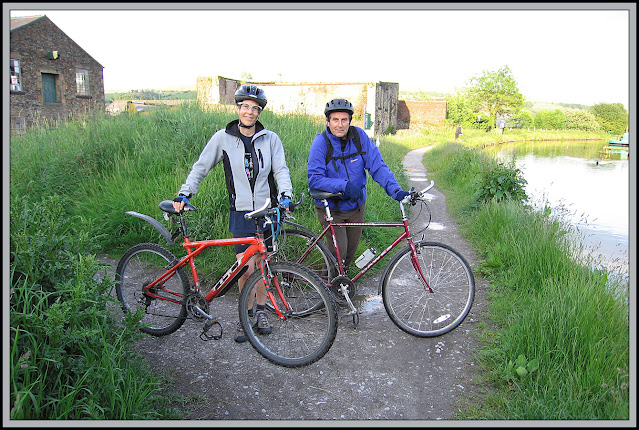 Strines and New Mills from
After a last minute rush to get the bikes ready after all of eight months since their last outing, Sue's puncture was repaired and a seat removed from the Espace to allow them to be wheeled in without difficulty.

Then a thirty minute drive to , where Andrew was waiting with his new Garmin Vista C GPS unit - like mine but in colour. Our bikes needed a good oiling (rusty chains) before setting off down the familiar paths to New Mills (see map).

The track past the paper mill was very muddy and narrow, but fun, and the sweet factory by the canal emitted contrasting odours.

Then a jolly descent into New Mills, where we zoomed around the Millenium Walkway, high over a curve in the River Goyt, before climbing slowly out of New Mills on a nice evening all the way up to Brook Bottom. We eschewed the pub (Fox Inn) in favour of continuing to the end of the ride on nice tracks until the final rocky descent to .

Despite blinding sun, Sue kept up (nearly), though Andrew did a bit of walking here.

Adjourned to the Bridge Inn in .

That was an 'archive' entry, and the map is shown below. I may have got the bit through New Mills slightly wrong, but the instructions, written in 2005 and included here below the map, should still be correct. The old 'topwalks' web page is here, and that points to a blog entry here. 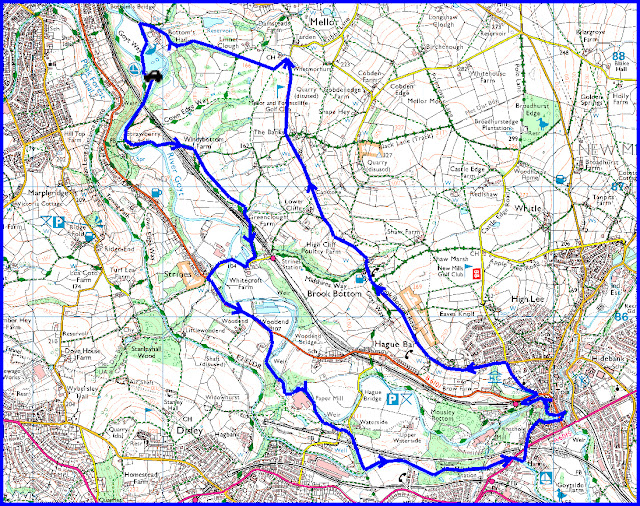 The ride starts out left from Roman Lakes and follows the track by the river, under the railway, then alongside the railway before emerging onto a track by a farm. Turn right over the railway then down to a T-junction where a right turn takes you to the B6101 at Strines. Turn left here* and after about half a km take a bridleway on the right immediately after a farm drive and before the river bridge. Emerge from this narrow track past the paper mill at a road.

Turn left up the hill then right at a junction up to the canal bridge. Double back under the bridge along the towpath to the left, keeping on the towpath past the sweet factory. Turn left immediately after passing under the road bridge to join a small road that leads down to the main road (A6015).

Go straight across and keep right at two junctions until the road ends at the Rock Inn. Take the track on the right down into The Torrs, crossing the River Goyt at the bottom (if you reach the picnic benches you've missed the left turn towards the Walkway) before turning left next to the river and crossing the Millenium Walkway above the river. Immediately after that go right up a steep path to emerge by New Mills railway station. Turn right up the narrow road to the top.

Cross straight over and climb steeply up , turning left onto . Keep on the road, passing through Brook Bottom before a further climb to a farm. Descend the hill, but take first right soon after the last houses (easily missed) at the next junction onto an ascending narrow sandy track leading to a wide track at a group of cottages. Continue down and then along the road across the golf course to a junction. Turn left, and keep left, following the access road down through the golf course until the tarmac runs out. Then straight on down through rocks, stones, gravel, drop offs, mud and ruts until arriving at the junction of , where a left turn takes you back to .

The only part of this ride that is 'off the saddle' is the steep path after the Millennium Walkway. It's a good, varied route, suitable for all. Allow a good two hours, including breaks, though a fit mountain biker would take well under an hour for this route.