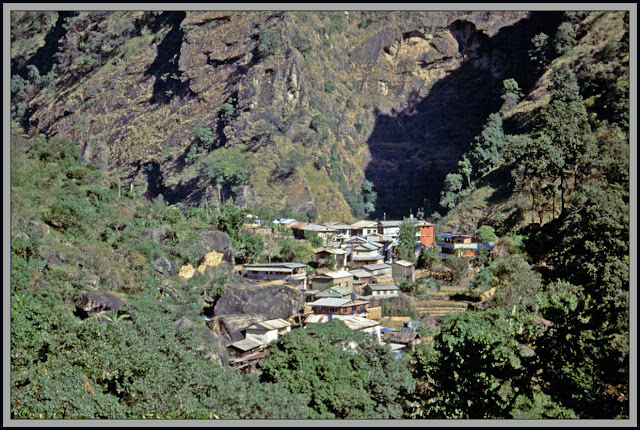 Jagat from the south

Friday 5 November
Sange to Tal (1707m)
Itinerary: DAY 5 Tal (1,707m) We start to climb gradually to Jagat (1,314m) which used to be an old custom post for the salt trade with Tibet. Our trail then follows a cut in the vertical cliff high above the river. The vegetation starts to change into rhododendron followed by pine. Enjoying the view of some beautiful waterfalls we arrive at Chamje (1,433m) where we cross the Marsyangdi again and follow the east bank. From here the valley begins to narrow and our trail begins to be steep. As we reach the top of the zig-zag trail, the valley widens again and on a beautiful meadow nestled among the fields of potatoes, wheat and barley appears the . It is the starting point of Manang district and our camp for tonight. (5 - 6 hours walk).

[Diarist: Martin]
6 am prompt - tea boy calls. He seems surprised that our tent wanted two cups. We were out at 6:30 on a clear morning. Not too cool. Breakfast 7 am - cereal, porridge, toast, omelette. Quite adequate, but nothing like the luxurious breakfasts we got in . [There's another diary project! - Ed]

Ablutions: some used the blue toilet tent with the dodgy seat; I used the local 'shithouse'.

8 am and we were herded off, across a superb suspension bridge then up the west side of the Marsyangdi river, roaring noisily below. The sun reached us surprisingly early at 8:15. Time to stop for t-shirt and shorts, allowing the others to continue ahead with Hosta. Rare moments of calm as we ascended slowly through jungly country in the deep sided valley. 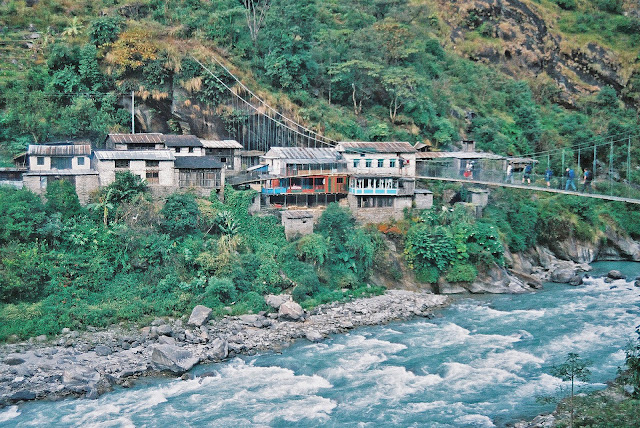 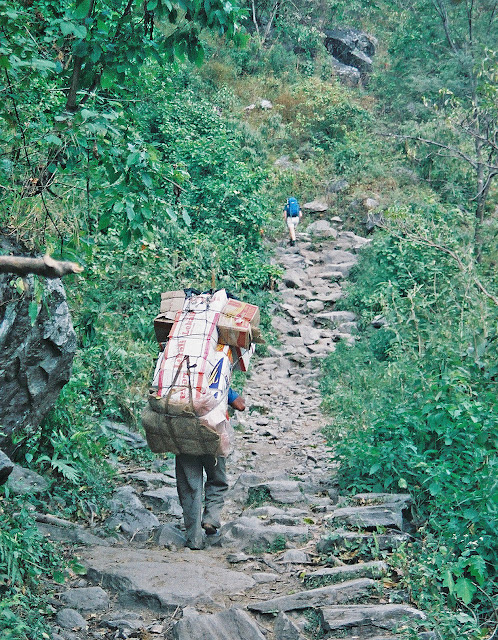 Then a shady section where I found myself alone. But soon we reached a tea shop - Marco Polo - at 9 am. 'Rested' there for about 30 minutes. Mark's solar panel camera battery charger was used for the first time. It seemed to work, and drew attention from a French party. 1300 metres, 21C. Too soon for tea, so we continue on to Jagat - 10 am. A pleasant village with boys playing shove halfpenny and women styling hair and sweeping the streets. 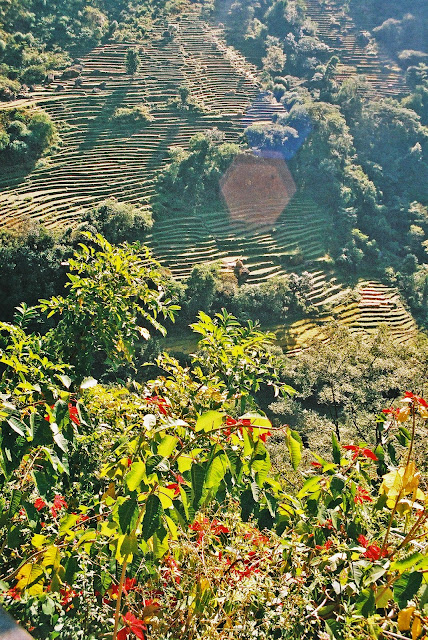 View from Marco Polo restaurant
We seem to be beyond the power lines today, so everything is gas or kerosene powered. Or solar powered, as is this restaurant - 10:45 to 12:15. 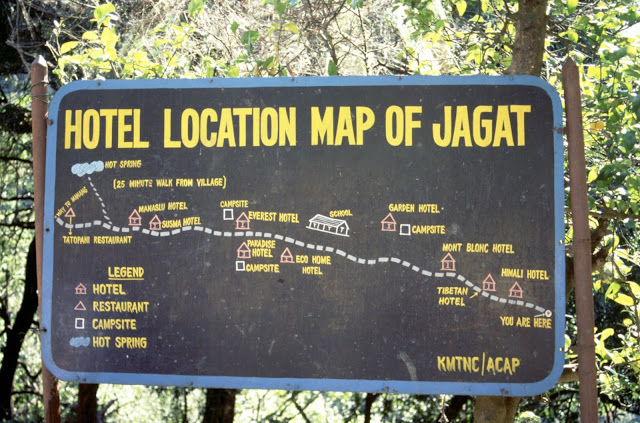 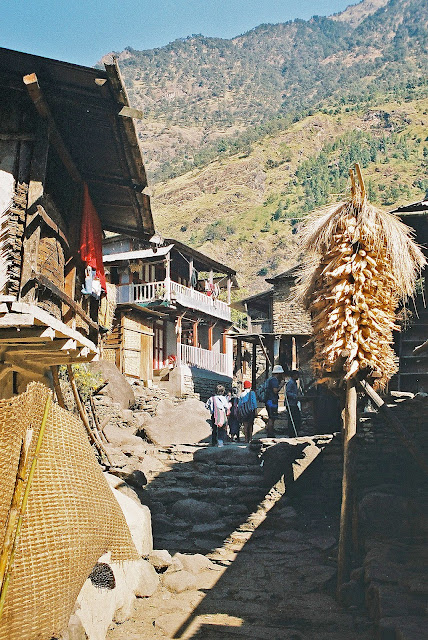 Jagat
Then we continue on up towards Chamje to around 1345 metres. Lunch in the shade in a meadow just beyond a bridge. En route a huge waterfall with its spray embraced by a rainbow. Lots of photos. 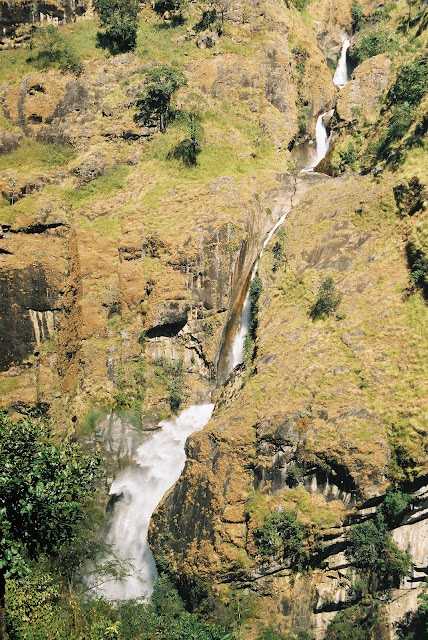 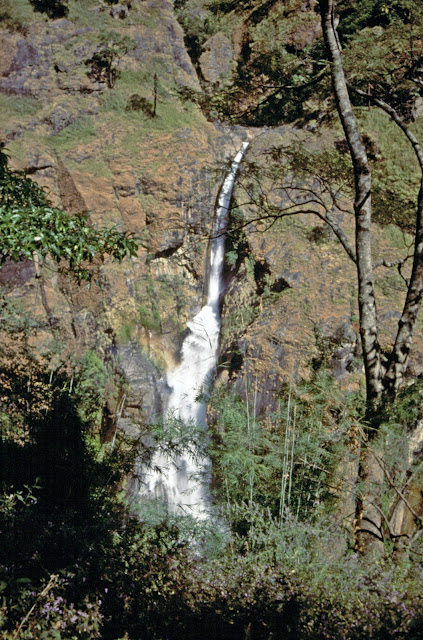 Continue gently up to Chamje - a nice village. The school playground had a splendid four seater swing. Still lots of people today - those coming down have probably done the Manaslu circuit - a similar trip to ours. Some people rush past. Other faces become familiar, eg the small French group. 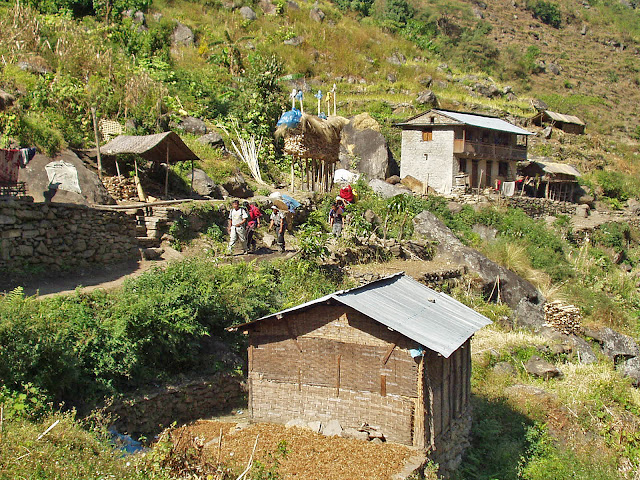 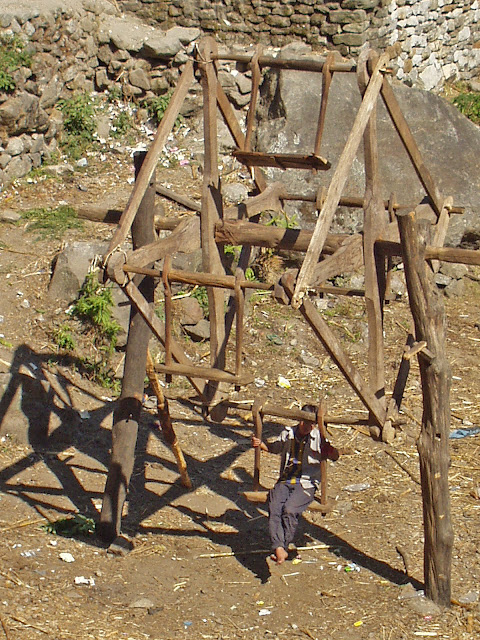 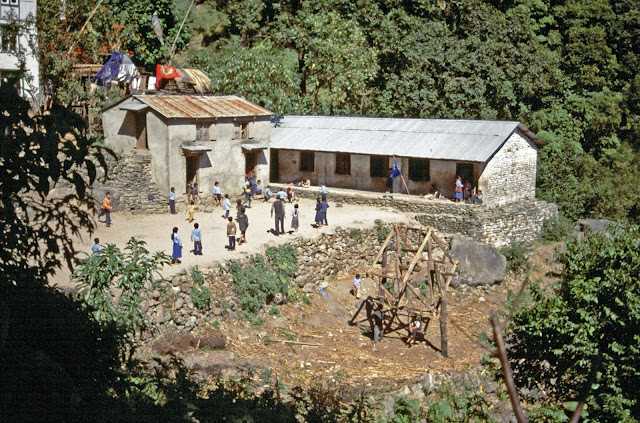 We left this nice spot at 1:45 and took just over 2 hours to reach our destination - Tal - 1707 metres. We were surrounded by other groups, mostly moving quicker than us. Lots and lots of people. Occasional tea houses. Marijuana plants at our lunch stop were just brown scrub. 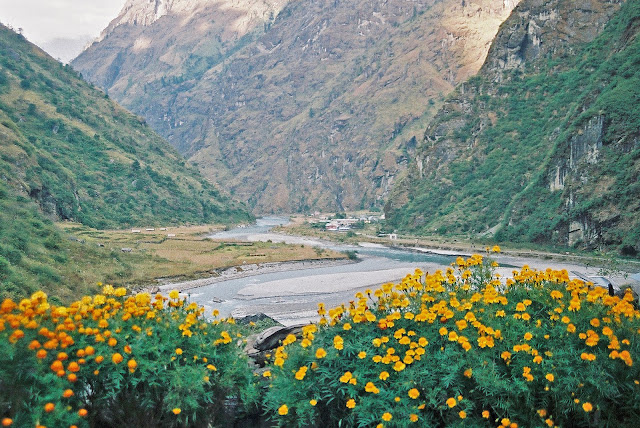 View to Tal from the gateway to the Manang District 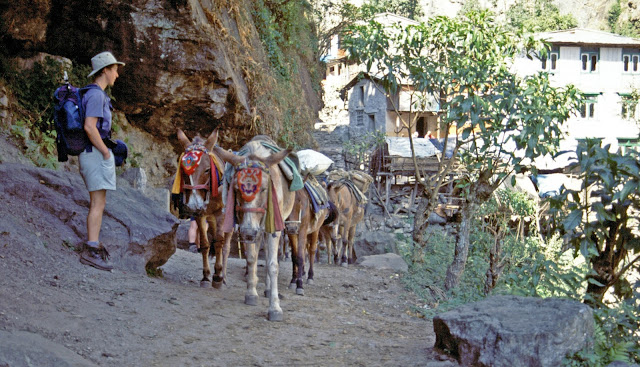 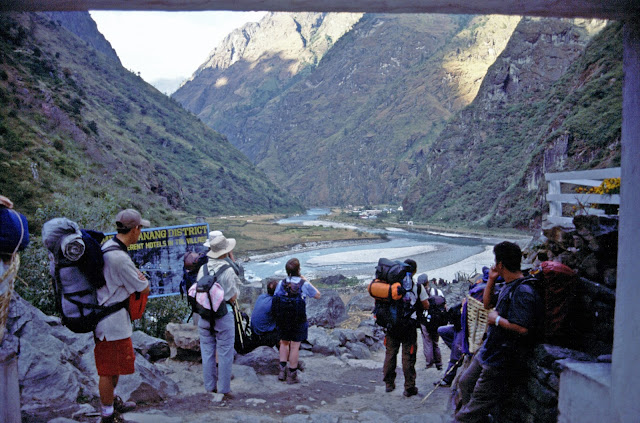 And so, after passing a campsite with lots of groups camping on it, we arrived at a Tibetan tea house at Tal. Our tents were pitched tightly together in the garden between beds of marigolds and a garden border of upturned bottles (bottle bottoms). Chickens abound (maybe one less by dinner time) and a small black cat peers through a fence, purring. 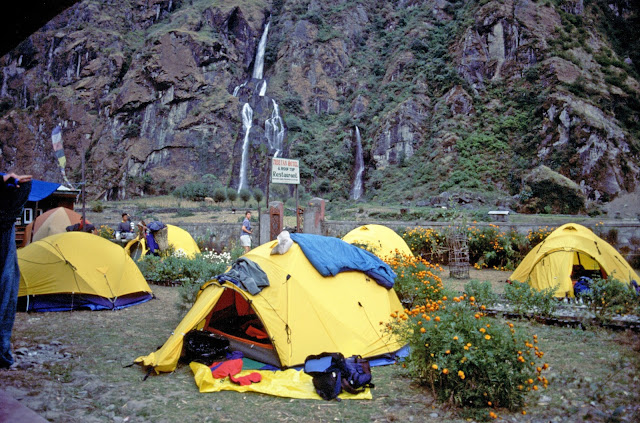 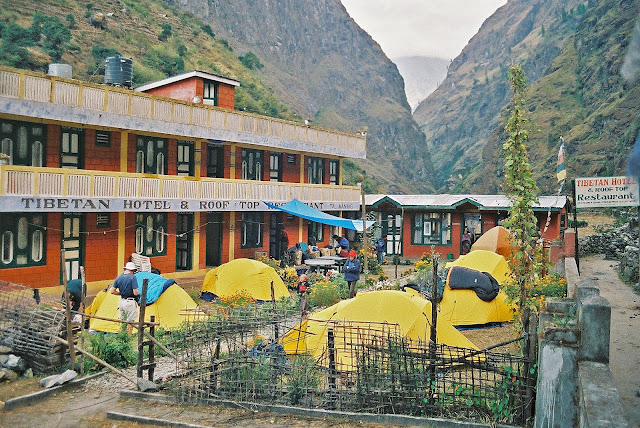 We stop our altimeter logbooks and decide that Andrew's 1-minute interval as compared with my 10-minute interval gives him a more accurate measurement. (See 7/11) 836 mb and 20C when we arrived.

Hot water soon arrives, then a call for tea, fortunately in the tea house where it is warmer, then a pleasant hour and a half with tea then beer before our meal. 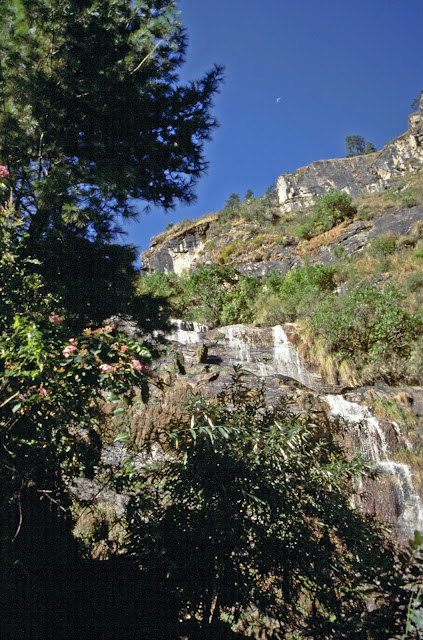 View from Tal
Next Day
Previous Day
Index
Posted by Phreerunner at 09:01