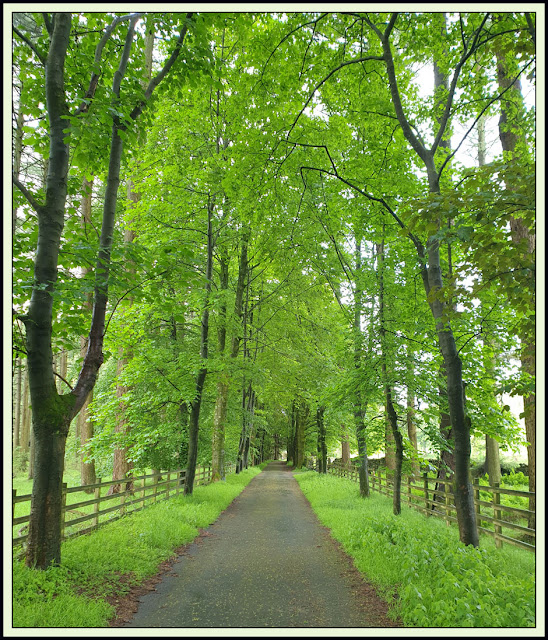 This three hour walk starts from the large lay-by at Langden, in the Trough of Bowland beyond Dunsop Bridge. It starts up a lovely avenue of trees beside a tarmac track to some Water Works buildings by the Langden Intake. A cuckoo was in fine voice, and grey wagtails tracked my progress.

Beyond the buildings, a sort of welcome to the 'open access' but highly restricted 'Forest of Bowland', where raptors are still persecuted by grouse murderers. 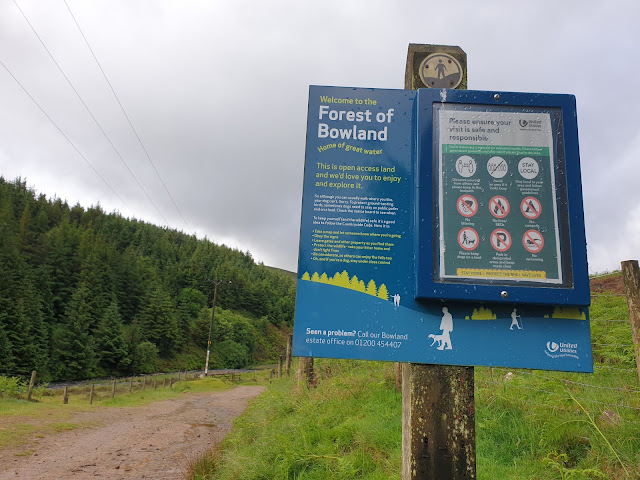 United Utilities have a second information board regarding Langden Intake. 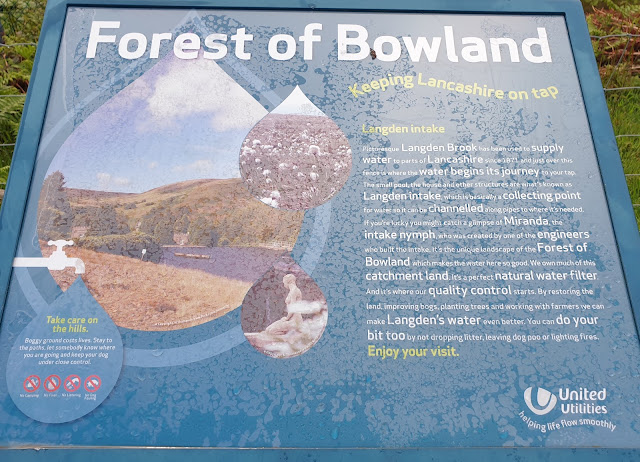 There had been some heavy overnight rain, and as I walked along the track beside Langden Brook I was pleased to be wearing boots rather than the usual trail shoes today, as there were rivers to ford, and those rivers were in spate. 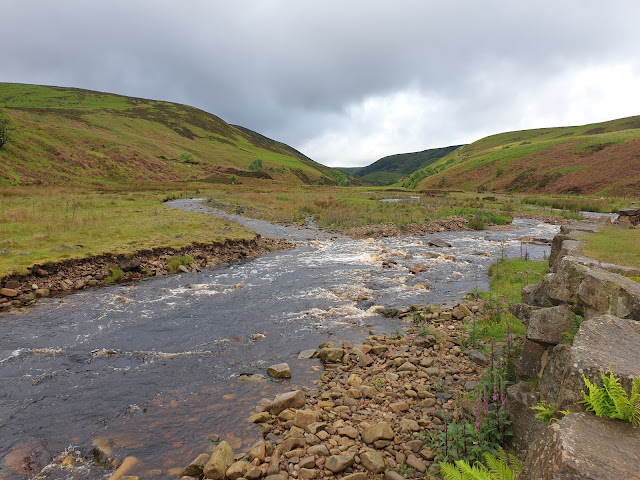 Never mind the rivers... the footpath was in spate! 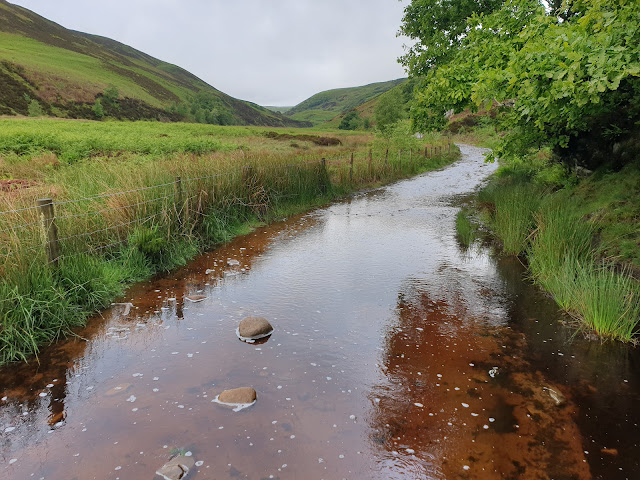 I soon passed a memorial to the victims of three separate nearby air crashes involving the RAF, the Polish Air Force and the Royal Canadian Air Force. 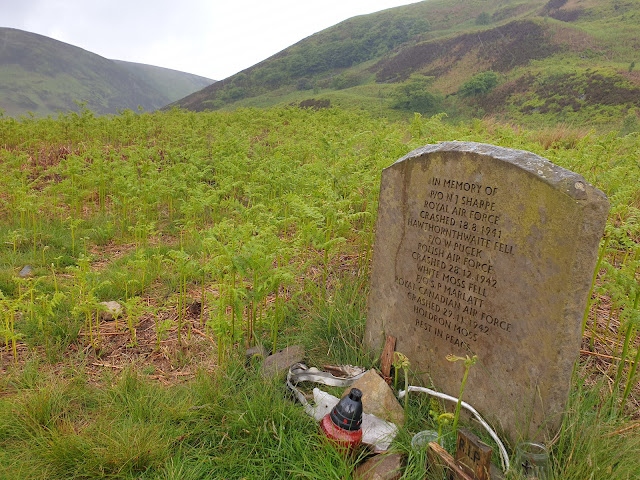 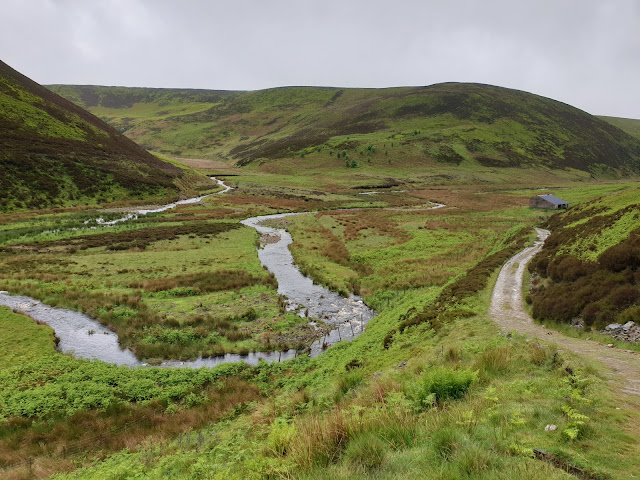 I stood in the marsh to take a picture of Langden Castle, which is simply a barn with two ornate windows and an arched doorway! 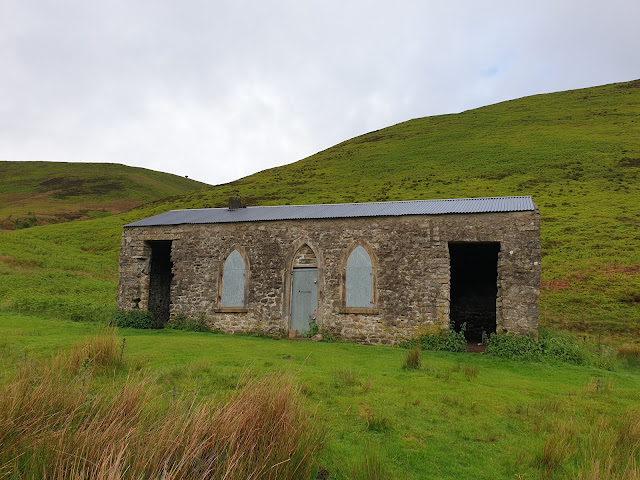 The view up the valley towards the heights of Greave Clough Head was nice enough, but my concern was one of 'how to cross the river without getting wet feet?' (and without taking my boots off). 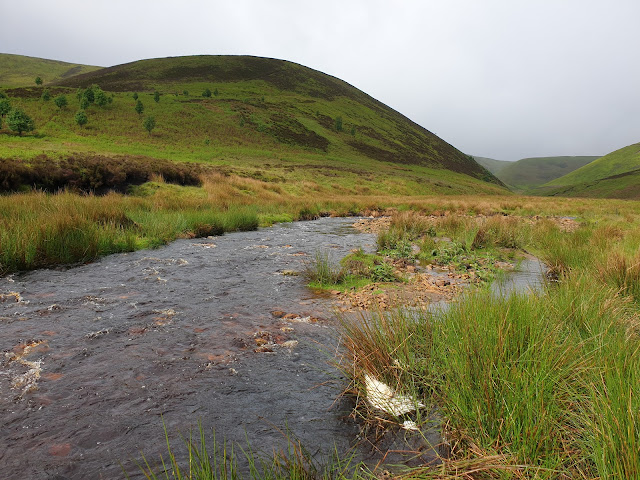 Well, my long jumping skills triumphed, and I could look back across the river to the castle.
A mallard - very shy compared with our local towpath birds who come to us for food - tried to distract me from her young by adopting a 'broken wing' pose, and wheatears chirped from any post they could find on which to monitor my progress. 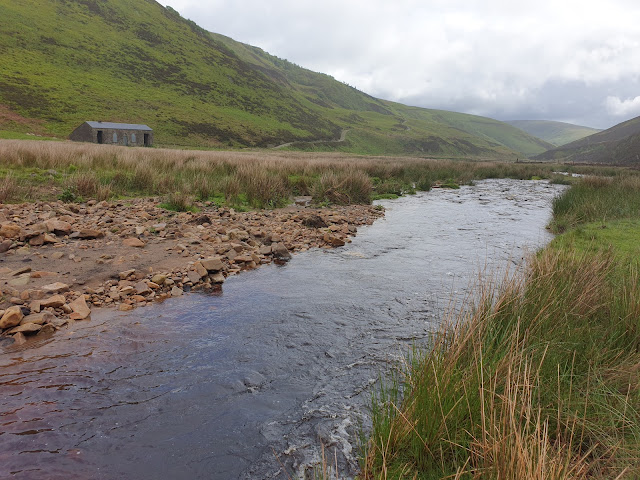 But now I was trapped, as I couldn't easily get back the way I'd come, and Bleadale Water, which I needed to cross, was more in spate than was Langden Brook. In the end I splashed my way across at the point shown below, and despite the water being knee deep my overtrousers, gaiters and boots combined to repel any thought of water ingress! 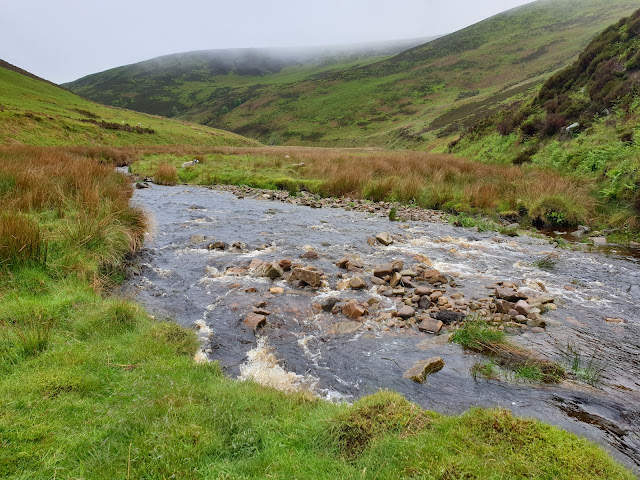 The path then rose gently up the Bleadale valley to the plateau of Hareden Fell.
A suitable spot for elevenses offered this view back down the valley. 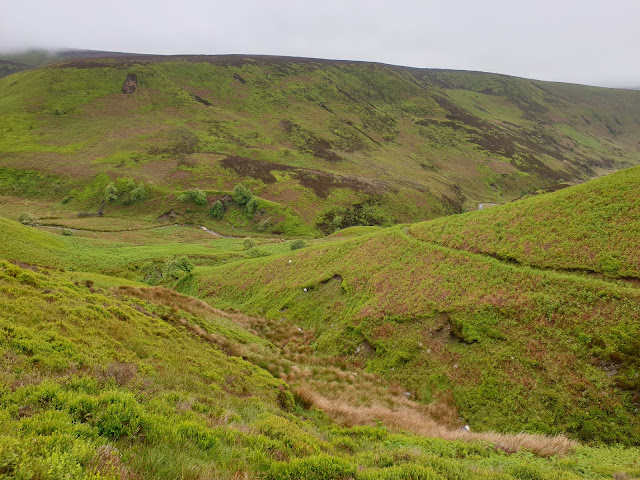 The path came to an end at a white post, after which a plod just south of east, past peat hags, led past a couple of small tooth like rocks to the top of Hareden Fell and some grouse butts, to the left of which it was easy to locate the 'shooters' track' on which the grouse murderers are transported when the time comes for those crusaders to attack. Today there was nobody around until I met a sole walker near Hareden Intake.
It was a 3 km walk down the track to a footbridge, with Whin Fell and other heights of the Forest of Bowland in view beyond a red roofed shooters' shack.

I was glad of the footbridge! Hareden Intake is visible in the distance. 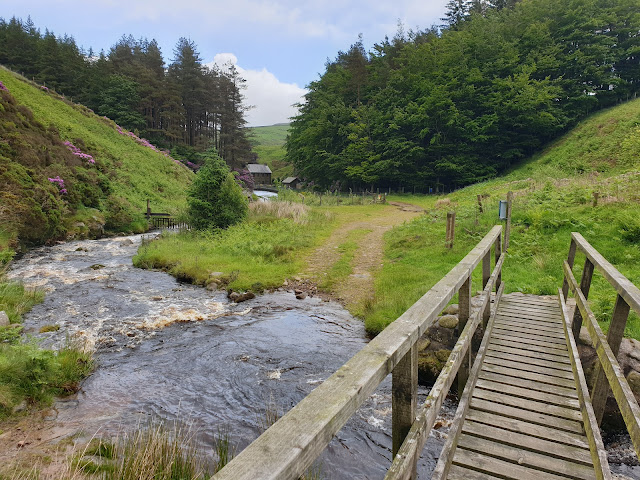 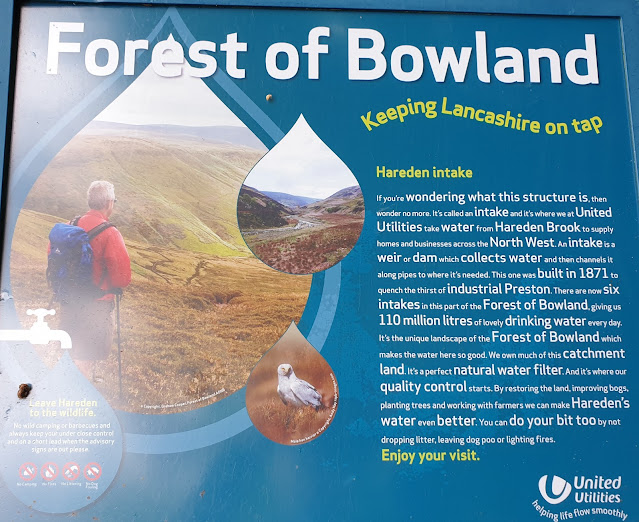 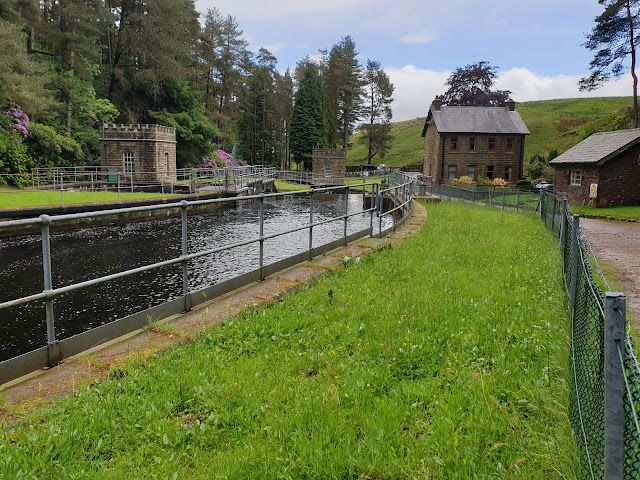 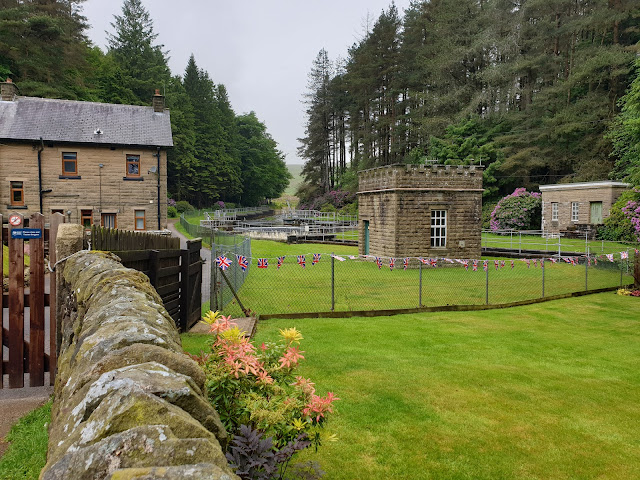 Beyond the intake, my path passed through a farm where sheep were looking for a paddle and the Jubilee bunting was still fluttering in the breeze. 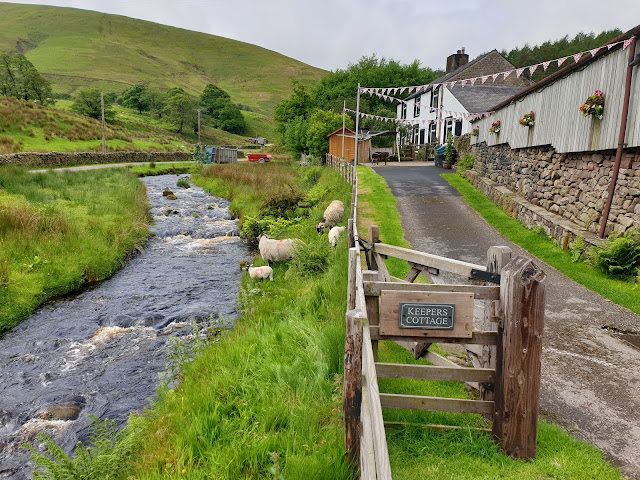 A left turn beyond the farm saw me on a pleasant riverside footpath back to the car parking area at Langden. The small white blooms of heath bedstraw, together with tormentil and thistles, lined the path. 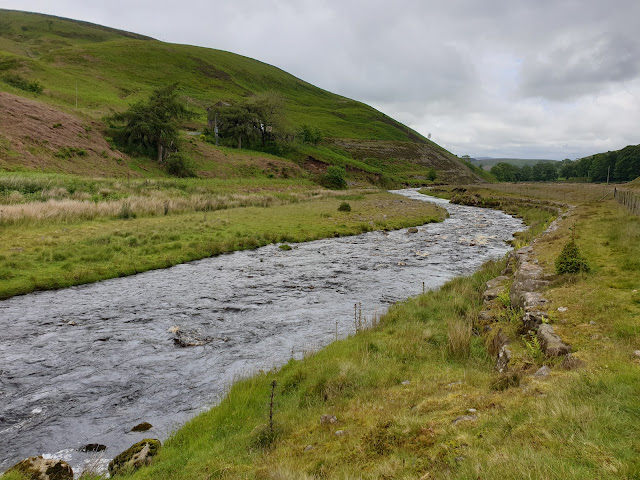 An Airstream caravan took pride of place in the lay-by, here pictured from a distance before I made my way over conveniently placed footbridges to a sheltered spot for an early lunch before adjourning to Bacup, and dog walking with Oscar.

If you click on the next image you can view both Mark Sutcliffe's route and my route in anticlockwise pale blue lines, and if you look carefully you can see that I followed Mark's route pretty accurately on this occasion. My Garmin gadget recorded 11 km, with 300 metres ascent, taking (as Mark suggests) about three hours. A classic walk - a great way to spend a mizzley morning in deepest Lancashire. 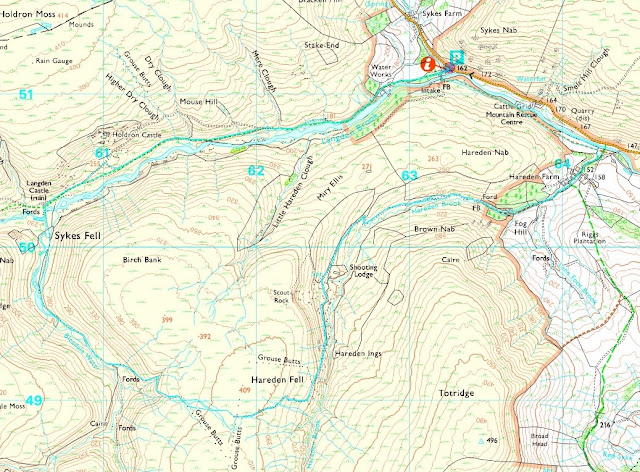 Great walk that Martin, one of my favourites. https://bowlandclimber.com/?s=Langden+Castle
Bleadale always reminds me of a Scottish Glen.
I've overnighted in Langden Castle a few times when you could gain access to the central room, it even has a fireplace.
I take it you didn't see any raptors!

Yes BC, this is the same route as the one you took in May 2019. A kestrel was the closest I got to seeing a raptor, nor did I spot any ring ouzels.
It was indeed a great little walk. I was lucky to keep my feet dry!