May 1977 - A High Street circuit, the Brecon Beacons, and Runswick Bay 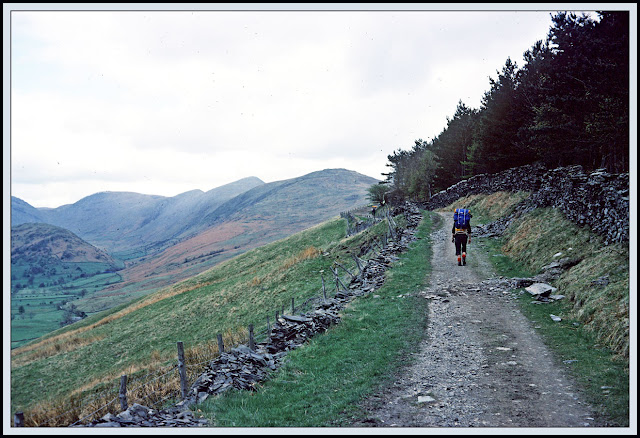 14 May 1977 - and I'm following Pete Morley up the Garburn Road in the Lake District, with the summits of High Street ahead. I'll continue by way of captions, as I've found no diary for this period. If you click on a picture you might find a slideshow of better images, but the captions won't appear.

It looks as if this trip's participants were Pete Morley, Dave Scruby, Gary Beighton, Roger Freeman and myself. 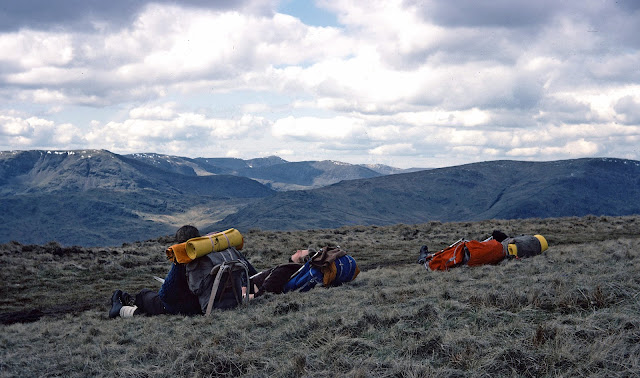 This backpacking route from either Troutbeck or Kentmere took us to the summit of Yoke (706m), where we rested on a fine day.
My old red Karrimor Tote-em Senior can be seen - fairly new at the time. 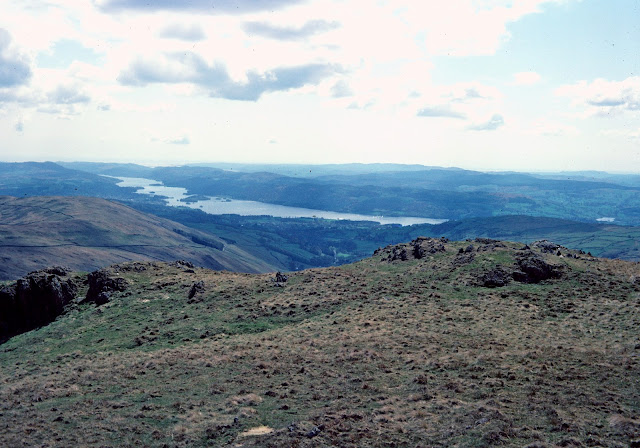 There was a good view back along the length of Windermere. 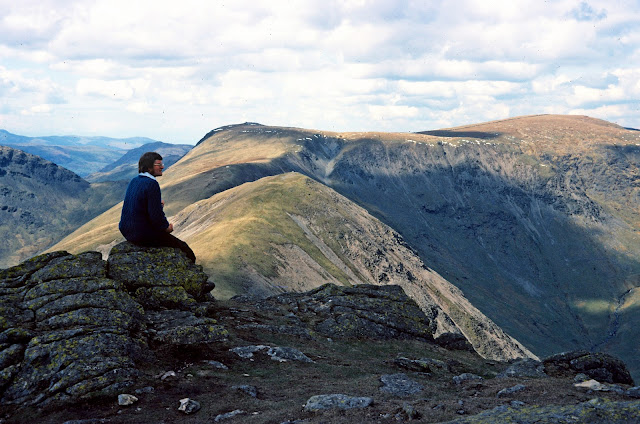 Roger posed for this photo, looking north, on the top of  Ill Bell (757m),
as we continued along the High Street ridge. 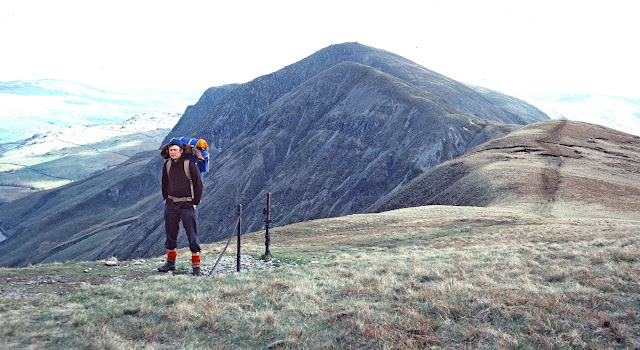 Pete is pictured here on Thornthwaite Crag, looking back down the ridge. 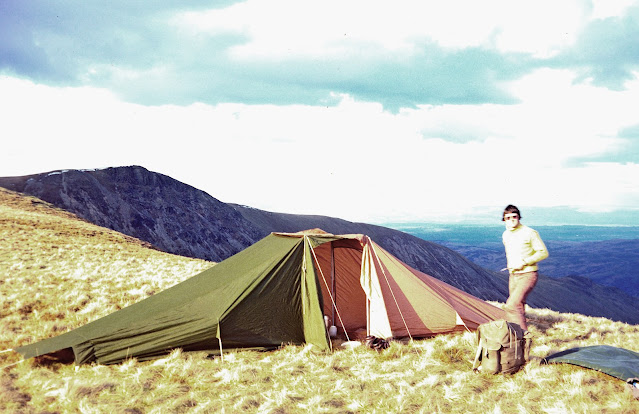 Our high level camp, circa 700 metres, was near The Knott (739m). I suspect that Frank Brierley's Karrimor wedge tent was borrowed by Gary Beighton for this trip, and it was fastened to my green wedge (still available for use in 2022) to give us both a nice enclosed porch. 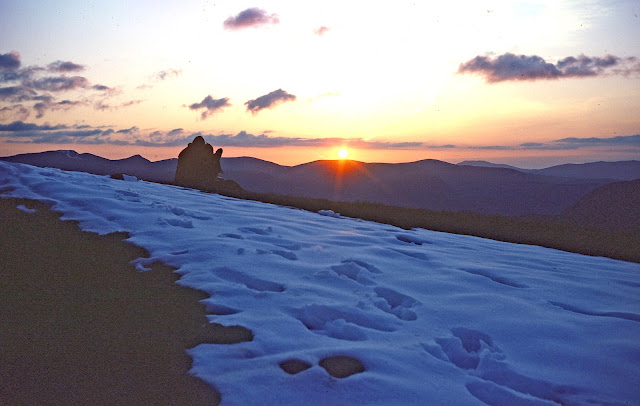 The day ended with a stroll to the summit of The Knott at sunset. 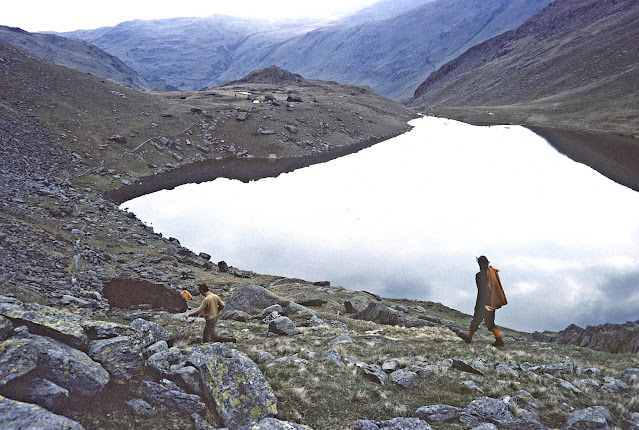 The following morning, we headed back over High Street and descended to Blea Water. 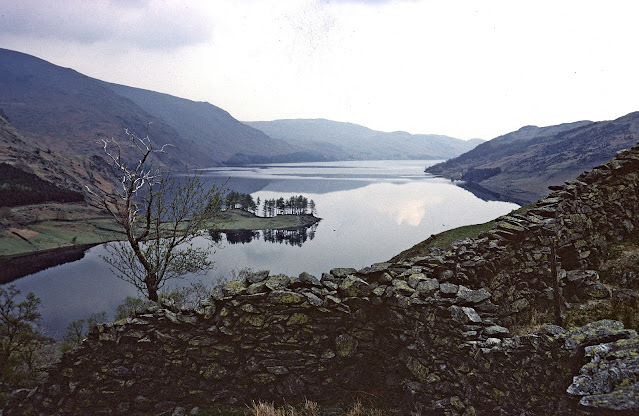 Then we descended to Haweswater Reservoir, not the most direct route to Pooley Bridge! 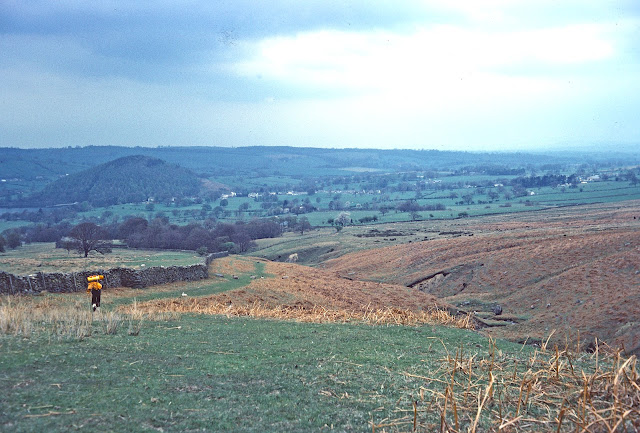 My final snap from that trip shows one of our (heavily laden) number on the descent to Pooley Bridge, where perhaps we had left a car in which we squeezed in tightly, that would return us to another car from where we started the walk.
If anyone has a better memory than me of this trip, I shall be pleased to insert it here....
The following weekend, 21 and 22 May 1977, a few of us met up in the Brecon Beacons, basing ourselves at Ystradfelte and maybe meeting up with Martin Elliot's Cragrats (though they do not appear in the photos, so that may have been a different trip). 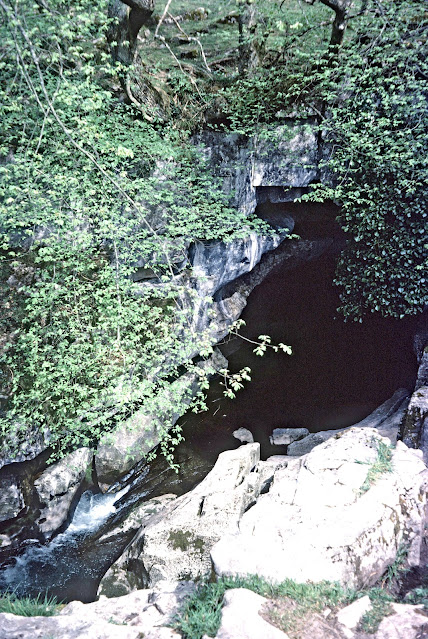 This cave at Ystradfelte is possibly the one into which we used to enjoy crawling quite a long way. 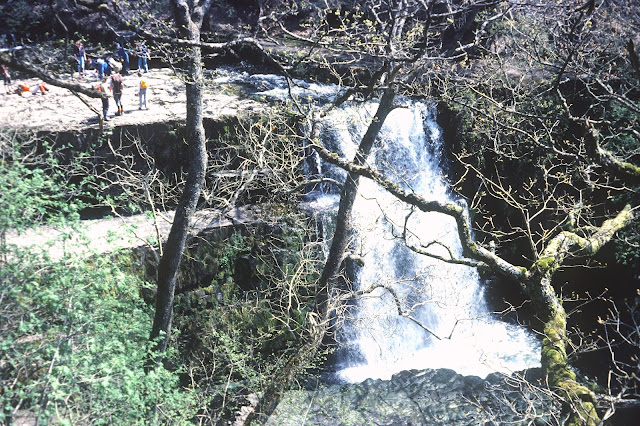 We visited waterfalls on the Afon Mellte, on the beautiful 'Waterfall Walk'. 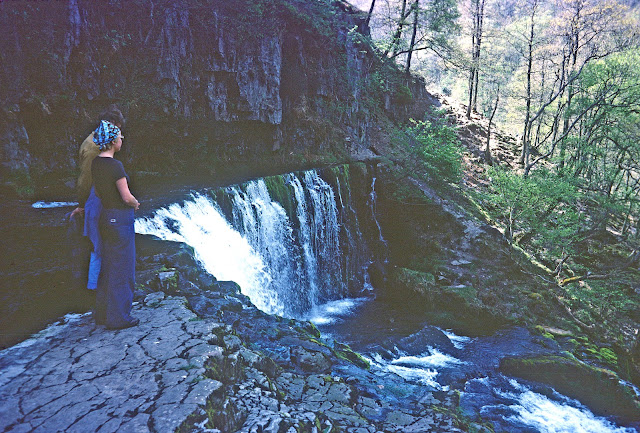 John Mansell (RIP) joined me on this trip, and we met up with Christine Cartledge, who was on the same course (biochemistry) as me at UMIST, and her Australian boyfriend, Richard.
Bob Selig was also there, but I have failed to scan any photos in which he might appear. 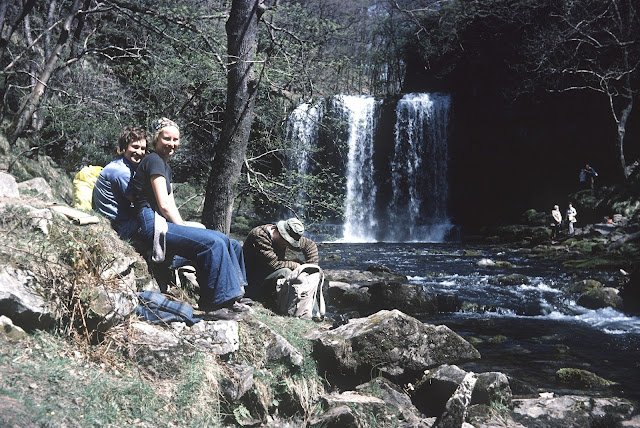 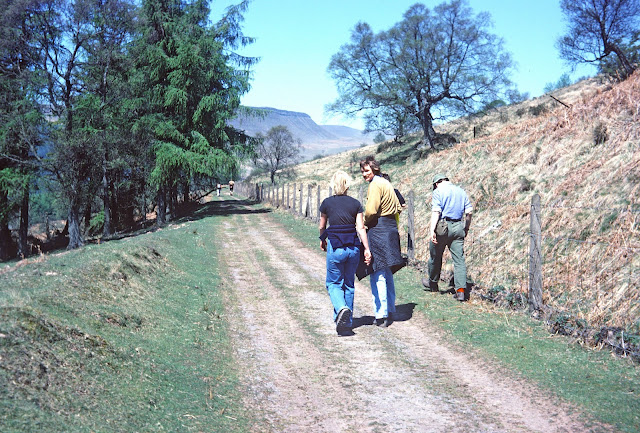 The following day appears to feature blue skies.
The above picture was taken on the Roman Road by Tor Glas. 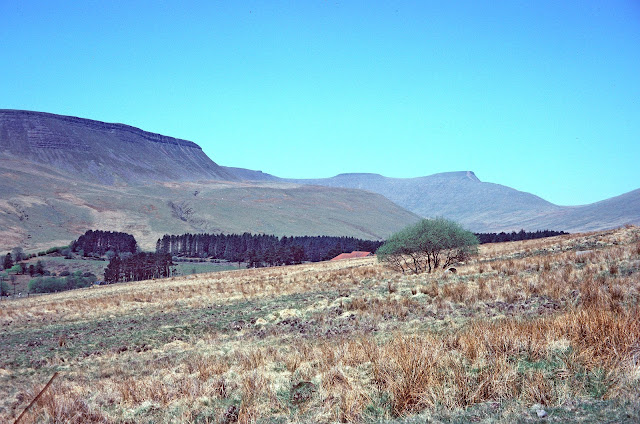 We clearly enjoyed a walk in the Brecon Beacons, finishing up with a splendid view (below) to the north, with the Roman road conspicuous in the washed out (maybe it was hazy, maybe the camera, or its operator, couldn't cope!) scene. 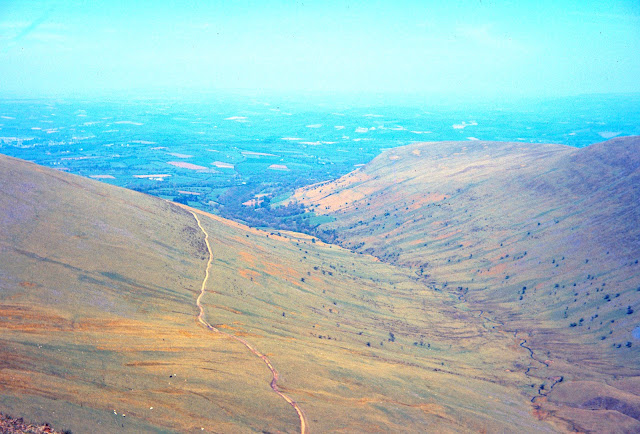 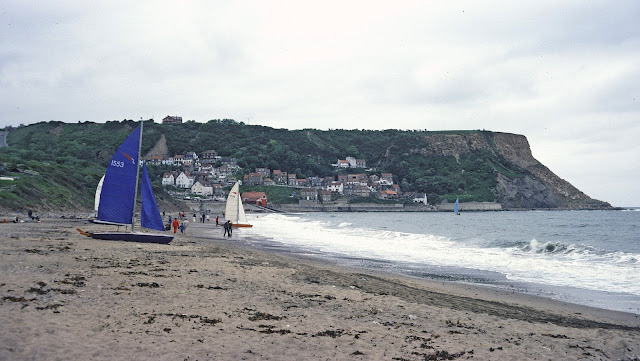 I can identify John Clark and Laurie Marshall (RIP), who are also the dam builders pictured below, but the three looking away from the camera remain a mystery. Perhaps Bob Selig, Don Waye, and someone with a football that matches his jumper...? 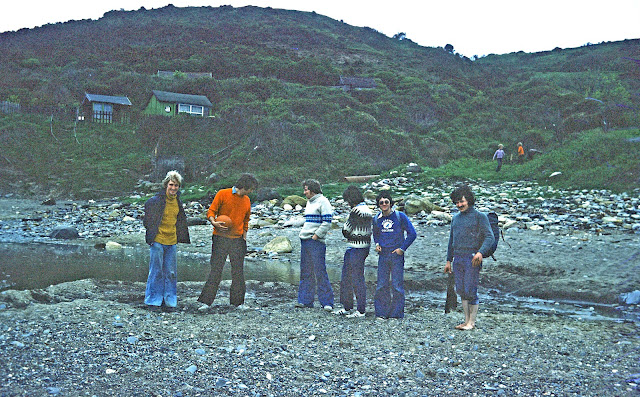 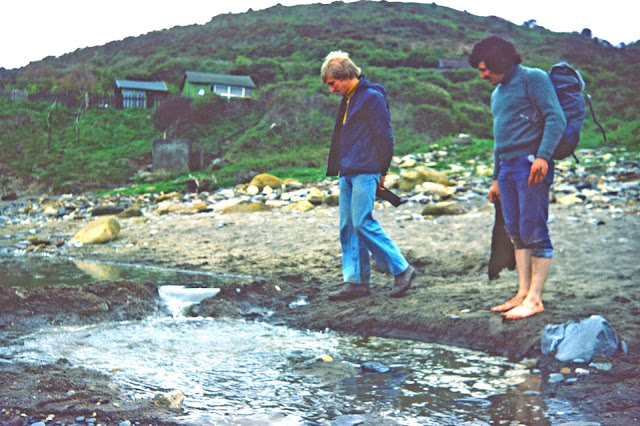 And that was May 1977 - without these pictures it would be an even woollier memory.
Posted by Phreerunner at 21:16