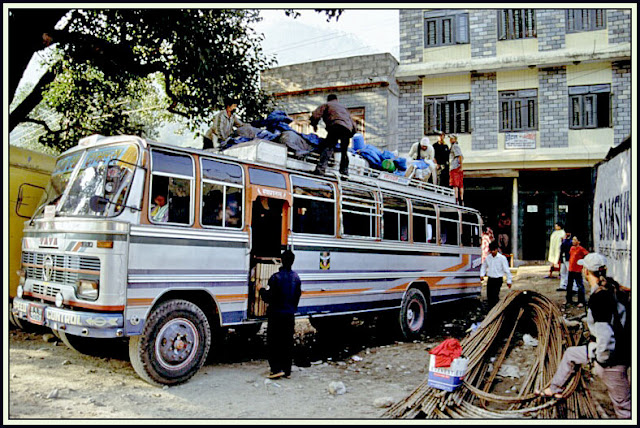 Itinerary: DAY 19 Drive to Pokhara (900m) We take a short walk to cross the and drive to Pokhara, a lively town beside situated at the foot of the . Upon arriving at the hotel we say good bye to our trek crew. In the afternoon you can wander around the lakeside, take a boat ride or just relax. (4 - 5 hours drive depending on road conditions). Resort on bed and breakfast.

[Diarist: Martin]
Last tea call of the trip at 6 am - hot water follows shortly after.

Porridge and omelette for breakfast, then a leisurely time before we strolled for 15 minutes through , across the bridge to a 'traffic zone'. Good views up the Kaligandaki to mountains.

A bus had been hired and all kit, etc and crew were being installed. They all got off for a group photo, then we embarked on the road to Pokhara. The driver of the Tata bus was careful and the first hour along dirt roads wasn't scary despite views of the gorge, far below under unprotected drops from the track. The bus to Pokhara 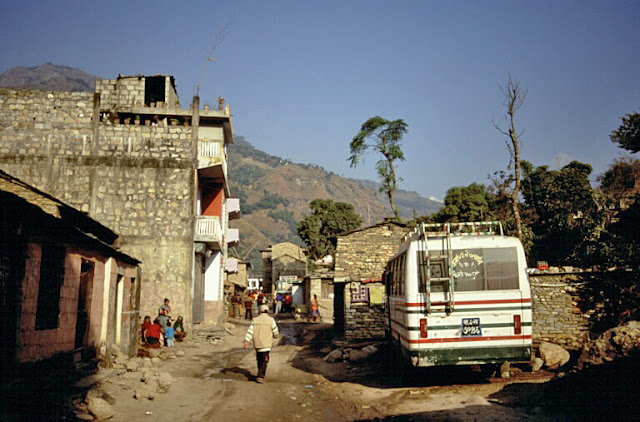 A street in Beni 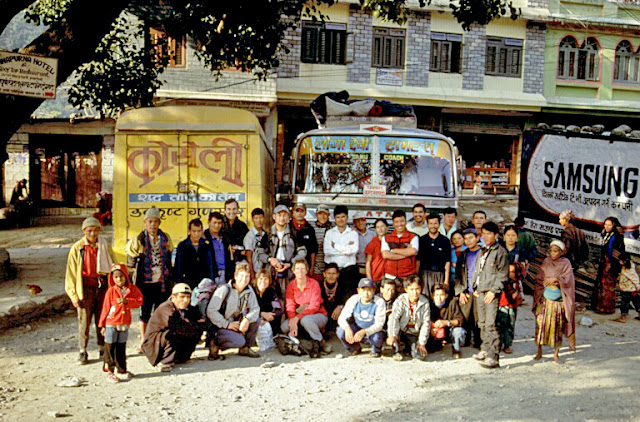 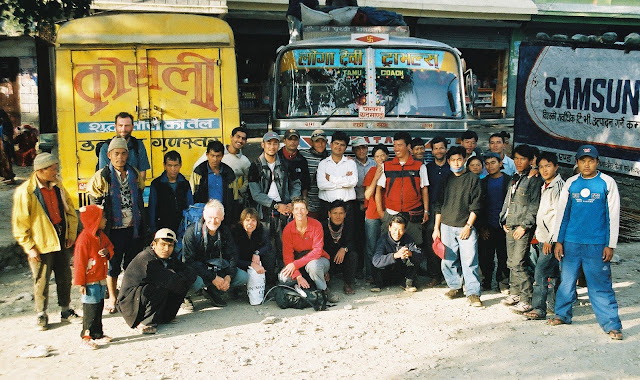 Then we joined a tarmac road at Baglung. 8:45 start from Beni to ~11am pee stop, then a photo stop for views of 1 and Machhapuchhare from an 1800 metre pass high up near Khare. Then we gradually descended into the more populated area around Pokhara. There had been superb views down the Kaligandiki until we left it at Kusma, and there were increasing amounts of cultivated terraces, rising high up the mountainsides. 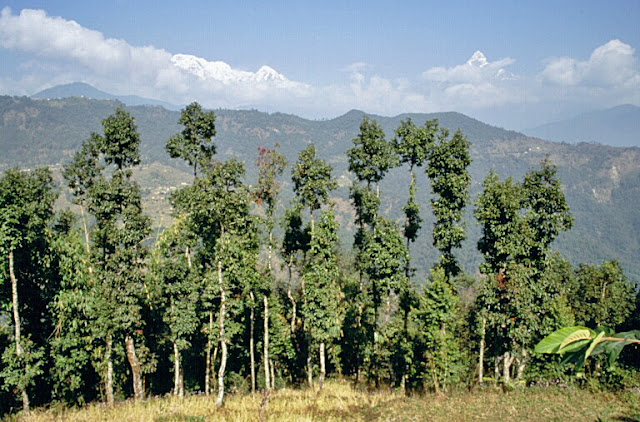 The Annapurnas and Machhapuchhere from the road to Pokhara Fishtail (Machhapuchhere) from the road to Pokhara

We passed through various police/army checkpoints and later discovered that someone was murdered today in Pokhara. (Probably people were also murdered in and , but not high-ranking officials, as here.)

So by 1 pm we had arrived at Shangri-La Village Hotel**** to the south of Pokhara, and were soon installed in rooms with a bit more character than those of the Radisson in . It was a hard goodbye to Mahesh and Deepak, and Hosta and Nebraj - and finally a friendly wave to/from the rest of the crew, who are continuing on the bus back to Sanjeev's house in Kathmandu, their next task being to clean, mend, maintain, etc, all the equipment taken. Quite a task.

Andrew, Mark and Sanjeev stayed at the hotel for lunch whilst the rest of us took a taxi to Boomerang restaurant at Lakeside, where we enjoyed a leisurely lunch in the shade and watched boaters on the lake, and women washing clothes, beyond the restaurant's green lawns.

Unfortunately it was quite hazy so there were only occasional brief glimpses of the high mountains beyond the nearby wooded hills.

We walked back to the hotel (half an hour) partly beside a canal, passing stores selling clothing, books, etc, and men offering me a shave. We bought a poster and a cookbook.

Then a few hours' R&R before meeting with Sanjeev for a good buffet meal at the hotel. By 10 pm we were all (except maybe Sanjeev) ready for bed and we adjourned for a good night's sleep in real beds.