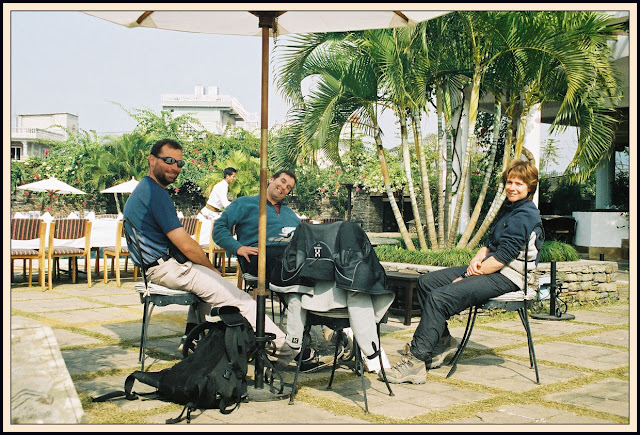 Leisure time outside the Shangrila Village Hotel in Pokhara

Saturday 20 November
Pokhara to Itinerary: DAY 20 Fly to Kathmandu We take the 30 minute flight to (leaving Pokhara at 09:55 hrs) and transfer to hotel. 2 nights The Malla Hotel on bed and breakfast.

[Diarist: Sue]
A misty morning in Pokhara meant that we faced a delayed flight, but in this lovely spot it was not a problem. After a later-than-normal breakfast, we loitered around the hotel reception reading. When the sun came out we slowly migrated outside, where some sort of view materialised. A hazy Machupuchare and Annapurna South were visible.

After some nice fresh coffee, we headed for the airport. Our 10:45 'Yeti Air' flight eventually took off around 1pm ish. A seat on the left side meant that views were memorable [for Sue, I was on the right - Ed] all the way back to . The Himalayas were stretching as far as the eye could see during the twenty minute flight to . 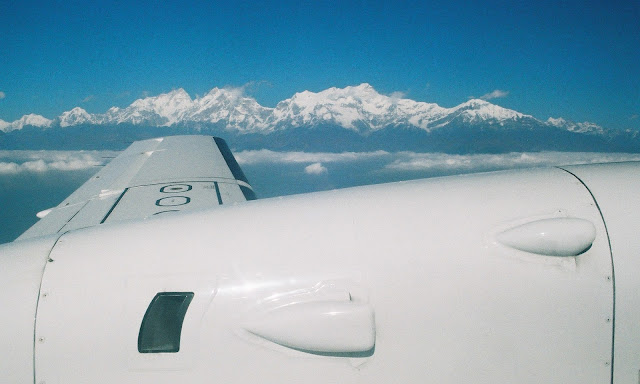 The afternoon was spent around the Radisson Hotel - I used the sauna and jacuzzi, others used the gym.

We treated Sanjeev and Shirish to a meal out - originally planned for the 'Yak and Yeti' hotel, but it was fully booked. Instead, we had a lovely meal at the '' restaurant, an excellent Indian restaurant. The size of the naan bread was amazing - enough for eight! We enjoyed three bottles of an Australian Shiraz-Cabernet before returning by minibus.