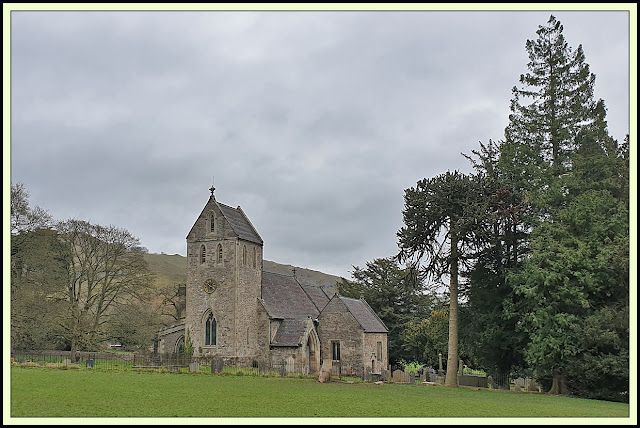 This was Sue and Phil's 25th wedding anniversary weekend at Ilam Hall, attended by well over 100 of their friends and relatives.
On Saturday morning a sizeable party left the hall, in view of the church that lies within the grounds - pictured above - at around 9.30. Just as Richard and I were finishing our 5 km jog in Derby.
We hastened back to base, and whilst Richard then enjoyed a leisurely day, I shot off to catch up with those who had set out an hour earlier. I was called back by Phil - one of his bellringing fraternity had arrived late and wanted a longish walk.
So bellringer Brian and I set off to cross a tempting bridge from which the next picture, looking back up to the hall, was taken. 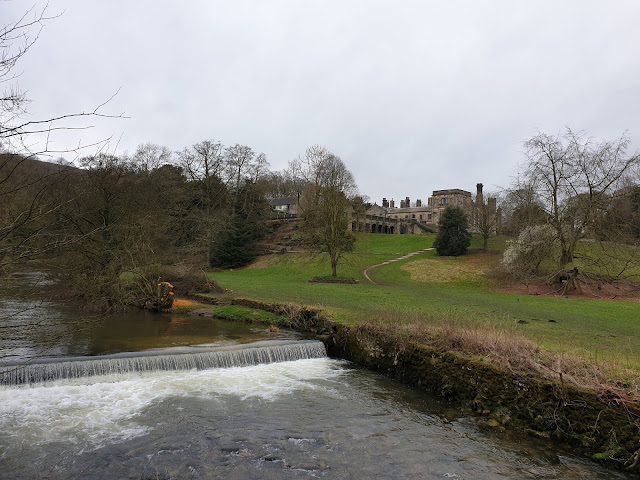 We soon realised we'd gone the wrong way. However, our brisk pace brought us to a point near Beeston Tor Farm, where the big group of 27 were sitting around with their flasks open. The drink was most welcome. I'm usually full of coffee by now, after a parkrun!
A rather more sedate pace prevailed for the rest of the day - much to Brian's relief.
The cycle track beside the River Manifold, following the course of an old railway line, led us from Weag's Bridge (below) to the turn to Wetton and Thor's Cave. 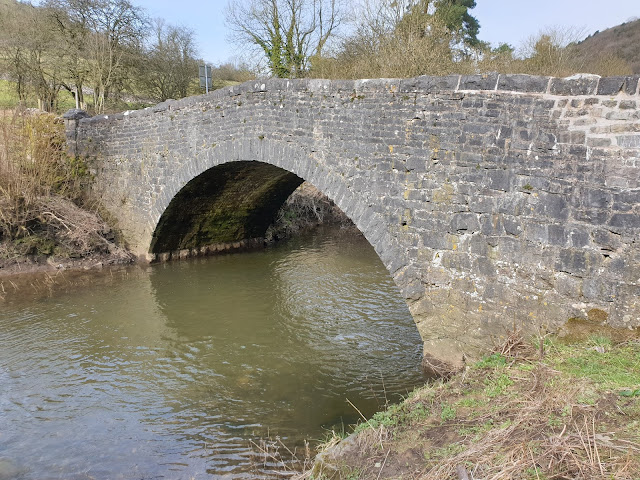 There's an information board about Thor's Cave, from where the massive cave is seen high above. 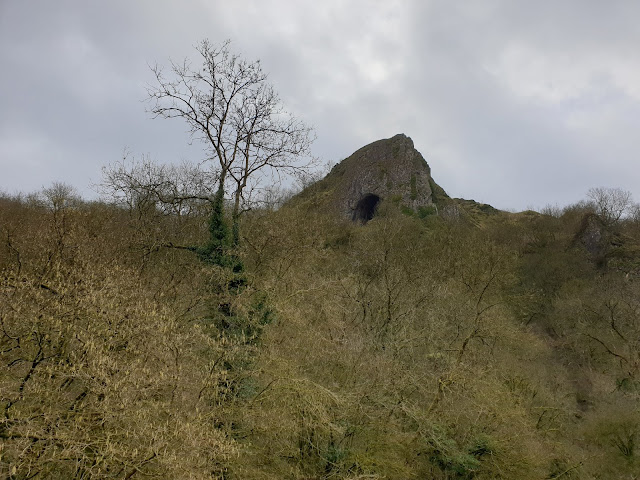 I've written about this spot after previous visits. This report provides more information, or you could just put 'Thor' into the search box on the top left of this blog - always a good way to find things I might have written about.

There were lots of people, in addition to our 27, about today, so most of us didn't bother to go into the steep, slippery, muddy cave. Been there, done that! 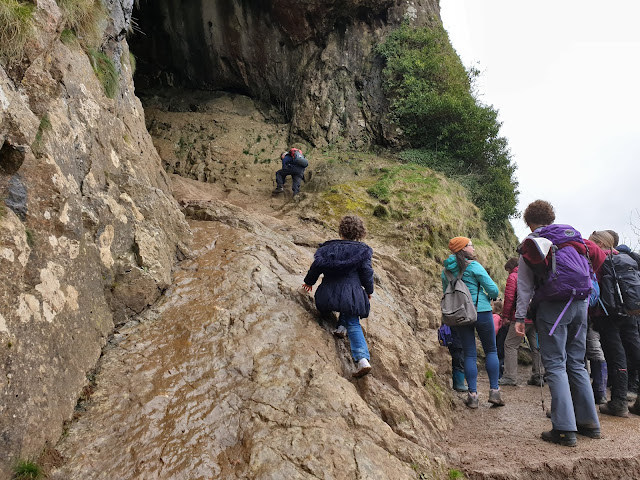 There's a fine view down to the Manifold Valley from the cave entrance. 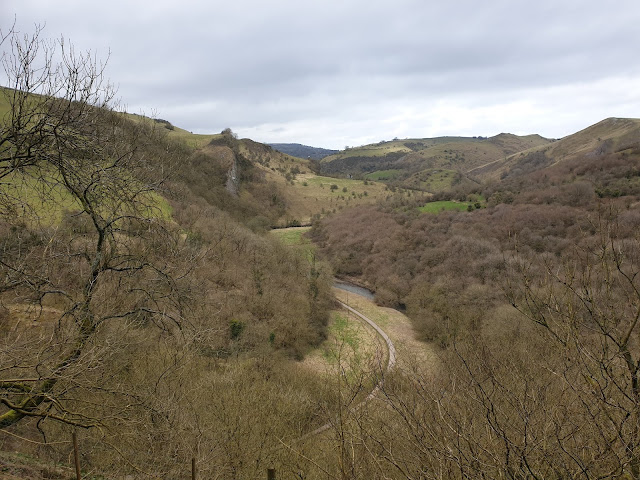 The Royal Oak in Wetton provided another most welcome rehydration opportunity, with the benches in the village centre offering a good spot to scoff some lunch - Thanks to Sue for the smoked salmon and cream cheese with cucumber buns. 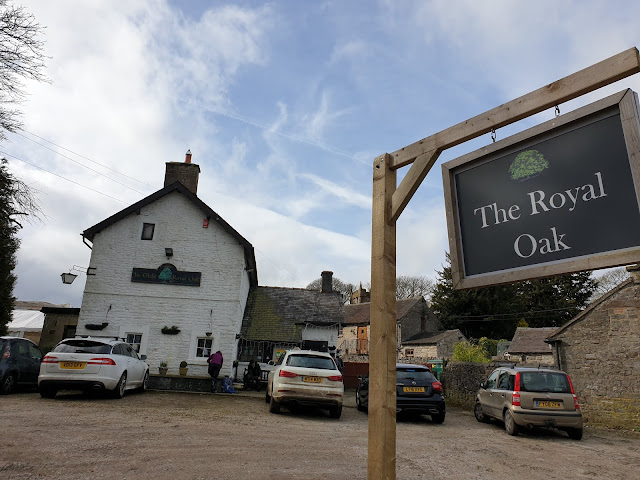 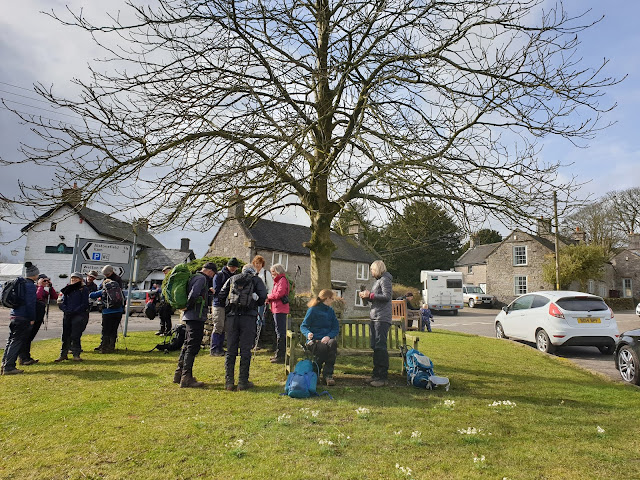 From Wetton, the path down Hall Dale brought us to Dove Dale, the pinnacles of Pickering Tor, and the much photographed Ilam Rock, on which there were no climbers today. 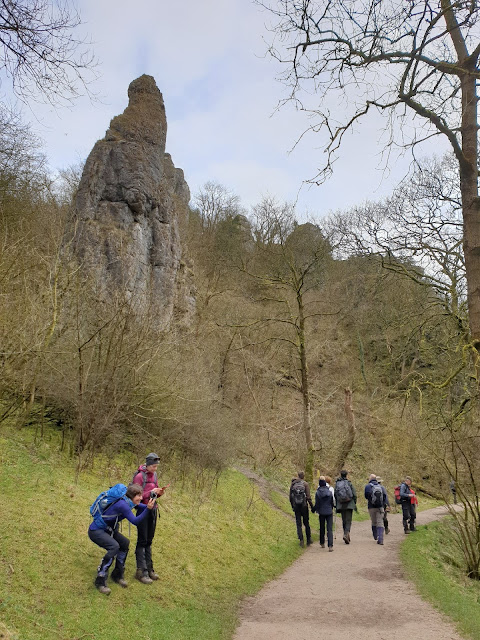 Ilam Rock would have been a very greasy climb today. 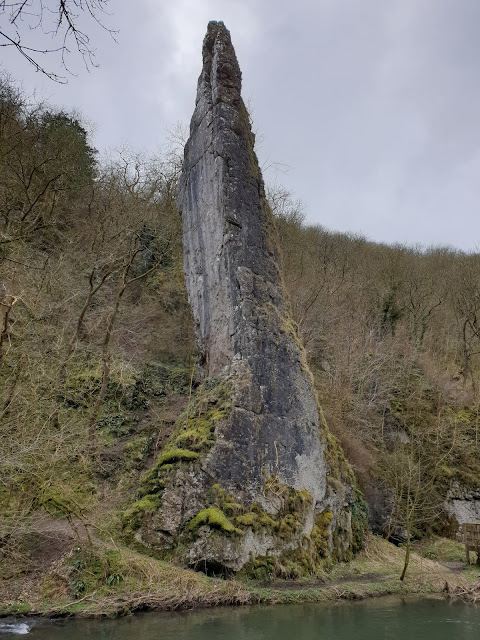 Dove Dale has clearly recently seen the River Dove at high levels, but there's no evidence of serious flooding. The duck boards seem to have stayed above the river level. 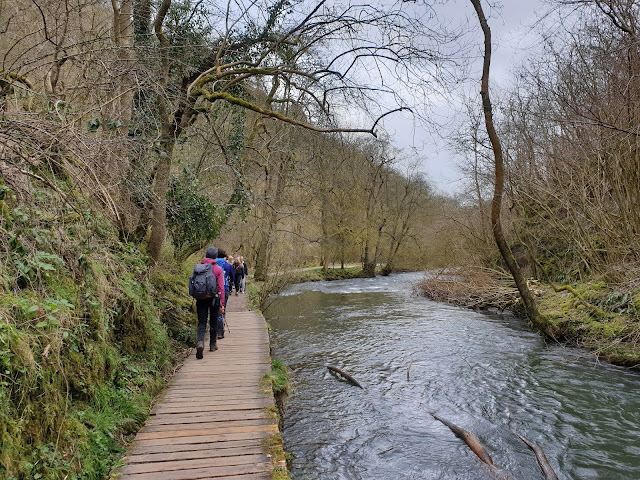 There's a rocky knoll near Lover's Leap and the Twelve Apostles, on which our motley crew finished off any edible contents of their bags and flasks before resuming the easy walk amongst grockles back to the Hall for tea and (lots of) cake. 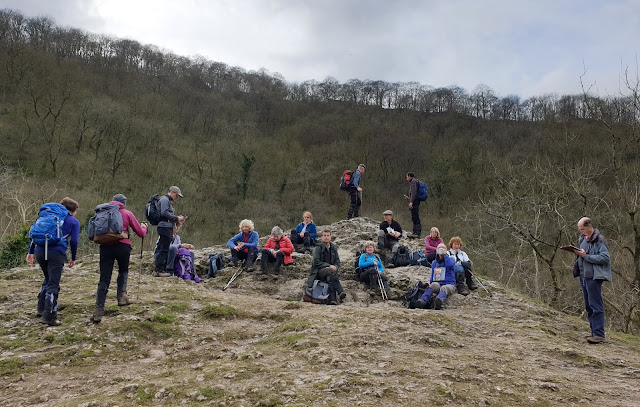 Anyone who had stayed mud free so far was to be disappointed as they trudged across a final field beyond Izaak Walton Hotel to Ilam. 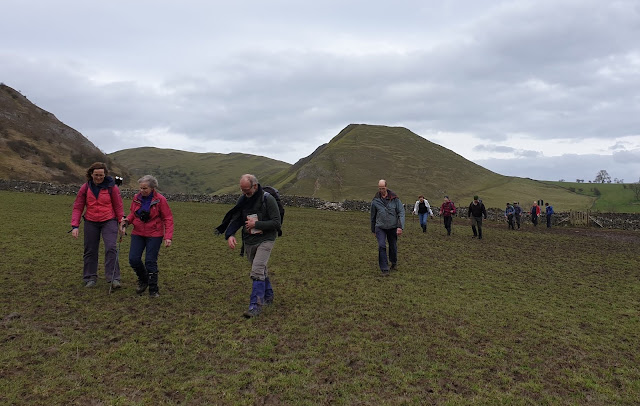 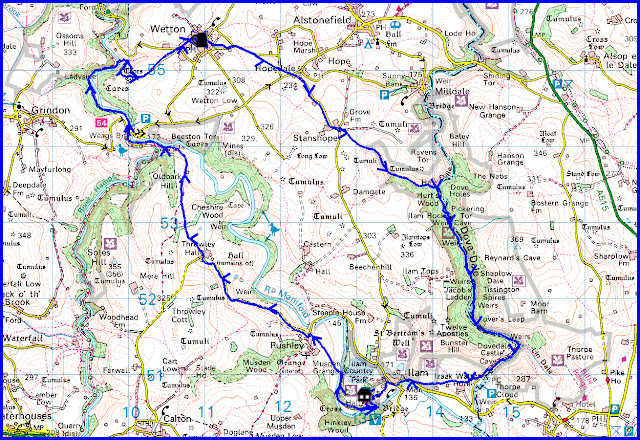 Later, about 110 guests enjoyed a lavish meal at Ilam Hall. Sue has lots more photos that she may broadcast separately. 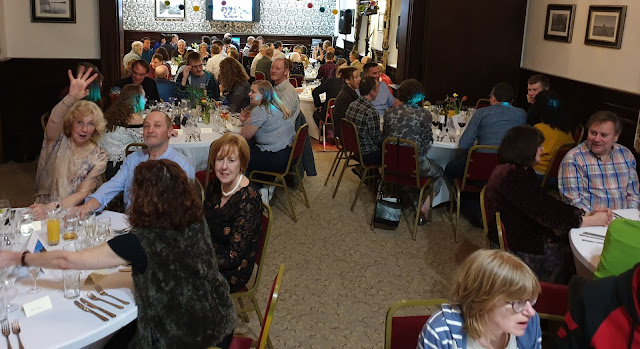 As usual on such events, many people went home on Sunday morning, so there were just 15 or so of us on a ramble from the Hall. 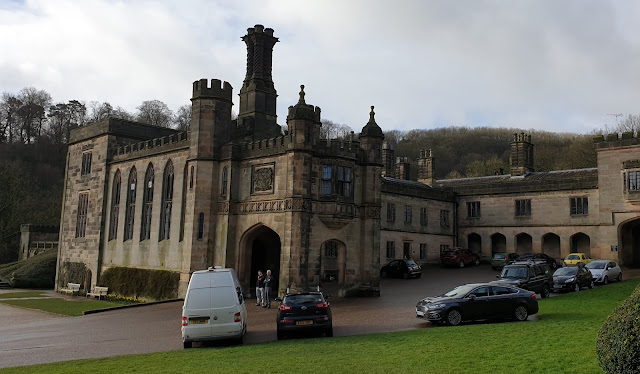 The views towards Thorpe Cloud and Dove Dale were illuminated by sunshine today, but after overnight rain everywhere was rather muddy. 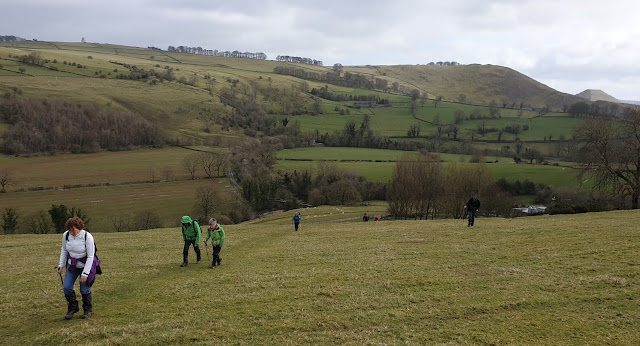 We went via Rushley then down a very muddy path to the River Hamps and the Manifold Way, lunching in a churned up field before heading up Soles Hollow. 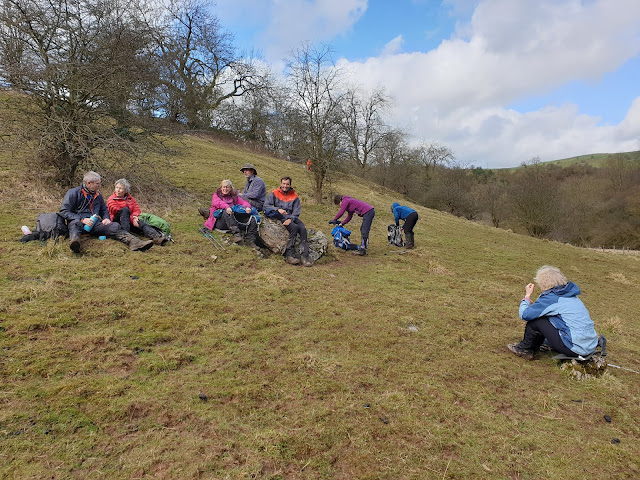 After crossing a minor road, our path led down a most pleasant valley through Musden Wood to Rushley. 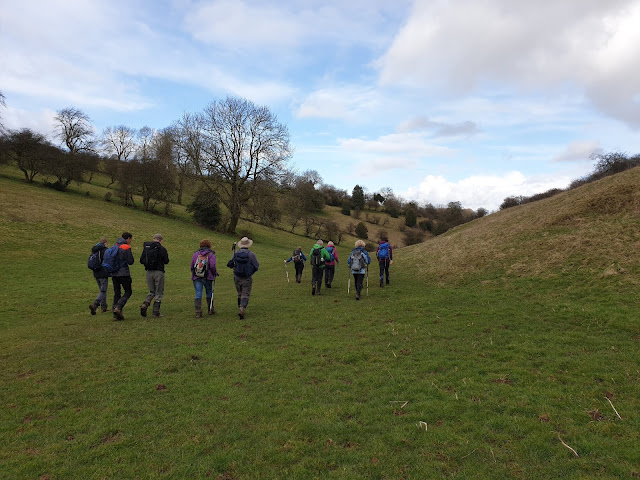 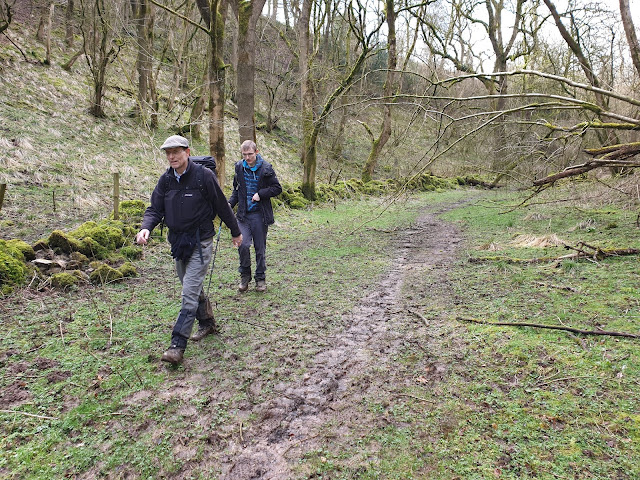 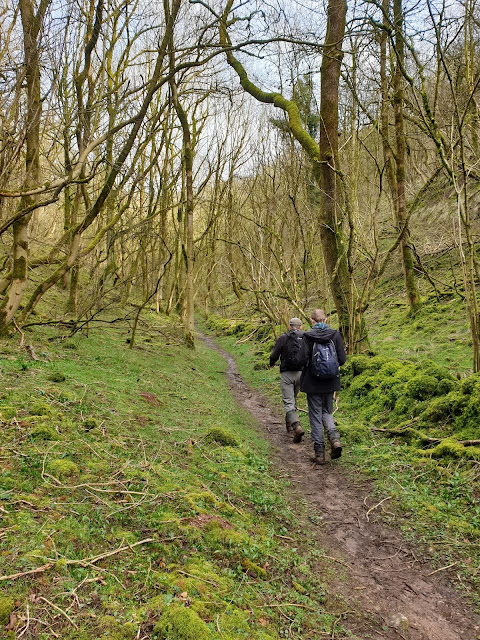 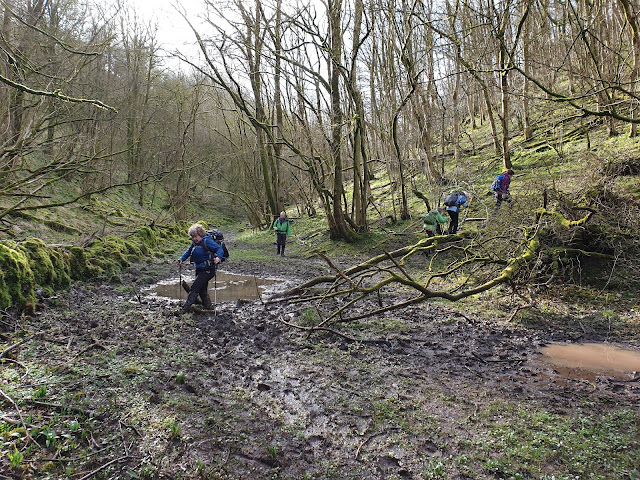 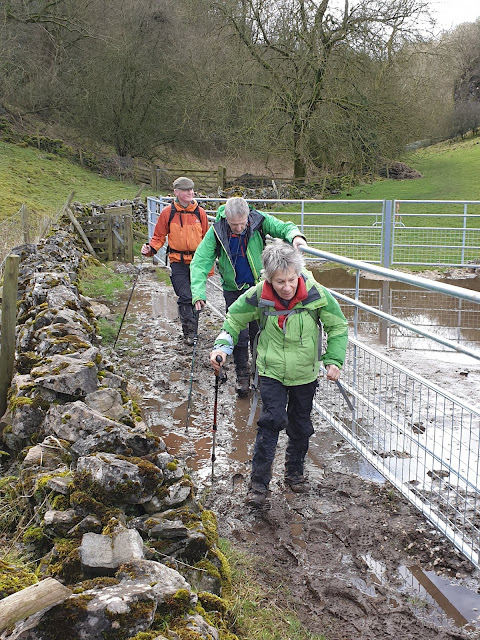 Then, by mid afternoon, we found ourselves back at the Hall, with just enough time to get to Morrisons in Buxton before its 4 pm closing time to purchase supplies for dinner. 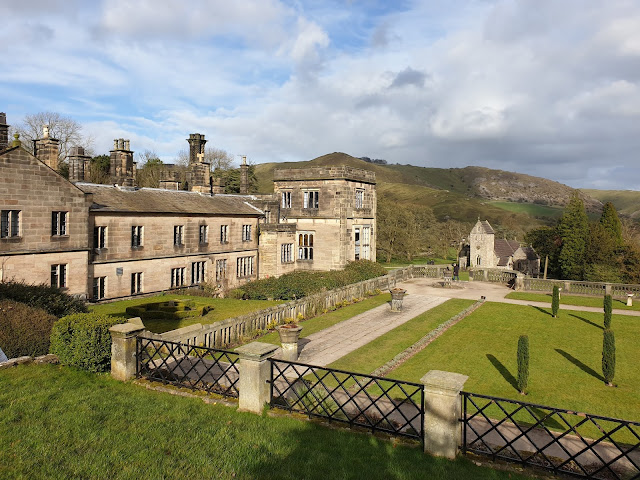 Here's our convoluted route - just 17 km today, with 480 metres ascent. Thanks go to Robin for planning both day's routes. 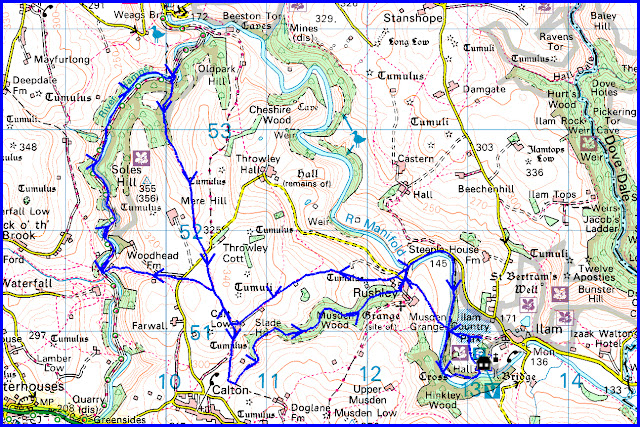 So, a most enjoyable weekend, away from the relentless news of the spread of Coronavirus, which at the time of writing is starting to threaten many of this year's plans.
Posted by Phreerunner at 22:36

A new word for me: grockles. Thanks.

It has connotations with a "muggle" as adopted by the Geocaching world. In that context some outsider threatening to see you revealing the seceret location of a cache. It has some relevance in the Harry Potter thing, something about which I know nothing.