Friday was another leisurely day, with a walk from Picton Harbour to Bob's Bay then to the harbour viewpoint, where we watched two ferries coming in along Queen Charlotte Sound. The Echo, an old sailing ship, now a cafe at the edge of the harbour, provided a nice coffee before we queued to board the Interislander ferry to Wellington.

Leaving at 1.15pm prompt, we watched the scenery from Deck 10, the sundeck, where the breeze was nicely cooling on a humid day. About half the journey is along the Sounds, with an hour in open sea, before entering Wellington harbour. The crossing was completely calm. The haze created a lovely halo around the sun. 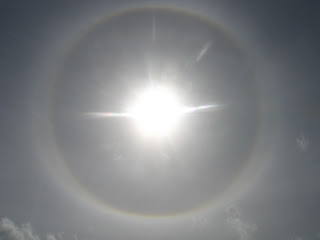 Moana Lodge is our base for exploring a tiny portion of what Wellington has to offer and is located about 25 minutes north of the city, in Plimmerton. The Edwardian house is now (another) top class backpackers hostel and looks over the beach to Mana Island and the South Island sounds. 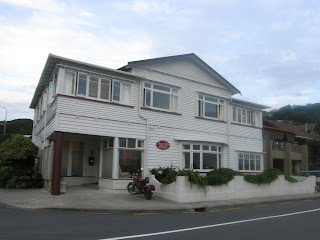 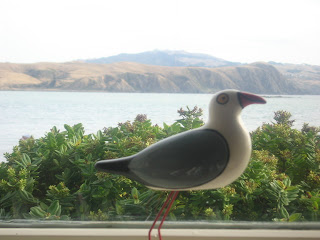 So, today saw us waste no time in getting into town (preferably to get a new windscreen but that failed) and our first port of call, the Botanic Gardens. Things were brightening up after rain last night, but this made the roses look particularly attractive, with pearls of water perched on their petals and reflecting the morning light. 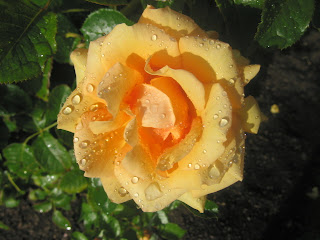 Highlights were the rose garden and the begonia house, but the sculptures were exciting in their own way and the native bush section was filled with the buzz of cicadas. Views over the city were good.

Te Papa, the museum, occupied the next few hours. Located on the waterfront, it has its own bush exibit outside, where there is even a small suspension bridge and cave! Inside, we were shaken in a house built to demonstrate the effects of earthquakes, and saw film of volcanic eruptions here in 1995-6 - quite large! Once our cultural brains were saturated, we walked along the sea front - Wellingtonians were on the beach and in the sea enjoying the hot sunshine, taking part in the Wellington bike ride, and paddling craft that were similar to Dragon boats across the harbour in a race as part of a regatta. 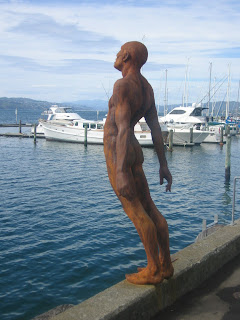 It was great to retreat back to Plimmerton and have a dip in the sea after a day in the city!
Posted by Nallo Lady at 07:34

Yes, but I have to admit to having cheated by buying some stuff that you smear all over yourself. I felt a bit like that poor woman in 'Goldfinger'!