It was just like the pictures! The sea was turquoise, the sky blue, the trees green and the sand golden. We did, indeed have good weather for this trip, which saw us kayak over three days from Totaranui in the North of the park, back to Marahau, in the South, visiting golden beaches for gourmet lunches, and camping behind the beaches amongst shady trees, where, thankfully, the sandfly population was considerably smaller than that in Doubtful Sound! 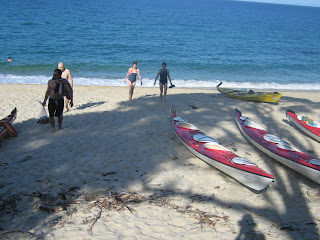 Kayaking itself was reasonably hard work, although we were only paddling for around 4 hours a day. Martin, in the front, was more uncomfortable than me, in the back, due to the waves entering the kayak when we launched it from the beach, which resulted in him sitting in a wet seat for hours. This was compounded by his spray deck not fitting ideally, which let in more water!
But, for me, being on the water was lovely, particularly as swimming was never far away! We swam at our first camp, Tonga Quarry, where the water was cold and the beach shelved steeply, then at Anchorage Bay, a broad, sweep of golden beach (littered with kayaks!), where pockets of warm water made it really good, and a rock was well-placed for a bit of diving! 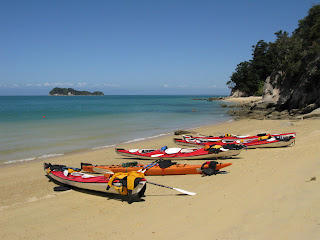 Twice we rafted up (parallel kayaks all holding on to each other) and got out the large orange sail, which very effectively propelled the raft through the water, without the hard work of paddling.
Tumbling fur seals, shags and Australian gannets that occupied the coast and its islands and were seen from very close quarters, although we were sharing the water with numerous kayaks, aqua taxis, yachts and larger, sight-seeing boats. Our guide, KP, who is half-Maori, in addition to being a fine chef, picked plants and berries that were edible or medicinal, and pointed out Maori Pa sites, parts of the forested coast that used to be farms, or orchards, and made other historical points.
Our companions were Robin and Mary-Jo from Idaho, Stefan from Stuttgard, Craig from Auckland (originally from SA), and for the third day, Karen and Joe, from Helensville, north of Auckland. It was a good team - thanks for the great chocolate cinnamon bananas Karen! Toasting marshmallows on sticks in the fire at our camp at Anchorage Bay and star-gazing made for a good activity on the second night.
Post-kayaking we tested the green-lipped mussels in Havelock, the 'green-lipped mussel capital of the world' - magic!
This morning, in the tranquillity of Tombstone Packpackers (yes, really - and the linen is black), we are taking life gently, and will test our legs out again later in the delightful area of Queen Charlotte Sound.
Posted by Nallo Lady at 20:17