THIS IS NALLO LADY'S POSTING FOR 18 APRIL

This was a big day for Dave, Paul, Pam and me – Beinn Eighe, after Martin’s frittata for breakfast.
It was another lovely morning, although the wind was brisk and cold. There was a good rising path from the plantation near Loch Bharranch. 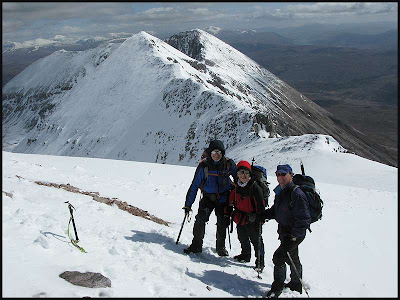 The final snowy section (above) up to the first summit was hard work, with axes employed despite the soft snow, due to the steepness of the slope. Elevenses of tea and caramel shortbread had been just in time!

The snow was good up to and beyond the Munro summit of Spidean Coire nan Clach, where Pam and Paul are pictured below, and the ridge ahead, with Liathach as a backdrop, was beautiful. 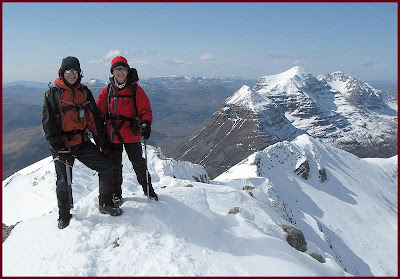 The ridge was narrow but felt safe – we were all high as kites with the blue sky and stunning views.

Lunch was on a snow-free, south facing slope with a grandstand view of Liathach, always bathed in sun. Clouds from the east evaporated as they passed overhead. 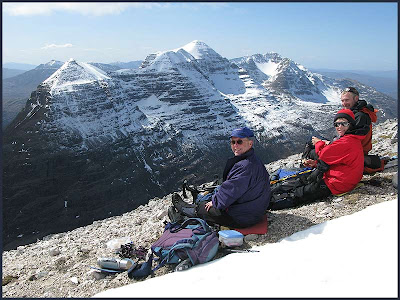 There was another stiff pull up to the point where another narrow ridge heads off to the main summit of this mountain, Ruadh-stac Mòr. The wind now increased in earnest, spindrift filling the air. The chill wind bit into our faces and strengthened as we approached the summit. Care and strength were needed to stay upright. Dave and I reached the summit and waited….and waited…
Meanwhile Pam and Paul were hunkered down in the snow on the final approach, as Pam had nearly blown away! Here they are, just after staggering to their feet after their long 'hunker'. 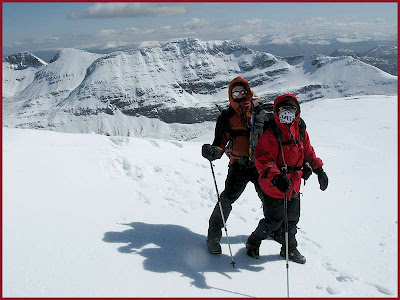 A team effort got us all back up to the summit.

On the descent we encountered others nearing the final haul to the summit. We recommended approaching from the leeward side! Here we are, descending to the right of our upward route. 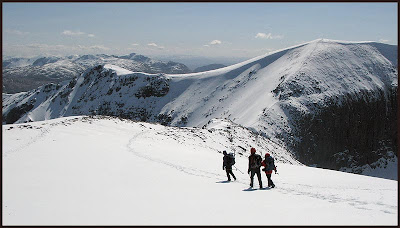 The next obstacle was the gully into Coire Mhic Fhearchair. Although the snow was mostly soft there were a couple of tricky sections where it was shallow, steep and icy. …Steep, but enjoyable once the difficulties were over. 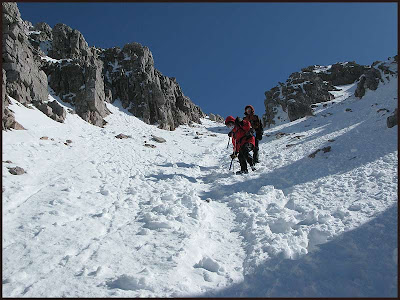 After this we descended gradually to the clear lochan, where the breeze was still stiff. Stepping stones made easy work of crossing the outflow, then a good path traversed the hillside, descending gradually. The northern flanks of Liathach again revealed themselves, covered in snow.
We saw several more folk after a break for afternoon tea by some waterfalls, before completing the final 5-6 km in a cold headwind that persisted all the way back to the car.

What an epic day on which to conclude a wonderful week! 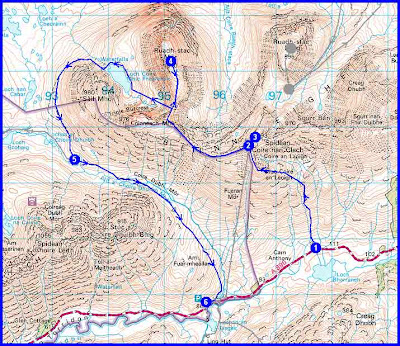