Today Notchy and I enjoyed the walk from the Ling Hut car park along the much improved Coire Mhic Nobuil path around the 'back' of Liathach. 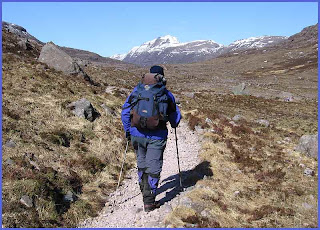 A strong, bitter easterly wind had discouraged us from going higher, despite the clear blue sky above. Having normally done this walk in the rain, I found it a pleasure to have such fine conditions. The four and a half hours it took to reach the car park below Beinn Alligin passed all too quickly.

The scenery reminded us of the Annapurna Circuit; only the scale was different!

We started with a number of folk who may have been going up Beinn Eighe, but were more likely just walking up to Loch Coire Mhic Fhearchair for a gander at the snow clad triple buttresses. We met two cyclists battling against the headwind. They had chosen the wrong direction, and given the boggy terrain in the middle section of today's route, perhaps an inadvisable cycle track. It didn't look hugely enjoyable. We weren't sure whether they should be here at all, but they seemed harmless enough.

This is our lunchtime view towards Beinn Dearg and Beinn Alligin (the shot left to magnificent, Annapurna-like, Liathach was directly into the sun). 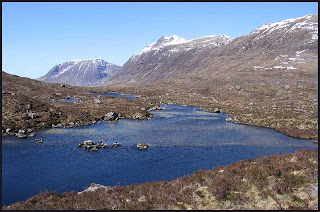 And here is the village of Torridon, passed through on our way back to Annat. 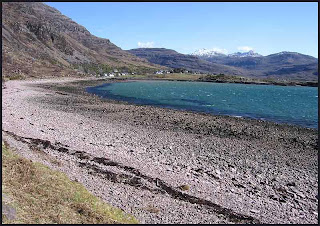 Meanwhile the others bravely headed up Beinn Eighe via Coire an Laoigh, for a fabulous if at times stressful (Nallo Lady may report later) day on that mountain, visiting both Munro summits and descending via Loch Coire Mhic Fhearcheir. They were elated after that, and appeared relieved to have survived after being pinned down by wind on the ridge and accelerated by ice on the steep descent into the Coire.
I recall a day up here with Nick and Johnny, when it wasn't so windy but Johnny's rope was used to rescue someone who had fallen, and the air was thick with feathers from the poor man's ripped jacket. When was that, Nick?

Nick replies:
Thanks for reminding me once again of the exciting trip we had to Beinn Eighe all those years ago. It was a week which also saw Johnny and I climb up an interesting gully between the 'horns' of Beinn Alligin. I also recall a walk we did more recently when we enjoyed a scree run almost all the way down to the deer fence, it seemed. Was that the same day we sat with some of the Aberdeen guys in a precarious position on the ridge in the mist? And I have a photo of one of the wheels of the wrecked WWII plane somewhere.
Anyway, we reckon the 'rescue' was about 1983 or 84 based on where Johnny remembers he was working at the time. I guess that means we must have travelled up from London together.

Thanks Nick - I may be able to track down some notes and do a 'retrospective' on this!

The route Notchy and I took today is shown below - 19 km and 500 metres ascent. 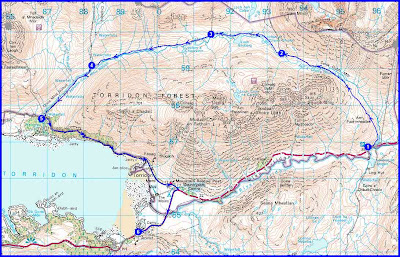