Flinging the blinds open to a bright sunny day after overnight showers, we were energised into a 9-o-clock start up Beinn Alligin. Here's the view from outside Annat Lodge. 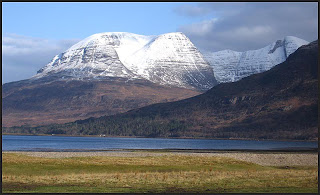 All apart from Notchy, that is. He set off on a 24km circumnavigation of Beinn Damh.
Beinn Alligin is a favourite hill of mine.
Familiar Ground.
Today we ascended into Coir' nan Laogh rather than start over the Horns. Above 600 metres it was a simple snow plod up the coire to the summit. 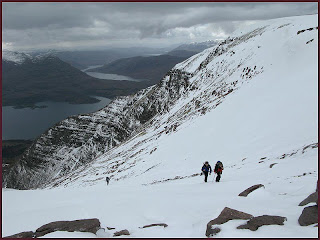 Fabulous views greeted us - back to Liathach and Beinn Eighe and the rest of the Torridon peaks. 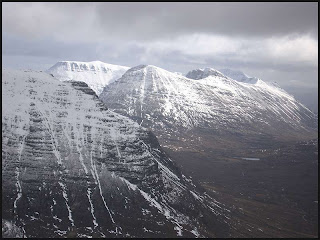 Only now did we need a windproof shell on this fine, calm day.
There was nobody else on the hill - we have now spent two days walking without seeing another soul.
After a slightly tricky descent down terraces covered with unstable snow, we rose easily past the spectacular Eag Dubh cleft to the even more splendid viewpoint at 986 metres - Sgurr Mhor, with a fine view to the Horns, with Beinn Dearg beyond. 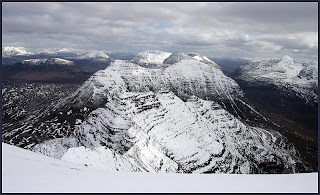 Snow clad peaks were arrayed in all directions, from the Cuillins of Skye to Eastern summits, with the Fisherfield Forest and An Teallach prominent to the North. 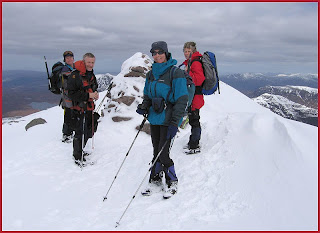 None of us fancied the scramble over the Horns of Alligin - given the looseness of the snow on the rocks, so we descended a huge snow slope into An Reidh-choire for lunch.
As we descended, snowballs raced each other ahead of us. Later these were joined by the top of Paul's flask.
I tried to glissade but just got wet trousers.
Our descent around the back of the mountain to the road was uneventful aside from a wet crawl under a deer fence to reach the road.
It was a lovely afternoon, and only 4pm, the reason Dave gave for walking the 4 miles back to the lodge. Or was he scared of Paul's driving? 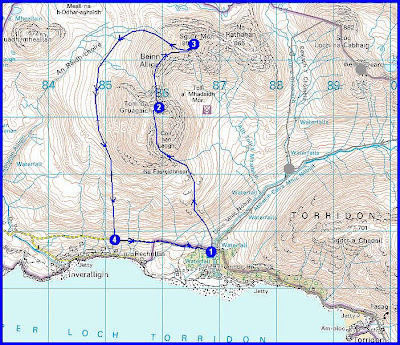