More overnight snow above 500 metres gave the hills a shiny fresh look as we drove to Kinlochewe.
Five of us headed up the well graded 'Pony Track' towards two outlying Corbetts in the Beinn Eighe massif, whilst Notchy found his own route from further up the road.

Here we are with our first objective, Meall a' Ghiubhais (886m), which gradually grew in stature as we approached.

The Beinn Eighe range opened out, much higher, in the other direction. Sunglasses were essential to counter the blindingly bright yellow orb. Cameras were constantly out to record the thrilling scenery on this fantastic wintry day. Those on our Christmas Card List may see something like this in December... Steps were kicked by Sue (again - the rest of us are pensioners)! 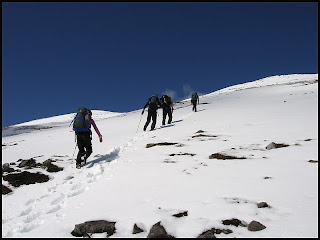 These led us to the first summit for more excellent vistas, with Loch Maree and Slioch now also in view. 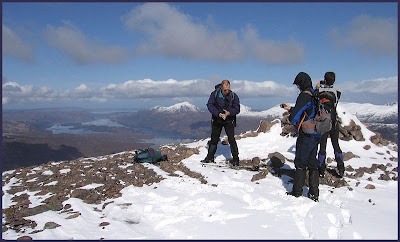 A lone woman had just tramped past, curiously not bothering to either stop and admire the views, or visit the true summit, some 10 minutes to the west of us. Here we are at that summit, with the Beinn Eighe range stretched before us. Our next objective, Ruadh-stac Beag, is in the foreground above Paul's head. 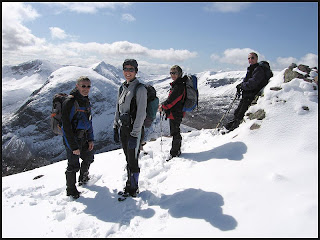 On descent we met Notchy, and another couple of people on this fine hill in winter conditions (it may be rather boring in summer!).

After lunch we headed up our second Corbett of the day, Ruadh-stac Beag (896m). I followed the recommended route beside a burn, past this pretty waterfall. 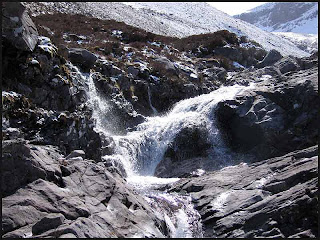 Dave for some reason led the others directly upwards towards impenetrable crags. My shouts and arrows in the snow failed to dissuade them from their doomed quest for the summit. Meanwhile I continued to the col, then endured a 30 minute thrutch through deep, soft, sugary snow up the steep climb to the deserted summit.

Meanwhile the others gave up their bid to penetrate the crags, Pam and Paul went down, whilst Sue and Dave retraced to pick up my prints and chase me to the summit. I encountered them as I descended steeply through the sugar. Here's Dave descending from the summit, still in 'chase mode', with Beinn Eighe behind. 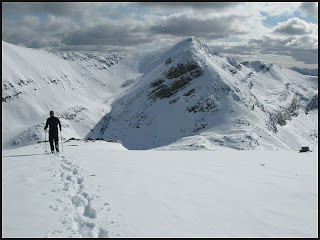 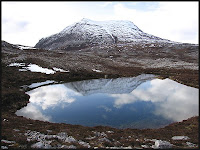 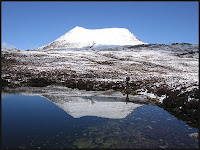 On the way down I rejoined the Pony Track by the small lochan from where, earlier, we had enjoyed dramatic snowy vistas. The shot on the right shows just how much of today's fresh snow had melted since we passed earlier. The April sunshine had certainly had a big effect today.

Pam and Paul, the Pacific Ramblers, had returned to the car, where all five of us reconvened at 6.15 after another superb day out.

Dave's carbonara, the manufacture of which we think featured telepathic communications with Pat, rounded the day off!

Today's route, for the three of us who did it, was roughly as shown below - about 18 km with 1400 metres of ascent: 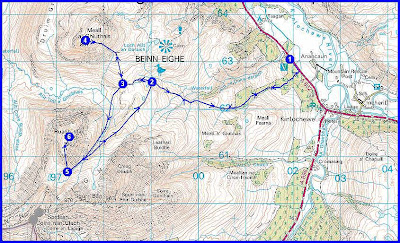