An early morning peek behind the blinds revealed a cloudless sky - so no rest for the tired legs today! 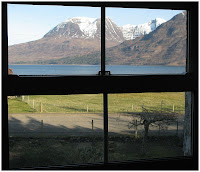 Whilst Notchy went to explore the Diabeg coastline and the Pacific Ramblers donned shorts for a perambulation around Beinn Damh, Dave, Sue and I daubed ourselves with suntan cream and tried to re-energise our muscles on the walk in to Slioch from Incheril.
A lovely gentle stroll in hot sunshine took us beside the Kinlochewe River.

Then we strolled briefly by Loch Maree - where we heard our first cuckoo of the year - to a new bridge across the river from Gleann Bianasdail.
Once across this bridge, the ascent starts - on a nicely graded path that soon heads up towards Coire na Sleaghaich. We lingered beside the river, admiring strenuous waterfalls.
A man in a kilt and two others passed nearby, on their way up Sgurr Dubh. We didn't see them, or anyone else, again. 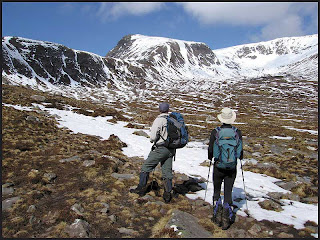 Up in the coire above 600 metres the boggy surface became covered in sugary snow, making progress slow. The steep ascent at the head of the coire (above and slightly right of Sue's head in the photo) required much effort, but once up that it was an easy snow trudge to the twin summits of Slioch (980 metres). It had taken 4 hours and 20 minutes.

Here's a view from the summit. 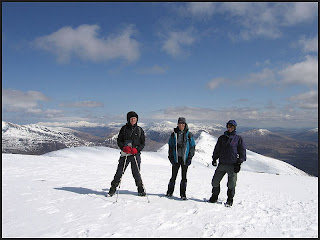 And here Dave and Sue are returning to the main summit from the northern summit. 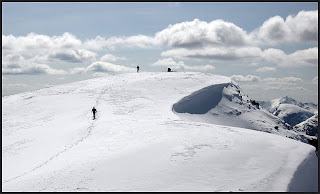 The conditions were superb, with clear views in all directions. But it was cool - minus 20C with windchill.

We considered traversing the ridge to the east, but it sharpened and had lots of spindrift from the icy wind. So a quick descent through steep sugary snow back into the coire for a late lunch on a warm rock was followed by a beautiful walk back on this lovely sunny day that has given some of us very red faces.

We saw many deer today, including this small herd of females who had their patch beside the path and were jolly well not going to move, however close we got! 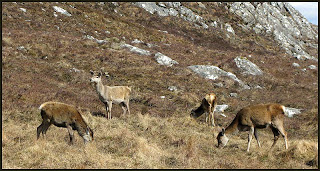 We also saw goats and herons and much more; back in Annat our first house martins of the year were flitting about, together with the ubiquitous oyster catchers (they weren't actually 'flitting'!). Loch Torridon also sported sightings of curlew, common sandpiper, greenshank, and many more no doubt - but we have no 'birders' with us this week.
Our home for the week, Annat Lodge, looked magnificent in the evening sun with its backdrop of a blue sky and a nearly full moon. 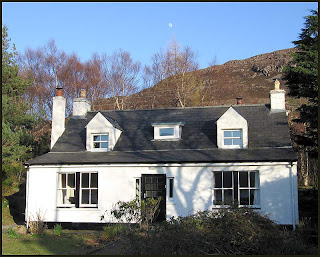 It just doesn't come better than this! 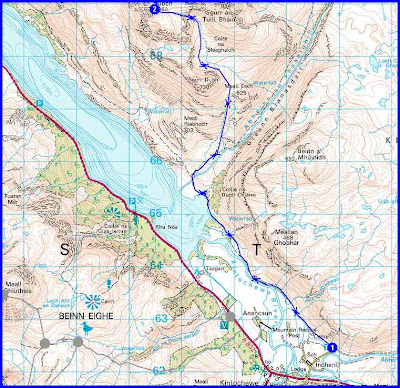 "cool"? we call -20C with windchill mild here in Ottawa. I've been skiing at -50C. Otherwise, I'm jealous. It's been 30 years since I've been up "The Spear" and the weather then was bloody awful.