Bacon butties and an ample breakfast fuelled us for an easy first day in good but showery weather.
The six of us set off past the Ling Hut in as good spirits as the very friendly dog we met there. 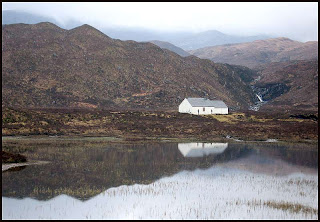 The next 3 km along the stalkers path up Coire a Cheud-Chnoic was a delight.
The showers eased and 5 of us continued easily to the Corbett summit - Sgorr nan Lochan Uaine (871m), whilst Notchy meandered around to the north ridge to which the rest of us descended to meet him for lunch. 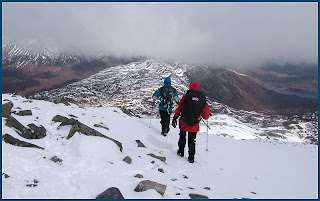 Notchy then headed down to Coulin Lodge - he had bog and route finding problems later on - whilst the rest of us continued up Sgurr Dubh (782m) where we enjoyed expansive views over the Torridon area. 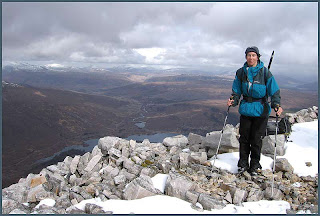 Sadly the snow above 500m was too soft to require our axes and crampons.
WNW took us past a cliff to descend easily to regain the stalkers path below Ling Hut and get back to the car by 4pm after being out for over 6 hours.
We then rescued Notchy who was enjoying an amble along the road after his adventure with a tricky 'log and wire' bridge over a river.
From the cottage we enjoyed fine views as the Munro tops of Alligin and Liathach (below) cleared. 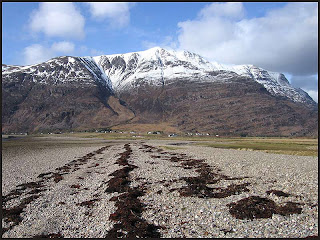 Moroccan chicken from the Pacific Ramblers rounded off a superb day, though apart from the continuing onset of 'Hypochondriac Dave's' Alzheimer's impersonations, there were no significant incidents.
Today's route, for all apart from Notchy, is shown below:
12 km, 1100 metres ascent. 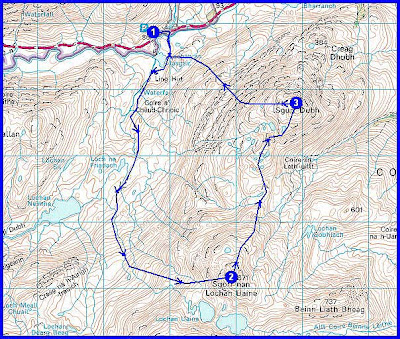