Actual: 27km, 758 metres ascent
As planned, with a small variation at Dalbog
Time 7 hours 35 mins including 40 mins stops.
No of Challengers seen on the walk: the back of one walking into NWB 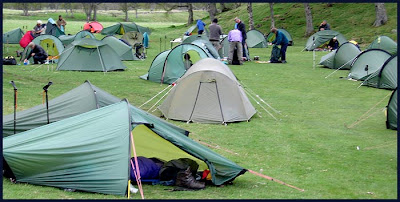 Having waved off the self-confessed Lazy Austrian who had spent most of yesterday asleep at Tarfside, we set off at 8.50 from St Dronstan's, duly fortified by their tea and bacon butties.
Is this Tarfside, or Fartside!? 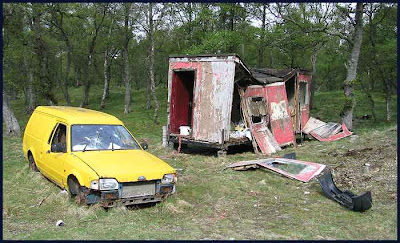 We reflected on the amazing Roger Boston with whom we had breakfasted. His knees are allegedly shot but he has managed to summit 43 Munros and 1 Corbett.
Well done, Roger, it sounds like you had a great route.

We brought our own tally to 20 today. The Hill of Wirren tops out at only 678 metres but was hard work, with tired legs and a cold east wind adding to the difficulty of rough ground beyond the Clash of Wirren.

The white rumps of the resident wheatears beckoned us on as the words of 'My Old Man', so enthusiastically rendered by Croydon last night, fluttered through our minds.

As in the Mount Battock area, a double electric fence dominated the broad ridge. The way to the summit trig point was thus barred, but I managed to reach it with a bit of 'ducking and diving'. 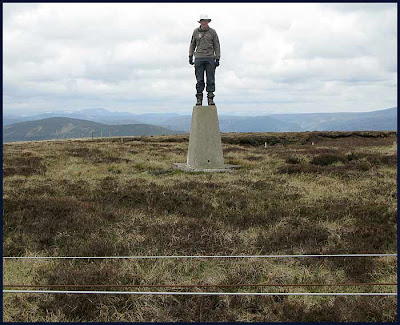 There were superb views to Lochnagar and Clachnaben, and lots of lovely white flowers with bright green leaves. Thanks go to Ann Thorn who identified the plant as cloudberry, so named as it is only found on high mountain areas. 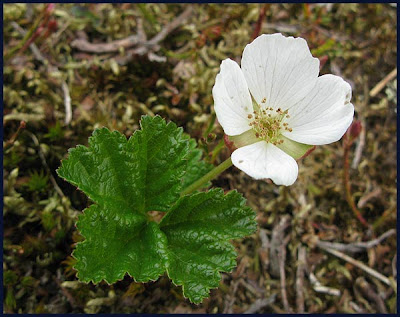 Peat had been left high and dry in places where the hillside had eroded away; this one even had a tunnel through it, and was difficult to scale due to an 'all round' overhang. 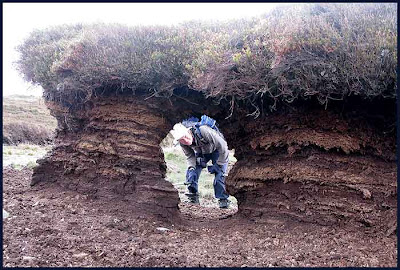 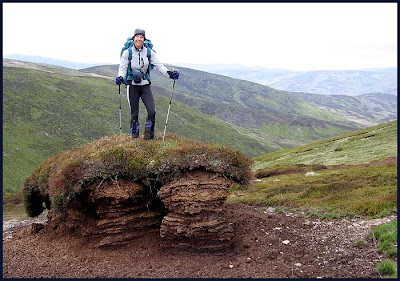 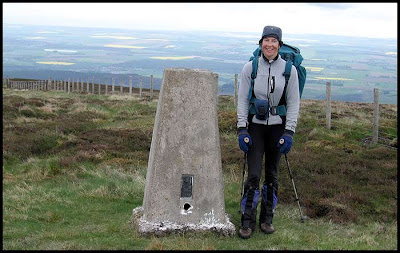 By the time we reached East Wirren and our final trig point we had fine sea views, with a foreground patchwork quilt of bright yellow, brown and green fields, intermingled with deep green woodland to feast the eye.

We saw no other Challengers up here, and for company we had the ubiquitous oyster catchers and lapwings, as well as curlew, buzzards and a very fat ferret amongst a multitude of rabbits.

Whilst we were very much enjoying being up high, today's biting wind dictated our shortest lunch stop yet, in a sheltered yet cool alcove on the descent to Dalbog. 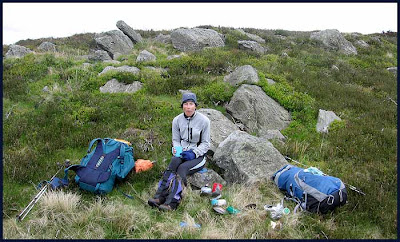 Lanes lined with gorse and broom led to tarmac after obscure stiles had guided us around secluded Cowiehill. Speedwells, bluebells and other lowland flowers lined the lanes as we walked on, now in crocs, to North Water Bridge. 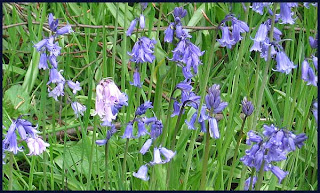 It was a long road through beautiful woods, but we didn't realise that we could have found a better route, with a tea shop, through Edzell. 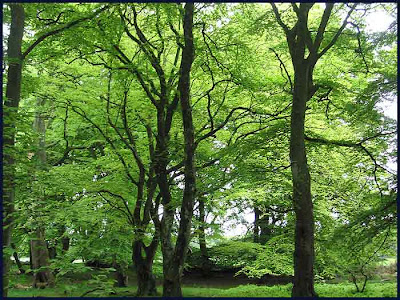 Yesterday we met Bill, who had got into the Challenge as 85th reserve. It just goes to show, if you want to do it every year you probably can, if you are prepared to wait for last minute withdrawals.

So here we are in this most sociable of places, with 18 km to go before our appointment with the east coast. 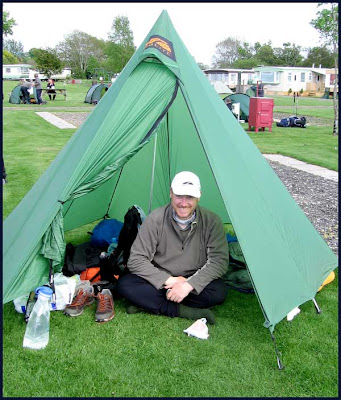 Many of us in this new tent city - having moved like gypsies (one pretending to be a blogger is pictured) from Tarfside today - will soon adjourn to the camp site TV room to watch the European Cup Final or, in some cases, simply to keep warm!

Next day: Day 14
Plan
Report
Back to Index