Actual: 29km, 1007 metres ascent
As planned, except for starting 6 km into today's route, and continuing for 9 km into tomorrow's route.
Time 9 hours 55 mins including 2 hours 20 mins stops.
No of new Challengers seen: 6
No of other Challengers seen: 1

Intermittent rain in the night didn't bother us. It had stopped by the time we rose, with a cloud ceiling of about 800 metres. 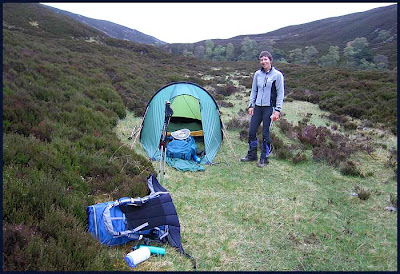 Tim and Kate had gone by the time we emerged, but we were away by 8.15, leaving the peaceful balcony camp to Derek and Pat.

The Feshie glen is lovely. By the time we reached the Eidart bridge, erected in 1957 by a REME infantry workshop, we had passed many more excellent camping spots, some showing signs of recent usage. 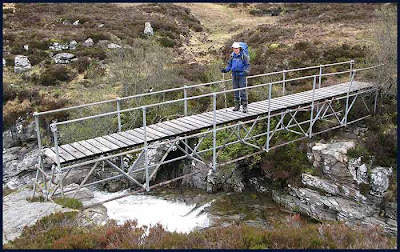 There we left the main drag to head south up pathless heather, interspersed with peat hags, towards the Munro summit of Carn an Fhidhleir. On the way we passed great clods of river bank that had been eroded away then washed high onto its grassy margins. 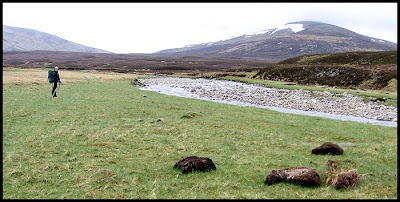 There were few birds around - just an occasional frightened grouse.

The tops were now clear of cloud. Lochnagar came into view, and Morrone, south of Braemar, festooned with aerials. We brewed up, and discovered that none of those aerials belongs to Orange.

At the summit, our chance meeting with Graham. 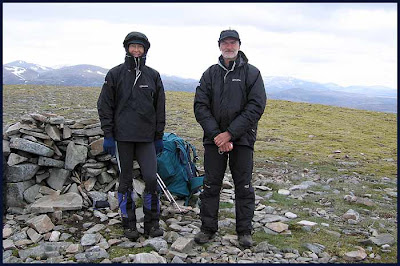 As on Mt Battock a year earlier we parted in opposite directions, but our paths do converge again in a few days' time. 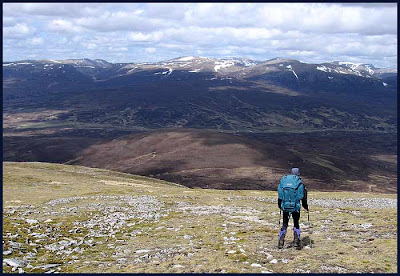 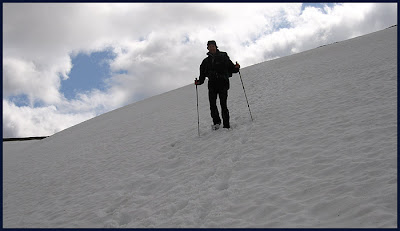 An Sgarsoch was reached and left with ease, despite a few snowfields, and it was a pleasant walk on a fine afternoon, to the ruins of Geldie Lodge. Beyond here was what we expected to be the crux of today's walk - the crossing of the Geldie Burn. 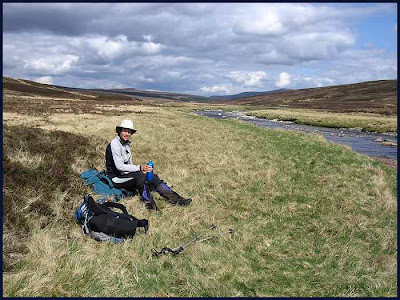 We thought we would have to don our crocs and wade across, but as you can see from the photo, the Geldie today was benign, and rather tame. 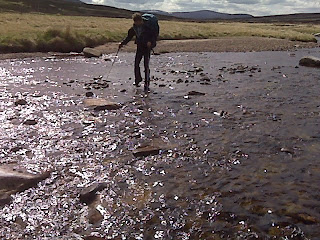 We had originally planned to stop hereabouts for the night, but the fleshpots of Braemar beckoned, so we decided to continue for a couple of hours, across more streams, to our present position beyond White Bridge, leaving Braemar just a morning's stroll away. 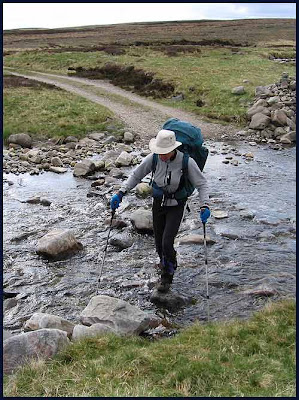 Having met only Graham all day we now encountered a few cycling Munro baggers, and a handful of Challengers, including a nice lady called Joy - she had upset 'The Dutchman' by camping where he wanted to by the Red House.

'Why should I move?' she said 'I was here first, it's on my route, and the place is the size of a football pitch'. We agreed she had a point (it was bigger than a football pitch) but The Dutchman's nose was well out of joint.

Then we encountered three Challengers struggling across the river, which in truth was not very deep.

In a secluded nook by White Bridge we found Tom Hume and his mate Gordon. They had found a great spot to camp; Tom had remembered it from 1987.

And on to our own spot, recommended by Heather T-S.
Derek and Pat were camped nearby, so we took care to pitch out of their sight, but we do share their stream, this being on of the few places around here that isn't reliant on river water.

I was pleased to receive a comment from Podcast Bob the other day. And yes, we will try to track down Dave and get him to do some 'turns'. The Americans he was with were finding the Challenge a 'breeze' and will be far ahead by now. I hope you enjoyed the Cape Wrath trail, Bob, though I know where you would prefer to be. It's ironic that your own podcasts may have attracted the entrants who you lost out to in the draw. That's life, I suppose.

The good weather hasn't really put much to the test, but:

The MSR Superfly stove's 3rd self igniter has broken! Shall I bother with another one? The stove keeps going out, but maybe just needs a good prick. A poke with the needle from the first aid kit seems to have done the trick for now.

The GoLite Quest rucksack is extremely comfy. But how durable is it, and how will it perform in the wet? Everyone I've met who has this sack likes it, whereas the lighter Pinnacle is not to everyone's taste in terms of comfort and storage compartments.

The Nallo tent is fine, but despite having wild camped in it for around 50 nights, including the HRP in the Pyrenees, it has never seen a proper storm. It does suffer from condensation - a nuisance when that makes the foot of the tent, and hence sleeping bag, damp. Two extra small guys at the tail of the tent would reduce that problem by keeping the outer, where the condensation forms, away from the inner tent.

'Gear of the Trip' is the pot cosy, which really does facilitate cooking without gas once your pan has boiled. Brilliant. Thanks Bob (I'll insert a link here when I get home.)

A close second is Sue's i-pod. Yes, second to a pot cosy!

Nearly setting fire to the tinder dry grass when burning used loo paper! Perhaps we should have 'bagged it out'.

Taking Rose's advice on strengthening the windshield....gaffer tape actually burns quite well itself, Rose. What a mess!

Finally a message for Notchy, who I know scans these pages:
Congratulations on getting up Ben More Assynt whilst we were fiddling around on Corrieyairack Hill. Hoping we have similar weather in a couple of weeks' time...

Next Day: Day 10
Plan
Report
Back to Index

I hope you both enjoyed the stay. I was in the trees just a click east on Friday night, so walked over the White Bridge twice on Saturday.