Actual: 20km, 468 metres ascent
As planned, except that we started 0.5 km along the route
Time 7 hours 15 mins including 2 hours 15 mins stops.
No of Challengers seen: 10 plus lots more at Tarfside

An easy day in fair weather. Very sociable as well.

We enjoyed a lie in and set off at 8.45, with other Challengers passing by.
Mark and his son Sam, the youngest Challenger, were soon passed in an excellent camping spot (who said it was hard to camp up here?) then we stopped for a chat with Colin Tock. He has kept his wife busy - apart from the boots saga his stove broke and she had to track him down with a replacement.

The 'Spot' gadget that Colin and four others are testing was not used for that!
And we later found Roger at Tarfside so his is intact.
But one of the testers got appendicitis and used his 'Spot'. Apparently he was rescued within 2 hours from an obscure place with no phone signal.

After passing the Bad Penny and reaching Shielin of Mark bothy, we enjoyed a brew with the Parasitic Challenger, along with Phil East and Dave Catanach. It was lovely and sunny, but encroaching cloud dulled the rest of the day. 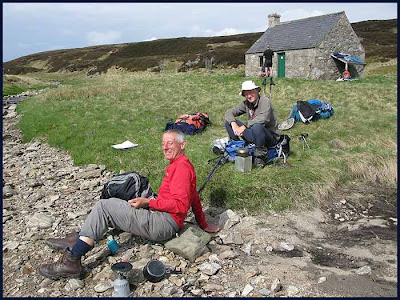 Jeff Rowe at Shielin of Mark (above) and Tom Hume looking for his shadow (below)
aka the Parasitic Challenger, and The Bad Penny 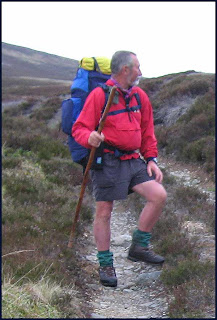 We enjoyed some smoked oysters for lunch in Glen Lee, and chatted to John Jocys at length in his bijou lunch spot at the end of the loch. 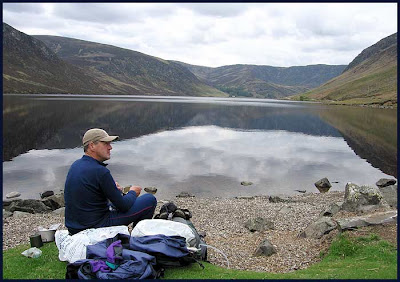 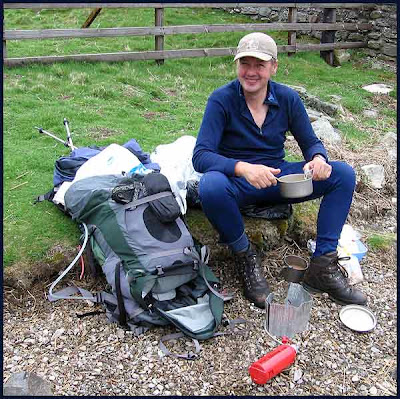 Strolling on, we passed a castle - a posh new one and this ruined old one - and the last of the fading daffodils. 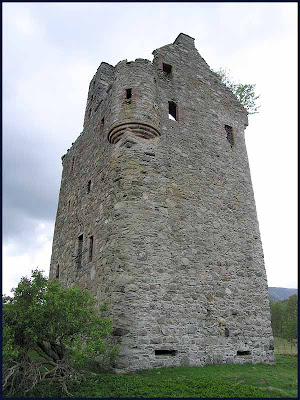 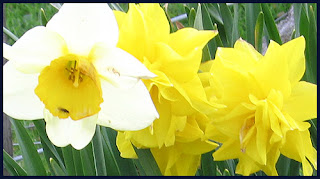 Then it was over the top (less than 150 metres ascent actually) catching up novice Challengers Bill Devine and Jim Harris on the way to Tarfside, where we are now camped with many other Challengers. (The picture was taken before most of them arrived.) There must be 60+ tents, with others staying at St Droston's Lodge, around the corner.

This is a social focal point of the Challenge.

It was great to find Ian Shiel in good form after some serious back problems nearly prevented his participation this year.

St Drostan's is a place of character. We enjoyed a baked potato there after having our camp starter of pasta and tuna, so we were well fed today. They had 4 sittings of 12 people each. 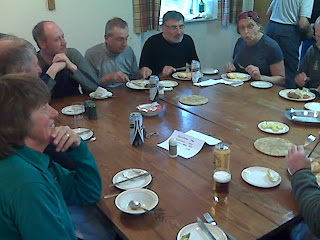 Alan Sloman (pictured relaxing at the table) was on hand to rope in his chosen victims for washing up duties that were needed as a continuous process.

Many others obtained food from The Retreat, a mile down the road, but they came to the camp site to take orders and delivered the food later to the tents, which are actually in the Sports Field - this is not a proper camp site.

Then nearly everyone partied the night away in 'The Mason's Arms'.
Many folk crammed into a small room with a roaring fire, and a sing song led by 'Croydon' - Mick Hopkins, on his 10th Challenge.

Amongst all this, Sue found time to give Denis Pidgeon a foot massage!

Next day: Day 13
Plan
Report
Back to Index