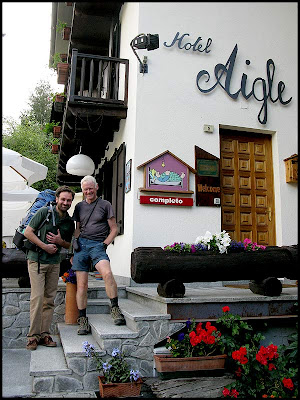 Outside Hotel Aigle with Alessandro, my new porter (in his dreams - he was very jealous of our trip)
Plan: Day 46 - Courmayeur to Rif W Bonatti - 13 km, 1600 metres ascent, 7 hours.

Best bit: A fine traverse ending in a great rifugio, where our bedroom window looks out to the Grandes Jorasses, gleaming in the evening sun.

We were strolling along Mont de la Saxe before Nicholas's warning came to mind.
'You'll find yourselves in a string of ants - a daily procession between the huts.'
True - the ridge ahead did give that impression, but in truth we probably saw fewer people today than we may have done in the Lake District. It wasn't a problem.

We had started at 9.20 after much hugging and handshaking with our excellent host - hello Alessandro - the Hotel Aigle had been a great place to visit and we do hope to return.

Breakfast had been special - home made marmalade for the first time since we left home. Alessandro's creation, as was the tasty proscuitio.

Morning showers were predicted but we have grown immune to such gloomy messages and set off confidently in t-shirts and shorts, as usual.

Our luck with the weather had been brought home by a tale from Alessandro about a friend of his who after leaving college took time out to walk from Ventimiglia to Trieste (roughly our ultimate aim). It took him 80 days, on 40 of which it rained. I hope he didn't use Asolo boots!

We took Alessandro's advice and headed off up Val Ferret, soon joining path 32 and winding up through pleasant woodland with harebells and mushrooms to join the TMB clockwise path to Rif Bertone. We were moving quickly after all the 'carbs' we had infused over the previous 36 hours. My ascent monitor even crept up to 13 metres/minute! 7 is the norm. Having just dispatched a kilogram of maps etc home, and not wishing to acquire any of the pantry, I quickly slowed to match my porter's pace!

I paused to send a message showing the traditional roofs we have encountered during the entire route.

Fuelled with fanta and coffee, we launched ourselves from Bertone, imitating the swooping swifts as we passed a rude French group of day walkers who declined to acknowledge our existence. Most folk move aside when we lumber up behind them, greetings are exchanged, often we have a chat with them (in a rudimentary sort of way). This lot were like a slow juggernaut hogging a motorway.

No matter, we found a lovely spot underlooking Grandes Jorasses, for a lunch involving fig and nut bread - a new one on me, but tasty.

Then it was on along the pleasant crest with the fine views and 'marching ants' to our 11th summit - Tête della Tronche (2584 metres) - for more fine views, though sadly today the Mont Blanc massif did have a bit of cloud on it.

Other than a few metres in the Monte Viso area, this section from the Bertone to the Bonatti rifugios is the only part of our entire route that we have walked before. That was in the lovely September of 2000. Today compared well, if not being quite up to that wonderful September day when there was just a handful of people rattling around Rifugio Bonatti.

After the little summit and a stroll down to Col Sapin, we left most of the TMB brigade to take the Armina route to Bonatti, whilst we continued over another col to descend by the Malatrà valley. Snow finches, ravens, and a flock of several hundred chirruping choughs all failed to disturb a fat old chamois lazing nearby.

The Malatrà valley was home to clumps of yellow mountain saxifrage, which soon gave way to meadows full of purple gentians.

Then it was the relaxed and friendly environment of Rifugio W Bonatti, where we have enjoyed another excellent meal, in the company of new friends.

Here's a message I sent earlier from here.