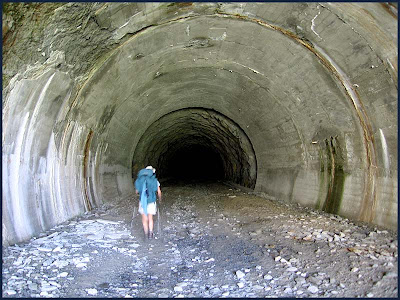 The tunnel above Pont

Best bit: Clear views of Gran Paradiso and its glaciers.

The blue sky returned today to provide us with another wonderful day in the mountains.

Being simple people with limited faculties we chose (you guessed it) the 'blank on the map' route. Anyway, it wasn't blank on OUR map.

The path was deserted apart from an elderly couple. It went through a tunnel that could have accommodated two way traffic. It then contoured up to 2760 metres on a gradient so easy that it was positively lazy.

On the way we enjoyed a rare morning brew with a fine view of climbers descending from their exertions on Gran Paradiso. (Here's the message we sent from the col above here.)

The descent on a brilliant path to a small lake saw our first encounters of the day - a French group, as usual in Gran Paradiso. The French seem to have a monopoly of this Park, and the Germans have all but disappeared.

Today we enjoyed a grand resurgence of flowers and birds. It was a gentian and chough day, and much more.

By the lake we joined the Alta Via della Valle d'Aosta No 2 (AV2) for the first time. It led us easily up to Lac Noir, a very pretty spot full of fish with reddish fins, for lunch.

AV2 then whisked us up to a 3000 metre pass - Col di Entrelor (here's the message we sent with the new view) before depositing us in the Rhêmes valley. On the way down we met two men bombing up the path. The leader appeared to be dressed only in loose underpants, his vitals flapping in the breeze. They soon flew past again, utilising gravity whilst we paused to watch a herd of 30 or so chamois lazing in the valley below. It was a hot day. Alessandro (hello) and his friend were training for a Tour of Mont Blanc race at the end of the month. He hopes to do it in 29 hours. It took us nearly two weeks! Let us know how you get on, Alessandro!

Reaching the valley at 5pm, we secured essential provisions in the nice little village of Rhêmes-Notre-Dame before plodding off to the camp site we had booked from Torre Pellice.

It closed three years ago!

The booking data was retrieved from the depths of my rucksack. It was the Vulpot/Usseglio problem in reverse - we were booked into another camp site about 12 km down the valley.

We hadn't thought we'd need our thumbs again, and feared the worst after Silvano had told us 'you have been very lucky, Italians are afraid to stop to give strangers lifts'.

It took a while for the first car to pass us that had any space in it. We jumped eagerly into the back of Enrico's Fiat and chatted to him about our journey as we sped down the valley. Another friendly and considerate Italian, this gent being from near Milan.

The 'Camp Reception' was expecting us and greeted us warmly. We have a nice pitch on the full site, directions to a restaurant, and a bus stop for the morning, hot showers, etc.

The camp site appears to be a distant suburb of Amsterdam. It's noticeable how different nationalities seem to flock together - Germans on the GTA, French in Gran Paradiso, Dutch in Val di Rhêmes Camp Site.

A 'quick turnaround' got us to 'Le Solitaire', just in time to get a table (after a little confusion) and a meal from the small menu. It was fine, but this restaurant has an easy customer base (the camp site) and lacks a competitor, and it shows.

Then we strolled around the pretty village, bumped into Alessandro, now smartly clothed, and went to bed.