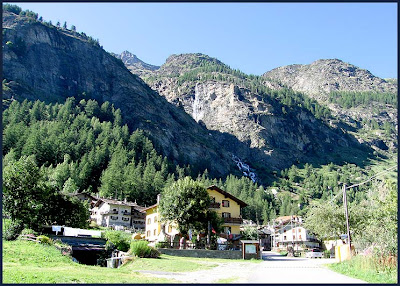 Planaval, with our hotel in the foreground

We nearly had to use our thumbs again after repeating our habit of standing in the wrong place for the bus, and it was after 9 am when we eventually set off in the sunshine from Rhêmes-Notre-Dame.

The sky was as deep a blue as we've seen it. Grasshoppers clicked and whirred as we strolled through alpine meadows, the houses and the bustle of the Sunday market soon looking like a model village far below. I paused to send this message to those enduring the wet English summer.

Putting one foot in front of the other up the steep hillside, I cogitated on Enrico's comments yesterday:
'Italian Border Route - yes, it would be great to continue beyond Macugnaga and Saas Fee.'
Good man, Enrico, though I think your suggestion that we could finish in Trieste 'next year' may be just a little optimistic!

The climb up to Col Fenêtre - 2840 metres - was steep. There was a sprinkling of other folk, mostly French. The French are easily identified - they generally can't say 'buongiorno', replying 'bonjour' to any such greeting, if not remaining silent. But Christian and Maryse were very chatty in their strange accents; we should have asked them where they come from in France. Hello C and M, it was a pleasure to meet you.

Also on the way up we bumped into a Scottish lady - the first person from the UK that we had encountered 'on the hill' in over 200 hours of walking.

This was our steepest ascent yet - a real test for the calf muscles. One of Sue's failed the test.

The reward was a fine view back to Gran Paradiso, where descending summiteers seemed to have made a huge wide groove in the snow, and ahead to the massive white dome of Mont Blanc. We hope Don and Liz have chosen a day like this for their attempt on that summit.

The wide meadows of the Epée valley lay before us, and we easily found a superb lunch spot at 2600 metres beside a busy stream. The air was warm and dry, so we gave the tent a good airing as it won't be used for a while, and it looks to have a few spots of mildew from its hot sweaty days in my porter's rucksack.

From this idyllic lunch spot it was an easy stroll to the bustle of Rifugio Chalet de l'Epée, where about 100 chatty Italians were enjoying their own frenzied lunches.

We loaded up with water and moved rapidly on (here's my porter/chef, steaming along the path towards Valgrisenche), following the yellow triangles with a number 2 that signify the AV2 route. It soon left the line shown on our map and descended in silence through cooler pine woods to the pretty village of Valgrisenche.

Only a buzzing helicopter and huge numbers of Italian children at Summer Camp interfered with our peaceful Sunday afternoon.

It was hot. 30C+. We were tiring, in need of a rest. A range of Ritter Sport yogurt flavoured chocolate was employed to revive my porter.

AV2 signs, some placed in obscure positions, guided us on. The sky remained brilliantly blue. A huge waterfall below the hidden glaciers to the west disappeared into the mountain - stolen for some nefarious purpose - leaving just a trickle to reach the valley.

Hotel Paramont is actually marked on the map, but would it be in the position shown? A reassuring sign showed 600 metres to go, and 'Piatti Tipici' - that was a good sign, and accurate.

So here we are, in the luxurious Hotel Paramont, enjoying 'Piatti Tipici' with Nicholas, a retired linguist from Constance. (Another German who seeks to avoid both Germans and large groups whilst trekking.)

On the next table is a large French guided group. (Nicholas has failed!)

Our clothes are washed and on the line, thanks to the most helpful proprietor of this fine establishment. The beer has been drunk and the wine is on the table.

The sky is blue.

My porter's stomach has been replenished.

All is well with the world.