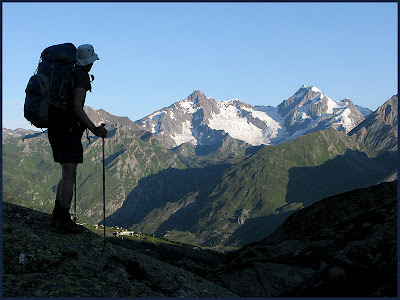 Last night's meal was fine, and really piping hot. Sergio, the guardian at Deffeyes, is hampered by having 72 beds but only 40 chairs downstairs. So I suppose it was fair enough to eat later, and the food was good. But it was an impersonal place last night, with everyone tending to their own affairs.

Wandering around outside the rifugio on the warm evening, I noticed a small chapel a few hundred metres away. Some older children were outside, being addressed by a priest in long flowing white robes. After the service they ran noisily back along the frog laden path for their meal.

Outside the rifugio was the usual array of yellow signposts, plus a large one in four languages that we hadn't seen before:

We had apparently achieved the impossible, but nobody was interested.
(More likely, the sign was erected by a gang of Italian health and safety people running amok!)

There was a lovely sunset, with alpenglow.

Today we were up and away, full of stale bread with jam, and poorly constructed coffee, before the main rush for breakfast. This rifugio would be the high point for most of the it's occupants, who would have all day to return to the valley. We met many day walkers as we came down.

The clear morning brought superb views of Mont Blanc before it clouded over as we approached la Thuile. Here, after our pleasant walk down the AV2 path, we found a good café and a shop for lunch provisions before heading off up path 13, past a big adder, towards Col d'Arp.

The long ascent was gentle and well graded, but obviously not in many walks books. We saw just two walkers, not on our path, and a few farmers.

Willow-leaved gentians with bright blue flowers made a first appearance for us, and small yellow foxgloves reappeared in profusion. The view back to la Thuile was marred for a while by huge power cables.

Moths, butterflies and grasshoppers flapped and hopped along with us as we gently ascended a deserted tarmac lane edged by a plethora of colourful meadow flowers.

After leaving the tarmac we continued up easily to a good lunch spot which afforded us fine views back to the Rutor Glacier beside which we had walked yesterday. The valley seemed grey and it had spotted with rain that had strayed from a shower in France. We weren't fooled this time - no waterproofs were needed and soon the sun tan cream was back in demand.

Lunchtime had also featured some news bulletins from Notchy, who it seems is marooned at home with only beach volleyball for entertainment until his dentist returns from holiday.

Col d'Arp was a fine viewpoint. We had our own private patch of blue sky, cloud having infiltrated elsewhere. We lingered amongst the alpine fleabane and snow gentians whilst a golden eagle soared above us. The shrieking marmots went very quiet! Views towards the Mont Blanc massif, and our ongoing route close to the Swiss border, were excellent despite the cloud cover.

After a while on the well graded descent on path 1a we got our first sight of the metropolis of Courmayeur, the biggest town we will pass through on our entire trip. It looked Big. Great yellow gentians and then succulent strawberries and enticing looking mushrooms distracted us as we wound our way slowly down through pleasant woods. We recalled our descent on the Tour of Mont Blanc (TMB) in 2000. That was an unpleasant affair, partly down a ski piste. This deserted path was much better.

The pretty village of Dolonne was reached at 4.40 but it took more than a further hour to get to this nice hotel in Entrèves that Nick had so cleverly located for us.

Alessandro greeted us warmly and generously provided large pieces of chocolate cake to go with my large Moretti and Sue's English Breakfast tea.

We enjoyed dinner next to two English couples who had spotted the menu whilst out for a walk. 'The best meal we've had in ten days in the area', they enthused.

It was indeed an excellent way to conclude another fine day in the mountains.