It’s always a good title - ‘A Blue Sky Day’, and it certainly was just that today.

It was cold again – about the same as yesterday – around minus 20C plus wind chill.  So we set off late, to P6 – the MacKenzie-King car park.  This gives easy access to the Champlain Parkway, a wide, undulating, well groomed ski trail that after about 10 km reaches the Champlain Lookout.

Today we hastened on from the Lookout to Huron Cabin for lunch – it was surprisingly quiet for a Saturday in the middle of the skiing season.  I think the cold weather puts off the vast majority of people.  But it didn’t put off this Man with Three Hats. 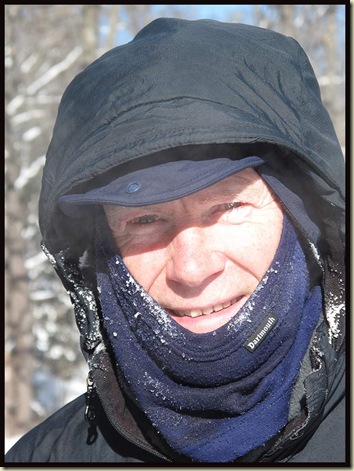 The Chickadees were actively rummaging around in the seeds, though I still can’t get a good picture of one.  This is my best effort to date. 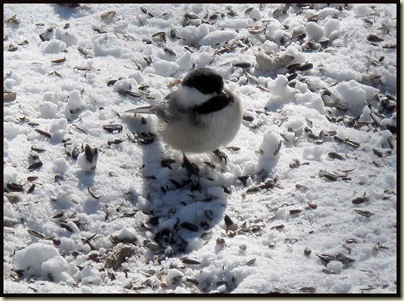 The return to P6 was quite speedy until Helen demanded “more wax!”, so a pit stop was made on the sunny trail.  But you soon cool down at –20C! Tonight it’s the Canoe Club’s annual Skating Party – a Canoe Club get together in their enforced close season.  They go skating whilst I wander along the banks of the canal – skating being neither of my talents!  Then we adjourn to Catherine’s house for a sumptuous feast to which everyone contributes a dish.  I’ve contributed the cream on top of a trifle!  Here are some ‘likely suspects’ enjoying last year’s party. 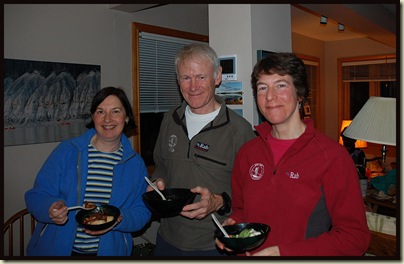