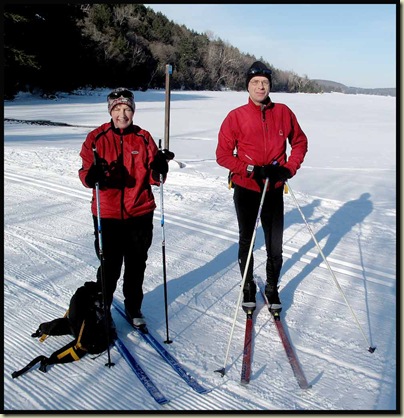 “Where’s Martin?” someone asked.  Yes John, I spent hours and hours trying to find Willie with my children, so I wouldn’t want to waste anyone else’s valuable time doing that – though I do seem to recall it being quite fun.

I’m staying in Ottawa with my good friends and hosts, Ken and Helen, pictured above at the end of Lac Philippe on today’s 22 km ski in Gatineau Park to Healey Cabin and back.

Freezing rain was forecast later so we got going fairly early and were on trail 50 by soon after 9 o’ clock.  It was cool but clear – probably around minus 5-10C plus a bit of wind chill.  Anyway, it took about 40 minutes for my hands to warm up properly.

We reached Healey Cabin, on the site of which the Healey family farmed until 1955, at 10.40.  It was a little early for elevenses.  So we had lunch. 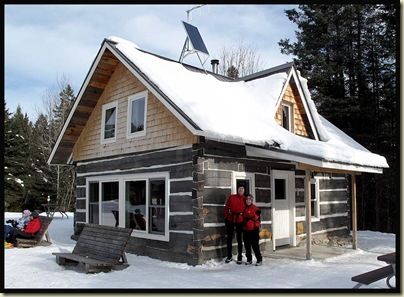 The ski back to P19 (Parking Lot No 19) was very pleasant (especially with now toasty hands), and we returned in the company of day visitors and heavily laden folk going home from their weekend based in one of the cabins or yurts hereabouts where you can stay overnight.

It gradually clouded over, so the early start was justified, but by late afternoon (now) the freezing rain had still not arrived.  Weather forecasts here are nearly as accurate as those we get in the UK.  Enough said!

Today’s highlight was the sight of an ermine, a type of weasel – Mustela erminea, going about its business quite oblivious of us.  It crossed the track ahead, shot up a tree and into a hole, then a while later reappeared, shot down the tree and on its way across the snow.  It was too quick for my limited camera skills, so I’m afraid you’ll have to make do with this blurry image. 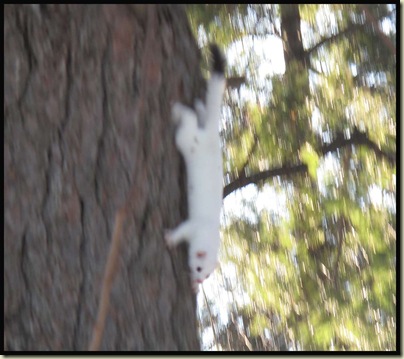 It has occured to me that you get about a bit. Looks like fun and with wildlife too!

Waited for years to put that in a post :-)

I like it Phil, but the fact remains that this is a weasel - Mustela erminea - according to all the local (to Gatineau Park) literature. The black tip is thought to be an anti-predator device, drawing the aim of a striking hawk or owl away from the snaking body.

Jamie - I did your commute (or similar) for 33 years! And believe it or not I enjoyed going to work (mostly), but not as much as I now enjoy not going to work!

You are probably right, though.

Aye you've got to see one side of life to appreciate the other I suppose!