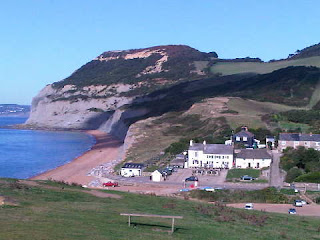 Just a brief entry for now, as we return home tonight and I can't do this whilst driving.

After another good breakfast, we set off on a blue sky day, so the waterproofs were deployed for just five minutes of this four day excursion.

Today's hills were small and early on, so presented no difficulties.

Then, after passing under the geologically remarkable and visibly crumbling East Cliff, I went over and Notchy went around Burton Cliffs.

We hit the beaches, backed not by cliffs but by gently rising arable land; any cliffs hereabouts having been eroded away aeons ago. These must have been prime targets for foreign invaders in days past (as evidenced by numerous pill boxes). First, Burton Beach, then Cogden Beach, before we headed around unseen Burton Mere and along a long section of beach prior to turning inland to the posh town of Abbotsbury (reminding me of the Cotswolds with all its thatched cottages), and our 3.30pm taxi back to Exeter.

As usual, the folk we encountered today were almost all retired. It's still holiday season, and most B&Bs are fully booked. "It's all the grandparents, taking a break from child minding now the kids are back at school" commented one proprietor.

Mind you, many of the folk we've seen look as if they need their own minders!

We've also seen a few younger backpackers. Wild camping appears to be the favoured approach, due to the high cost of campsites and the cleansing properties of the sea.

Today's picture was taken early on - it's the view back to Seatown and Golden Cap.

Sent using BlackBerry® from Orange
Posted by Phreerunner at 15:41

Just logged into your blog linking from Mick and Gayle. your photos are very sharp and clear. Any secrets?

Sorry for posting the same comment twice. I had only looked at your photos on the blog and have now had a look at full screen size, and as you predict pixelation is rampant.

I am so used to taking photos with my camera that I find it a faff (to use one of Gayle's favourite words) to also take photos with the iPhone for posting on the blog. If I do, I then find that I have the most desirable photo on the iPhone at inferior quality. Of course this problem only arises on multi-day walks when I am not able to download photos from the camera.

The Blackberry pictures do look fine on the Blackberry screen. And they do serve a purpose - but I use the G10 or Ixus 105 as well, and sometimes swap the images when I get home (not yet done re this trip).
I'm not a 'photographer', so my images tend to try to convey the 'flavour' of the day, or illustrate a walk, etc, rather than attempt any particular artistic quality - though it is sometimes fun to play around with the G10 images. I wish I had the technical skills to match that camera's performance!

Hi Martin,
Just catching up (behind with everything, as ever). I was listening to Radcliffe and MacConie walking a similar bit of the SWCP last week. I really like the idea of a piecemeal approach - I daydream that in a few years the kids might be enticed to do it with me.