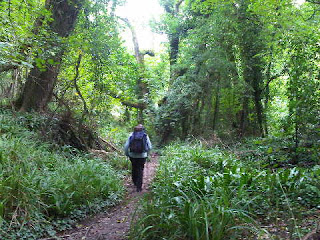 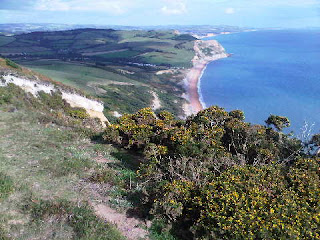 After Notchy's early morning Light and Sound Show, and a fine breakfast from Gaynor, another 9am start, and we were soon crossing the oldest, but not very picturesque, concrete bridge in England. Up a hill past a golf club where dire warnings gave the impression that if one's car was lucky enough to evade being clamped, it was highly likely to be stolen.

Soon afterwards, more dire warnings, this time the gist being 'it's a long and bumpy muddy way to Lyme Regis with no escape routes so think carefully before you tackle this path'.

This was the Axmouth-Lyme Regis Undercliff, a 304 hectare National Nature Reserve. Several miles (with no escape) of lovely deciduous woodland with lots of ferns, broomrape and pheasants. It reminded me of the rain forests in New Zealand, with ivy instead of mosses and lichens, it being much dryer here. The whole area was created by a massive landslip in C19, following which it became a mecca for Victorian sightseers.

Today's first image was taken in this woodland. A visit to Chimney Rock looked as if it would yield scenic views, but I left that until next time and pressed on in Notchy's anxious wake.

Towards Lyme Regis we met various folk engaged in short forays into the wood, and by 1pm we had reached that town. I enjoyed coffee and a pastie at The Old Boathouse on the seafront, whilst Notchy preferred to seek out Tesco for his supplies.

Reunited on the long path to Charmouth, diverted due to a landslip and unable to follow the beach due to high tide, we slogged through another golf course and along minor roads to reach this sunny haven.

From Charmouth, more undulating ground, past dog walkers (including a swallow chasing labrador) and a man with a basket containing a mushroom (it filled the basket), then a steep path led to the summit of Golden Cap. A sun-drenched spot where we lingered for a while admiring the view in today's second image.

The final descent to Bay Tree House (www.baytreechideock.co.uk) in the historic village of Chideock, was down an ancient sunken lane. It was 5pm. Time for cream teas, which luckily are served by Sarah, our host at Bay Tree House.

Then it was off to the George for a meal. Did we really need those cream teas?

Meanwhile, Baz Gray spent the whole day moving slowly towards Poole, completing his epic 176 mile run along the coast path at 6.30pm, over 50 hours after starting his mammoth effort a couple of days ago. Brilliant.

Just tuned into your blog linking from Mick and Gayle. Your photos are sharp and clear. Any secrets?

'Sharp and clear'!!!
I don't think so, you must be displaying them so as not to fill the screen.
The images sent by 'phone are at the lowest resolution setting on the Blackberry, generally 20-30Kb.
The images loaded from our home computer are around 100-150Kb, but Blogger may adjust these sizes anyway. It's all a bit technical for me. Better sized images (approx 1600x1200 pixels) are those that readers can link to for slide shows. There should be a link to the SWCP slide show later today. Those images should be fairly sharp.