Saturday 11 September 2010 – The Langley 11 – and a Slight Misunderstanding 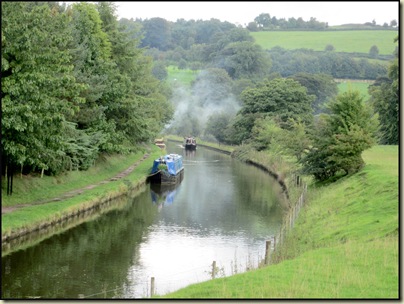 It’s always good to catch up with old friends.  Alan and I worked, for different firms, on the same cases in years past, with happy outcomes despite the occasional attentions from dodgy directors and Private Eye.

“Fancy lunch in town?” I suggested.

“It’s the Langley 11 on Saturday” came the reply “how about it?”

I wasn’t sure.  I Googled ‘Langley 11’.  Just one result – from Buxton and District Athletic Club. (See below*)

So, it was a run.  “I’m not running fit” I responded.  “Nor me, I’ll be walking” came the reply.
We duly met, ticketless, at St. Dunstan at 10.30 am.  I’d passed the pub on my way to Alan’s house.  There was no traffic.  So we were taking part in an event that had been sold out, to which I was the only motorised arrival. [Suspicious!]

A suitable donation gained us access to the pub and to bacon butties and coffee.  About 100 people were milling around.  There were 100 tickets, sold out weeks ago, the limit being dictated by available space in the pub and by catering constraints.  This local event has no ‘web’ presence - “there’s no need, it always sells out” explained Richard and Pauline, of St. Dunstan.

Those with tickets had to get them stamped as they went round the route, which was not quite that detailed in the text below (the one below is better).  They would then qualify for various goodies en route and food at St. Dunstan from 6pm.

We freely admit, we cheated.  Next time perhaps we’ll do it properly.  This time we were, in any event, interlopers (albeit welcomed as such).  Besides, I had a car and didn’t want to finish up in the cells.  So we cheated.

It was showery, so we got a bit wet.  We took 4½ hours, just a brisk walking pace with a stop for refreshments at The Crag.  It was about 22 km, with 600 metres ascent, and Naismith would have taken an hour longer, so we were happy with our pace.

But we’d completely missed the point (or should that be ‘pint’) of this event.  We’d thoroughly cheated.  If Richard and Pauline hadn’t been so polite, they’d have laid into us.  As it was we did enjoy a pint in the last pub (St. Dunstan) whilst Richard explained that he had just collected vats of chilli, curry, etc, from the other ten establishments, by way of their contributions to the event, to be served after 6pm.

I should point out here that St. Dunstan is a real ‘walkers’ pub’, where walkers always receive a warm welcome and good beer.  There is no need to secrete your butties under the table here.  “Bring your own food and eat it inside” say Richard and Pauline.

There’s a pictorial representation of the route here (27 images); as I write this, some of those taking part are probably still stumbling from point to point.

Here’s a taster from that Album, which includes one or two other items of interest. 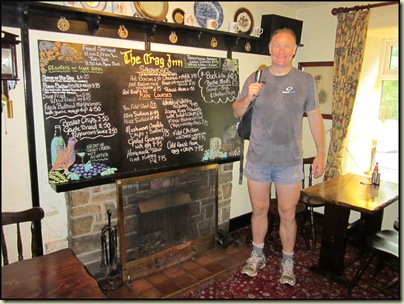 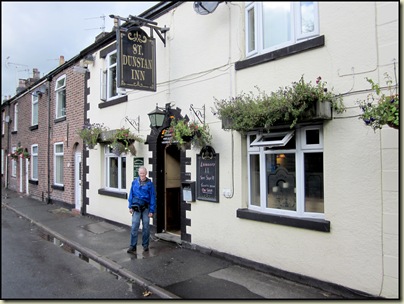 And here’s the route we took. 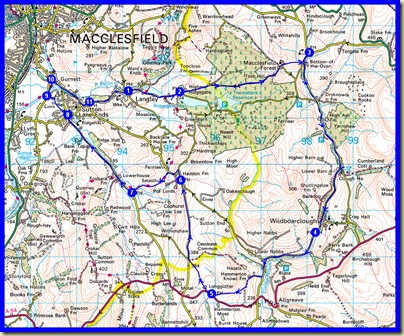 *“Good xmas run route perhaps ? Goes past various pubs in Langley, Sutton area.
Leave St Dunstan, Langley (1).
Up road to Leather’s Smithy (2).
Follow Forest Five route to Forest Chapel then down the stony track to Stanley Arms (3).
Could use road for next section but I suggest back up to Standing Stone and over Buxtor Hill, then drop down to Crag (4) from Shutlingsloe path.
Carry on down road for 1.25 miles then up path to Hammerton Knowl Farm and across fields to Wildboar (5). This is the only place where navigation skills are called into action. The clue is heading left for the wall corner from the bend in the farm track when level with the second farm.
Up the A54 for 200metres then right through Longgutter Farm and up to top road and along ridge to Hanging Gate (6).
Down steps past the toilets and down to road. Use either of next twp paths on left to drop down fields to Ryles (7).
Along road the the Lamb(8) in Sutton, the go on past war memorial and take muddy little path left beside the stream and over the fields to farm and Bullocks Lane and Sutton Hall (9).
Back to Bullocks Lane and towpath along canal for 300 metres then down steps to Old King’s Head (10).
Under canal, fork left along Jarman to Church House (11) and on to St Dunstan (1).
14 miles for the 11.”
Posted by Phreerunner at 16:40

Perfect Challenge Training, by the sound of it?

Good to hear from you, Alan. It would have been excellent Challenge Training if we'd realised we were supposed to call in at each establishment for 'Medical Supplies'!