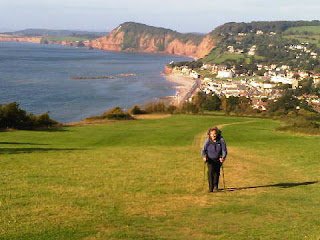 After yesterday's gloom and overnight rain, we woke to blue skies and a warm north westerly breeze. Breakfast was marred only by our host (David - not Dave) calling Notchy 'Andy', which those who know my dear companion may well recognise is a heinous crime!

By 9am we were busy negotiating our way to Tesco and then across the ford and up the hill to rejoin the coast path. Today's image is the view back, from the hill out of Sidmouth.

Shortly after this we were passed by a couple of runners. They were Royal Marines doing their 22 mile relay section of an 88 mile course from their base at Lympstone, near Exeter, to Poole. "You won't see anyone else, except for Baz, because we are the last of quite a few teams" one of them explained, kindly slowing to a strolling pace to protect my legs from undue exercise.

Then we met Baz, coming the other way, with a small entourage of ridiculously fit looking Marines. Baz is raising money for Royal Marines Charities in order to help wounded servicemen. His isn't a 10km run, or even a half or full marathon (though I do realise that such events may be a serious challenge to many folk, and deserving of sponsorship). Baz Gray's fund raising challenge is 'running' from Poole to Lympstone and back again, a total of 176 miles. His target for this was 48 hours, but that's already slipped. I will be donating - the effort involved is absolutely phenomenal, and worthy of a few bob of my money whatever the outcome. He looked tired when we saw him, and was pleased to pause and chat. Wouldn't anyone, after 77 miles and with 99 to go? If he can keep going he will be out on the very hilly coast path for a second night tonight, and for most of tomorrow. You can follow Baz's progress (and donate if you wish) at www.176milesnonstop.org

Notchy and I meandered on towards Branscombe, which some will recall was the site of the beaching of a 62,000 tonne container ship in January 2007. The ship is now gone, but its 14 tonne anchor now sits outside the Sea Shanty tea rooms, where we enjoyed our lunch, in memory of the traumatic episode.

On the way to Branscombe I had come across Notchy (he usually goes ahead, outpacing me with ease) sitting on a bench chatting to Phil and Margaret Holmes. They had never met before, but it turned out that this jolly couple have season tickets a few rows in front of Notchy at Eastlands, home of the world's richest football team. It's a small world! We discovered that we also have mutual friends in Stockport Walking Group.

After lunch, today's short section of the coast path took us through spectacular cliff scenery with hundreds of crows, to Beer, where I enjoyed an ice cream, then on to Seaton, which lacks the ambience of Sidmouth but does have an excellent B&B, www.holmleighhouse.com where we are now happily ensconced.

The memory of today's lovely section of coast path will be dominated by red cliffs and an exhausted Marine.

We are now off to 'Monsoon', for some Indian fayre, I believe...