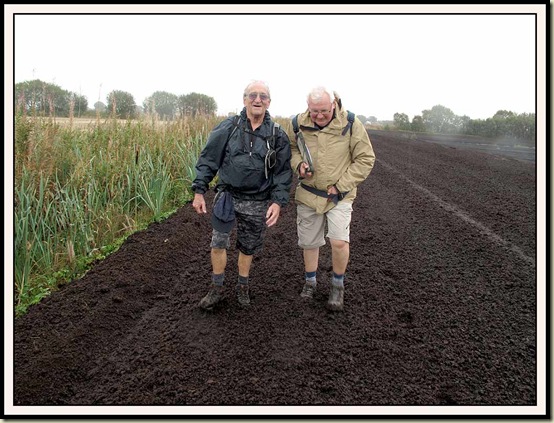 Reg had kindly offered to join me for a repeat of ‘Part 4’ of the Salford Trail, a ‘Plod’ that I’d missed earlier in the year.  I can’t find a report on the LDWA website – perhaps someone can direct me to it….
Anyway, John came along as well as Reg, on a drizzly September morning.  (I think John had been appointed to mind Reg’s wallet after a recent incident.)  Luckily the 11.00 am starting time coincided nicely with the ending of the drizzle, so soon after setting off from Irlam Station we were able to stash our waterproofs for the rest of the walk and enjoy weather that was as dry as Reg and I had recently enjoyed in Kandersteg and Turkey respectively.
Our route followed the second half of Roy Bullock’s suggested ‘Part 4 – Worsley to Cadishead’ of the ‘Salford Trail’, as described on his website.  I’ve ‘borrowed’ some of Roy’s text in the description below.
From Irlam Station we headed up the road to a church, where a left turn down a lane soon brought us to a footpath to our left through fields.  This continued west, past Rosebank Farm and on to a lane via a stile.
A turn right along the lane took us past Woolden View Farm and over the M62 Motorway, passing Birch Tree Farm, Little Haven and Ring Pit Farm.
On the way we passed some fine fields of turf and wondered whether the grass would finish up under footballers’ boots. 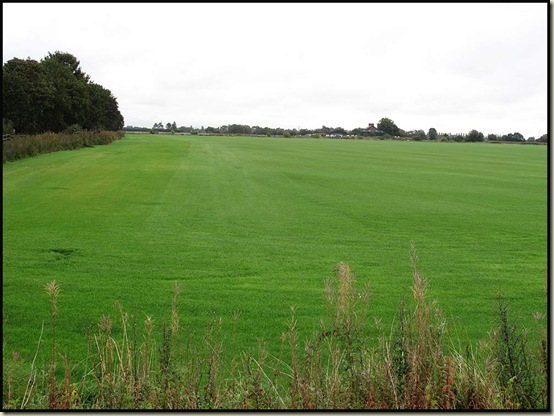 The surface became less motorable and the path continued through a wooded area. 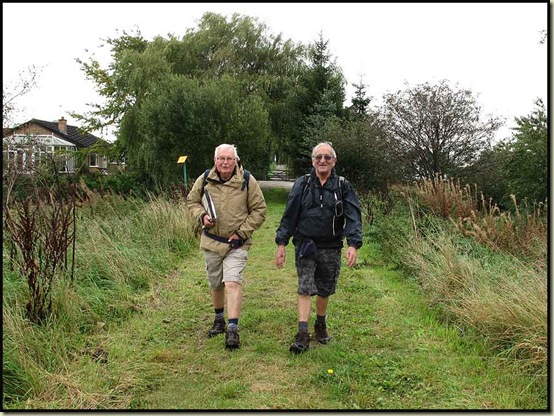 There were plenty of birds around, including a bevy of collared doves.  Reg has seen ‘twitchers’ hereabouts, so it could be home to a variety of species.  We soon emerged onto a large peat bog fringed by heather. 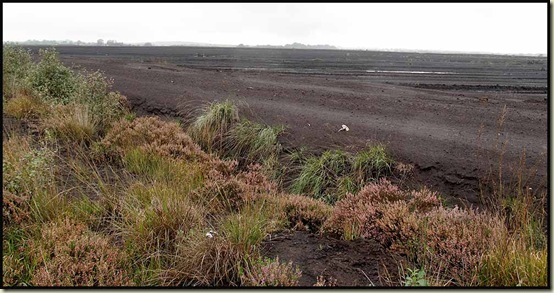 At the edge of the bog it is clearly signposted showing the pathway as turning to the right and skirting the edge of the bog to a point which is in a direct line ahead, where there is a stile. My maps show the path and right of way as a straight line over the bog, but newer maps show the new route around the outer edge of the bog. Peat extraction has eliminated the original route, and it seems that recent work has also destroyed the new path. Walking over the peat was a little arduous, with the loose ground being soft and springy, and the peat coming up to our ankles (see top picture). At least, despite recent rain, it wasn’t muddy!
Roy reports that there are ‘hares in these parts… living above ground in what is called a ‘form’, which is a small hollow in the ground. The hare digs a shallow resting hollow or "form" out of a moss hummock on the bog, which it lies in during the day. The form is dug out slightly more at one end than the other - the deeper end accommodates the hare's large and powerful hind quarters. The form is usually orientated so that the hare can sit with its back to the wind.’
We saw no hares today*, but  I did spot a certain piece of farm machinery that may be of interest to Alan R, who will no doubt provide a name and serial number (no need for the Latin name, Alan!) in due course. 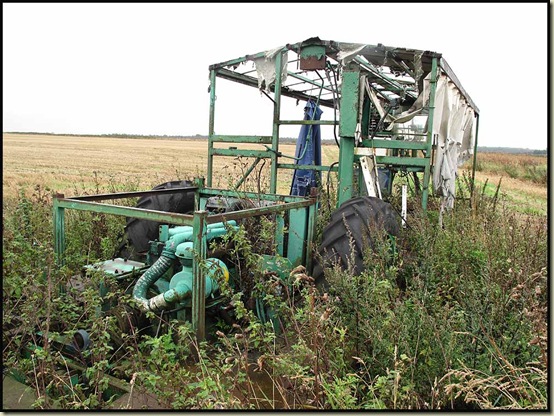 After slogging our way around the moss, we soon reached a track that passed a number of farms close together. These were Moss Lodge Farm, Red House Farm, and White Gate Farm on the right and Platt House Farm on the left. At the end of the lane a left turn took us past another farm, Moss Side Farm.   Recently planted crops were clearly benefitting from the rich soil hereabouts. 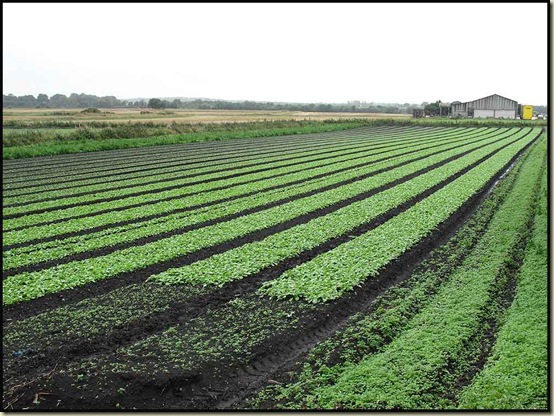 After a walk along the road, a signpost points to the right over a metal footbridge and immediately after that another signpost points to the left. This is the extreme edge of Salford at its border with Astley. We took the second path to the left, past Moss House Farm, now finding ourselves on the route of the Glazebrook Timberland Trail, an eleven mile route from Pennington Flash to Irlam, not to be confused with the Mersey Valley Timberland Trail, a 22 mile route from Runcorn to Lymm.
Time for lunch.  We all found small perches in this rather decrepit place… mine was a bit springy! 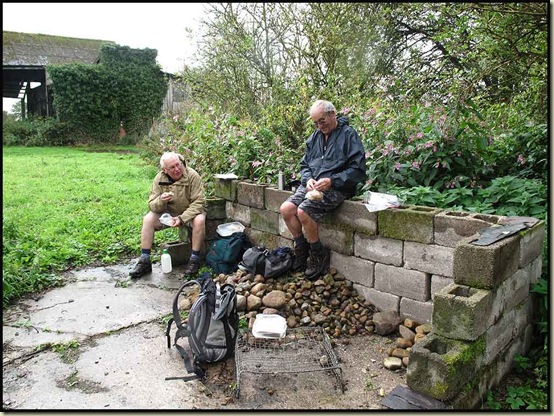 The Himalayan Balsam was starting to fade in places, but not here. 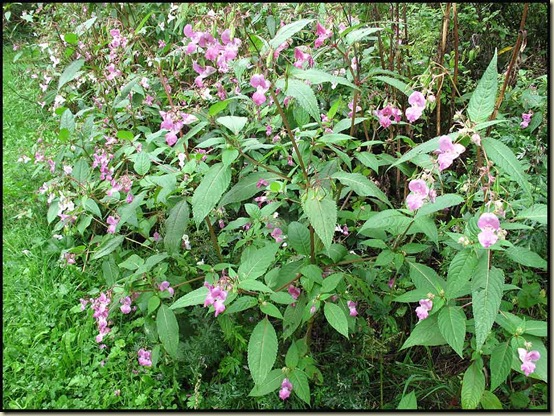 From this most scenic of lunch spots, we plodded off in a steady southish direction in improving weather, strolling parallel with Glaze Brook, across which a nearby farm had a variety of strange beasts in its garden.

Is this really Salford? 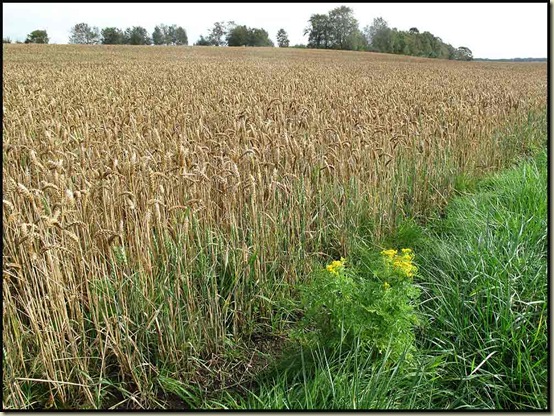 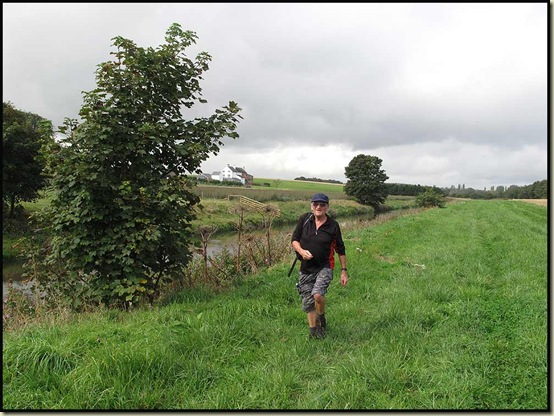 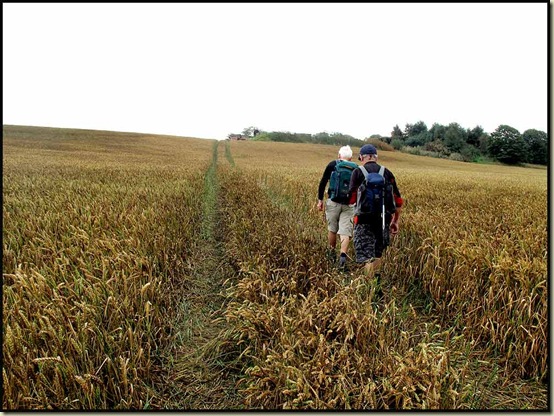 After a while we passed Little Woolden Hall, which looks rather run down, not the Salford Mansion I’d expected!  Here’s all I can find out about it:

”Little Woolden Hall has a house with a small park and a ruin on the site. It is linked by a system of tracks to brick fields and willow beds. By the late-19th-century the ruin seems to have disappeared and the area around the house was simplified in design. The associated landscape had also been greatly developed as woodland.” 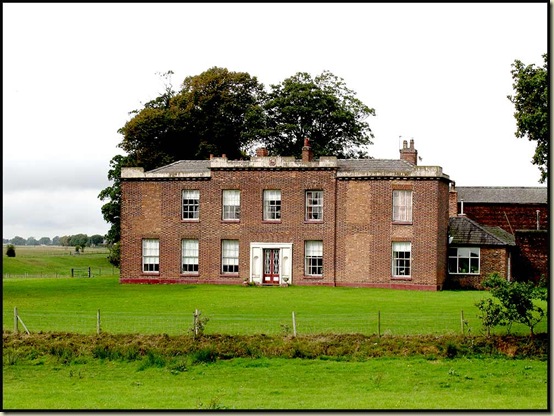 Soon after that the path re-crossed the M62 motorway and passed Great Woolden Hall Farm, though it doesn’t really look all that ‘great’.  Remarkably, this is by the site of an Iron Age ‘promontory’ fort. (Elsewhere it’s described as a ‘hillfort’, but there is not a hill in sight around here!)  It was apparently occupied in three phases during the period 500 BC to AD 200. During this period it possibly became an enclosed settlement containing stock pens and industrial sites. 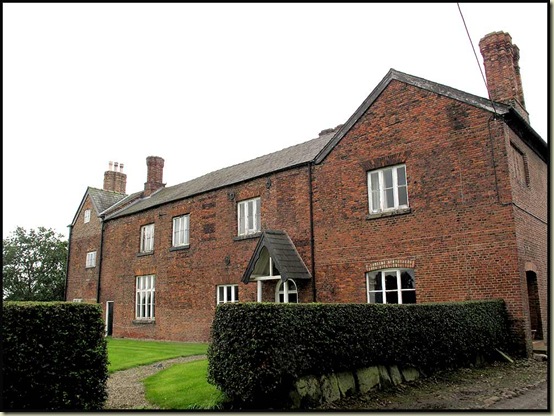 Just beyond here, a friendly horse greeted us in much the same way as on 20 December 2007, but I think it was a different animal this time! 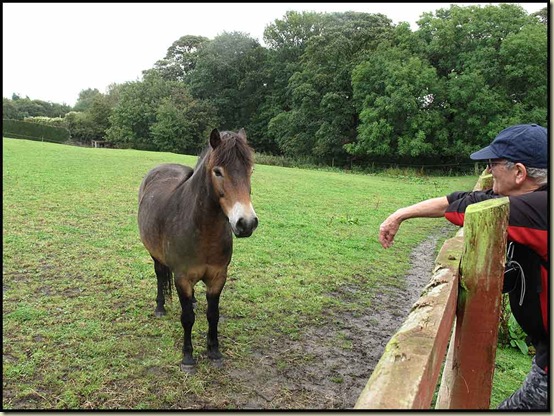 Then it was under the railway line and through open land beside the rather substantial waters of Glaze Brook. 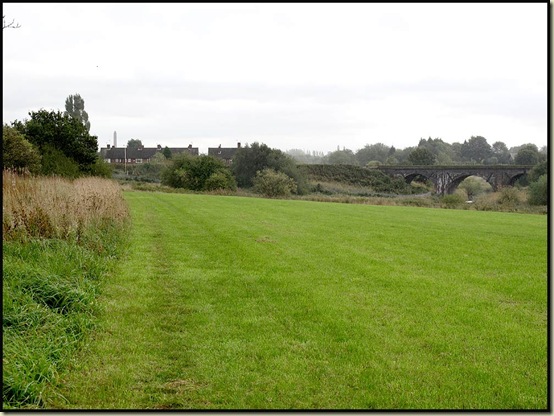 The final ginnels leading to the A57 road passed by some fine allotments, from where it was just a short walk back to Irlam Station. 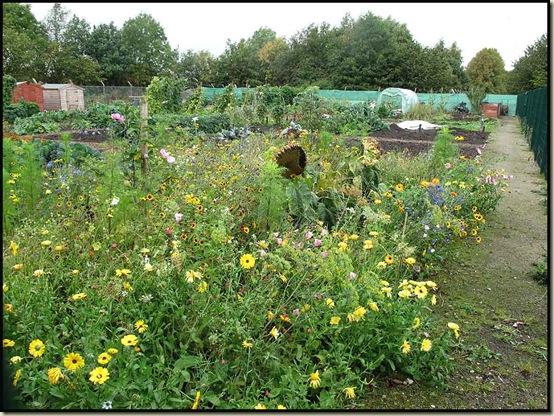 ‘Part 4’ therefore passes through some remarkably ‘countrified’ Salford landscapes, but finishes amongst industrial buildings such as  Lanstar’s waste reclamation plant, 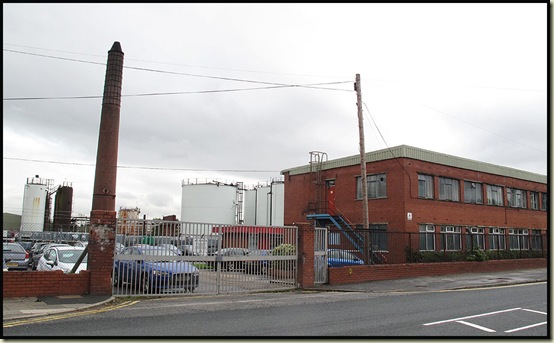 and the Royal Arms’ ABA Boxing venue, where certain Hollywood film stars have been immortalised on a small verandah. 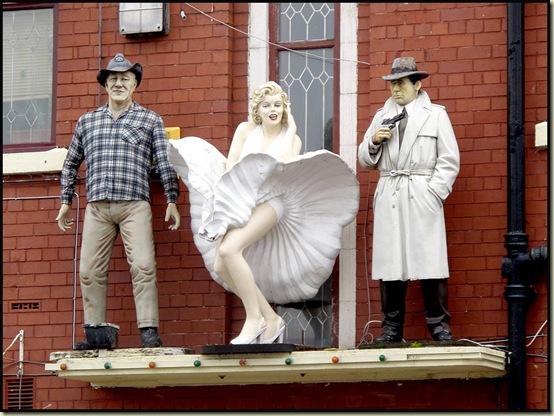 Here’s our route – approximately 15km, with 60 metres (if that!) of ascent, which took us a very leisurely 4 hours. 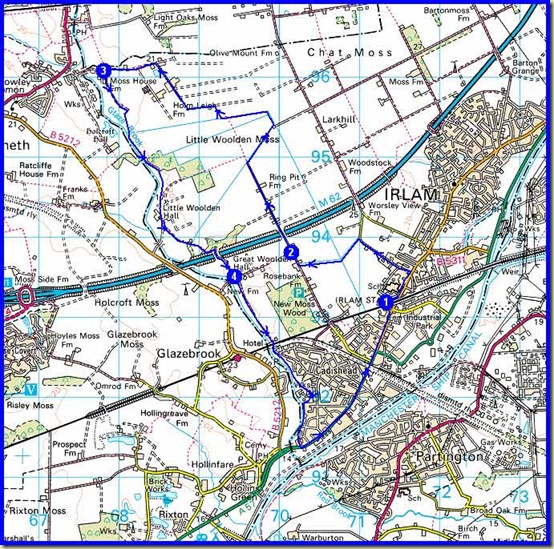 Thanks for returning to this venue, Reg, it was much appreciated.
That just leaves ‘Part 1’ for me to complete.  Links to my other Salford Trail reports are given below:
Part 2
Part 3
Part 5
*but last time I was here, I did see ‘rabbits’!
Posted by Phreerunner at 16:50

Hi Martin,
If you ever need to introduce a person to walking in Salford then this is the walk to choose.
It’s quite stunning in fact.
Again i have missed an outing. I must pull myself together.
As for the machinery, if thats what you can call it. I may be good but i’m not that good. A closer inspection and i may “Shed” some light on it

You definitely should pay the 'Antiquities of Salford' a visit, Alan...