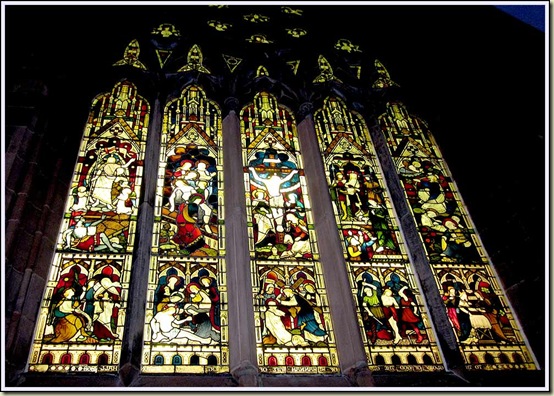 Sue and I didn’t think anyone would join us on this evening walk, which should have started in ‘just about daylight’ if it hadn’t been raining.  So after a futile rummage in the car park for unlikely participants, the two of us wandered past St Thomas’s church in Stockton Heath, by way of a ‘cut through’ to a swing bridge over the Manchester Ship Canal.

The church was lit from inside, making its stained glass windows very pretty from the graveyard.  Interestingly, we would have recognised the religious scenes from Turan’s descriptions last week of the frescos in Cappadocia, had we not already known the stories behind them.

By the time we started the walk proper, by the swing bridge over the A49, it was more or less dark, at 7.30 – the nights are drawing in! 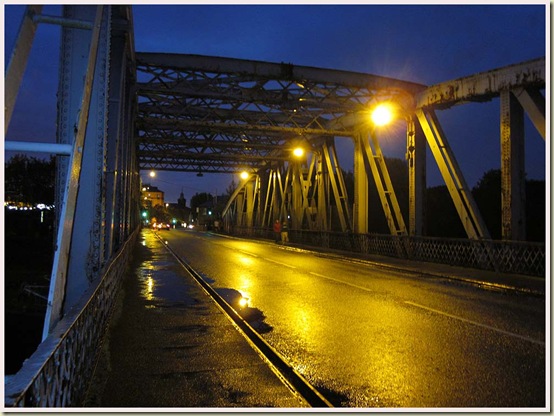 The rain had stopped and as we looked west down the arrow of the Ship Canal to the last gleam of light from the sunset, it was evident that the skies were clear over Liverpool. 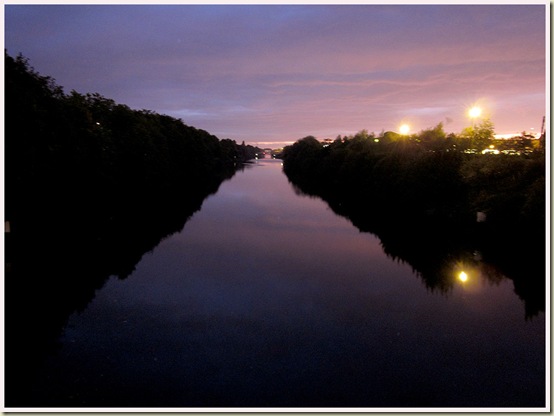 Over the bridge we turned left along the Trans Pennine Trail, a pleasant footpath that after a while turned away from the Ship Canal and its carousing swans to arrive at a bridge (Chester Road).

After crossing the bridge, we turned right down a path that leads between the River Mersey and the Runcorn to Latchford Canal, dodging puddles and bats in the darkness.

A railway bridge was soon reached, and with it an unlikely (in the dark) pedestrian footbridge over the Mersey, right next to the busy railway line, where we seemed to be cheek by jowl with the remnants of the day’s commuters.

We seemed to leave all trace of civilisation for a while as we turned left again to follow a riverside path through a heavily scented forest of Himalayan Balsam.  Before leaving the river and following the path over waste ground towards a very smart Go-Karting warehouse, we admired Crosfields’ Transporter Bridge, the only bridge of its type built for rail traffic (one truck at a time).  It was the last of its type and operated from 1916 to 1964.

This is very close to the centre of Warrington, but it took us a while to fumble our way past Bank Quay Station and along Slutchers Lane, where we turned left through the first ginnel to reach the ‘Village’ complex, beyond which another bridge over the Mersey led to a roundabout, across which we took a back lane running parallel with the A49, past an old malt kiln with diamond panes.

Soon a gap in some railings by a community centre led to a green space and an easy stroll through wet grass with starry views, to Gainsborough Road, whence a left and a right took us back to the start of the walk, and this old ‘signpost’. 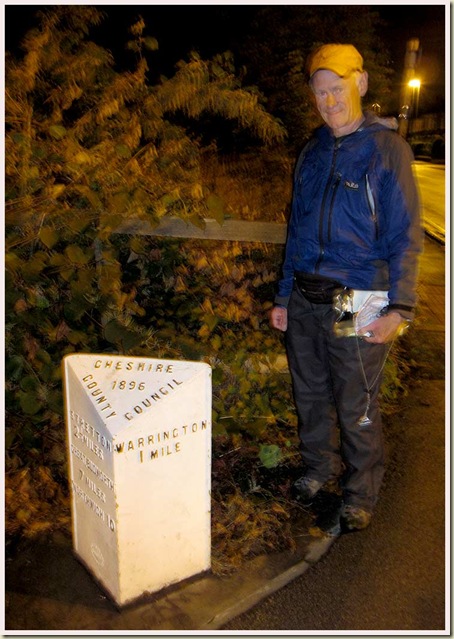 In our haste, and in the dark, we failed to notice the old terraced houses in Greenalls Avenue, built for the workers at the now defunct brewery of the same name.

Here’s our route – a mere 7 km in 1.5 hours, but a very pleasant outing in remarkably rural surroundings considering we were virtually in the centre of a large town. 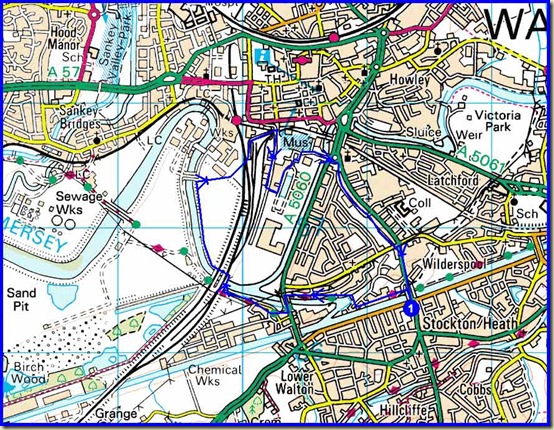 Rural walking is often more interesting than hillwalking, and this evening adventure throws a whole new perspective on photography.

I am fascinated by your Garmin statistics/map. Does all that info download from the 310XT - presumably you have some mapping software that is compatible? I would be interested to hear a bit more about this.

Hi Martin and Sue.
Sorry we couldn’t make this one. Shame really as it would have been quite easy for us to get to.
Glad you enjoyed it.

That last photo's a stunner, isn't it!

The Garmin 'gadget' does indeed download all this data, and you can simply 'embed' it in the blog or on any other website. My Anquet mapping software isn't compatible (in that I haven't worked out how to convert the Garmin .gpx files to the Anquet .arf files) but that doesn't particularly bother me for the time being.